CONCLUSION: Actions of ET-1 on collagen metabolism of HSCs may depend on the transportation of inward whole-cell calcium.

Hepatic fibrosis associated with the activation of hepatic stellate cells (HSCs), the major source of extracellular matrix (ECM) proteins[1]. It is generally believed that HSCs are the main cells producing ECM, from resting state to active myofibroblasts, which is the key point of formation and development of hepatic fibrosis[2-6]. Endothelin-1(ET-1) is currently known as a polypeptide with a stronger activity to contract blood vessel. So, based on prophase researches[7-9], we chose ET-1 to observed its direct effect on DNA ingestion and synthesis as well as collagen synthesis and secretion of HSCs in cultivating. Meanwhile, as we know that Ca2+ is an important intracellular messenger, relate to HSC proliferation and ECM synthesis[10-13]. The effects of ET-1 on regulation and intracellular [Ca2+]i of HSCs isolated and cultivated in vitro were studied.

Isolation and cultivation of rat HSCs Rat HSCs were isolated referring to Knook[14-17]. Rats were anaesthetized with pentobarbitone (200 mg/kg) by abdominal injection, then heparin sodium (10 mg/kg) was injected into the caudal vein. The abdominal cavity was opened and portal vein and dorsal vein were exposed. Blood was released through vein and D-Hank’s solution was perfused (20-25 mL/min) until pale yellow appeared. Liver was taken out and undergone extracorporeal circulation when perfusion fluid was changed to GBSS containing 0.5 g/L pronase E, 0.5 g/L collagenase and 10 mmoL HEPES. Circle perfusion was performed for 30 min (15 mL/min). Liver was taken out and cut to pieces, then put into GBSS containing 0.25 g/L pronase E, 0.25 g/L collagenase and 10 mmol/L HEPES, shocked at 37 °C for 30 min, little suspended deposit was put in culture media on the top of three-layer density gradient centrifugation fluid containing 80 g/L and 130 g/L metrizamide, 2800 r/min centrifugation for 20 min, Cells were sucked between top layer and 80 mL/L density layer. DMEM containing 200 mL/L calf serum was used to regulate the number of cells to 1 × 105/mL.

DNA and collagen synthesis of HSCs HSCs in 2 to 4 th generation were digested by pancreatin and cultured with DMEM supplemented with 100 g/L calf serum and 100 mL/L horse serum. Cells were adjusted to 1 × 10-8/mL and inoculated on a 48-well plate, cultured for 24 h, then different concentration of ET-1 and the same dosage of drug was added, respectively and triplicated for each concentration. 3H-TdR and 3H-proline were used to assay the incorporation.

Collagen secretion of HSC In experiment of 3H-TdR, before transferred to F49 filter paper, 1 mL culture media was taken out and put into a tube. A 5 mmol/L acetic acid was used to adjust pH to 2 to 3, then 25 μL of 2.5 g/L pepsin was added to digest. A 50 μL of proline was added at 4 °C for 3 h, l, 1.2 mol/L trichloroacetic acid was fixed for 2 h, transferred to F4a filter paper, closed with saline, 0.6 mol/L trichloroacetic acid was used again, then bleached with anhydrous alcohol, baked at 80 °C. Radioactivity of specimens was measured on YSJ-75 liquid scintillation counter.

[Ca2+]i in Fura-2/AM loaded HSC HSCs were cultured on a rectangle glass when HSCs grew and covered the glass. Then cells were taken out of the glass and RPMI 1640 containing Fura-2/AM (10 nmol/L) was added to incubate at 37 °C for 50 min, D-Hank’s solution was used to wash extracellular free Fura-2/AM and incubated for another 30 min, 1 g/L trypsin was used to digest the cells and the number of cells was adjusted to 106/mL by buffer.

Trypan blue staining revealed an activity above 90% for HSCs. The purity of HSCs was more than 80% assessed by fluorescence microscope. The nuclei of HSC were stained blue among the desmin-positive satellite cells.

As shown in Table 1, ET-1 could accelerate 3H-TdR incorporation into HSCs and HSC DNA synthesis and proliferation (P < 0.05), in a concentration-dependent manner. 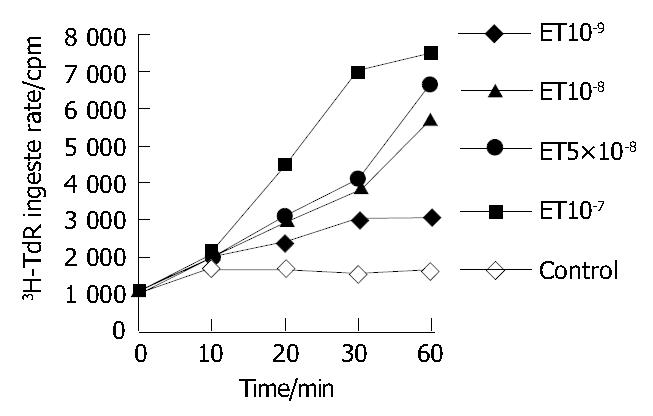 ET-1 could accelerate 3H-Proline incorporation into HSCs and collagen synthesis at the concentration of 5 × 10-8 mol/L (P < 0.05), in a concentration-dependent manner. 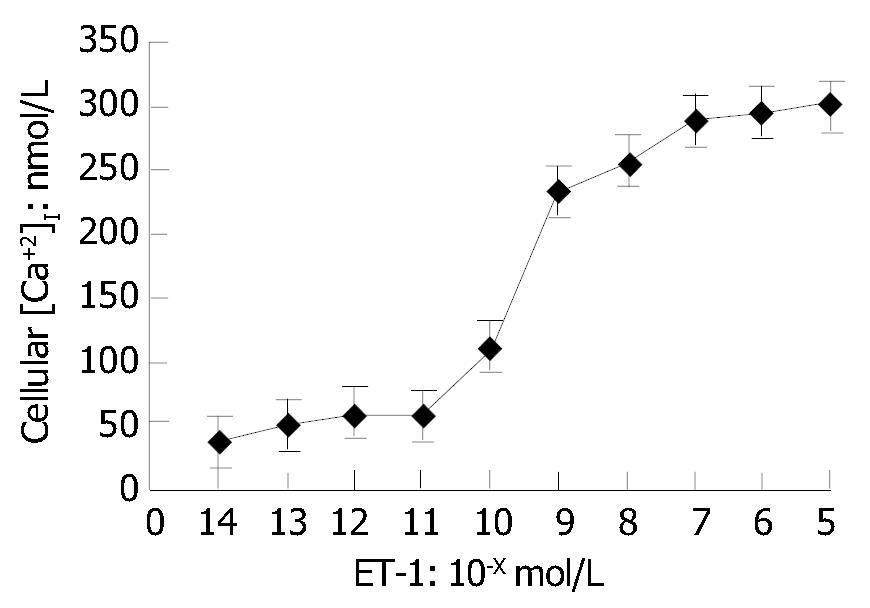 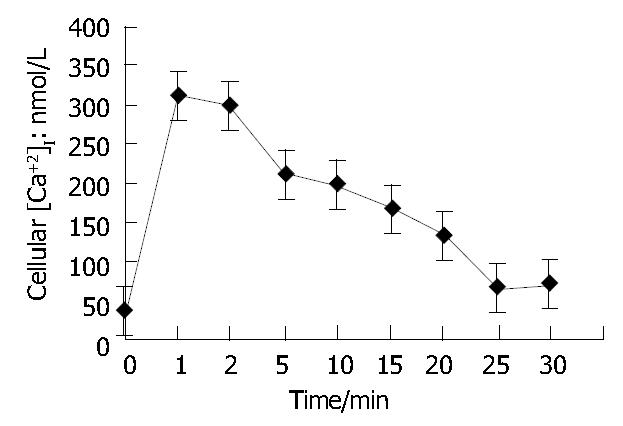 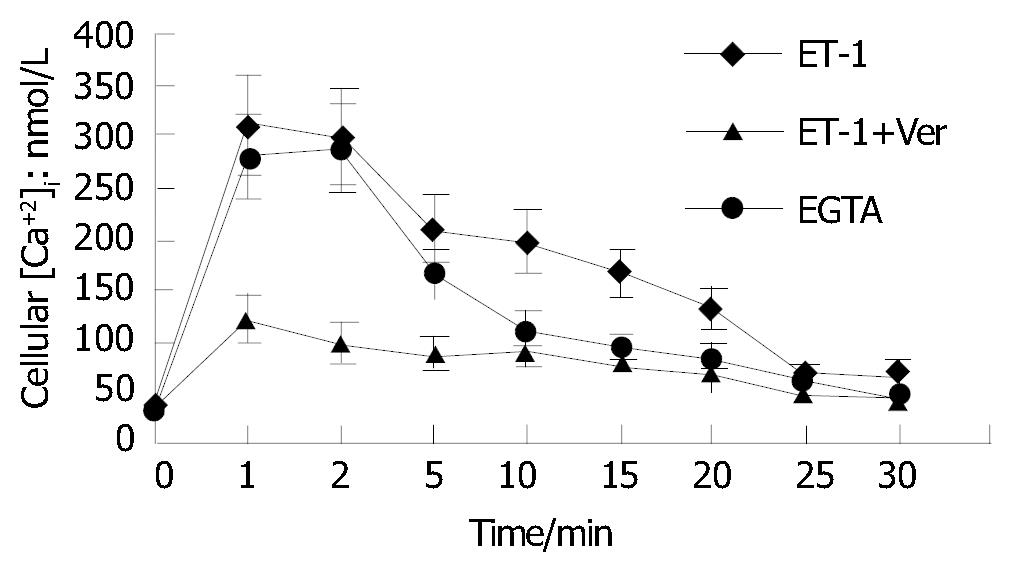 HSCs were first detected by Ito and Nemoto in 1952, which provided a new way to study episode mechanism of hepatic fibrosis and deepened the cognition of hepatic fibrosis from an angle of source cells of collagen production[2-6,15,16]. HSCs is also named Ito cell, VitA storing cell, liver antrum around cell, fat-storing cell, and is one of the liver interstitial cells. The main function of HSC is to store and metabolize VitA. It has been found to be able to synthesize and secrete ECM and synthesize collagenase[2-6]. When hepatic fibrosis occurred, HSC turned into fibroblasts or myofibroblasts that were the cause of liver synthesis of ECM. This change of HSC was called activation or conversion[2,3]. It has been certificated that interstitial cells especially HSCs are the main cells which producte collagen when hepatic fibrosis occurs. So it has become a central link in hepatic fibrosis occurrence mechanism.

ET distributes widely in liver and portal vein system, and has important biological effects on liver[18-24]. This experiment showed that ET could remarkably accelerate HSC proliferation, DNA synthesis, collagen synthesis and secretion. It is thus clear that ET-1 had double roles during hepatic fibrosis, accelerating not only HSC synthesis of collagen but also selective excretion of collagen. Besides[25,26], endothelial cells in hepatic sinusoid secrete endothelins that can activate HSCs. It has been reported that ET could raise [Ca2+]i in smooth muscle cells[27-29]. This study showed that ET-1 could raise [Ca2+]i in HSCs and appeared double phase reaction, fast phase and slow phase. Both phases had a dose-dependent manner. It turns out that when the cells are at resting state, if there is extracellular Ca2+, the [Ca2+]i in HSCs will be higher than that without extracellular Ca2+. ET-1 can remarkably raise [Ca2+]i in HSC with or without extracellular Ca2+. It implies that ET-1 can accelerate HSC release of intracellular Ca2+.

Three different ways have been found to elevate [Ca2+]i[30-33]. Plenty of calcium flows into cell through Ca2+ channel, Ca2+-ATP enzyme or Na+-Ca2+ changing system is restrained which can transfer Ca2+ out of cells; Ca2+storing systems such as mitochondrion and endoplasm increase Ca2+. We used Ca2+-free buffer and found it had no effect on [Ca2+]i in I P in HSC excited by ET-1 but could block [Ca2+]i in II P. It implies that elevated [Ca2+]i in I P is caused by increased Ca2+ stored in cells, while elevated [Ca2+]i in II P is caused by Ca2+ flowing out of cells. It has been currently accepted by some of scholars that the raise of Ca2+ in HSC is through the way of phospholipase C (PLC)-inositol triphosphate (IP3)-diacylgcerol (DAG)[34-51]. ET-1 excites PLC on cell membrane through G protein that makes 4,5-biphosphate inositol divide into IP3 and DAG-IP3. Mitochondrion, endoplasm and sarcoplasm that make Ca2+ in cell release to cytoplasm and increase free [Ca2+]i in cells. IP3 works only a very short time, and is quickly converted to IP4 by special enzymes. So peak I P lasts for a very short time, but IP4 can accelerate the opening of Ca2+ channel on cell membrane, which makes an increase of calcium flowing out of cells and at last results in a fast raise of [Ca2+]i in cells.

Physiological and pathological significance of elevated free Ca2+ in HSCs excited by ET is still not clear. Maybe it could participate the series of signals in cells and physiological effect of ET[25,27]. In conclusion, ET-1 can remarkably accelerate HSC proliferation, collagen synthesis and secretion, increase of [Ca2+]i in HSC and of release of Ca2+ in cells, thus accelerating proliferation of fibrous tissues and repair of injury tissues.