AIM: To evaluate the effects of tanshinone II-A on inducing growth inhibition and apoptosis of human hepatocellular carcinoma (HCC) cells.

METHODS: The human hepatocellular carcinoma cell line SMMC-7721 was used for the study. The cells were treated with tanshinone II-A at different doses and different times. Cell growth and proliferation were measured by MTT assay, cell count and colony-forming assay. Apoptosis induction was detected by microscopy, DNA ladder electrophoresis and flow cytometry.

RESULTS: In MTT assay, the inhibitory effect became gradually stronger with the passage of time, 24, 48, 72 and 96 h after treatment with tanshinone II-A, and the most significant effect was observed at 72 h. On the other hand, the increase of doses (0.125, 0.25, 0.5, 1.0 mg/L tanshinone II-A) resulted in enhanced inhibitory effect. The growth and proliferation of SMMC-7721 cells were obviously suppressed in a dose- and time-dependent manner. The results of cell count were similar to that of MTT assay. In colony-forming assay, the colony-forming rates were obviously inhibited by tanshinone II-A. In tanshinone II-A group, the morphology of cellular growth inhibition and characteristics of apoptosis such as chromatin condensation, crescent formation, margination and apoptotic body were observed under light and transmission electron microscopes. DNA ladder of cells was presented in electrophoresis. The apoptosis index (AI) was 16.9% (the control group was 4.6%) in flow cytometry. The cells were arrested in G0/G1 phase, and the expressions of apoptosis-related genes bcl-2 and c-myc were down-regulated and fas, bax, p53 up-regulated.

CONCLUSION: Tanshinone II-A could inhibit the growth and proliferation of HCC cell effectively in vitro by apoptosis induction, which was associated with up-regulation of fas, p53, bax, expression and down-regulation of bcl-2 and c-myc.

Hepatocarcinoma is one of the most common causes of malignancy-related death in China. Its therapy in clinic is a big challenge. New remedial method would possibly depend on advances in basic research[1]. Recent evidence suggests that apoptosis of cell is closely related to occurrence, progress and metastasis of tumor[2]. Study on induced apoptosis of tumor cells is an important field of tumor therapy and tumor molecular biology at present. Inducing apoptosis is a new therapeutic target of cancer research. New and promising anticancer drugs could be discovered by studies on apoptosis induction[3-5]. Tanshinone II-A is an alcohol-extracted product from the root of the traditional Chinese medicine-Salvia miltiorrhiza Bunge, which is known to have anti-inflammatory, anti-oxidative and cytotoxic activities[6-9]. Traditional Chinese medicines considered as potential drug in cancer treatment. Previous studies confirmed that tanshinone II-A could induce differentiation of human cervical carcinoma cell line (ME180) and leukemia cells (NB4, HL60 and K562), reverse malignant phenotype of human hepatocarcinoma cell line (SMMC-7721)[10-16]. However, there were no studies about growth inhibition and apoptosis induction of tanshinone II-A in hepatocarcinoma cell. In this in vitro study, human hepatocarcinoma cell line SMMC-7721 was used. The growth inhibition and apoptosis induction of tanshinone II-A on SMMC-7721 cell were obviously exhibited. We conclude that the effect of growth inhibition of tanshinone II-A on hepatocarcinoma might be related to induction of cellular apoptosis through regulation of apoptosis-associated genes.

Tanshinone II-A (Tan II-A) was provided by Institute of Traditional Chinese Medicine (concentration 96%). It was dissolved in DMSO (final concentration 0.2 mL/L). The solution was filtered through a 0.22 µm micropore filter and stored at 4 °C.

SMMC-7721 cells were treated with Tan II-A (0.125, 0.25, 0.5, 1.0 mg/L) for 96 h, respectively, then condition of the cell growth was observed under an inverse and light microscope. Number and viability of the cells were assessed by trypan blue exclusion.

Cells were seeded in a 6-well plate with 300 cells per well. After 24 h, the cells were treated with Tan II-A (0.125, 0.25, 0.5, 1.0 mg/L), and cultured in routine medium for 10 days continually. Then the cells were fixed by methanol, Giemsa staining. Finally, the sum of colony per group was counted. The inhibiting rate of colony-formation was calculated.

SMMC-7721 cells were treated with DMSO (control group) or 0.5, 1.0 mg/L Tan II-A for 48 h. The cells were gently washed with serum-free medium, and observed by inverse and light microscopy after Giemsa staining. On the other hand, some other cells were fixed with 25 g/L glutaraldehyde in 0.1 mol/L of sodium cacodylate buffer, osmicated with 10 g/L osmium tetroxide. then cell block was stained, dehydrated in graded ethanol, infiltrated with propylene oxide, and embedded overnight and incubated in a 60 °C oven for 48 h. Silver sections were cut with an Ultracut E microtome, collected on a formvar and carbon-coated grid, stained with uranyl acetate and Reynold’s lead citrate, and examined under a transmission electron microscope to identify the morphological changes of apoptosis.

The sample preparation and measurement followed the method described in reference[15]. The cells were harvested, counted and fixed. The cell concentration was adjusted to 106/mL. According to the routine method, cell frequency distribution of each phase in cell cycle was measured. Cellular fas, p53, bax, bcl-2 and myc gene expressions were detected by immunohistochemical method on FACS-420 FCM. The results were shown with scanning figure and date.

Data were presented as the mean ± SD error of the mean. Student’s t test was used for comparison among different groups. A P value of less than 0.05 is considered statistically significant.

Tan II-A exhibited a statistically significant dose-dependent growth-inhibitory effect on SMMC-7721 cell evaluated by MTT assay. The inhibiting rates of cell growth were 12.2%, 30.6%, 52.4% and 82.5%, respectively when treated with Tan II-A of different doses (0.125, 0.25, 0.5, 1.0 mg/L) for 96 h (Figure 1A). Moreover, the growth-inhibitory effect of Tan II-A on the cells was found to be time-dependent. The inhibiting rates were 12.5%, 38.2%, 47.6% and 58.7%, respectively when treated separately for 24, 48, 72 and 96 h with 0.5 mg/L of Tan II-A (Figure 2B). The inhibitory effect became gradually stronger with the passage of time after treatment, and the most significant effect was observed at 72 h. The cell growth and proliferation were obviously inhibited in a dose- and time-dependent manner. The same inhibitory effect was found by cell count. In colony-forming assay, the colony-forming rates of SMMC-7721 cell were 11.6%, 22.5%, 38.5%, 42.2% in Tan II-A group and 68.2% in control group, respectively, suggesting the obviously inhibiting effect of Tan II-A on cell proliferation. 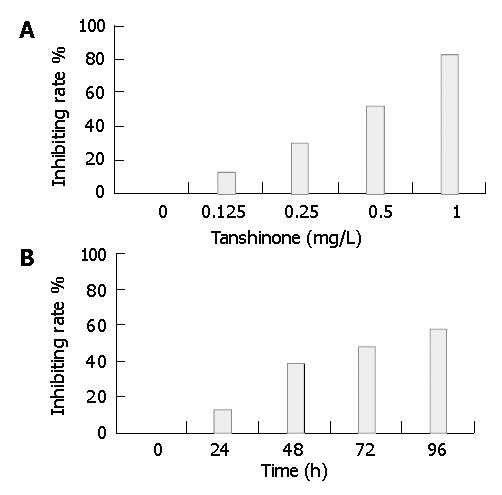 As shown in Figure 2, Tan II-A-induced morphological changes were evident by 72 h of treatment in SMMC-7721 cell. Roundish, large and serried cells (in control group, Figure 2A) became polygonal, small, detached or sparse, membranous frothed and wizened (Tan II-A group, Figure 2B) in the dishes under light microscope. The ultrastructural characteristics of apoptosis such as chromatin condensation, crescent formation, margination and apoptotic bodies were observed by electron microscopy in the Tan II-A group (Figure 3), which were more obvious in the given experimental period than that in the control group. 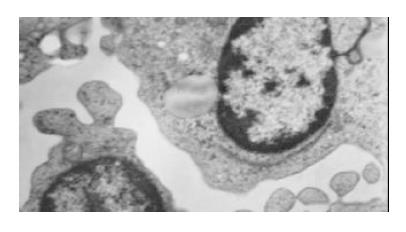 Agarose gel electrophoresis exhibited DNA ladder formation in SMMC-7721 cell after exposed to different concentration of Tan II-A for 96 h. Compared with control, the DNA ladder was more clearly observed by treatment with 0.5, 1.0 and 2.0 mg/L Tan II-A, while the DNA fragment induced by 0.125, 0.25 mg/L Tan II-A was not clear (Figure 4). 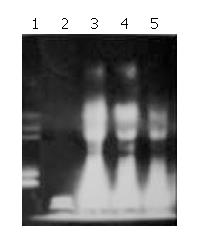 In order to determine the effect of Tan II-A on proliferation and apoptosis in SMMC-7721 cell, the cells were exposed to 0.5 mg/L Tan II-A for 96 h. Cell cycle distribution, cell proliferation and apoptotic damage of DNA were determined on a flow cytometer. The result showed the accumulation of cells in G0/G1 and a corresponding reduction in percentages of cells in S and G2/M phase, and decreased proliferation index (PI). The cells in sub-G1 phase were increased. An apoptotic peak was detected (Table 1, Figure 5)

Figure 5 Flow cytometry analysis of apoptosis in SMMC-7721 cells treated with Tan II-A (A) and DMSO (B).
Apoptosis-associated genes expression

The expressions of apoptosis associated genes fas, bax, p53 were up-regulated. The expressions of bcl-2 and c-myc were down-regulated (Table 2). The tabulated percentages were an average calculated on the results of three separate experiments. The values were presented as mean ± SE (n = 3).

Cellular proliferation and apoptosis in normal tissue maintain a balance. Unlimited growth and proliferation, but blocked apoptosis are main characteristics of malignant tumor cell. So inhibiting proliferation by apoptosis induction of cancer cell is a new method for cancer control and therapy[18-20].

On the basis of previous studies, we chose different concentrations of non-cytotoxic Tan II-A to study Tan II-A induced-apoptosis in vitro. MTT, cell count assay and colony-forming assay showed that 0.25, 0.5, 1.0 mg/L Tan II-A obviously inhibited the growth and proliferation of SMMC-7721, and the inhibiting effect was in a dose- and time-dependent manner. The most significant effect was observed at 72 h by 1.0 mg/L Tan II-A. Flow cytometer showed that Tan II-A produced significant cell cycle arrest in G0/G1, decreased proliferation index (PI) as evidence of an antiproliferation effect. The cellular growth and inhibition could be observed by morphology. The morphological characteristics of cellular growth inhibition were also observed under light microscope. Our results demonstrated that Tan II-A inhibited growth and proliferation of SMMC-7721 cells[21,22].

Apoptosis, or programmed cell death, has an essential role in controlling cell number in many developmental and physiological settings and in chemotherapy-induced tumour-cell killing. The execution of apoptosis may be initiated by many different signals, either from within or outside the cell involving ligand-receptor interactions, as has been shown for Fas/Fas-ligand, or potentially by more unspecific signals such as DNA damage. During the modulation phase of apoptosis many different genes such as p53, c-myc or Bcl-2/Bax have been shown to be able to shift the balance either to cellular proliferation or death. Cellular growth and proliferation are closely related to apoptosis[23-25].

The detection of apoptotic cell by microscopy is based on several well-established morphological features. These features include condensation of chromatin and cytoplasm as well as fragmentation of the cells that lead to the appearance of membrane bound apoptotic bodies[26]. Those ultrastructural characteristics apoptosis, the DNA ladder and increased cells in sub-G1 phase were observed in SMMC-7721 cells treated with 0.5, 1.0 mg/L Tan II-A.

Apoptosis-associated genes play a major role in apoptosis, participating in the initiation and progress of programmed cell death. Bcl-2 has been identified as an apoptosis inhibitor, and shown to cooperate with c-myc in immortalizing cells. Under certain conditions, constitutive expression of c-myc induces apoptosis and can be suppressed by bcl-2. It appears that the c-myc cooperating oncogenic activity of bcl-2 is related to its inhibition of apoptotic pathways[26]. Bax protein inhibits the function of bcl-2 leading to increased apoptosis.

The tumor suppressor gene p53, a transcription factor, has been identified as a participant in the cellular DNA damage response. Upon DNA damage, p53 up-regulation causes G1 arrest. The apoptosis promoting capacity of p53 is presumably due to its ability to activate bax, a gene that encodes an inhibitor of bcl-2. Fas (CD95/APO-1) is a death-promoting receptor that belongs to the tumor necrosis factor (TNF) receptor family, and induces apoptosis through different ways[27].

In the present study, we observed down-regulation of bcl-2 and c-myc expression, which is in keeping with the role of bcl-2 in blocking apoptosis and c-myc in promoting proliferation. At the same time, the expressions of apoptosis associated genes fas, bax, p53 were up-regulated. These suggested that Bcl-2, c-myc, fas, bax and p53 were involved in apoptosis of hepatocarcinoma cells induced by Tan II-A. Parts of these mechanisms were related to inhibition of cell growth. Some results of our study on inducing apoptosis in human hepatocellular carcinoma cell are consistent with other researches[28].

Tan II-A inhibits growth and proliferation of hepatocarcinoma cells by inducing apoptosis. Tan II-A might have different mechanisms in inducing apoptosis and inhibiting proliferation of cancer cells. Other possible mechanisms of the action of Tan II-A need to be further investigated. We consider that Tan II-A could be a new prospective, highly effective and low toxic anticancer drug.