AIM: To study the effects of sense and antisense KAI1 genes on the growth and invasion of human hepatocellular carcinoma (HCC) cell line MHCC97-H.

CONCLUSION: Changes of KAI1 expression in HCC cells may alter their invasive and metastasis ability of the tumor.

Hepatocellular carcinoma (HCC) is one of the most common malignant tumors in China. Metastasis and recurrence are the most principal factors for the prognosis of patients with the tumor[1]. KAI1 gene, isolated from human metastatic prostate tumor in 1995, was regarded as a new metastasis suppressor gene. Up to now, many researches on the relationship between KAI1 gene and invasion, metastasis of malignant tumors have been reported, but most of them were made by histopathological and molecular pathological methods[2-16]. In the present research, we studied the effects of KAI1 gene on the growth and invasion of human hepatocellular carcinoma (HCC) by subclone, gene transfection and antisense technology.

MATERIALS AND METHODS
Plasmid and vector

Plasmid pCMV-KAI1, with a full length of 8.2 kb, containing human a full-length of KAI1 structural cDNA gene, was a generous gift from Professor J.Carl Barrett and Dr. Dong of National Institute of Health of USA[2]. Eukaryotic expression plasmid vector pCI-neo, with a full length of 4.7 kb, was purchased from Promega Corporation.

Sense and antisense KAI1 eukaryotic expression plasmids constructed by subclone technique, were confirmed and identified by restriction endonuclease Sal I and Xba I analysis.

Sense and antisense KAI1 eukaryotic expression plasmids were transfected into MHCC97-H cells respectively by DOTAP (Roche, USA) liposome transfection system similar to our previous report[18]. Forty-eight hours after transfection, the cells were transfer-selection-cultured for two weeks under the pressure of 800 mg/L G418 (Pierces, USA) in the culture medium. Then the positive cell clones were mixed and the resistance cells were expanded to be cultured under the pressure of 250-600 mg/L G418. Enhanced culture, passaging and storage were performed until few cells were killed by G418.

Integration and expression of transfected genes

Ultrastructural changes of the cells transfected with sense or antisense KAI1 gene were observed with transmission electron microscope.

Cells in exponential growth phase were trypsinized to develop single-cell suspension. Four × 104 viable cells in 1 mL of medium were added to each well of the 24-well culture plates, which were incubated at 37 °C with 50 mL/L CO2. Cell numbers in 4 wells were counted and averaged with blood counting chamber every 24 h for 10 consecutive days, and cell growth curve was plotted based on these results.

Cell cycle analyses were performed by flow cytometry, and each group was examined for 3 times.

Cells cultured (2 × 103) for 48 h were added to each well containing 1mL of culture medium of a 6-well culture plate, each cell group contained 4 wells. Then the culture plate was gently swayed to disperse cells. The cells were incubated at 37 °C with 50 mL/L CO2 for 12 d. Then the cells were washed twice with warm PBS, and stained with Giemsa solution. The number of colonies containing 50 cells or more was counted under a microscope.

In vitro invasive ability was tested by Boyden Chamber assay[20,21] according to the kit directions. Invasion Chamber inserts (BD Biosciences, USA) with 8 μm-pores in their PET membrane had been coated by matrigel. Before invasion assay, the invasion chambers were rehydrated with DMEM (serum-free) for 2 h in a humidified tissue culture incubator at 37 °C with 50 mL/L CO2 atmosphere. DMEM with 100 mL/L fetal bovine serum was added to the lower compartment, and 1.5 × 105 tumor cells in serum-free DMEM were added to the upper compartment of the chamber. Each cell group was plated in 3 duplicate wells. After 48 h incubation, the matrigel was removed, and the filter was washed, cells were fixed and stained in Giemsa solution. Then the cells having migrated to the lower sides of the PET membrane in 5 random visual fields (200 ×) were counted under a light microscope.

Two fragments of 3 kb and 5.2 kb appeared after pCMV-KAI1 was digested by Xba I. According to the plasmid pCMV-KAI1 map, the 3 kb fragment containing human full-length structural KAI1 cDNA gene was extracted. The cleaved vector pCI-neo after digestion by Xba I and dephosphorylation by CIP was linked up with the 3 kb fragment. Two recombinant plasmids were extracted and digested by Sal I, the plasmid appearing 2 fragments of 2.25 kb and 6.22 kb after digestion was consistent with the expected sense KAI1 expression plasmid, and the other appearing two fragments of 0.75 kb and 7.72 kb was consistent with the expected antisense KAI1 expression plasmid (Figure 1A). Then the 2 recombinants were digested by Xba I to further confirm the insertion of target fragment into the vector. The results showed the two recombinants were respectively cleaved into the same two fragments 3kb, 5.4 kb (Figure 1B), and suggested subclone reconstruction was successfully performed. 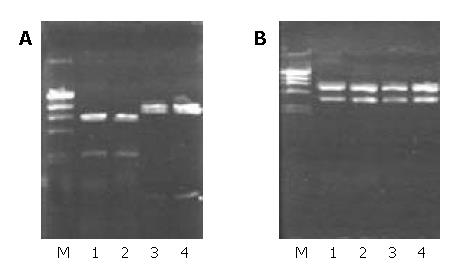 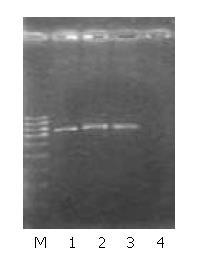 Western blot and immunocytochemistry staining showed KAI1 protein expression was enhanced in MHCC97-H-S, but decreased in MHCC97-H-AS, and no obvious difference in MHCC97-H-pCI as compared with MHCC97-H cells (Figure 3, Figure 4).

No significant differences in growth curve and cell cycles were observed among MHCC97-H-S, MHCC97-H-AS, and MHCC97-H cells in 10 consecutive days (Figure 6, Table 1). The results demonstrated that KAI1 gene had no obvious effect on cell proliferation ability.

KAI1 is a newly discovered metastasis suppressor gene in human prostate cancer, which was mapped to chromosome 11p11.2 by Dr. Dong et al[2] of National Institute of Health, USA in 1995. KAI1 specifies a leukocyte surface glycoprotein of 267 amino acids with molecular mass of 29610 u. KAI1 protein has been recognized as a structurally distinct family of membrane glycoproteins, transmembrane 4 superfamily[22]. Recent researches showed the expression of KAI1 was down-regulated not only in human prostate cancer but also in a variety of human malignant tumors[3,16], and these suggested KAI1 might be a broad-spectrum metastasis suppressor gene for human tumors.

Previous studies on the relationship between KAI1 gene and tumor invasion, metastasis were mostly based on the detection of KAI1 protein, DNA or RNA in tissue samples from surgical resections with immunopathological and molecular pathological methods in combination with analysis of clinical data. In the present study, we transfected full-length structural sense and antisense KAI1 genes from subclone recombinants into hepatocellular carcinoma MHCC97-H cell line with highly metastatic potential respectively. By observation of the changes of cell growth, invasion and ultrastructures of MHCC97-H before and after KAI1 transfection, we hoped to understand the effects of KAI1 gene on the capability of growth and invasion of hepatocellular carcinoma and to provide experimental evidences for the prevention and treatment of invasion and metastasis of this malignant tumor.

Restriction endonuclease analysis showed KAI1 full-length cDNA was respectively inserted into plasmid vector pCI-neo by two different directions, indicating that sense and antisense KAI1 genes eukaryon expression plasmids were successfully reconstructed. After KAI1 gene transfected into MHCC97-H by DOTAP liposome system, amplification of the neo gene in transfected cells was performed by PCR to confirm whether KAI1 gene was integrated into genomes of target MHCC97-H cells. Neo is a screening marker gene in the vector pCI-neo, and no sequence of this gene exists in the genomes of mammal cells, but it could stably exist in the genomes of mammal cells after transfection. Therefore, if the sequence could be amplified from the genomes of transfected cells by PCR, it could confirm the exogenous genes were integrated into genomes of MHCC97-H cells. PCR results showed sense and antisense KAI1 genes eukaryon expression plasmids were successfully integrated into genomes of MHCC97-H. Western blot and immunocytochemical staining were made to determine if the recombinant plasmids could expectantly express in the transfected cells. The results showed that sense KAI1 could up regulate the expression of KAI1 protein in MHCC97-H as compared with the control parental cells, but antisense KAI1 could down regulate the expression of KAI1 protein, and no obvious difference between the cells transfected with pCI-neo and the control parental cells was noted. These results showed the transfected genes could produce expected effects, and vector pCI-neo itself had no obvious effects on the expression of KAI1.These suggested that the above cells transfected with genes could be used to explore the effects of KAI1 on the biological behaviors of HCC cells.

In the present study, our data indicated that KAI1 gene had no obvious effects on the in vitro cell growth and proliferation of hepatocellular carcinoma MHCC97-H cell line. These results were consistent with the studies in prostatic cancer, colon cancer cells by Dong and Takaoka et al[2,23]. In contrast with MHCC97-H control parent cells, the plate clone formation ability had no obvious reduction in MHCC97-H-S, but had obvious enhancement in MHCC97-H-AS cells. These data suggested down regulated expression of KAI1 could enhance motoricity and aggregative abilities of MHCC97-H. Though the cells transfected with sense KAI1 expressed more KAI1 protein revealed by Western blot and immunocytochemical staining, their plate clone formation ability had no obvious reduction. This may be attributed to the small amount of KAI1 protein expression in MHCC97-H cells.

Invasion has been found to be one of the important and necessary properties for tumor metastasis formation[24-29]. Boyden chamber assay, which imitates the invasion process of in vivo tumor cells, has also been found to be an ideal method for evaluating the invasive and metastatic abilities of tumor cells[20,22]. Our data suggested that the invasive ability of HCC cells transfected with antisense KAI1 gene was increased, but the invasive ability of HCC cells transfected with sense KAI1 gene was partly inhibited. These indicated that different levels of KAI1 protein expression in HCC cells could affect their invasive and metastatic ability and that it might be an effective route to up regulate KAI1 expression for inhibiting the metastasis of HCC.

Under transmission electron microscope, we found that though KAI1 gene had no obvious effects on cell shape, superficial microvillus, karyotype and karyokinesis of MHCC97-H, sense KAI1 gene transfected into MHCC97-H resulted in reduction of the amount of mitochondria, however antisense KAI1 gene transfection resulted in increase of the amount of mitochondria, RER and Golgi apparatus with expanded endoplasmic reticulum and myelin-sheath-like changes of mitochondria. The biological function of these changes was unknown. It is still necessary to further study whether increased expression of KAI1 can inhibit invasion and metastasis of tumor cells by decreasing products of some organelles.

Though present researches have suggested KAI1 gene is important in preventing the development of metastases in a wide variety of human tumors, the mechanism of KAI1-mediated metastasis suppression remains unclear. The molecular structure of KAI1 protein indicates KAI1 functions in cell-cell interactions and cell-extracellular matrix interactions. These suggest that KAI1 may affect cell-cell adhesion and cell-extracellular matrix adhesion through some signaling pathways to inhibit tumor metastasis[30,31].