AIM: To study the expression of CDw75 in patients with gastric carcinoma and to correlate CDw75 expression with progression of the tumor.

METHODS: Immunohistochemical method was used to examine the expression of CDw75 in 72 cases of the gastric carcinoma and adjacent normal gastric mucosa, and the percentage of the cells positively stained with CDw75 was calculated using a computer-aided microscopic image analysis system.

CONCLUSION: These findings suggest that the expression of CDw75 is a significant histopathological marker for more advanced stage of gastric carcinoma and indicates a poor prognosis for the patients.

Invasiveness and metastasis are the most important characteristics of malignant tumor and mortality factors. Clinicopathological parameters are usually used for diagnosis and prognosis. Recent studies have shown that the expression of sialylated glycoconjugates is closely associated with the aggressiveness and metastatic potential of malignant cells. CDw75 epitope is a sialylated carbohydrate determinant generated by the β-galactosyl α-2,6-sialyltransferase, and it has been reported to be associated with the progression of gastric cancer[1]. Gastric cancer is one of the most common tumors of alimentary tract in China, and its mortality is high. In this study, we examined the expression of CDw75 in 72 cases of gastric carcinoma and adjacent normal gastric mucosa using immunohistochemical method to determine whether CDw75 is correlated with the invasiveness and metastasis of gastric carcinoma.

Seventy-two patients with gastric cancer, who were diagnosed and treated at the Departments of Pathology and General Surgery, Renmin Hospital of Wuhan University, from 1995 to 1999, were randomly selected for this study. The patients had undergone subtotal or total gastrectomy combined with lymph node resection. Sections from the surgical specimens were fixed in 40 g/L formaldehyde and embedded in paraffin. The mean age of the patients was 59 years with a range from 35 to 74 years and a male-to-female ratio of 1.48. The patients were followed to determine clinical outcome and the median follow-up time at the end of the study was 45 mo (range, 3-64 mo). The other clinicopathological characteristics are listed in Table 1. The histological type of the tumor was defined by World Health Organization classification (tubular, papillary, mucinous, or signet ring[2], the degree of differentiation (well, moderate, or poor) was recorded on haematoxylin and eosin (H & E) stained tissues, and tumor stage was graded according to new PTNM criterion which was published by International Union Against Cancer (IUCC)[2].

Streptavidin-peroxidase (S-P) method was used to detect the expression of CDw75. The mouse monoclonal antibody against human CDw75 (LN1) was purchased from NeoMarkers Company, Wuhan, China, immunostaining S-P kit and DAB reagent were purchased from Fuzhou Maxim Biotechnical Company, Fuzhou, China. Sections from each primary tumor and adjacent mucosa were deparaffinized and heated in a microwave oven for 15 min to retrieve antigens. Endogenous peroxidase was blocked with 3 mL/L hydrogen peroxide methanol for 10 min at room temperature. After washing with phosphate-buffered saline (0.01 g/L, pH7.4) for 3 × 5 min, the tumor sections were incubated with normal non-immune serum from bull for 15 min at room temperature to eliminate nonspecific staining. The sections were then incubated with the primary antibody against CDw75 (dilution 1/100) for 60 min at room temperature, washed with PBS for 3 × 5 min, and incubated with the secondary biotinylated antibody for 15 min followed by avidin-biotin-peroxidase for 15 min at room temperature. Finally, the slides were washed for 3 × 15 min with PBS, visualized with DAB reagent and counterstained with haematoxylin. Negative and positive controls were used simultaneously to ensure specificity and reliability of the staining process. The negative controls were performed by substituting the primary antibody with PBS, and a positive section supplied by manufacturer of the staining kit was taken as positive control.

CDw75 expression in all patients with gastric carcinoma was analyzed against clinicopathological parameters. The correlation between CDw75 expression and selected clinicopathological parameters was analyzed with the Wilcoxon rank sum test and χ2 test. Kaplam-meier curve was constructed to assess the survival. P value of less than 0.05 was considered to be statistically significant.

Normal gastric mucosa was consistently negative for CDw75 staining (Figure 1), while positive staining was observed in 37 of 72 (51.4%) gastric cancers. The staining intensity was as follows: -, 35 cases (48.6%) ; +, 9 cases (12.5%) ; ++,13 cases (18.1%) ; +++, 9 cases (12.5%) ; ++++, 6 cases (8.3%). The positive staining of CDw75 was localized predominantly in gastric cancer cells, and all the positive cases showed diffuse membrane staining, or cytoplasmic staining in some cases (Figure 2). The immunoreactive cells were either distributed unevenly throughout the tumor tissue or aggregated in focal clusters. In addition, positive staining was occasionally detected in lymphocytes or other inflammatory cells infiltrating the cancer nests (Figure 3). 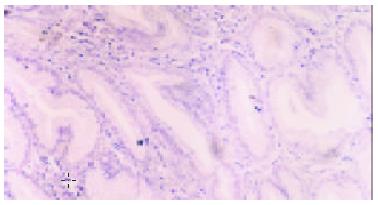 Figure 1 Expression of CDw75 in normal gastric mucosa. No gastric mucosa cell were brown-stained either on membrane or in cytoplasm. (SP × 400). 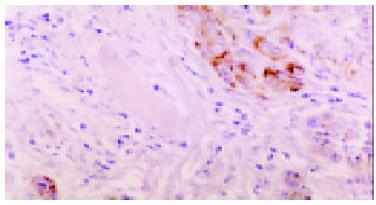 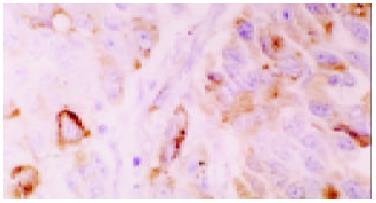 The CDw75 expression in tumor tissues was related significantly to clinicopathologic factors, such as the depth of tumor invasion, TNM stageand lymph node metastasis (Table 1). The percentage of CDw75 expression in tumors which invaded serosal or deeper layers (T3 or T4) was significantly higher than that in tumors which were restricted within mucosa or muscular layers (T1 or T2) (P < 0.01). When tumors were accompanied by lymph node metastasis, CDw75 expression was elevated significantly compared with those without metastasis (P < 0.05). The cases were also categorized by TNM staging. To compensate the error due to shortage of cases, stage I and stage II cases were combined into one group. CDw75 expression was found in 10 of 32 (31.3%) stage I + II cases, 12 of 20 (60.0%) stage III cases and 15 of 20 (75.0%) stage IV cases. The percentage of positive CDw75 staining in stage III and IV cases was significantly higher than that in stage I + II (P < 0.05 and P < 0.01, respectively), while there was no significant difference in those between stage III and stage IV (P > 0.05). 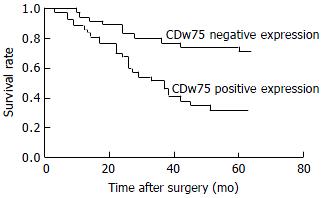 The infiltration and metastasis of gastric carcinoma is a multi-stage, complicated process, which could be influenced by many factors, such as the formation of neoplastic vessels, degradation of tissue membrane and matrix, mobility of tumor cells and quantity and activity of infiltrating leucocyte inside the tumor tissues. Recently, many tumor makers have been identified which are used not only for diagnosis but also for assessment of aggressiveness and prognosis of tumors[3-8]. Tumor markers are antigens or other biological products generated by tumor cells, which are present few or none in normal and non-neoplastic tissues. They usually indicate the change of genes associated with development of tumor and can be detected in tumor tissues or body humour or excretions of the patients[9,10]. CDw75 antigen is one plausible tumor marker that has been shown recently to be associated with the progression and metastasis of gastric carcinoma[1]. Consistent with previous finding[1], the present work demonstrated that CDw75 expression was constantly negative in normal gastric mucosa but positive in 37 of 72 (51.4%) gastric cancers.

CDw75 antigen is a cluster of differentiation antigen of human leucocyte designated at the fourth World Leucocyte-Type Conference in 1989[1]. It is a sialylated carbohydrate determinant generated bySia-T1[11] and has many different isomers, which are specifically expressed in different tissues and can be recognized by corresponding monoclonal antibodies. There have been 4 monoclonal antibodies raised to react with CDw75 antigen, including EBU-141, OKB4, HH2 and LN1, etc.[1]. These CDw75 monoclonal antibodies are likely to identify spatially related structures since binding inhibition studies have shown that binding of each CDw75 monoclonal antibody blocks the binding of the other CDw75 monoclonal antibody. The epitopes recognized by HH2, LN1 and EBU-141 are completely destroyed when cells are treated with neuraminidase, suggesting that sialic acid is a part of these CDw75 determinants[1,12]. In contrast, when the epitope reacts with neuraminidase, the binding of OKB4 with CDw75 epitope is increased, indicating that the OKB4 epitope may be masked by sialic acid and can appear after treatment with the neuraminidase[1,12]. These results suggest that sialic acid may have determinant impact on the character of CDw75 antigen.

Furthermore, studies have shown that cell-surface glycoconjugates play an important role in cell proliferation, adhesion, metastasis and immungenicity. Only the subclone of primary tumor cells that express specific glycoconjugates has metastatic ability[1,12]. The composition and structure of cell surface glycoproteins change frequently during the neoplastic transformation, and most of these changes are the extensive sialyation of cell surface glycoproteins. Moreover, tumor-associated expression of sialylated glycoconjugates has been found to be closely associated with aggressive activity and increased metastatic potential of malignant cells[3]. There are several plausible mechanisms underlining such a correlation: sialic acid reduces the attachment of tumor cells to collagen type IV and fibronectin, masks antigen determinants, inhibits the action of natural killer cells, and induces immunologic tolerance through an increase of the serum half-life of glycoconjugates, etc[1,12]. In gastric carcinoma, various sialylated glycoconjugates, such as Lewis X (Lex), Lewis A (CA-19-9) and sialosyl-Tn, etc, have become clinically important in the detection of aggressive behavior of tumor cells and prediction of disease prognosis[13-16].