AIM: To analyze the role of liver biopsies in differential diagnosis after liver transplantation.

METHODS: A total of 50 biopsies from 27 patients with liver dysfunction out of 52 liver transplantation cases were included. Biopsies were obtained 0-330 d after operation, in which, 44 were fine needle biopsies, another 6 were wedge biopsies during surgery. All tissues were stained with haemotoxylin-eosin. Histochemical or immunohistochemical stain was done.

CONCLUSION: Acute rejection and preservation-reperfusion injury are the major factors in early liver dysfunction after liver transplantation. Hepatic artery thrombosis and prolonged cold preservation may result in intrahepatic biliary injury. Acute rejection and viral infection may involve in the pathogenesis of chronic rejection. Since there are no specific lesions in drug-induced hepatic injury, the diagnosis must closely combine clinical history and rule out other possible complications.

Liver transplantation has been accepted as an effective therapeutic option for patients with acute or chronic end-stage liver diseases. However, the postoperative course of liver transplant recipients will face to rejection for alloantigens and a number of complications. Among which, hepatic artery thrombosis, intrahepatic biliary injury, preservation-reperfusion injury, opportunistic infection as well as immunosuppressive drug-induced hepatic injury are critically for allograft liver poor function. Clinically, the complications are short of specific symptoms and signs, although the supervision for blood biochemistry, Doppler-ultrasound and radiologic image has some value to the evaluation of graft liver dysfunction, the final diagnosis still relies on liver biopsy evaluation. Here is a pathological study on fifty allograft liver biopsies which have been collected in our transplantation center since June 2002. These biopsies covered a number of complications following liver transplantation.

From June 2002 to September 2003, a total of 52 orthotopic liver transplantations (OLTs) were performed in Transplantation Center, Ruijin Hospital of Shanghai. Fifty liver biopsies were obtained from 27 patients with liver dysfunction 0-330 d after operation. In which, 44 were fine needle biopsies, another 6 were wedge biopsies during surgery. All tissues were fixed in 40 g/L buffered formaldehyde and embedded in paraffin.

Serial 3 μm thick sections were cut on all biopsies. One section was stained with hemotoxylin-eosin. Others were stained by histochemical or immunohistochemical methods whenever it was needed. For example, if cytomegalovirus (CMV) infection was suspicious, CMV antigen immunohistochemistry would be done. If chronic rejection was suspicious, CK19 or CA19-9 immunohistochemistry for bile duct detection would be done. Criteria for evaluating acute rejection were based on Banff Schema published in 1997[1,2]. Criteria for evaluating chronic rejection were based on Banff Schema published in 2000[3]. Acute rejection was characterized by predominant portal-based lesions, including a classical triad of mixed inflammatory cell infiltrates, venous endothelial inflammation and inflammatory infiltration of bile ducts. Chronic rejection was characterized by ductopenia and obliterative arteriopathy.

This clinical study was performed on archival pathological files, which were obtained as part of routine clinical practice.

The occurring time of different complications was different. Preservation-reperfusion injury and hepatic artery thrombosis mainly occurred within 2 wk following operation. Acute rejection could happen at any time from 1 wk to 310 d, but often took place at the end of 1 wk to 30 d following operation. The poor graft liver function that occurred 60-90 d postoperation was closely related to intrahepatic biliary injury. Early chronic rejection could happen as early as 45 d after transplantation but mainly occurred from 90 to 330 d post-transplantation. Only one recurrent hepatitis B happened in this group, 300 d after transplantation. The occurring time features of different complications are shown in Figure 1. 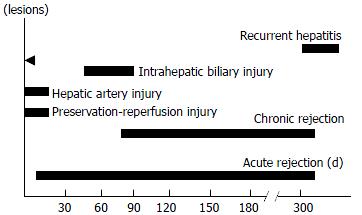 The pathological examination on different biopsies from the same patient showed that one patient with hepatic artery thrombosis (HAT) 12 d postoperation (Figure 2) developed to intrahepatic biliary injury (IBI) 80 d following transplantation (Figure 3). Two cases in our group occurred IBI 2-3 mo after operation. One of which was secondary to HAT (the donor liver with warm ischemia for 5 min, cold storage time was 9 h), there was warm ischemia after 7 min, and cold storage time was 8 h for donor liver in another case with IBI. One case was diagnosed as chronic rejection (Figure 4) at 3 mo postoperation and disclosed persistent cytomegalovirus (CMV) infection at early stage following transplantation (Figure 5). Chronic rejection was occurred in another case due to recurrence of hepatitis B (Figure 6). Chronic rejection occurred in one case due to acute rejection (Figure 7), early chronic rejection occurred in one case at onset. If poor allograft liver function was persistent, liver biopsy showed hepatocyte ballooning, macrovesicular steatosis, cholestasis, and above-mentioned complications could not be confirmed, drug-induced hepatic injury was suspected. 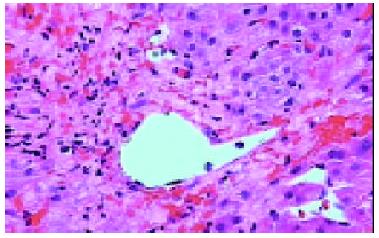 Figure 3 Bile duct damage with inflammation 80 d after transplantation. HE × 200.

Figure 4 CMV infection in peripheral blood and micro-ab-scess without inclusion bodies in liver cells 1 mo after transplantation. HE × 200.

Figure 6 Fibrosis in portal area with lymphocyte infiltration and interface hepatitis in patient with recurrent hepatitis B 300 d post-transplantation, HE × 100.

In liver transplantation, liver biopsy is currently used to confirm the clinical diagnosis, to assess the degree of necroinflammatory injury or fibrosis, to evaluate a space-occupying lesion, and to evaluate the changes following therapeutic intervention. Since liver biopsy plays an important role in the diagnosis and management, a representative tissue sampling is needed. Ideally, a good biopsy sample should include at least 4 portal tracts. The subcapsular hepatic parenchyma is avoided in interpretation, as it often contains fibrous extensions from the capsule and has some injuries during peri-operative period[5].

Preservation-reperfusion injury (PRI) refers to any injury during donor liver harvesting, cold storage as well as liver implantation. It is a major contributing factor to primary allograft failure after orthotopic liver transplantation. Clinically, it is characterized by high serum aspartate transaminase (AST) levels in the early postoperative period without technique problem, hepatic artery thrombosis and hyperacute rejection. To date, the pathogenesis of PRI is not very clear and there are no consistent histological evaluation criteria for PRI. A number of histological features have been observed in our group. For example, the predominant features of reperfusion especially at the first several hours after re-vascularization were sinusoidal endothelial cell impairment with neutrophilic cells infiltration; hepatocyte injuries such as ballooning change, centrilobular cholestasis and apoptosis become predominance at late course of reperfusion. It is suggested that sinusoidal endothelial cells are more susceptible to PRI than hepatocytes themselves. Busquets et al[7] found that there were 17% PRI out of 162 postreperfusion liver biopsy specimens in their retrospective analysis. They also disclosed that if cold storage time longer than 12 h, intrahepatic biliary complications resulted from PRI were increased. Another report revealed that storage time exceed 10 to 12 h, late posttransplantation biliary strictures occurred in more than 25% of liver transplant recipients, 30% of patients with graft dysfunction needed retransplantation within the first 3 mo after transplantation[8].

Hepatic artery thrombosis (HAT) occurred in 2%-9% of adult transplantation recipients. It is the most frequent arterial complication in liver transplantation. Surgical technique, hemadynamic, immunologic factors, PRI and hypercoagulation have been suggested as the causes for HAT[9]. In Humboldt University Transplantation Center, among 1192 liver transplantation cases, 30 HAT were observed, resulting in an incidence of 2.5%. Re-transplantation was necessary in 46.7% of patients with HAT in that group[10]. The histological features in HAT showed severe midzonal hepatocyte necrosis and bleeding, especially in centrolobular of allograft.

Intrahepatic biliary injury (IBI) is characterized by non anastomotic biliary strictures and is a relatively late complication, usually diagnosed between 1 and 4 mo after liver transplantation. The incidence of IBI was 2%-10% of transplantation recipients. Clinically, there were repeated episodes of cholangitis and the necessity for re-transplantation was about 30%-50%. Accumulating evidence has shown that IBI is associated with ischemia, secondary to HAT, ABO incompatible blood group donors, and chronic ductopenic rejection as well as prolonged warm ischemic time or cold ischemic time prior to implantation[11-14]. IBI occurred in 2 cases of our group 2-3 mo after operation. One of which was secondary to HAT (the donor liver with warm ischemia was 5 min, cold storage time was 9 h), another case of IBI showed warm ischemia for 7 min, cold storage time was 8 h for donor liver. It is suggested that improved hepatic artery supplying and the lowest total ischemia time may reduce the incidence of IBI.

Drug-induced hepatic injury (DIHI) is the “hot” but also troublesome problem in hepatic diseases. Therapeutic drugs such as corticosteroids, azathioprine and cyclosporine A in transplantation recipients could cause liver damage[15]. However, the report about DIHI after liver transplantation is rare. Recently, an introductory review about drug-induced hepatotoxicity progress was published in The New England Journal of Medicine[16]. The most frequent hepatotoxic drug reactions could lead to moderate to severe injuries to hepatocytes with a clinical symptom that resembles viral hepatitis, characterized by a rapid onset of jaundice in association with elevated aminotransferase levels. Acute liver failure may develop after weeks of onset, particularly if the patient has continued the drug. The histological characteristics of DIHI include ballooning degeneration or steatosis of hepatocytes with cholestasis, centrolobular or midzonal hepatocyte dropout or necrosis, portal tracts with severe bile duct damage surrounded by lymphocytes, plasma cells and eosinophils with or without granulomas, and lobular disarray with acidophilic bodies and sinusoidal chronic inflammation. Since many pathological changes in DIHI overlapped with the features observed at acute or chronic rejection, PRI or viral hepatitis recurrence, the diagnosis of DIHI in transplantation population is more difficult than in non-transplant population.