During the past two decades, the incidence rate of pancreatic cancer has been increasing. Pancreatic cancer is extremely difficult to diagnose at early stage, and the prognosis is very poor. In spite of the developments in surgical and anesthetic techniques, the median survival time (MST) remains in the range of 7-11 mo, and only 3% of the patients were alive 5 years after diagnosis[1-6].

The local recurrence rate is extremely high even after curative resection. Evans et al[7] reported that more than 50% of patients with post-operative relapse were due to local recurrence. Local recurrence is the most uncomfortable event for patients, and often produces various complications, and decreases the patients’ quality of life. Thus, local control is an important issue for pancreatic cancer. IORT is one of the most potent local interventions. Saeki et al[8] reported that IORT could reduce pain and improve quality of life in patients with unresectable pancreatic cancer. In the present study, we investigated the survival time of advanced pancreatic cancer patients treated with intraoperative radiotherapy (IORT) combined with external beam radiation therapy (EBRT) following internal drainage.

From 1996 to 2001, 81 patients with advanced pancreatic cancer were treated at our hospital. The patients aged from 43 to 72 years with a median of 57 years. Fifty-nine patients were male and 22 were female. All the tumors had no interspace between the superior mesenteric vein and portal vein, and the blood vessel was wrapped by the tumor. All patients had jaundice, the blood total bilirubin ranged from 156 μmol/L to 402 μmol/L with a median of 304 μmol/L. Sixty-one (75.3%) 81 of the patients were given AP-237 or pethidine to relieve pain, and other 20 (24.7%) patients took oral acesodyne intermittently. No ascitic fluid and iver metastasis were noted. Among the 81 patients, 18 received ID + IORT, 25 received ID+IORT + EBRT (meanwhile, given 5-Fu 300 mg/m2 iv drip, 2 f/w), 16 received simple EBRT and 22 received simple internal drainage.

Under continuous epidural anesthesia, all patients underwent laparotomy and their tumors were found unresectable. Cholecystojejunostomy and choledochojejunostomy were performed for patients whose cystic ducts were obstructed and unobstructed after IORT.

IORT was administered using high-energy electron beams from a Varian Clinac linear accelerator for patients without distant metastases and severe cardiac and lung diseases. A cylinder of 5 cm × 5 cm to 8 cm × 8 cm, 5 to 8 cm in diameter, or an ellipse with an inclination angle of 10-30 degree was introduced into the patients to encompass the tumor bed and paraaortic lymph node area. The IORT dose was 15-25 Gy with a median dose of 20 Gy in a single fraction.

EBRT was administered mainly postoperatively by 6- or 15-MV photons from a linear accelerator, mostly using two portal veins from the anterior, left, right and/or posterior in directions. In the irradiated field, the paraaortic lymph node area and tumor or tumor bed were completely included with a margin of 3 cm. The usual median EBRT dose was 42 Gy (range, 30-45 Gy) with a daily fraction of 1.8-2.0 Gy, 5F/w. The patients, meanwhile, were given 5-Fu 300 mg/m2, iv drip, 2f/w.

The cause-specific survival rate was calculated and plotted from the day of operation using the Kaplan-Meier method with significance compared by log-rank test. 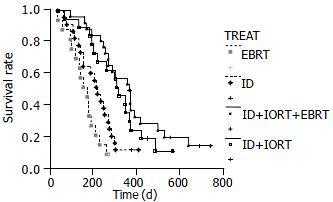 Three patients had the delayed gastric emptying after ID + IORT, and they recovered after given parenteral nutritional support for 4-5 wk. One patient died of liver and renal failure in the ID + IORT group. Intestinal perforation and digestive tract bleeding were unrelated to ID + IORT. Nausea, decreased appetite and frequent defecation were found early after ID + IORT + EBRT. One patient died of liver and renal failure after simple internal drainage, and 2 patients had delayed gastric emptying and 1 wound infection. No significant difference in the occurrence rate of complications was observed among different treatment methods (P > 0.05).

The goal of IORT is used to enhance regional tumor control, and have been IORT is used in most modern protocol studies as a radiation boost component of multidisciplinary treatment approaches. More recently, clinical experiences have shown that IORT could improve local control and disease-free survival time, especially when it was used in adjuvant setting, combined with external beam irradiation in some neoplasms such as cancer of the stomach, pancreas, colorectum, and soft tissue sarcoma[9].

The use of IORT for unresectable pancreatic cancer has been reported by several groups. Many reports failed to prove its survival benefit[9,10]. Miyamatsu demonstrated that the MST to IORT group was 7.6 mo, compared to 3 mo for palliative therapy group, with no statistical significance[10]. Ouchi proposed that IORT was not beneficial to either survival or quality of life[11]. Shibamoto reported that among non-stage IV patients, the median survival of the EBRT + IORT group (8.5 mo) and the EBRT group (8 mo) was similar, while in stage IV patients, the prognosis was not influenced by the type of radiotherapy[12]. In contrast to these results, survival advantage with IORT was reported by several groups. Literature data suggested the use of schedules with IORT had a better local control and perhaps a better survival than surgery alone or the palliative treatment[13]. Tanada demonstrated a significant difference in the survival rate between IORT cases and no treatment cases (median survival of 212 d and 109 d, respectively)[14]. Dobelbower reported that the median survival time of patients treated with radical surgery alone was 6.5 mo. The median survival time for the surgery plus IORT group was 9 mo, and 33.3% (2 of 6) of these patients survived longer than 5 years. This survival pattern was significantly better than that for the surgery alone group. The surgery plus EBRT and the surgery plus IORT and EBRT groups had a median survival time of 14.5 and 17.5 mo, respectively. These were significantly better than that of the surgery alone group. The addition of radiation therapy did not increase the treatment complication rate[15].

Patients with advanced pancreatic cancer usually have symptoms such as obstructive jaundice, poor appetite, fatigue and weight loss. Therefore, relief of symptoms, especially relief of obstructive jaundice and improvement of liver function, is clinically beneficial to these patients. In the colligation treatment, internal drainage has been used for the extinction of obstructive jaundice, enhancement of appetite and improvement of liver function, which was also beneficial to IORT and EBRT[16,17]. IORT has also been used in an attempt to increase the radiotherapy dose on the target without damaging surrounding normal tissues. A higher radiation dose could be given to the target tumor by combining IORT with EBRT[11,18]. Our studies showed that colligation treatment (ID + IORT + EBRT) could relieve jaundice, pain, improve quality of life, diminish tumor and prolong survival time in patients with unresectable pancreatic cancer.

Among the groups of ID + IORT, surgery, ID + IORT + EBRT, jaundice was improved quickly. However, it was not obviously improved in EBRT group. Pain was not relieved in surgery group, but obviously relieved in 75%-92% of the patients in the other groups. So radiotherapy had a good and a long-term pain relieving effect. IORT relieved pain quickly and could kill the remnant tumor, better than drugs. The tumor was not reduced in size in surgery group, while in the other groups, the tumor size was decreased in varying degrees, with no statistical significance (P > 0.05).

Complications resulting from surgery and radiotherapy occurred in 9.3% of patients (4/43) in both ID + IORT and ID + IORT + EBRT groups. No major side effects were noted during the course of treatment. Schwarz reported IORT was not related to a significantly increased risk of complications, hospital stay, or survival hazard[19]. Though a very small amount of normal tissues was exposed in IORT, complications often occurred if radiotherapy dose was too big. The safety level of a radiation dose for IORT alone is limited to 30 Gy[20]. The dose in IORT ranging from 20 Gy to 25 Gy combined with the dose in EBRT ranging from 40 Gy to 50 Gy was considered to contribute to the improvement of prognosis without causing serious side effects[21].