AIM: To assess CT, MR manifestations and their diagnostic value in hepatic tuberculosis.

METHODS: CT findings in 12 cases and MR findings in 4 cases of hepatic tuberculosis proved by surgery or biopsy were retrospectively analyzed.

CONCLUSION: Various types of hepatic tuberculosis have different imaging findings, and typical CT and MR findings can suggest the diagnosis.

Imaging features of hepatic tuberculosis have been described by several researchers at computed tomography (CT) and magnetic resonance imaging (MRI), the imaging appearance of these lesions is considered as nonspecific and, a histopathological or bacteriological confirmation is often required[4-7].

Of the 12 hepatic tuberculosis patients, 7 were male and 5 female, aged from 18 to 69 years (mean, 38.2 years). The diagnosis was proved by surgery (8 cases), liver biopsy (3 cases) and abdominoscopy (1 case). The duration of symptoms ranged from 1 to 18 mo. The most frequent clinical symptoms and signs were right upper abdominal pain (n = 10), upper abdominal tenderness (n = 8), low-grade fever (n = 8), night sweat (n = 6), weight-loss and fatigue (n = 5), abdominal mass (n = 1), hepatomegly (n = 4) and jaundice (n = 2). Among the 12 cases, 4 were accompanied by extra-hepatic tuberculosis. Laboratory test showed anemia (n = 10), raised erythrocyte sedimentation rate (n = 9) and abnormal liver function (n = 7). Tuberculin test was positive in 4 out of 5 patients tested. Eight patients were examined with ultrasound, but only 2 were correctly diagnosed. All the 12 patients had chest x-ray, and evidences of pulmonary tuberculosis were found in 2.

CT was performed with Siemens Somatom DR3 and HiQ units for the patients in routine fasting state. Some patients were given 500 mL of diluted iodinated contrast medium (10 g/L meglumine diatrizoate) orally 30 min before scanning. Scan scope ranged from the dome of diaphragm to the last plane of liver. All patients were examined with plain scanning at first and then using 600 g/L meglumine diatrizoate 60-80 mL for enhanced scanning with section thickness of 8-10 mm and internal of 10 mm.

RESULTS
CT findings of hepatic tuberculosis based on its pathologic classification 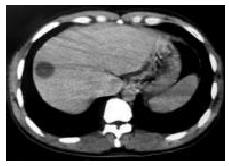 Figure 4 Nodular tuberculosis: cystic mass with 23 Hu in the right lobe of liver. 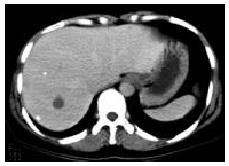 Hepatic tuberculosis is considered to be a rare clinical entity. Unless there was a high index of suspicion, the diagnosis was often overlooked[1,4]. Hepatic tuberculosis can be manifested by relatively nonspecific clinical presentation. The most frequent clinical symptoms and signs were right upper abdominal pain, upper abdominal tenderness, low-grade fever, night sweat, weight-loss and fatigue, abdominal mass, hepatomegly and jaundice[4,8,9]. Anemia, raised ESR, abnormal hepatic function and positive tuberculin test could be found in laboratory examinations.

Parenchyma type Miliary tuberculosis: This subtype is the most common form of hepatic tuberculosis and was found in 80-100% of autopsied patients with disseminated pulmonary tuberculosis[11]. It is depicted as multiple or diffuse miliary micronodular lesions (≤ 2.0 cm in diameter on CT), often as a part of tuberculosis in the whole body. So clinically it was not difficult to diagnose correctly[9,12]. Radiographic examination could detect hepatomegly and micronodular lesions, but it was extremely difficult to find noncalcificated lesions with less than 0.5 cm in diameter with CT[12-17]. In this series, CT revealed multiple, miliary, micronodular, hypodense lesions (> 0.5 cm in diameter) scattered in liver in 2 cases with miliary calcifications in one case.

Nodular tuberculosis: The lesion, with a diameter > 2 cm, is less common and has been found to be fused by miliary lesions or micronodular lesions[4]. Because nodular lesion is apt to be found by CT and MRI, most reported hepatic tuberculosis belongs to nodular tuberculosis[10,12-15,17-28]. Pathological features of this subtype are more complex than those of other subtypes. If tuberculous granuloma had no evident caseating necrosis or had a large amount of fibrous tissue existed, CT revealed a hypodense mass with slightly peripheral enhancement and no features on imaging findings could be found, it was difficult to diagnose it correctly[13]. In tuberculous granuloma, when calcium deposited calcificans punctata or even “powdery” calcificans, it might appear in the hypodense lesion that could be detected on CT and is therefore helpful to the diagnosis[6,13,24-26]. Two cases in this study were found to have calcificans punctata in the lesion center. When marked caseation or liquefaction necrosis emerged in the center of tuberculous granuloma, it means tuberculous abscess was formed and CT manifestation would be a cystic lesion with slightly or no enhanced rim[12,17,18]. In this study there were two isolated cystic masses with no marked enhancement. Compared with liver cyst, the CT findings of the isolated cystic masses were higher than those of liver cyst and the wall of isolated cystic was more blurring. When multiple micronodular lesions fused into macronodular mass, CT present as a “clunter” sign or a mutilotulated cystic mass with mutilobulated enhancement[13,19], which could be considered as a special CT feature but small pyogenic hepatic abscesses needed to be ruled out firstly[29]. Such manifestation was characterized by a less marked enhancement and a shorter duration, being different from bacterial hepatic abscess. Three cases in this study were found.

Tuberculous cholangitis Tuberculous cholangitis is rare and occurs mainly in children. Obstructive jaundice is the most common in clinic. Pathology revealed regional or diffuse duct dilation with duct wall thickening and stiffening[8]. Imaging findings showed irregular dilated intrahepatic ducts or diffuse miliary calcifications along the course of the bile ducts. The latter was considered as a typical feature of tuberculous cholangitis[13,30]. In our case, CT demonstrated mild diffuse hepatomelgy, marked dilated intrahepatic ducts and multiple flecked calcifications in the porta hepatis, complicated with tuberculous peritonitis.

Serohepatic type Serohepatic type of hepatic tuberculosis is the most uncommon one in the 3 types and was depicted as miliary tuberculous lesions in the subcapsule of liver or “frosted liver”, formed by thickened subcapsule[8]. To our knowledge, the imaging findings of this type have not been reported. In our case, CT revealed multi-nodular hypodense lesions in the subcapsule of liver and thickened subcapsule of quadratus lobe. On MRI, multi-nodular lesions appeared as hypointense areas on T1-weighted imagings and as hyperintense areas on T2-weighted imagings, with slightly peripheral enhancement after contrast administration. The features of CT and MRI were consistent with pathological features.