AIM: To investigate the importance of direct contact between Kupffer cells (KCs) and hepatocytes (HCs) during hepatic inflammatory responses, and the effect of leflunomide’s active metabolite, A771726, on cytokines in KCs, HCs and KC cocultures (DC cocultures).

METHODS: KCs and HCs in liver were isolated by digestion with pronase and collagenase. Lipopolysaccharide (LPS) -induced inflammatory response in monocultures of rat HCs and KCs was compared with that in DC cocultures. Tumor necrosis factor-α (TNF-α) and interleukin-1 (IL-1) concentrations in different culture supernatants were measured with ELISA. TNF-α mRNA in KCs of inflammatory liver injury was analyzed with reverse transcriptase polymerase chain reaction (RT-PCR).

RESULTS: DC cocultures strongly exhibited the production of TNF-α and IL-1 compared with other cultures, and these cytokines were mainly produced by KCs, especially by activated KCs. Time course studies revealed an increased production of TNF-α preceding the IL-1 production, suggesting that increased TNF-α levels could be involved in the increase of IL-1 production. Leflunomide’s active metabolite, A771726, had significantly inhibitory effect on TNF-α and IL-1 at protein and transcription levels, and the reduced production of IL-1 by A771726 was associated with the inhibitory action of A771726 on TNF-α.

Tissue inflammation plays a critical role in liver pathology via induction of cellular injury. In fact, infiltration of mononuclear phagocytes into the liver correlates with the severity of liver injury. Moreover, proinflammatory cytokines such as tumor necrosis factor-α (TNF-α) and interleukin-1 (IL-1) have been linked to the promotion of liver injury[1-3], and the anti-inflammatory cytokine interleukin-10 (IL-10) was believed to inhibit liver injury[4,5]. Kupffer cells (KCs) are among the first cells that respond to endotoxins, including lipopolysaccharides (LPS), and are considered to be the primary macrophages involved in the clearance of gut-derived bacteria or bacterial toxins. High portal level of LPS could lead to a pronounced secretion of proinflammatory mediators by KCs and ultimately to endotoxin-induced liver injury[6,7]. KCs are located in hepatic sinusoids and lie in between or on top of endothelial cells. However, they do have direct cell contacts with parenchymatous hepatocytes (HCs) through their cytoplasmic extentions. Cellular communication between KCs and HCs has been thought to occur mainly by production of cytokines and excretion of inflammatory mediators such as eicosanoids, nitric oxide (NO), and/or reactive oxygen species (ROS)[8,9]. Proinflammatory cytokines, TNF-α and IL-1in particular, have been shown to be early and important mediators of HC injury[8,10].

Leflunomide, an isoxazole derivative and a unique immunomodulatory agent, is capable of treating rheumatoid arthritis, allograft and xenograft rejection, systemic lupus erythematosus, Crohn’s disease, and prostate cancer[11-16]. Leflunomide is a prodrug that could be rapidly converted in the cell to an active metabolite, A771726[17-19]. Our investigations demonstrated that leflunomide had therapeutic actions on acute and chronic liver diseases[20-22]. In order to study the mechanisms of leflunomide on liver injury, the interaction between KCs and HCs in vitro, and the effect of leflunomide’s active metabolite, A771726, on TNF-α and IL-1 were investigated.

The procedure for isolation of rat HCs was based on Seglen’s method[24], with some modifications. The obtained cell suspension was diluted in modified Hanks’ buffered salt solution (pH7.65, 4 °C, 9.2 mmol/L HEPES, 9.91 g/L Hanks’ buffered salt solution without Ca2+ and Mg2+) and centrifuged at 200 g for 5 min. The supernatant was discarded, and cells were resuspended with PBS (pH7.4) to a final volume of 100 mL and centrifuged for 2 min at 50 g. The supernatant, containing mainly nonparenchymal cells, was collected for isolation of KCs (see Preparation of KCs). Pellets containing mainly HCs were resuspended in RPMI 1640 medium and washed 4 times for 2 min at 50 g. After the final wash step, cells were counted and diluted with RPMI 1640 medium supplemented with 50 mL/L FBS, glutamine (2 mmol/L), and gentamicin (50 µg/mL) to a final concentration of 1 × 106 cells/mL. Viability of cultures was ≥ 95% as assessed by trypan blue dye exclusion. Light microscopic observations revealed a purity of 90%-95% HCs for HC cultures.

The procedure for KCs isolation was based on the method of Smedsrod et al[25], with slight modifications. Supernatants (see Preparation of HC cultures) containing mainly nonparenchymal cells were transferred to four 50 mL Falcon tubes followed by centrifugation at 50 g in a swing-out rotor at 4 °C for 2 min. This procedure was repeated twice to discard the remaining HCs. After the final step, supernatants were centrifuged at 200 g in a swing-out rotor at 4 °C for 10 min, and discarded. The resulting pellets were resuspended in PBS to a final volume of 40 mL. The nonparenchymal cell suspension was prepared by centrifugation on a double-layered (17.2%/11.5%) Nycodenz solution. After centrifugation at 1400 g for 20 min (4 °C), KCs and endothelial cells were present at the boundary between the upper and lower layers. The cell suspension containing both KCs and endothelial cells, was collected and centrifuged at 200 g for 10 min, and the resulting pellets were diluted with RPMI 1640 medium (without serum) and washed again. Hereafter, the pellets consisting of 50% KCs and 50% endothelial cells were diluted in RPMI 1640 medium (without serum) to a final concentration of 2 × 106 cells/mL. To separate KCs from endothelial cells, cells were plated on tissue culture plates at 37 °C and 50 mL/LCO2 for 30 min followed by a single wash step discarding the nonadherent endothelial cells. Viability of KCs was ≥ 95% as determined by trypan blue dye exclusion assay. Immunohistochemistry and fluoroscopy revealed a purity of ≥ 85% KCs for KC cultures.

Measurement of TNF-α and IL-1

After incubation with or without A771726 (0.001-10 µmol/L), KCs of inflammatory liver tissue were harvested and kept at -70 °C until RNA extraction. Total cellular RNA was extracted using RNA easy kits (Invitrogen, USA). To test the efficacy of reverse transcriptase, RT-PCR was performed for GDPH mRNA. Briefly, the first strain of cDNA was synthesized by reverse transcriptase and pooled. The resulting cDNA samples were adjusted to PCR buffer conditions and run for PCR simultaneously. The primers for TNF-α were 5’-CGAGTGACAAGCCCGTAGCC and 5’-GGATGAACACGCCAGTCGCC. The primers for GDPH were 5’-CCACCCATGGCAAATTCCATGGCA and 5’-TCTAGACGGCAGGTCAGGTCCACC[26]. The amplification of TNF-α and GDPH genes was expected to generate 753 bp and 600 bp fragments, respectively. Amplification was performed for 35 cycles, each consisting of denaturation at 94 °C for 1 min, annealing at 51 °C for 1 min, and extension at 72 °C for 2 min. Ten µL of reaction mixture was loaded to 10 g/L agarose gel containing 0.5 µg/mL ethidium bromide for electrophoresis, the gel was then placed under ultraviolet ray for semi-quantitation detection. 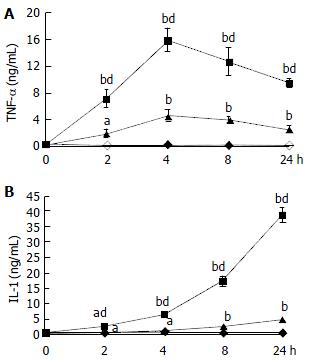 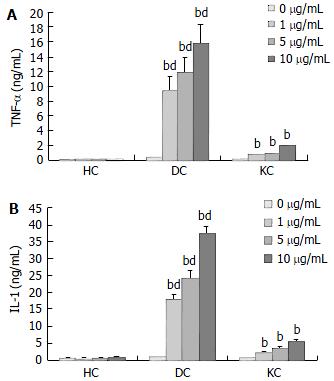 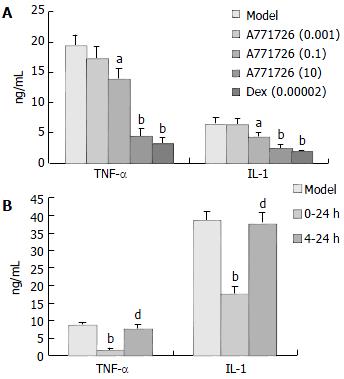 A771726 had significantly inhibitory actions on the production of TNF-α in supernatants of DC cocultures. To gain insights into the potentially inhibitory action of A771726 on TNF-α via transcriptional level, TNF-α mRNA was analyzed by RT-PCR in KCs during liver inflammation induced by injection with BCG and LPS. Gel electrophoresis and semiquantitation analysis showed that A771726 significantly reduced the expression of TNF-α mRNA in KCs of inflammatory liver tissue induced by BCG and LPS (Figure 4, Table 1). 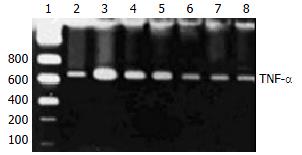 In the intact liver, HCs are in direct contact with KCs. The present experiments were designed to assess whether direct contact between HCs and KCs was of influence on the LPS-induced inflammatory response. When compared the production of TNF-α and IL-1 in the different culture types, direct cell-to-cell contact between KCs and HCs seemed to be essential, because an 4- or 7-fold increase of TNF-α and IL-1, could be observed in DC cocultures. Although the cytokine levels in KC cultures were markedly lower than those observed in DC cocultures, incubation of KC cultures with LPS still resulted in an abundant cytokine response. LPS-induced cytokine expression in DC cocultures or KC cultures has been extensively studied, but in this study we showed that direct contact between KCs and HCs significantly increased TNF-α and IL-1 production by rat KCs. However, the levels of two cytokines in HC cultures showed no statistically significant changes throughout the experiments. The results indicated proinflammatory mediators such as TNF-α and IL-1 in culture supernatants were mainly produced by KCs, especially activated KCs. Time course studies performed with these cultures revealed an increased production of TNF-α preceding the IL-1 production, suggesting that increased TNF-α levels could be involved in IL-1 production. The results were consistent with Shito’s report[1] that TNF-α could be a cause of liver injury and might help regulate the expression of IL-1.

Leflunomide was mainly used to inhibit the activity of dihydroorotate dehydrogenase (DHODH) involved in de novo pyrimidine biosynthesis. But at a high concentration, it mainly inhibited protein tyrosine kinases initiating signaling, and therefore reduced the cell response to mitogens and cytokines. Recent evidences suggested the anti-inflammatory and immunoregulatory effects of leflunomide were related with its ability to suppress TNF-α and IL-1 selectively over their inhibitors in T lymphocyte/monocyte activation, and the activation of nuclear factor kappa B, a potent mediator of inflammation when stimulated by inflammatory stimuli. We found that TNF-α and IL-1 levels in supernatants of DC cocultures were apparently inhibited by A771726 (0.1, 10 µmol/L, 0-4 h) and A771726 (10 µmol/L, 0-24 h). However, TNF-α and IL-1 levels in supernatants of DC cocultures were not affected in A771726 (10 µmol/L, 4-24 h) group, and the levels of the two cytokines in A771726 (10 µmol/L, 0-24 h) group were significantly lower than those in A771726 (10 µmol/L, 4-24 h) group. The results indicated that the inhibitory action of A771726 on TNF-α and IL-1 levels was generated mainly from 0-4 h incubation, and reduced production of IL-1 by A771726 was associated with the inhibitory action of A771726 on TNF-α. Furthermore, RT-PCR analysis showed that A771726 significantly reduced the expression of TNF-α mRNA in KCs of inflammatory liver tissue induced by BCG + LPS. The results showed A771726 had significantly inhibitory effects on production of TNF-α in KCs at transcriptional level.

Although further work is required to demonstrate whether A771726 has other targets in inflammatory liver injury, A771726 can inhibit hepatocyte damage by inhibiting proinflammatory cytokine release from KCs.