AIM: To analyze the structure and expressions of the protein encoded by an HCC-associated novel gene, lysosome-associated protein transmembrane 4 β (LAPTM4B).

RESULTS: LAPTM4B encoded two isoforms of proteins with molecular masses 35-ku and 24-ku, respectively. The expression level of LAPTM4B-35 protein in HCC tissues was dramatically upregulated and related to the differentiation status of HCC tissues, and it was also high in some cancer cell lines. Computer analysis showed LAPTM4B was an integral membrane protein with four transmembrane domains. LAPTM4B showed relatively high homology to LAPTM4A and LAPTM5 in various species.

CONCLUSION: LAPTM4B gene encoded two isoforms of tetratransmembrane proteins, LAPTM4B-35 and LAPTM4B-24. The expression of LAPTM4B-35 protein is upregulated and associated with poor differentiation in human HCC tissues, and also at high levels in some cancer cell lines. LAPTM4B is an original and conserved protein.

We have previously reported the cloning and identification of a novel gene, which was designated by the International Nomenclature Committee as lysosomal associated protein transmembrane 4 β (LAPTM4B)[1-4]. LAPTM4B was overexpressed in 87.3% human hepatocellular carcinomas (HCC) at mRNA level performed by Northern blot[2]. BLAST program analysis showed that the LAPTM4B gene was mapped to chromosome 8 q22.1, spanning approximately at least 50 kb. It is composed of seven exons separated by six introns. The cloned full-length cDNA sequence (GenBank accession number: AY057051) of LAPTM4B is 2.2 kb and contains two ATGs at the 5’end with an interval of 273 bp and two polyadenylation signals: aataaa and aattaaa[2].

In this study, primary structures of proteins encoded by LAPTM4B gene were analyzed using bioinformatics. Specific polyclonal antibodies directing against two epitopes of the 10-peptides localized at the N-terminus (28-37aa) and in between the 3rd and 4th transmembrane domains (232-241aa) of LAPTM4B, respectively, were prepared. The expressions of LAPTM4B proteins in HCC, paired noncancerous liver (PNL), normal liver (NL) tissues and various cancer cell lines were detected by Western blot. The functions of LAPTM4B protein was discussed.

The tissues stored at -80 °C or living cells were homogenized and extracted with lysis buffer (pH7.6) containing 10 mmol/L Tris, 150 mmol/L NaCl, 1 mmol/L EDTA, 5 g/L NP40, 1 mmol/L PMSF, 1 μg/mL aprotinin, 1 μg/mL pepstatin A. After centrifugation at 12000 g for 10 min at 4 °C, the supernatants were collected and the proteins were quantitated by Bradford microassay.

Two KLH-conjugated 10 peptides (KLH- Ala-Lys-Gly-Thr-Asp-Pro-Ala-Glu-Ala-Arg and KLH-Pro-Tyr-Arg-Asp-Asp-Val-Met-Ser-Val-Asn) were synthesized by Invitrogen Company. Rabbits were immunized subcutaneously with 1 mg of KLH-peptide conjugates emulsified in Freund’s complete adjuvant (GIBco BRL). The immunization was repeated with the antigens in Freund’s incomplete adjuvant (GIBco BRL) 4 wk after the first injection and 2 wk after the second injection. The anti-sera were designated as LAPTM4B-N28-37-pAb and LAPTM4B-EC2-pAb, respectively. The titers of these two sera were both above 1 × 105 detected by ELISA with peptide-coated plates. The pre-immune sera did not show any reactivity to the peptides.

Proteins in cell lysates were fractionated by 100 g/L SDS-PAGE and then electrotransferred onto a nitrocellulose filter (Bio-Rad). The filters were blocked at 4 °C overnight with blocking buffer (pH7.6) containing 50 g/L fat free dry milk. Then the filters were incubated with indicated antibody for 2 h at room temperature. After washed with TBST (pH6.0), the filters were incubated at room temperature for 1 h with horseradish peroxidase conjugated goat anti-rabbit IgG at 1:2000 dilution in TBS-5 g/L fat free dry milk. Immunoreactive bands were visualized using ECL detection reagents (Santa Cruz).

The primary structure of LAPTM4B is shown in Figure 1. The LAPTM4B cDNA may encode two putative proteins with 35 ku (317 aa) and 24 ku (226 aa). Computer analysis (PCGENE) showed that LAPTM4B was an integral membrane protein with four highly conserved hydrophobic transmembrane domains, forming two extracellular loops (EC1 and EC2), a cytoplasmic loop and intracellular amino- and carboxyl tails. The transmembrane regions were located at 117-133, 163-179, 200-216, and 243-259 aa, respectively. The full amino acid sequence contained one N-glycosylation site, eight phosphorylation sites, and four N-myristoylation sites. A tyrosine phosphorylation site was predicted at 285 aa at C-terminal region, which depending on phosphorylation might form a binding site for specific SH2 domain in some signaling proteins. It was also predicted that LAPTM4B containing proline-rich motif (PXXP) at N-terminal region would be a SH3 domain binding protein. Moreover, LAPTM4B contained typical lysosomal targeting signals (3 YXXΦmotifs)[11] at C-terminal region. Human LAPTM4B shared 92% homology with mouse LAPTM4B (GenBank accession number: AAH1912)[12] at amino acid level, suggesting that LAPTM4B was highly conserved within vertebrate species. The region from 140 aa to 317 aa of LAPTM4B was highly conserved compared with mouse LAPTM4B. But the N-terminal region from 1 aa to 91 aa (between the first ATG and the second ATG) of LAPTM4B-35 was highly specific and no homological sequence was found using BLAST in nr database. LAPTM4B also showed 46% homology to a lysosomal tetra-transmembrane protein, LAPTM4A, at amino acid level. The orthodog of LAPTM4A in murine was a nucleoside transporter in intracellular membrane-bound compartments, and mediated a multidrug resistance phenotype in drug-sensitive strains of S. cerevisiae[12-14]. 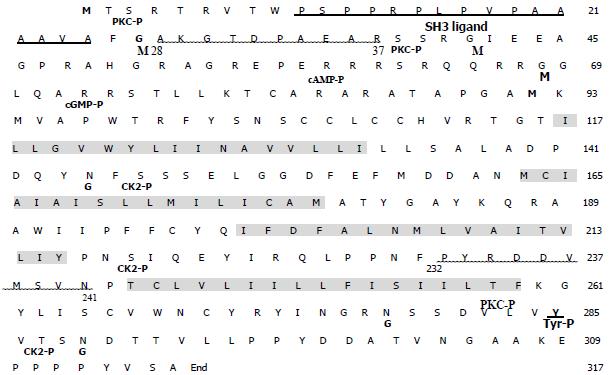 The phylogenic tree (Figure 2) was constructed according to multiple sequence alignment results. It showed that LAPTM4B, LAPTM4A and LAPTM5 proteins were distributed in clusters. Human LAPTM4B showed the most close homology to Mus musculus and also had certain homology to Dannio rerio and Fugu rubripes, as well as Drosophila melanogaster, but was far-away from Yeast. In addition, LAPTM4B showed relatively high homology to LAPTM4A and LAPTM5 in various species to a certain extent, and LAPTM4B was closer to LAPTM4A than LAPTM5. These results indicated that LAPTM4B was an original and conserved protein.

As shown in Figure 3, 2 proteins with molecular masses 35-ku and 24-ku both reacted with LAPTM4B-EC2-pAb were identified by Western blot in HCC, PNL and NL tissues, and designated as LAPTM4B-35 and LAPTM4B-24, respectively. Nevertheless, only one band at the 35 ku position appeared when LAPTM4B-N28-37-pAb was used for Western blot in HCC tissues, indicating that LAPTM4B-35 was translated from the whole ORF and initiated from the first ATG, whereas LAPTM4B-24 was translated from the second ATG. Furthermore, LAPTM4B proteins were significantly overexpressed in HCC tissues than in PNL and NL tissues. Notably, the expression levels of LAPTM4B-35 were significantly related to the differentiation status of HCC tissues, they were higher in poorly differentiated HCCs than in moderately and well differentiated HCCs (Figure 4)[4]. In addition, the ratio of LAPTM4B-35 to LAPTM4B-24 was remarkably higher in HCC than in PNL and NL (Table 1). However, the ratio of LAPTM4B-35 to LAPTM4B-24 in PNL was kept at the same level as in NL, even though LAPTM4B-35 and LAPTM4B-24 were both slightly increased. Thus the development of HCC might be associated with the raised ratio of LAPTM4B-35 to LAPTM4B-24. 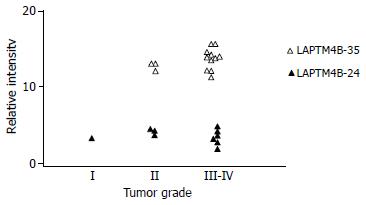 HCC is one of the most common cancers world-wide, and is the major cause of malignant deaths in Asia and Africa[18-20]. The pathogenesis of HCC is particularly complex. The current model for HCC carcinogenesis postulated a multistage progression involving an accumulation of genetic alterations[21,22], including activation of oncogenes N-ras, H-ras, K-ras, c-erbA, c-met, and c-myc etc.[23,24], repression or mutation of tumor suppressor genes[25], besides the transcriptional activation of c-jun and nuclear factor NF-κB by HBV and HCV[26,27]. But the roles of these genes in cell proliferation, differentiation, and premalignant status in liver malignancy are far from elucidated.

We previously reported[2] that LAPTM4B was a novel gene associated with HCC, and significantly overexpressed in HCC as shown via Northern blot and in situ hybridization. LAPTM4B is also widely expressed in human tissues with a relatively high level in the testis, heart and skeletal muscles, and moderately in the ovary, kidney and pancreas, and poorly in the liver, spleen, and thymus, and lowest in the lung and peripheral leukocytes. It was remarkably overexpressed in 87.3% (48/55 cases) HCC tissues when compared with PNL and NL tissues. Furthermore, the LAPTM4B mRNA expression levels were significantly related to the differentiation status of HCC tissues. They were highest in poorly differentiated HCCs, higher in moderately differentiated HCCs, and relatively low in well differentiated HCCs.

Here we report the expressions of LAPTM4B proteins in HCC, PNL, NL and a number of cell lines via Western blot analysis using two antibodies, LAPTM4B-N28-37-pAb or LAPTM4B-EC2-pAb, which were prepared by immunization with two KLH-conjugated 10-peptides whose sequences are localized at either the second extracellular loop (EC2) between the third and fourth transmembrane regions or the N-terminal region in the cytoplasma. These two 10-peptides used as immunogens were highly specific, i.e. having very low homology compared to known proteins of Homo sapiens. By using PCGENE software, the 10-peptides should have characteristics of high hydrophilicity and no residues of putative glycosylation and phosphorylation. KLH was conjugated with the N-termini of 10-peptides in order to increase immunogenicity. Two isoforms of LAPTM4B, LAPTM4B-35 and LAPTM4B-24, whose mass was coincident with the predicted products translated from the first and second ATG in ORF, were identified. Expressions of LAPTM4B-35 proteins were highly upregulated in HCC with poor differentiation. This result was coincident with expression of LAPTM4B mRNA in HCC tissues. LAPTM4B expressions were also high in human HCC cell lines and some other cancer cell lines. Transient transfection of murine BHK cells was performed with two plasmids, pcDNA3/LAPTM4B-AE containing a full-length cDNA of LAPTM4B ORF and pcDNA3/LAPTM4B-BE containing the same ORF sequence but with 273 nucleotides deleted at 5’ end, respectively. The transfectants in AE-series expressed mainly LAPTM4B-35 and slightly LAPTM4B-24, and proliferated very rapidly and formed colonies powerfully. However, the transfectants in BE-series expressed only LAPTM4B-24, and lost potentials of long term survival and growth. Therefore, it is suggested that LAPTM4B-24 may play an antagonistic role in cell survival and proliferation, and the equilibrium of LAPTM4B-35 and LAPTM4B-24 in expression is involved in controlling cell survival/proliferation and differentiation. The disequilibrium in expressions of LAPTM4B-35 and LAPTM4B-24 may be involved in malignant transformation of hepatocytes and carcinogenesis.