METHODS: Human liver cancer cell line was implanted into the dorsal subcutaneous tissue of 40 BALB/c nude mice. Then the 40 tumor-bearing BALB/c nude mice were allocated into treatment group (n = 32) and control group (n = 8). In the former group different doses of 32P-GMS were injected into the tumor mass, while in the latter nonradioactive 31P-GMS was injected into the tumor mass. The experimental animals were sacrificed on the 14th day. The ultrastructural changes of tumor in both treatment group and control group were studied with transmission electron microscopy (TEM) and stereology.

In recent years, nuclide labeled nontoxic and undegradable micro-carriers such as phosphorus-32 glass microsphere (32P-GMS)[1,2] and yttrium-90 glass microsphere[3-5] have been successfully developed and gained much attention as a new radioactive medcine for treating malignant liver neoplasms. Experimental researches using micro-carriers such as microsphere, microcapsule, nano-microsphere (nano-sphere), liposome and nano-liposome in treating malignant tumors have been carried out for more than a decade and gained much interesting development. Microspheres conjugated with anticancer drugs including traditional Chinese medicine could release drugs slowly into the cancer tissues, thus keeping their anti-cancer effect for a long time[6-9]. However, there are only a few reports about the researches of cytocidal effect of local internal irradiation of 32P-GMS on tumor cells. The ultrastructural stereology study of human liver cancer cell treated by 32P-GMS has not been reported[10,11]. So the authors used a human liver tumor-bearing nude mouse model to explore the anticancer effect of 32P-GMS and the ultrastructural stereology changes in the tumor with TEM.

32P-GMS By activating of standardized glass microspheres through nuclear-chemical reaction, nonradioactive 31P (31P-GMS, cold sphere) was transformed into radioactive 32P glass microsphere (provided by Nuclear Power Research Institute of China). It had the following properties. The diameter of glass sphere was 46-76 mm, 32P physical half-life was 14.28 d, average β ray energy per disintegration was 0.695 MeV, and soft tissue penetration distance was max. 8.0 mm, averaging 3.2 mm. 32P-GMS suspension was prepared by mixing 32P-GMS with super-liquidized iodized oil or 500 g/L glucose solution to the concentrations of 370 MBq.mL/L and 37 MBq.mL/L on an oscillator.

Preparation of electron microscopcial sections Biopsy specimens from all the tumors and their adjacent tissues were immediately placed in 40 g/L glutaraldehyde and allowed to stand for 2 h at room temperature. Then the tissue was washed 3 times and postfixed for 1 h in 10 g/L osmium tetroxide. After rinsed in distilled water and dehydrated in acetone, the tissue specimens were embedded in Epon 812, polymerized for 48 h, ultrathin sectioned and stained. The electron microscopical sections were viewed in a H600 transmission electron microscope. At the same time, all specimens from tumors and their adjacent tissues were subjected to gross inspection, light microscopy to observe the morphological changes, and compared with the ultrastructural changes, and then the death rate of tumor cells was calculated. Death rate = the number of death cells/the number of total cells.

Method of stereological study Test grid method was used[12]. The areas of teat web was 120 mm × 90 mm, and the length of each small grid was 5 mm. There were 432 tested dots in test web. The TEM pictures were magnified to 30000-fold, and 30 pictures were taken in each group. When the picture was tested, the test web was put on the picture to test the constructure observed. Stereological parameters (volume density Vv; surface density Sv) were used to test the cell organallae such as nucleus, nucleolus, RER and mitochondron, lysosome, lipid, vesicles and membrane of microvilli and canaliculi. The point counting method was used. The standard deviation and standard error of stereological parameters in each group were calculated. The statistical method used was t test.

The formula of volume density Vv is 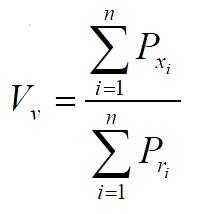 The formula of surface density Sv is 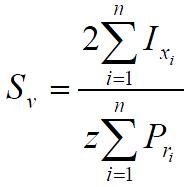 In the treatment group, the tumor cells of subgroup A revealed necrotic injury and a lot of tumor cells were killed (Figure 1A). In the severely injured cells the nuclei lysed, cell membrane disrupted and numerous debries were found. The injured tumor cells showed condensation of nuclear chromatin, peripheral aggregation of heterochromatin in pieces, damaged organellae in cytoplasm, disappearance of mitochondrial cristae and ribosomes, appearance of a few of vacuoles and lipid particles. The death rate of tumor cells in the subgroup A was much higher (70%). In subgroup B, many tumor cells presented histological structures similar to those in subgroup A (the death rate: 65%), but with many lysosomes. Some were differentiated tumor cells with the characteristics of round nuclei with small nucleoli, evenly distributed chromatin, mainly euchromatin, lots of mitochondria and rough endoplasmic reticula in the cytoplasm, formation of plenty of microvilli at the interface of tumor cells (Figure 1B). The capillaries between the moderately differentiated tumor cells had thickened or loosened basal membranes with local defects. Abundant fibroblasts and collagen fibers could be found in the matrix. There was a tendency to form bile canaliculi somewhere between tumor cells (Figure 1C). Under light microscope, the tumor tissues both in subgroups A and B showed scattered focal necrosis. The tumor cells in subgroup C (the death rate: 50%) showed different morphologic appearances, some damaged mildly and others severely, but some were moderately differentiated with plenty of cytoplasmic free polyribosomes. Plasma cells were scattered among the tumor cells, and some lymphocytes protruded the pseudopodia when they were contacted with the tumor cells. There were residual tumor cells showing active proliferation. In subgroups D and E (the death rate: 35%), the histological structure was manifested in various complicated forms, and active multiplication of tumor cells was readily seen. Under light microscope, the histological characteristics in subgroups C, D and E were the arrangement of tumor cells transformed from dense to loose with scattered spot necrosis. No abnormality was found in the muscle and dermal cells of adjacent skin nearby the tumor. 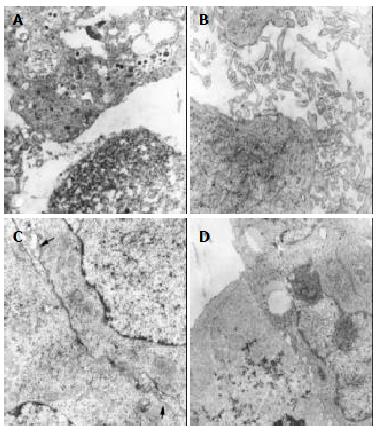 Figure 1 Ultrastructural characterictics of effect of 32P-GMS on human hepatocellular carcinoma. A: Necrosed tumor cells (× 12000); B: Microvilli on the surface of tumor cells and mitochondria in cytoplasm (× 18000); C: Formation of bile duct-like structure in tumor cells (arrow, × 18000); D: Heteromorphic tumor cells with cleavage of nuclei and scanty microvilli on surface (× 12000).

In the control group, most tumor cells were poorly differentiated and rapidly multiplicated (Figure 1D), with characteristics of irregular large nuclei with deep indentations and plenty of chromatins, several peripherally aggregated large and prominent nucleoli. In cytoplasm, a lot of free polyribosomes, vacuoles and lipid particles were presented, while mitochondria, glycogen and rough endoplasmic reticulum were scant. Only a few of dead cells (5%) were found in this group. In the nearby interstitial tissue infiltrated tumor cells, degenerative lymphocytes, damaged fibroblasts, loose collagen fibers were found.

The results of stereological analysis of ultrastructural morphology are summarized in Tables 1, Table 2 and Table 3.

On the 14th day of local injection of 32P-GMS to the tumor, the tumor cell death rate was 35%-70% in different treatment groups, and was 5% in control group. The results showed that local internal irradiation of 32P-GMS had cytocidal effects on tumor cells and the anticancer effect of 32P-GMS was directly proportional to the dose administrated.

Anticancer mechanism of 32P-GMS mainly includes two parts. The first is that β-ray energy of 32P-GMS could directly destroy or injury DNA of tumor cells to induce cell death because of the breakage, disaggregation and synthetic obstruction of DNA. The second is that β-ray irradiation conducted ionization and irradiation of the water molecules in intracellular environment to produce several kinds of free radicals and superoxides which indirectly killed the tumor cells by injuring the biological macromolecules[13,14]. Besides, researches also showed that β-ray could induce cell-death related gene expressions to accelerate the apoptosis of tumor cells[15]. Because 32P-GMS internal irradiation is one kind of continued low linear energy transfer (LET) irradiation, its indirect effect on tumor cells might be much more important[16].

Ultrastructure characterictics and significance of effect of 32P-GMS on tumor

In specimens of different treatment groups, the tumor cells might exhibit as survived, degenerative or necrosed (in early or typical changes). It seems that this reflected the whole course of tumor cell progression from degeneration to death after irradiation. The ultrastructural changes demonstrated that under the effect of high-dose irradiation, the tumor tissues received a lethal radiation energy in a short period, resulting in nonexistence of tumor cells which had a high ability to synthesize endogenous proteins. Under the appropriate dose of irradiation, besides the necrosis of most tumor cells, the tendency to derive to nearly normal histological pictures appeared, such as microvilli on the cell surface, formation of bile canaliculi-like structure. These demonstrated that 32P-GMS had the ability to kill actively proliferative tumor cells and to promote their normalization. On the other hand, proliferation of connective tissue after irradiation could lead to disorganization, which could destroy the survived tumor cells. This was consistent with what was reported[13]. At the lower dose of irradiation, plasma cells and some lymphocytes were scattered among tumor cells, but this was rarely seen in the high-dose subgroup. Whether the immune function during treatment can be enhanced to some extent is still unknown. The irradiation injured some interstitial tissues such as thickened or loosened basal membrane of capillaries with local defects and damaged collagen fibers. But acute irradiative inflammation was not found and the tissue adjacent the tumor was normal, indicating that local administration of 32P-GMS is safe.

Stereological ultrastructure analysis of effect of 32P-GMS on tumor

Differentiated malignant tumor cells have some characteristics under electron microscope. The general characteristics of poorly differentiated and rapidly multiplicated tumor cells included irregular large nuclei, peripherally aggregated large and prominent nucleoli, lots of free polyribosomes in cytoplasm, scanty mitochondria and rough endoplasmic reticulum[20,21]. The characteristics of differentiated tumor cells are different, including round nuclei with small nucleoli, mitochondria and rough endoplasmic reticula in the cytoplasm, formation of microvilli at the interface of tumor cells. There was a tendency to form bile canaliculi somewhere between liver tumor cells. Stereological results showed that Vv of nuclei (53.31 ± 3.46) and Vv of nucleoli (20.40 ± 1.84) in the control group were larger than those (30.21 ± 3.52 and 10.96 ± 2.52) in the treatment group respectively (P < 0.01) and Vv of RER (3.21 ± 0.54) and Vv of mitochondria (4.53 ± 0.89) in the control group were smaller than those (8.67 ± 1.25 and 7.12 ± 0.95) in the treatment group respectively (P < 0.01, 0.05). Sv of the membrane of microvilli and canaliculi (27.12 um2/100 um3± 11.84 um2/100 um3) in the control group was smaller than that (78.81um2/100 um3± 19.69 um2/100 um3) in the treatment group (P < 0.01). The results indicated that local administration of 32P-GMS could produce obvious anticancer effects, besides, it played a role in making poorly differentiated tumor cells become well differentiated ones, which was obviously beneficial to the prognosis and treatment of patient. Stereological study also showed that Vv of lipid particles (3.71 ± 1.97) and Vv of vacuoles (5.72 ± 1.58) in control group were much larger than those (0.30 ± 0.16, and 0.35 ± 0.15) in treatment group (P < 0.05, P < 0.01). There is a possibility that the cells with lipid particles and vacuoles were degenerative cells which were much easier to be killed by β-ray energy of 32P-GMS, so the Vv of lipid particles and vacuoles in treatment group was smaller than that in control group.