AIM: Although liver cirrhosis is a predisposing factor for hepatocellular carcinoma (HCC), relatively few reports are available on HCC in primary biliary cirrhosis. High plasma nociceptin (N/OFQ) level has been shown in Wilson disease and in patients with acute and chronic pain.

METHODS: We report a follow-up case of HCC, which developed in a patient with primary biliary cirrhosis. The tumor appeared 18 years after the diagnosis of PBC and led to death within two years. Alfa fetoprotein and serum nociceptin levels were monitored before and during the development of HCC. Nociceptin content was also measured in the tumor tissue.

RESULTS: The importance and the curiosity of the presented case was the novel finding of the progressive elevation of plasma nociceptin level up to 17-fold (172 pg/mL) above the baseline (9.2 ± 1.8 pg/mL), parallel with the elevation of alpha fetoprotein (from 13 ng/mL up to 3 480 ng/mL) during tumor development. Nociceptin content was more than 15-fold higher in the neoplastic tissue (0.16 pg/mg) than that in the tumor-free liver tissue samples (0.01 pg/mg) taken during the autopsy.

CONCLUSION: Results are in concordance with our previous observation that a very high plasma nociceptin level may be considered as an indicator for hepatocellular carcinoma.

The incidence of hepatocellular carcinoma (HCC) in primary biliary cirrhosis (PBC) is reported to range from 0.5% to 4.2%, which is somewhat less frequent than that in liver cirrhosis from other etiologies[1,2]. However, recent reports have shown an increasing trend. The incidence of HCC was found higher in stage III/IV than in stage I/II patients[1,3,4].

Relatively few prospective and comprehensive studies are available on HCC in PBC, and the number of case reports is also limited. Summarizing the data of the literature, 126 of 6 188 PBC patients (2.0%) were found to have HCC. Since HCC usually develops many years after the diagnosis of PBC, screening of HCC has clinical importance and offers best with hope for early detection. Serum AFP is a widely accepted marker of HCC[5]; however, using the conventional cut-off value of 500 ng/mL, it has a sensitivity of about 50% and a specificity of more than 90% in detecting HCC in a patient with coexisting liver disease[6]. The average survival of patients with HCC improved in the last decades[7]. Female HCC patients often have a better prognosis than male patients[8]. Because of the lack of sensitive markers of malignant hepatic tumors, HCC is usually recognized in the advanced stage.

We reported a follow-up case of HCC in a PBC patient. The importance of this case is the novel finding of progressive elevation in plasma nociceptin (N/OFQ, formerly named as orphanin FQ) up to 17-fold above the baseline, parallel with the elevation of alpha fetoprotein (AFP) during tumor development. Moreover, high nociceptin content was found in the tumor tissue as well.

Nociceptin, a newly discovered neuropeptide of 17 aminoacids, is the natural agonist of NOP receptor, earlier named opioid receptor-like 1 (ORL1) receptor. N/OFQ is a neuropeptide that is endowed with pronociceptive activity in vivo. Both the long and the short splice variants of the OP4 receptor mRNA were isolated in rat liver[9]; however, there are no data about its physiological or pathophysiological role in liver function. To date only few clinical studies on nociceptin were reported, and only one of them dealt with liver disease.

Findings of the presented case are in concordance with our previous observation that a high plasma NC level may be an indicator of HCC.

A 47-year-old woman was admitted for fatigue, itching, hepatomegaly, high alkaline phophatase and gamma-GT levels. Primary biliary cirrhosis was diagnosed based on the clinical symptoms, laboratory findings, AMA M2 positivity, normal US and ERCP pictures. Liver biopsy revealed stage II/III. There was no family history of liver disease or autoimmune disease, and all other confounding risk factors including alcohol, HBV and HCV infections were excluded. The patient was a heavy smoker. The past surgical history was significant only for an appendectomy and two caesarean sections. Her menopause started at the age of 38. Bone mineral density was slightly below the normal range at the time of diagnosis of PBC. Ursodeoxycholic acid (Ursofalk) treatment, calcium and vitamin D supplementation were introduced.

Severe progression of osteoporosis was observed during the following years. Five years after the diagnosis of PBC significantly decreased bone mineral density was shown both on the femoral neck (T-score: -5.12, Z score: -3.38) and on the lumbar vertebrae (T-score: -5.44, Z-score: -3.9). At the age of 57 despite the calcium, vitamin-D supplementation, calcitonin and bisphophonate (Fosamax) treatment, the severe osteoporosis led to hip fracture and multiple vertebral collapses, which made the patient lifelong disabled.

Progression of PBC to stage IV occured. She was monitored by yearly US, by regular laboratory tests and AFP every 3-4 months. For different reasons we collected blood samples for plasma nociceptin level determination as well. Sampling was done in conformity to accepted ethical standards and was approved by the regional ethical committee.

Hepatocellular carcinoma developed 18 years after the diagnosis of PBC. Regular follow-up US investigations revealed a focal lesion of 2.5 cm in diameter, which increased rapidly in segment V of the liver. Fine needle biopsy findings proved hepatocellular carcinoma. After the HCC diagnosis a continuous and rapid increase in the size of the tumor, an elevation of ALP, GGT, plasma nociceptin and AFP levels and clinical deterioration were observed.

The AFP value had been within the normal range one year before the tumor was detected (13 ng/mL), but it was elevated at the time of the diagnosis of HCC (426 ng/mL) and rose up to 3 480 ng/ml. The plasma nociceptin measured by radioimmunoassay 125I-Nociceptin-kit, Phoenix Pharmaceuticals, Phoenix, CA, USA (10.6 pg/mL) was within the normal range (9.2 ± 1.8 pg/mL) in the tumor-free stage, while progressive elevation was detected during the tumor development (15.8, 65.8, 103.7, 128.0, 172.2 pg/mL), reaching the highest value before death (Figure 1). Higher nociceptin content was measured in the tumor tissue (0.16 pg/mg) compared to the tumor-free liver tissue sample (0.01 pg/mg) taken during the autopsy. The patient refused any surgical or other systemic or local tumor treatment. The size of the tumor increased up to 12 cm in diameter and involved segments V, VII, VIII and partly IV. No metastasis was detected, but necrosis developed in the central region of the tumor. The patient received supportive treatment, analgetics, and died of tumorous cachexia 19 months after the discovery of HCC. The autopsy confirmed both PBC stage IV and HCC. Focal presence of AFP was shown in the tumor by immunohistochemistry (Figures 2A and B). 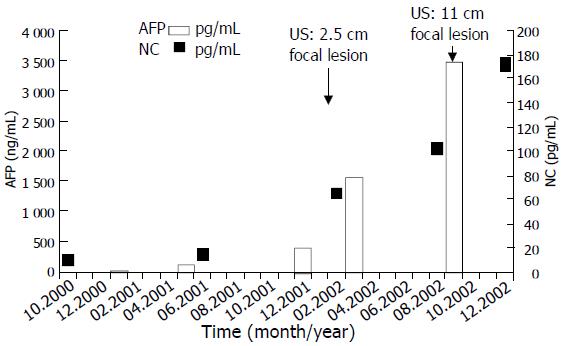 Figure 1 Serum alpha fetoprotein and plasma nociceptin lev-els before and during the development of hepatocellular carci-noma in the presented patient with primary biliary cirrhosis. 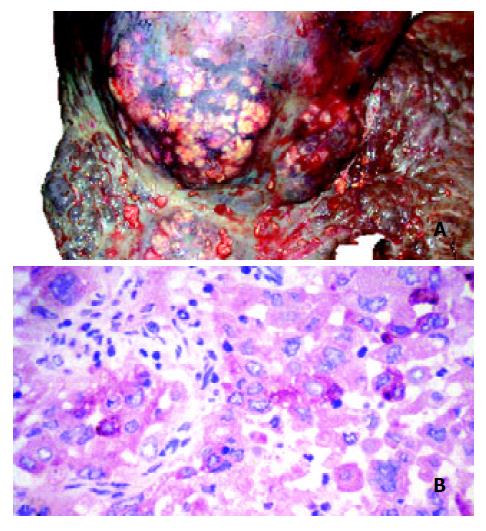 Figure 2 Hepatocellular carcinoma in the presented patient with primary biliary cirrhosis. A: Gross view of liver at autopsy. Grayish nodules of carcinoma protrude on the surface of the cirrhotic liver. Bar = 1 cm. B: The focal red staining on the histo-logic picture of the hepatocellular carcinoma shows the immu-nohistochemical reaction of AFP. Original magnification 400 ×

A nociceptin content in the HCC tissue (0.16 pg/mg) was 15-fold higher than that in the tumor free liver tissue sample (0.01 pg/mg) taken during the autopsy.

The presented case is a further example of the occurrence of HCC in PBC, and it supports previous observations that HCC usually develops in stage III/IV patients[3]. The tumor developed 18 years after the diagnosis of PBC and led to the death of the patient within two years. Furthermore, severe osteoporosis is a common disorder in PBC, although recently it is considered as a non-specific complication[10,11]. In our patient the early menopause together with PBC resulted in many bone fractures causing lifelong disability. The low serum osteocalcin level indicated a low turnover osteoporosis. High serum osteoprotegerin and low RANKL have been reported in PBC[12], and we found the same alteration in this patient. Progression of bone loss was detected despite the serum osteoprotegerin was two-fold higher than normal, which suggested that inflammatory process in the liver could also contribute to the elevation of osteoprotegerin.

This is the first follow-up case in which progressive elevation of plasma nociceptin level was detected in parallel with the elevation of AFP during tumor development, and high N/OFQ content was found in the tumor tissue.

Nociceptin is the endogenous agonist of a G-protein coupled, naloxon insensitive opioid-like 1 receptor (ORL1) recently named as OP4. Although nociceptin is structurally related to opioid peptides, especially to dynorphin A, it does not interact with μ, δ and κ receptors. N/OFQ/OP4 system is a newly discovered peptide-based signalling pathway, involved in the modulation of pain and cognition. Opioid antagonists were successfully used for the treatment of pruritus in patients with PBC[13]. These results together with the data that high plasma N/OFQ level has been reported in Wilson disease and in patients with chronic pain, led us to measure plasma nociceptin level in primary biliary cirrhosis[14]. Our motivation was reinforced by an accidental observation that we found extremely high N/OFQ in a Wilson patient with advanced HCC.

The nociceptin levels in blood samples collected in the pre-tumor stage and during the tumor development period clearly showed that the elevation of N/OFQ was parallel with that of AFP and the clinical deterioration. When the tumor was first detected the N/OFQ level was 6-fold higher than that in healthy controls (65.8 versus 9.2 ± 1.8 pg/mL, n = 29) and in other PBC patients without HCC (12.1 ± 3.2pg/mL, n = 21). When the tumor reached 11 cm the N/OFQ level was 17-fold higher than normal. Since N/OFQ content was 15-fold higher in tumor tissue than in tumor free parts of the liver, the question arose whether nociceptin was produced by HCC tissue or it accumulated in the tumor by passive binding or via increased nociceptin receptor expression.

Further research is needed to clarify the mechanism and clinical significance of the highly elevated N/OFQ level in HCC. Since N/OFQ transcripts are expressed in immune cells[15], the high N/OFQ level may also be an indicator of altered reaction of the body including immunological, cytokine and other mechanisms.

Elevated N/OFQ level might represent a compensatory mechanism in the N/OFQ/OP4 system to modulate pain perception in the central nervous system. This mechanism could explain why some patients with a very high plasma N/OFQ level did not have pain despite advanced stage of malignant liver tumor. It is remarkable that the N/OFQ was 3-fold higher in our patient than the highest values reported in patients with chronic pain without malignant disease[16].

In conclusion, the novel finding of this study is that progressive elevation of plasma nociceptin was detected in parallel with the elevation of AFP during tumor development, as well as high N/OFQ content was found in the tumor tissue in a PBC patient with hepatocellular carcinoma. This is in concordance with our previous observation that high plasma N/OFQ level might be considered as an indicator of HCC.