CONCLUSION: LOH at APC and/or MCC may occur more frequently in the early stages and plays a role in the initiation of colorectal cancer while LOH at DCC is frequent at late event and associated with the progression and metastasis of colorectal cancer.

Inactivation of tumor suppressor genes has been shown to play an important role in the development of a variety of human cancers[1,2]. The mechanisms of inactivation include allelic deletion, chromosome rearrangement, point mutation, and binding of suppressor gene products with viral or cellular inactivating proteins[1-3]. To date, several tumor suppressor genes have been discovered which include, but are not limited, the retinoblastoma susceptibility, p53, Wilm’s tumor, neurofibromatosis type I, adenomatous polyposis coli (APC), mutation in colorectal cancer (MCC), and deleted in colorectal cancer (DCC) genes. In this study, the loss of heterozygosity (LOH) at APC, MCC, and DCC genetic loci was further examined and analyzed.

Matching normal and tumor tissues were obtained at the time of surgery from 41 patients with colorectal carcinoma (11 with colonic carcinoma and 30 with rectal carcinoma). Each specimen was frozen immediately and stored at 80 oC until the analysis. A 5-μm section was cut from each tissue and stained with hematoxylin/cosin to ascertain whether the cancer cells in the tissues were predominant or not. Samples containing no cancer cells were considered normal, and those containing > 70% cancer cells were characterized as cancer-cell rich. Genomic DNA extraction was performed as previously described[4].

Polymerase chain reaction (PCR) was carried out as described previously[5]: 50 ng to 500 ng of genomic DNA were incubated at 95 oC for 5 min in 20 μL buffer containing 10 mmol/L Tris HCl, 50 mmol/L KCl, 1.5 mmol/L MgCl2, 25 pmol/L of each primer, 200 μmol/L concentration of each deoxynucleotide triphosphate, and 2 units of Taq DNA polymerase. Multiple primer sets were used for each loci (Table 1). The priming regions were located within specific tumor suppressor genes of a polymorphic sequence[6]. Either a restriction fragment length polymorphism analysis technique (RFLP)[7] or a variable number of tandem repeats type polymorphism[8] was utilized. PCR was performed under the conditions described by Boynton et al[4] with a thermal cycler (Perkin Elmer Cetus, TOWN, COUNTRY). Annealing temperature, extension time and the number of amplification cycles were optimized for each primer set. PCR products were either digested with appropriate restriction enzymes (for RFLPs) or left intact (for a variable number of tandem repeats) and electrophoresed on either a 3% agarose gels or 8% polyacrylamide gel which were stained with ethidium bromide and photographed under UV light.

LOH was defined as a visible change in allele: allele ratio in DNA relative to the ratio in corresponding normal DNA. 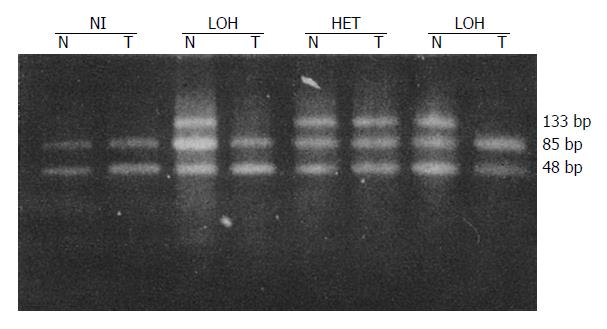 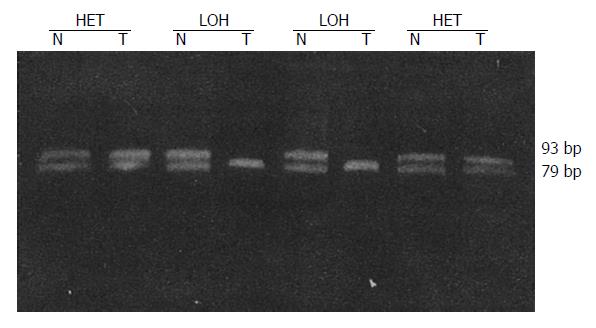 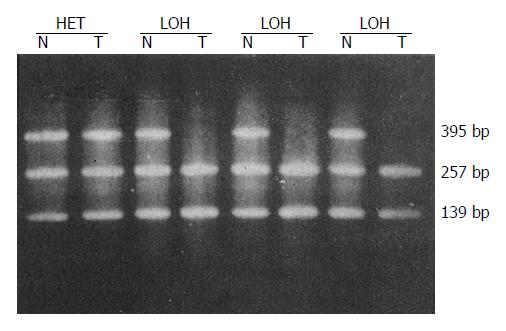 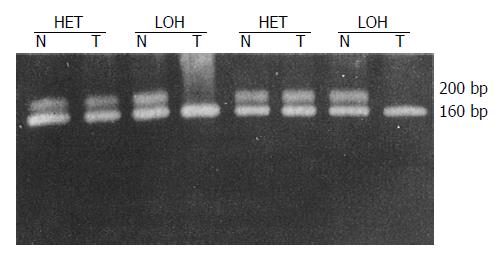 Genetic alterations such as ras mutation, 5q, 18q, and 17p deletions are believed to contribute to multistage carcinogenesis through colorectal adenoma to carcinoma[12]. LOH on 5q was observed most frequently in the intramucosal carcinoma[10,13]. With respect to the LOH on 18q, the frequency was very low in moderate and severe adenomas and intramucosal carcinomas, but it was high in invasive carcinomas[14]. In the present study, we did not find any correlation between LOH at APC and/or MCC and tumor histological type, size, serosal invasion, lymph node metastasis or the Dukes’ stages. However, the LOH rates at DCC locus in groups with lymph node metastasis and the Dukes’ stages III and IV were significantly higher than in groups without lymph node metastasis and the Dukes’ stages I and II. These data suggest that LOH at APC and/or MCC may occur more frequently in the early stages and play a role in the initiation of colorectal cancer. LOH at DCC is frequently a late event and is associated with the progression and metastasis of colorectal carcinoma.

Unexpectedly, there was no significant correlation between LOH of APC and MCC, even though these are closely linked loci on chromosome 5q. This finding suggests that LOH of APC occurs independently of LOH involving MCC. Similar discrepancies between these two genes have been previously reported in lung cancer[15] and esophageal cancer[4], as well as in colorectal cancer[16].

Some tumors did not lose heterozygosity at any of the tumor suppressor gene loci examined. One explanation is that these genes may be altered by another mechanism, such as point mutation, gene rearrangement, or microdeletion. Point mutations in APC, MCC, and DCC have been found in tumors without LOH[16]. Another explanation is that LOH at chromosomal regions, such as chromosomal 17q, is also important in pathogenesis. Furthermore, current assays may have limited sensitivity due to normal cell contamination of the specimens and/or lack of informativity at the RFLPs tested. And lastly, a subset of colorectal tumors may arise through the inactivation of other, as yet unknown, tumor suppressor genes and/or in combination with other genetic and epigenetic events. Further studies are required to explore these possibilities.