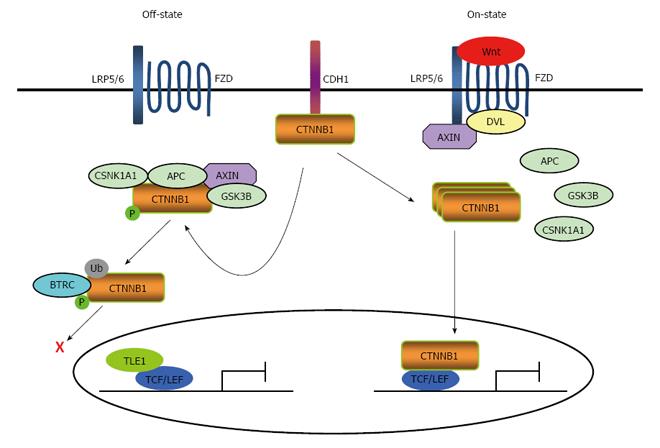 Figure 1 Canonical wingless/int-1signaling pathway. Three complexes are involved in the dynamic activating event: (1) the cell-surface receptor complex; (2) the destruction complex in the cytoplasm; and (3) the CTNNB1/TCF/LEF transcriptional complex in the nucleus. In a normal steady state, there are two pools for CTNNB1 in cells. One is known to interact with CDH1 at the cell-cell junction. The second is present in the destruction complex in cytoplasm, which is assembled by the scaffold proteins AXIN, APC, GSK3β, and CSNK1A1. CSNK1A1 and GSK3β phosphorylate CTNNB1 in the AXIN complex. Phosphorylated CTNNB1 is subsequently recognized and ubiquitinated by BTRC. In the absence of nuclear CTNNB1 translocated from the cytoplasm, TCF/LEF proteins bind to DNA and act as transcriptional repressors by binding to TLE1 proteins. These in turn interact with histone deacetylases whose activities lead to the transcriptional silence of chromatin. The binding of Wnts to FZDs, which form the cell-surface receptor complex, promotes the binding of scaffold proteins such as DVL to the FZD intracellular domains. This subsequently induces the aggregation and phosphorylation of LRP6 and the translocation of AXIN. Phosphorylated LRP6 also recruits AXIN to LRP6 on the plasma membrane. This allows AXIN to be inactivated, which then inhibits CTNNB1 phosphorylation. This in turn allows CTNNB1 to escape degradation, accumulate in the cytoplasm, and translocate to the nucleus. In the nucleus, CTNNB1 interacts primarily with members of the TCF/LEF family of transcription factors and triggers the activation of multiple intracellular signaling cascades. This results in the regulation of various cellular functions. CTNNB1: Catenin beta 1; TCF/LEF: T-cell-specific transcription factor/lymphoid enhancer binding factor; CDH1: Cell adhesion molecule cadherin 1; APC: Adenomatous polyposis coli; GSK3β: GSK3B, glycogen synthase kinase 3 beta; CSNK1A1: Casein kinase 1 alpha 1; FZD: Frizzled class receptor; BTRC: Beta-transducin repeat containing E3 ubiquitin protein ligase. 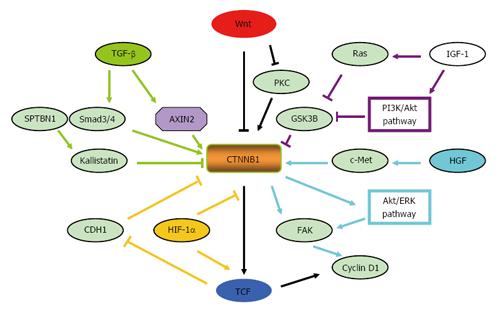