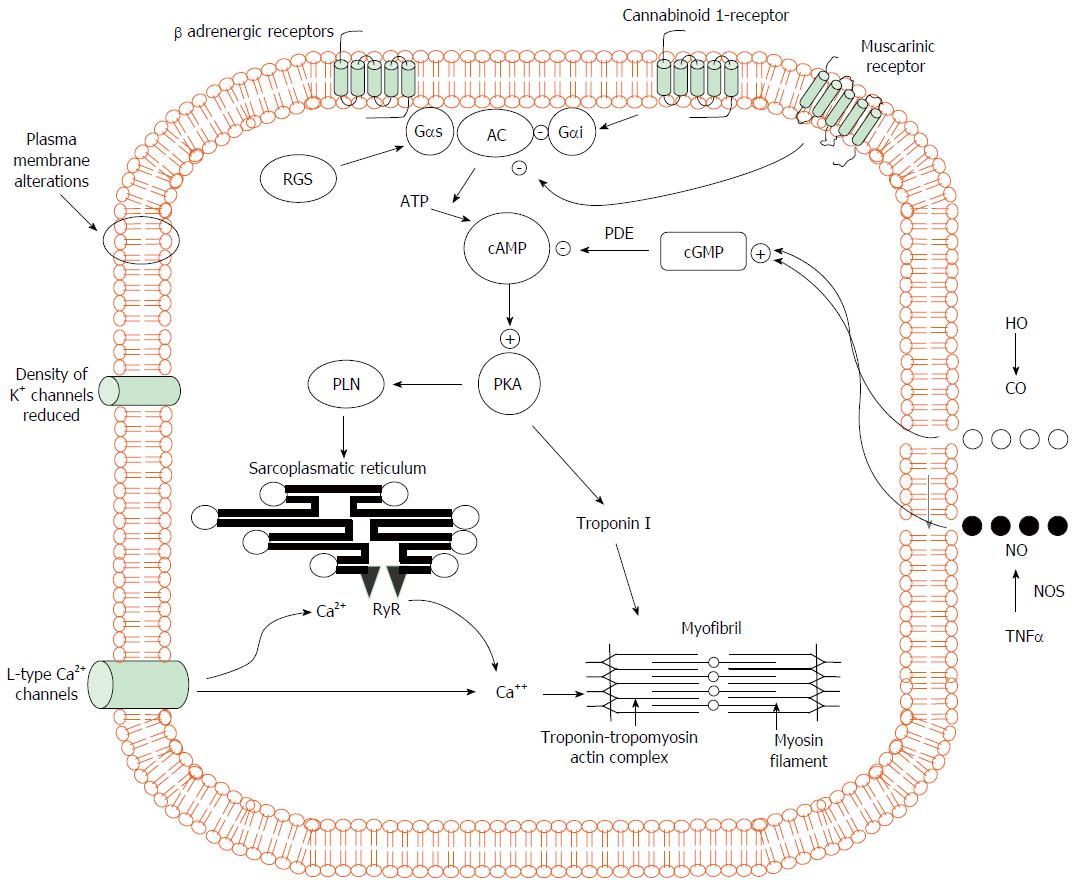 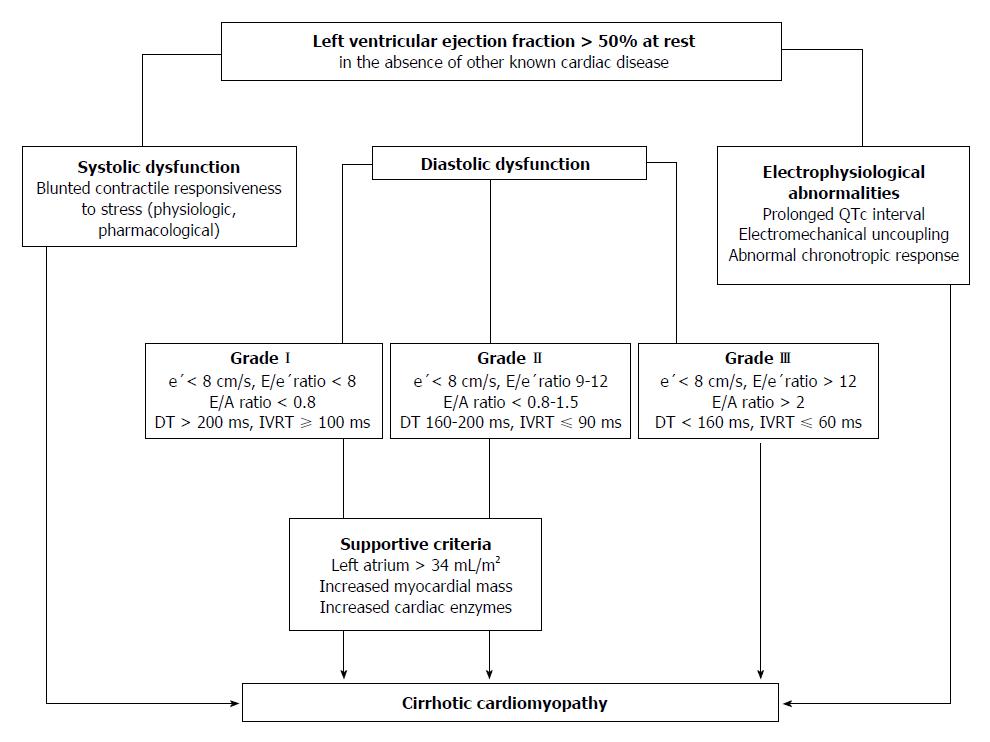 Figure 3 Algorithm for the diagnosis of cirrhotic cardiomyopathy. Three ways to diagnose CCM with normal EF at rest have been displayed: (1) Systolic function. Patients have documented blunted responsiveness to volume and postural challenge, exercise, or pharmacological infusion but the manoeuvres that can bring systolic dysfunction have not been standardized yet; (2) Diastolic function. The diagnosis of LVDD can be obtained by TDI (E/e′ > 15). If TDI yields an E/e′ ratio (8 < E/e′ < 15) other echocardiographic investigations such as blood flow Doppler of mitral valve or pulmonary veins, LV mass index or left atrial volume index are required for diagnostic of LVDD; (3) Electrophysiological abnormalities. a, the prolongation of the electrocardiographic corrected QT interval is common in cirrhosis; b, electromechanical uncoupling is a dyssynchrony between electrical and mechanical systole. The electrical systole is longer in patients with cirrhosis; c, chronotropic incompetence is the inability of the heart to proportionally increase HR in response to stimuli (exercise, tilting, paracentesis, infections and pharmacological agents). CCM: Cirrhotic cardiomyopathy; EF: Ejection fraction; LVDD: Left ventricular diastolic dysfunction; TDI: Tissue Doppler imaging; e’: Peak early diastolic velocity at the basal part of the septal and lateral corner of the mitral annulus; E/e’ratio: Peak E-wave transmitral/early diastolic mitral annular velocity; E/A ratio: Early diastolic mitral inflow velocity/late diastolic velocity; DT: Deceleration time; IVRT: Isovolumic relaxation time. 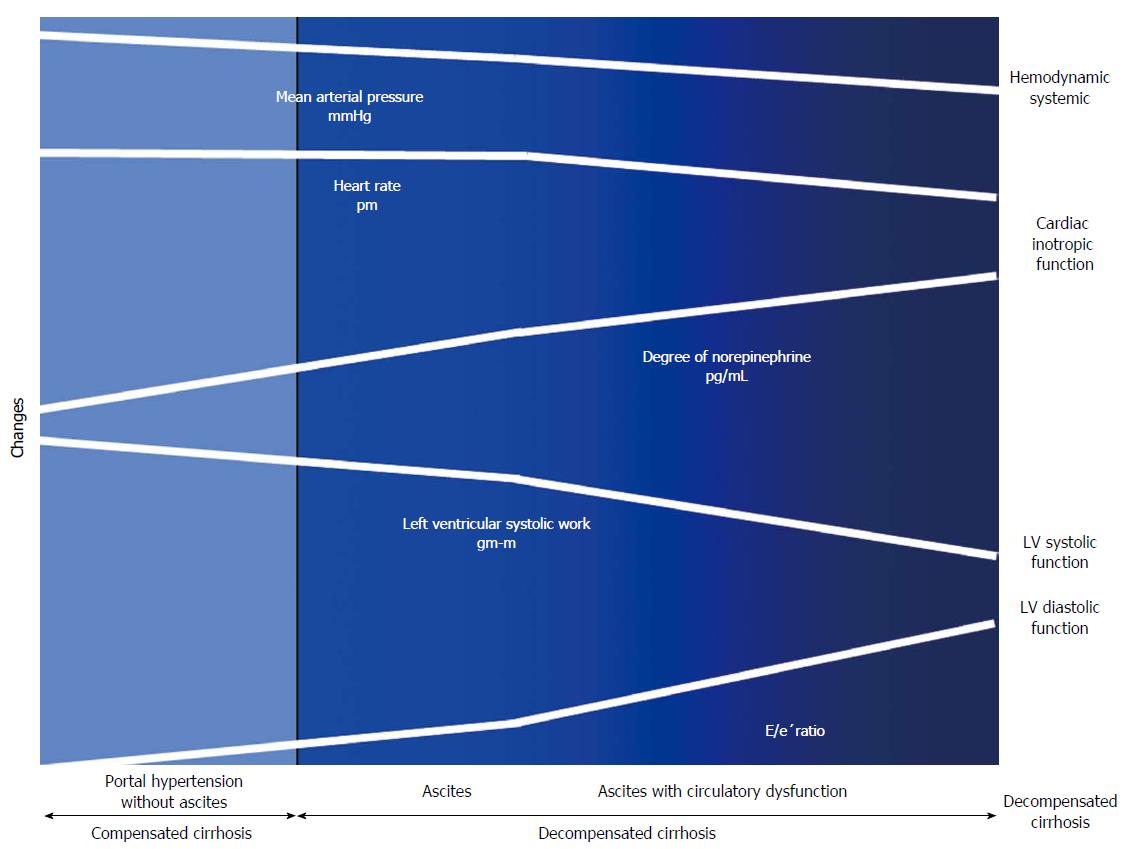 Figure 4 Cardiac and circulatory dysfunction according to presence of compensated and decompensated cirrhosis. There is a progressive splanchnic arterial vasodilatation due to the overproduction of vasodilator molecules. Initially, circulatory homeostasis is maintained by the development of a hyperdynamic circulation. Later during the course of decompensated cirrhosis, patients develop an activation of the vasoconstrictor systems to maintain arterial pressure. In subsequent stages, the progressive decrease in cardiac afterload is not followed by an increase in HR and CO due to a decrease in cardiac function. Finally, in the advanced phase, when impairment of effective arterial blood volume is extreme, patients showed increased activity of NE concentration, arterial hypotension and reduced LVSF (CO and LV stroke work), and cardiac chronotropic function, and a higher degree in LVDD (E/e’) as compared to those with ascites, but normal NE, or without ascites. E/e’ratio: Peak E-wave transmitral/Peak early diastolic mitral annular velocity.