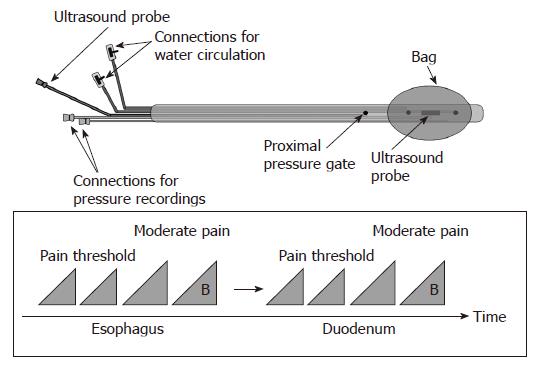 Figure 1 The probe design allows bag distension of the esophagus and duodenum together with cross-sectional ultrasound imaging and recording of the bag and proximal pressures (top). The distension protocol is shown at the bottom. The first distensions to the pain threshold were preconditioning stimuli also used for learning. They were followed by a distension (15 mL/min in the esophagus and 25 mL/min in the duodenum) to the perception of moderate pain. Finally, a bolus of 20 mg of butylscopolamine (B) was given intravenously in order to diminish distension-evoked smooth muscle contractions and a final distension to the perception of moderate pain was done. 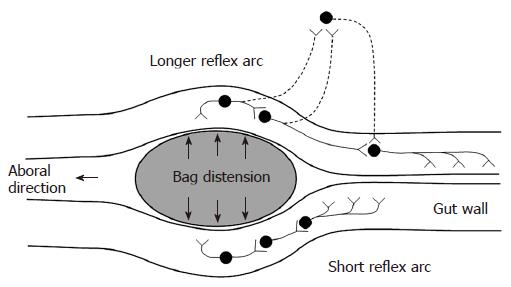 Figure 2 Schematic illustration of the neural pathways involved in distension-induced contraction. The primary afferent neurons, the excitatory interneurons and efferent neurons are shown. The dotted neurons illustrate extrinsic pathways. The induction of contraction on the bag depends on the local reflex arc (bottom). The measurement 6 cm proximal to the bag depends on a longer reflex arc including extrinsic pathways (top). 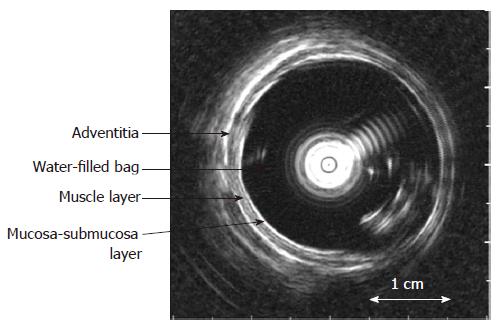 Figure 3 The cross-sectional ultrasound image of the distended distal esophagus allows identification of the esophageal layers, i. e. mucosa-submucosa, muscle and adventitia layers. The white round shadow in the centre is caused by the intraluminal ultrasound probe. 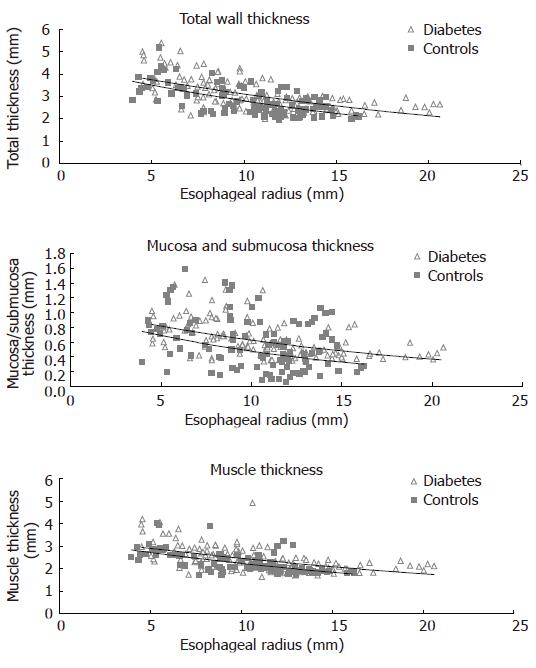 Figure 4 The distension-induced change in thicknesses of the total esophageal wall structure, the muscle layer, and mucosa-submucosa layer during smooth muscle relaxation with butylscopolamine are illustrated as function of the esophageal radius. The data points represent the multiple measuring points during each distension of the patients and controls. Exponential trend lines (solid lines) of the patients and controls are shown. The total wall thickness and the mucosa-submucosa layer were increased in the diabetic patients. 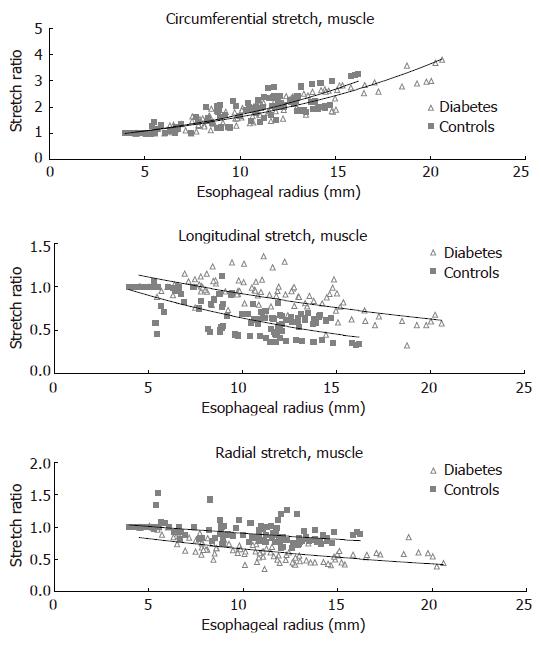 Figure 5 The distension-induced change in circumferential, longitudinal and radial stretch ratios are illustrated as function of the esophageal radius. The curves were obtained during smooth muscle relaxation with butylscopolamine. The data points represent the multiple measuring points during each distension of the patients and controls. Exponential trend lines (solid lines) of the patients and controls are shown. The shortening during distension was clearly reduced in the diabetic patients while the radial stretch was decreased.

Figure 6 The computed esophageal stiffness (circumferential [alpha] constant) of the mucosa, submucosa-muscle interface and outer surface are illustrated. The solid grey bars represent the controls, while the grey-white bars represent the diabetic patients. The stiffness tends to be higher in the diabetic patients and is normalized during smooth muscle relaxation with butylscopolamine. This indicates an increased esophageal resting tone in diabetes. The computed duodenal stiffness is also illustrated. Mean and SEM values are shown.