Intrathyroidal ectopic thymus (IET) is defined as an ectopic thymus tissue that is generally found incidentally and rarely in the thyroid gland in the pediatric group. It occurs as a result of disruption of the embryological migration path and the settling of the thymus tissue into the thyroid gland. In the differential diagnosis, it is mostly confused with thyroid nodules. Although thyroid nodules are less common in children than adults, the rate of malignancy is much higher. Therefore, knowing the general ultrasound findings of IET better may prevent unnecessary invasive attempts and surgical procedures. In this article, we tried to compile the key imaging findings of IET.

Core Tip: The unique ultrasonographic features of intrathyroidal ectopic thymus (IET) can be remembered as; well-circumscribed, hypoechoic eco pattern with linear or punctate echogenic foci resembling thymus, fusiform or oval shape, diameters smaller than 1 cm, location of middle and/or lower 1/3 part of thyroid gland, hypovascularity or avascularity and the same strain ratio values with the surrounding thyroid gland on elastography. Although some studies suggested cytopathological examination for the accurate diagnosis of a suspected IET case, majority of the previous studies stated that IET can be followed without the presence of any atypical findings. So that, unnecessary surgical or interventional procedures can be avoided.

Thyroid lesions in children are mostly in the benign category, but malignant lesions can also be encountered, even rarely. Intrathyroidal ectopic thymus (IET) is a benign lesion that can be encountered in children and does not require treatment. Although it has typical sonographic aspects, it may be misdiagnosed as a thyroid nodule by radiologists who do not have sufficient experience. As a result, a process leading to interventional procedures or even surgery may occur. However, some of its features conflict with thyroid nodules. In these cases, a cytopathological evaluation must be made for the distinction. If IET common ultrasound (US) features are familiarized it can be distinguished from malignant pathologies of the thyroid.

Thymus tissue develops in the intrauterine 6th week from the 3rd and 4th branchial saccule. Bilaterally developing primordial thymus tissues descend to the anterior mediastinum in the 8th week and combine to form the bilobuled thymus tissue at the 9th week. This descent is from the mandibular angle level to the anterior mediastinum caudally and medially. During migration, the thymic remnant can replace ectopically anywhere along the descent line in the cervical region. Although some articles report that the most ectopic cervical location is intrathyroidal[1], some articles also report it is less common than other ectopic locations in the cervical region[2]. The reason for intrathyroidal localization is thought to be due to the thyroid diverticulum being close to the 3rd branchial sac, although the thyroid tissue basically develops from the 1st and 2nd branchial sac[3].

IET was first described as pathologically by Gilmour in 1937[4]. It does not present with any clinical or physical examination findings in children and is often detected incidentally. Although it is a benign condition, cases showing malignant transformation have been reported in the literature[5]. Its prevalence has been reported between 0.99% and 5.9% in studies[1,4-6]. The mean age of onset varies between 1-10 years in studies[3,5,7,8]. Although not statistically significant, it has been reported slightly more frequently in men[1,3,8].

IET consists of 2 types as abutting and enclosed types, and abutting type is more common than the other. When abutting type is seen, it should be taken into consideration that ectopic thymus tissue may be extending from the anterior mediastinum to the thyroid gland and should be examined carefully[9].

The first diagnostic modality should be US to evaluate the IET and other thyroid lesions[5]. In US, it is observed as a well-circumscribed, hypoechoic lesion containing linear or punctate echogenic foci resembling thymus[1,3,5,7,8,10]. Its contours may be irregular in some cases[8].

Internal punctate echogenicities indicate the Hassall's Corpuscle and their typical histopathological appearance confirms the diagnosis of thymus tissue[10]. Also, because of the similarity of the echo structure and presence of internal echogenic foci, IET can resemble the thymus tissue in the anterior mediastinum[10,11] (Figure 1). When the shape characteristics are examined, IET mostly presents as fusiform or oval[1,3,5,9]. In studies, its dimensions were found to be smaller than 1 cm[3,8,11]. When the location in the thyroid gland is evaluated, it is mostly observed in the middle and lower 1/3 part and more commonly in the posterior parts[1-3,11]. The reason is thought to be that the thymus develops under the pharyngeal sac, where the thyroid develops during embryological development[1]. Only 2 IETs were observed in the upper pole in the study of Erol et al[2]. 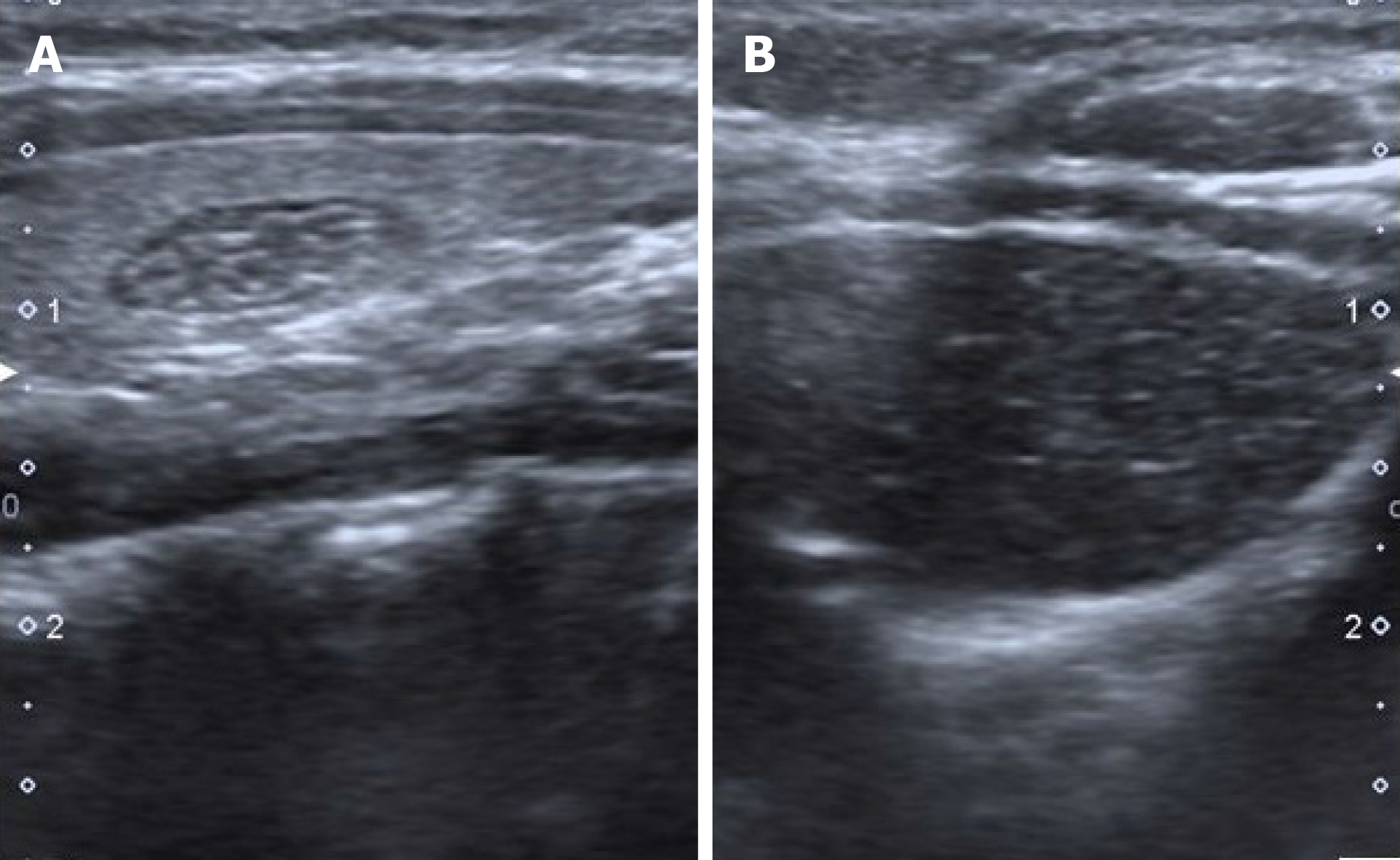 In color Doppler examination, IET is hypovascular or avascular compared to surrounding thyroid tissue[1,3,10,11] (Figure 2). Only a few cases have been reported to be isovascular[1,3,11]. Erol et al[2] stated that the observation of a vascular structure that passes through the nodule without any compression is a useful hint to differentiate IET and the other nodules.

Elastography was used in two studies, showing that IET had the same stiffness as the surrounding thyroid tissue and the average strain ratio (SR) was defined as 0.99[5,8].

In US follow-up, the dimensions of IET either remain stable or show regression[2,3,12]. Additionally, hormones and enzymes associated with the thyroid gland were also evaluated, and no significant relationship was found with IET[3,5].

In the presence of typical findings of IET described above, absence of palpable thyroid nodule and cervical lymphadenopathy, no prior risk to increased risk of malignancy (radiation exposure to the neck, family history), follow-up will be enough for the management of IET cases[1,2,5,9,10,12]. In the study of Januś et al[5], it was underlined that US features of IET can be similar to papillary thyroid cancer (especially diffuse sclerosing variant]. In these cases it can be challenging to differentiate the two entities, and elastography can be helpful[5,8]. Exceptionally, Stasiak et al[8] emphasized that cytopathological examination should be performed in cases with suspected IET and the diagnosis could only be reliable in this way[8].

IET is generally confused with thyroid nodules (Figure 3). In pediatric patients, the incidence of thyroid nodules is between 0.2%-1.5%, much less common than adults, but the rate of malignancy is higher[9]. In addition, bilateral lesions in children do not reduce the suspicion of malignancy because thyroid cancer is more common in children when it is multifocal and bilateral[8]. Therefore, further examinations should be made and the distinction between benign and malignant nodules should be revealed. If the ultrasound findings are insufficient for differentiation and the suspicion continues, fine needle aspiration biopsy should be performed first. There are some cases diagnosed by hemi lobectomy in the literature. Although IET is a benign process, it should be known that it may undergo malignant transformation such as thymoma, thymic carcinoma and lymphoblastic lymphoma[5,8]. There are some findings that support the malignant nature of a hypoechoic nodule echo pattern, solid component, ill-defined contour, irregular or round shape, microcalcification, increased vascularity, and pathological lymph node presence[8,9]. 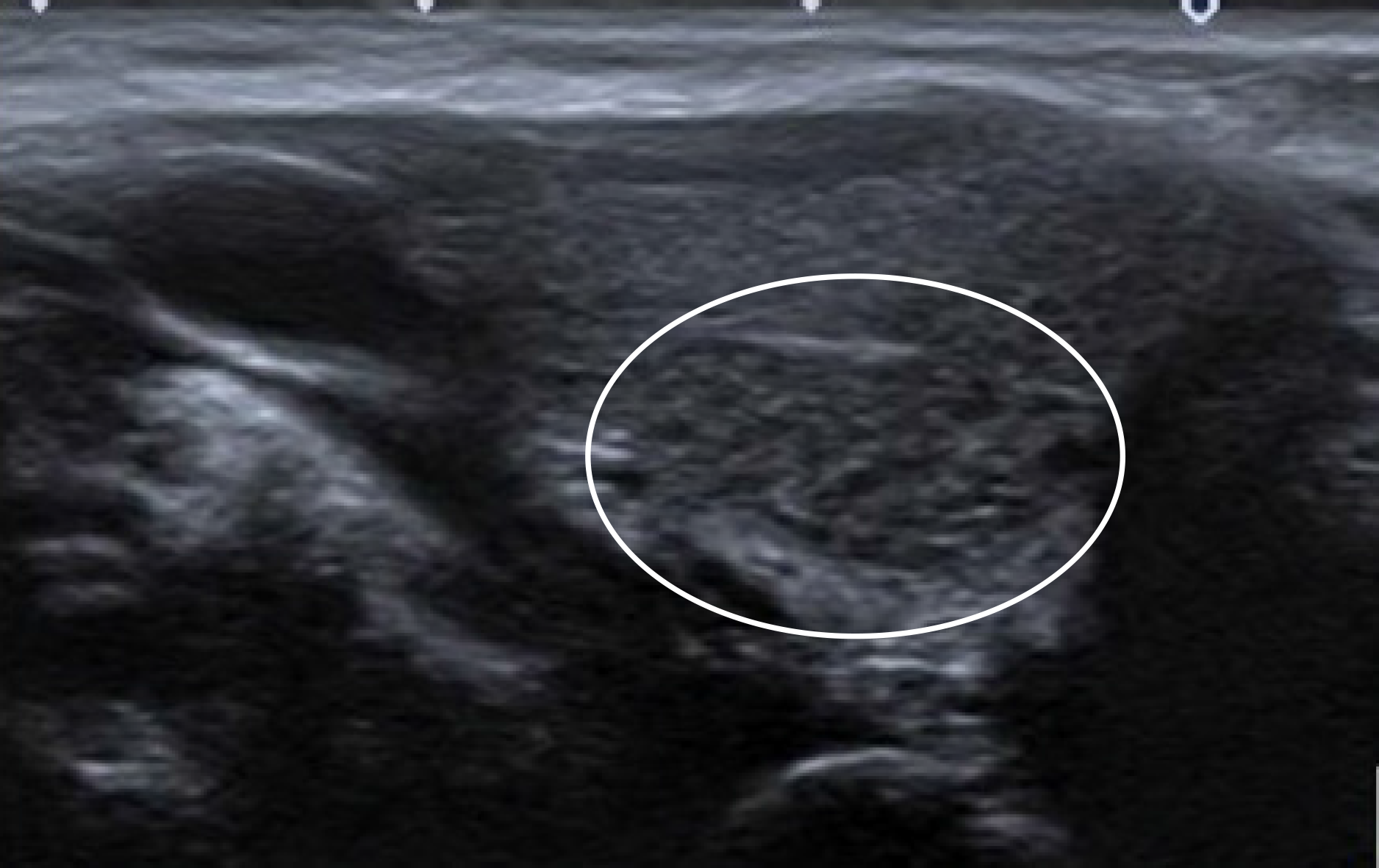 Figure 4 Ten-year-old male with recurrent cough. Longitudinal sonographic images obtained with 7 MHz linear transducer. Abutting type intrathyroidal ectopic thymus. The lesion is located at the lower half of the gland, it has unclear margins. This appearance can be confused with focal thyroiditis.

Intrathyroidal parathyroid gland is similar to IET, but it is differentiated by the absence of echogenic punctate foci. Clinical symptoms and laboratory findings are also useful in differential diagnosis[5].

Intrathyroidal esophageal diverticulum should be considered in differential diagnosis. Its echo pattern is isoechoic or hypoechoic compared to the surrounding thyroid tissue. Internal and peripheral echogenic focuses can be seen. In the differentiation, showing the relationship with the esophagus, changing shape with swallowing and a comet tail artifact due to the inside air can be helpful[1].

Hashimoto thyroiditis nodular form has a solid, hypoechoic echo structure and echogenic punctate focus that can also be observed. It can be well-circumscribed or ill-defined. Laboratory findings may be normal in this type of Hashimoto thyroiditis. Therefore, cytopathological correlation is required[1].

Artificial intelligence (AI) has been playing an increasing role in the diagnosis of thyroidal disease[13], however as far as we know there is not a study concentrating on the use of AI in detecting IET in the English literature.

The unique ultrasonographic features of IET can be remembered as well-circumscribed, hypoechoic eco pattern with linear or punctate echogenic foci resembling thymus, fusiform or oval shape, diameters smaller than 1 cm, location of middle and/or lower 1/3 part of thyroid gland, hypovascularity or avascularity and the same SR values with the surrounding thyroid gland on elastography. Although some studies suggested cytopathological examination for the accurate diagnosis of a suspected IET case, most stated that IET can be followed since there is absence of atypical findings. Therefore, unnecessary surgical or interventional procedures can be avoided.