Article-Type of This Article
Systematic Review

To identify the most effective approach for pancreatic cancer using network meta-analysis.

Pancreatic cancer is one of the most common and lethal malignancies[1]. Surgical resection is the only potential curative treatment for pancreatic cancer. However, even after radical removal of the tumor (R0), the prognosis remained poor, with the 5-year survival rate being less than 25% and the median survival time being 14-21 mo[2-4]. High incidence of both locoregional and distant recurrences is responsible for the poor prognosis. Thus, a multimodal approach is needed to decrease the high recur-rence rate as well as increase overall survival[5,6].

The aim of this network meta-analysis was to identify the most effective treatment for resectable pancreatic cancer by comparing overall survival and toxic effects after neoadjuvant or adjuvant CT and CRT.

Eligible studies were searched from PubMed, Medline, EMBASE, Cochrane database, and Google scholar, using a combination of following terms “pancreatic cancer”, “pancreatic neoplasm”, “neoadjuvant therapy”, and “adjuvant therapy”. A manual search through published articles was performed additionally. No publication year was restricted in the search. The search was carried out independently by two au-thors.

The following inclusion criteria were used: (a) Randomized controlled trials; (b) Studies investigating surgery alone, neoadjuvant therapies, or adjuvant therapies for resectable pancreatic cancer; and (c) Studies that had at least one of the following outcomes: Survival and toxicity. Single-arm studies, nonrandomized cohort studies, and studies comparing different ways of adjuvant or neoadjuvant treatment were not included in this network meta-analysis.

The information on study design, methods, patient characteristics, treatment protocols, and outcome (overall survival and toxicity) was extracted independently by two authors. We extracted reported adjusted hazard ratios (HRs) to measure overall survival. When HRs were not reported, we estimated them from summary statistics (Kaplan-Meier curves) in accordance with practical methods for incorporating summary time-to-event data into meta-analysis[17]. If there was no enough information to estimate HRs, median survival durations would be used in this network meta-analysis[18]. Only grade 3 or 4 toxicities (overall toxicities and haematological toxicities) were extracted and analyzed in this network meta-analysis. The quality of ran-domized control study was assessed by the Cochrane Collaboration’s tool[19]. Data collection and study quality assessment were performed following the Quality of Reporting of Meta-Analyses statement.

The study outcomes were overall survival and toxicity after neoadjuvant or adjuvant therapies. For network meta-analysis of overall survival, the preferred outcome measure was reported HRs, followed by estimated HRs and median survival du-rations. Relative treatment effects (HRs) in multi-arm trials were converted to arm-specific outcomes[18]. For network meta-analysis of toxicity (overall toxicity and haematological toxicities), we used odds ratios (ORs) as outcome measures. ORs were calculated from the summary number of reported toxicity events and summary number of exposure patients in each trial. Since the definition and reporting type of toxicity were diverse in the included studies, we only summarize seven toxicity events [nausea/vomiting, infection/fever, asthenia/fatigue, diarrhea, hematological toxicity (leukopenia, thrombopenia, and anemia)] as overall toxicity.

For indirect comparisons, we conducted random-effects Bayesian network meta-analysis using Markov chain Monte Carlo methods in The R Programming Language 3.3.2 [R Core Team (2016), R Foundation for Statistical Computing, Vienna, Austria]. Network meta-analysis assumes “consistency” of treatment effects across all included randomized trials, that is, the direct and indirect estimates are the same effects. Network consistency was evaluated by comparing the direct estimates to the indirect estimates using the node splitting model. We used non-informative uniform and normal prior distributions in network meta-analysis. And we used a thinning interval of 500 for each chain and yielded 5000 iterations to obtain the posterior distributions of model parameters. Convergence of iterations was assessed using Gelman-Rubin-Brooks statistic. Trace plot and density plot were used to assess the convergence of the model. The summary effect of each comparison will be presented as point estimate (HR) and the corresponding 95% confidence interval (CI). The probability of each arm achieving the best rank among all the options was calculated and is presented as rankogram. The efficacy of different treatments was ranked using rankogram.

We identified 350 potentially relevant articles without duplicates from database searches and manual searches. After initial screening of these records, we excluded 252 articles because they investigated neither neoadjuvant nor adjuvant therapy of pancreatic cancer. We detailedly assessed the remaining 98 articles by abstracts and excluded 68 not reporting randomized control studies. After assessing full texts of the potential eligible 30 articles, we included 14 articles[8,20-32] (13 trials) in the network meta-analysis (Figure 1). If a single trial was reported in different publications, we combined the data of the different publications. And if a single outcome in a same trial was reported in different publications, the result of the latest publication would be used. The ESPAC-1 trial[29] included three subgroups, as the subgroup with two-by-two factorial design was updated in the following report[28]; this subgroup comparison was recognized as ESPAC-plus trial[28] and the last two subgroups as ESPAC-1 trial[29] in this meta-analysis. Also, we included data from ESPAC-3-v1[25] which was not included in the ESPAC-1 trial to avoid duplication. 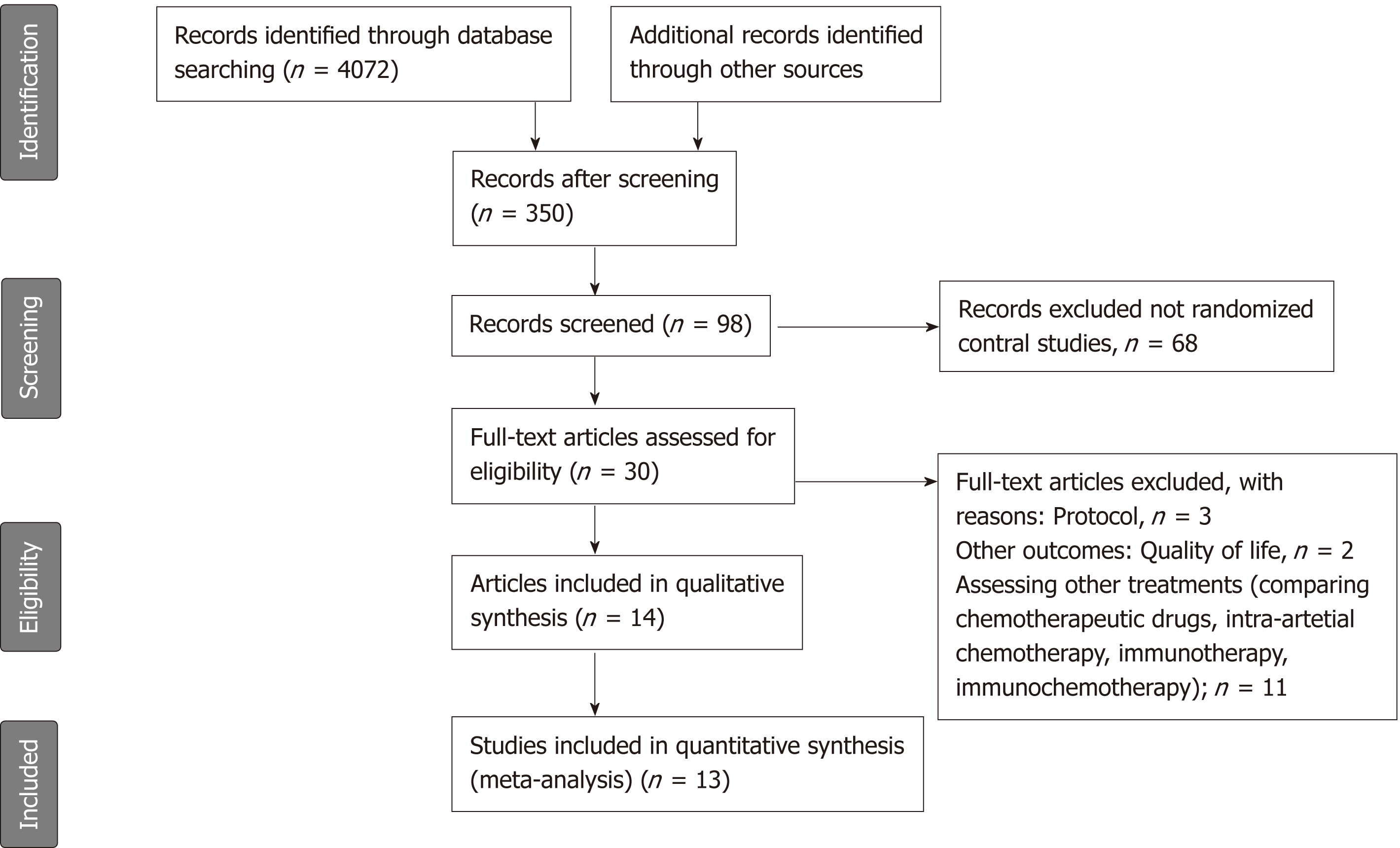 The methodological quality of the included 13 trials was high (Supplemental Table 1). Four trials did not report sequence and six trials did not report allocation concealment. Although blinding was not reported in any trial, the primary outcome (overall survival) would not be affected by blinding or not, and a low risk of bias was recognized. Finally, we included 13 high quality trials with 1591 participants in this network meta-analysis (Figure 2). A total of 1591 participants were randomized to receive either neoadjuvant CRT with surgery (n = 51), surgery alone (n = 703), surgery with adjuvant CT (n = 665), or surgery with adjuvant CRT (n = 172). 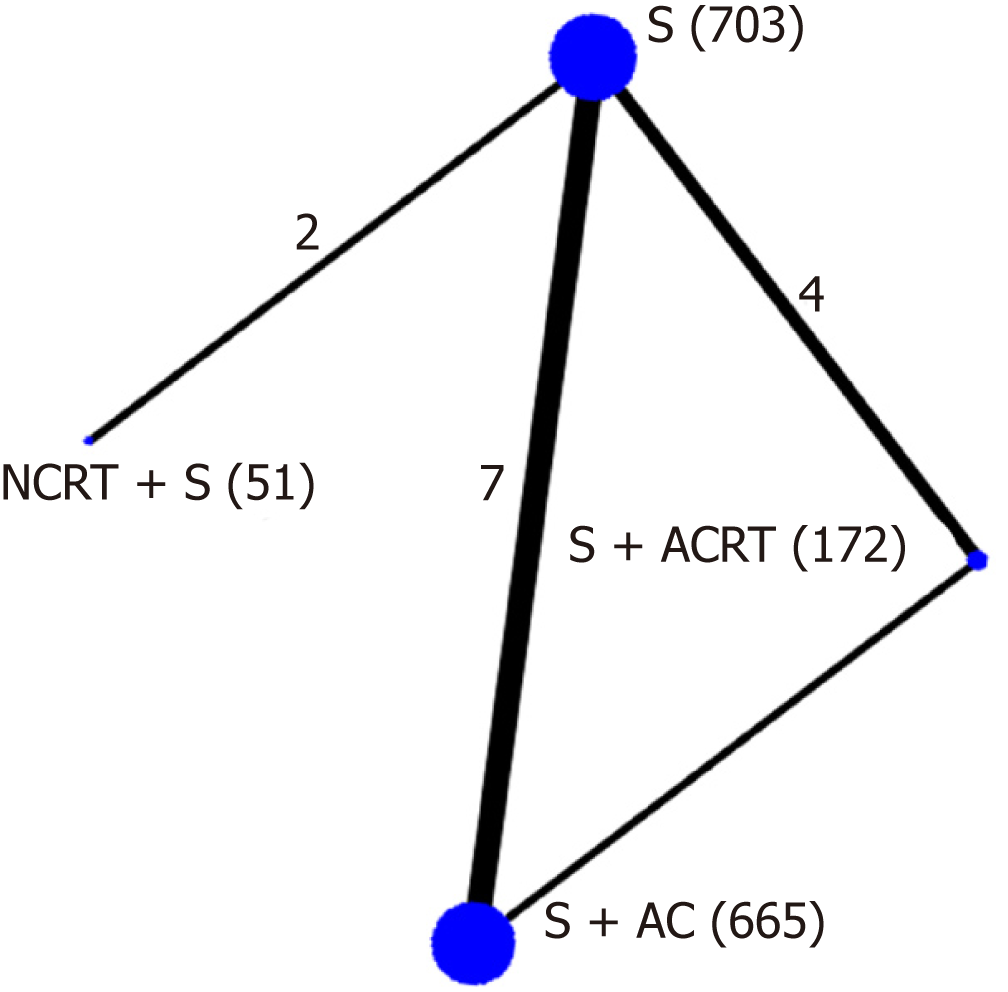 The characteristics of the 13 included trials are summarized in Table 1 and Supplemental Table 2. All of the included trials were two-arm studies except the ESPAC-1 plus trial[28], which was a four-arm trial using a two-by-two factorial design. The recruitment period ranged from 3 to 8 years. Both pancreatic adenocarcinoma and invasive ductal pancreatic cancer were included in this meta-analysis. For trials including periampullary carcinoma, the data about periampullary cancer were excluded[8]. The median age ranged from 57 to 71.5 years old. Most (> 90%) of included participants had primary tumor stage T1-T3, and most of them had nodal status N0-N1. The schedule of CT or CRT can be recognized briefly in Table 1. 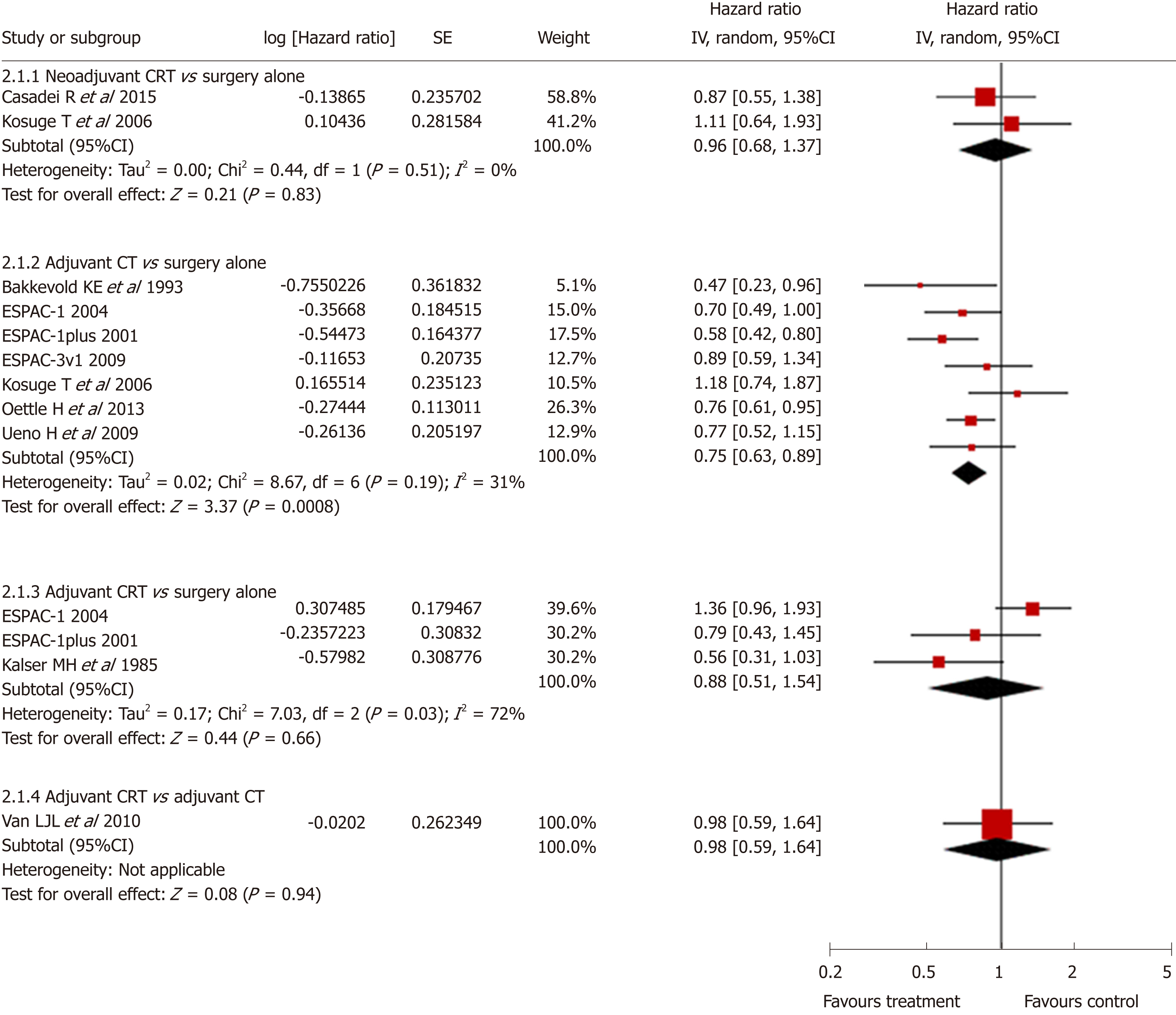 Figure 3 Forest plot of direct comparison meta-analysis of overall survival. Squares and horizontal lines correspond to the study-specific HRs and 95% CIs, respectively. The area of the squares correlates with the weight of each enrolled study, and the diamonds represent the summary HRs and 95% CIs. HRs: Hazard ratios; CI: Confidence interval.
Network meta-analysis of overall survival 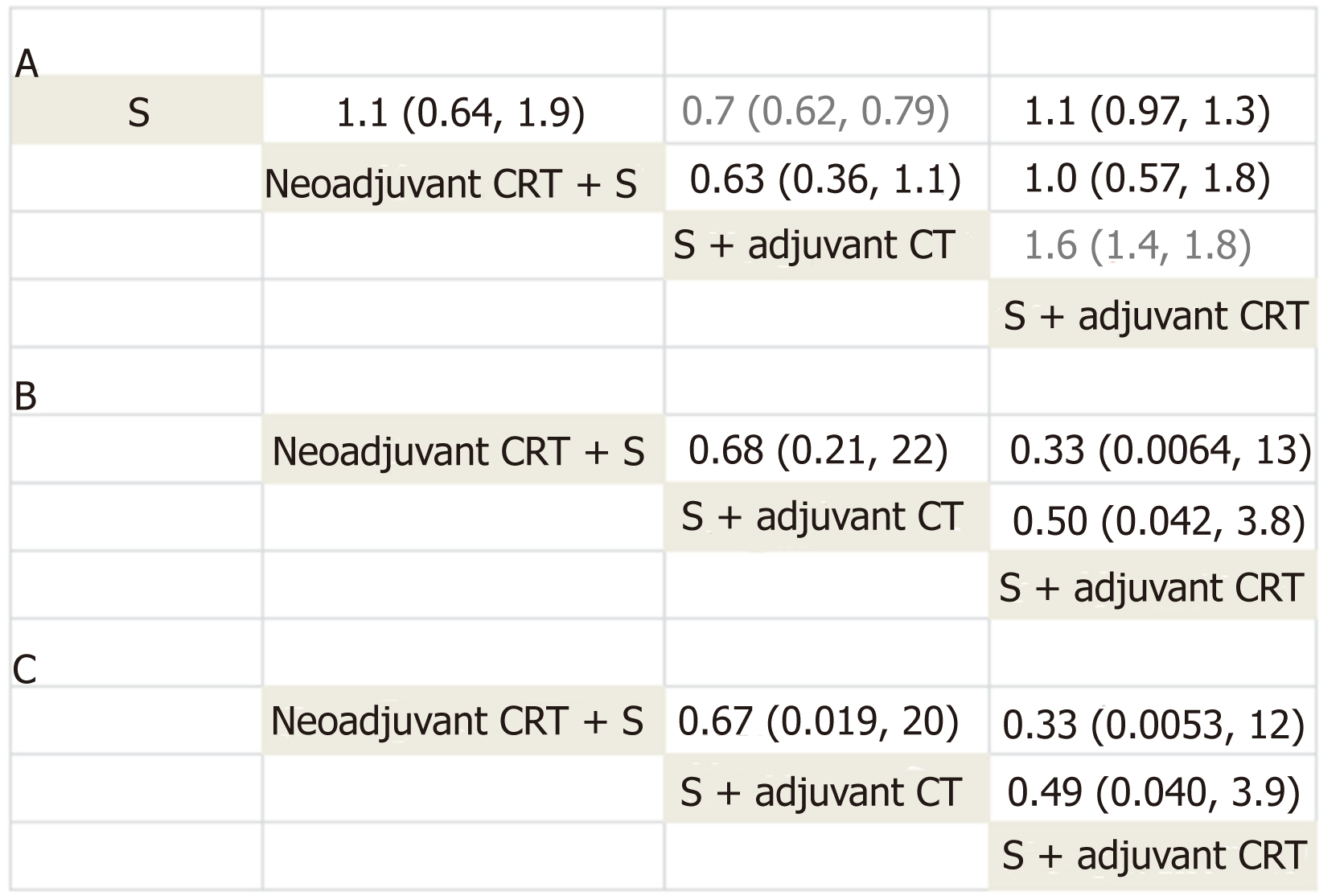 Data on toxicity were available in seven trials. We summarize all the reported toxicity events [nausea/vomiting, infection/Fever, asthenia/Fatigue, diarrhea, and he-matological toxicity (leukopenia, thrombopenia, and anemia)] in Supplemental Table 3. Neoadjuvant or adjuvant CT and CRT were well tolerated, and grade 3 or 4 toxicities occurred infrequently. We summarize the result of network meta-analysis on overall toxicity and haematological toxicity in Figure 4. Density plot, trace plot, and Brooks-Gelman-Rubin diagnosis plot showed satisfied convergence of network plot model (Supplemental Figure 2). No significant differences in overall toxicity or haematological toxicity were found between all the comparisons (neoadjuvant CRT with surgery, surgery with adjuvant CRT, and surgery with adjuvant CT) (Figure 4).

In our network meta-analysis, high quality evidence confirmed the survival advantage of adjuvant CT over surgery alone. Although overall survival associated with adjuvant CT had been evaluated in several head-to-head comparisons[22,24,25,27,31], the absence of statistical significance led to equivocal conclusions[24,31]. Previous meta-analysis also demonstrated a survival difference when comparing surgery alone and surgery with adjuvant CT[12-14]. However, the most recent meta-analysis[13] was performed in 2007 and only included five randomized control studies. Moreover, it used only median survival time and 5-year survival rate instead of HRs to estimate survival difference, which was less precise. In our study, we estimated the survival difference by combining direct and indirect comparisons of different treatments. Moreover, we used both reported HRs and estimated HRs from all the included studies to minimize the selection bias. Thus, we provided the most powerful and reliable evidence that adjuvant CT is better than surgery alone in increasing overall survival for resectable pancreatic cancer.

Our network meta-analysis has several strengths. It is the first comprehensive analysis of all the major treatment strategies for resectable pancreatic cancer including neoadjuvant therapy, surgery, and adjuvant therapy. We combined both direct and indirect evidence to reach more precise conclusions, which also allowed us to compare therapies indirectly and rank different therapies clearly. Furthermore, we assessed both overall survival and toxicity of all the therapies. Our meta-analysis provides comprehensive and clear evidence for the treatment of resectable pancreatic cancer, which is great important and meaningful in clinical care.

The limitations of this meta-analysis also need to be acknowledged. First of all, the RCTs included in this analysis were conducted over four decades, and changes in CRT schedule, CT agents, schedules, and surgery techniques may affect the results. However, transitivity assumption was met and there was no evidence of statistically significant inconsistency in this network. This may have less effect on the result. Second, we included both neoadjuvant and adjuvant therapies to offer a com-prehensive overview. However, we included only a limited number of trials (n = 13), and only two trials evaluated neoadjuvant therapies. Thus, although no sig-nificant result about overall survival was found when comparing neoadjuvant therapies with other treatments, this conclusion about neoadjuvant therapies should be interpreted with some caution. Finally, since the definition and reporting type of toxicity were diverse in the included studies, we only summarized seven typical toxicity events as overall toxicity. Although some toxicity events may be neglected in this analysis, the results should still provide effective estimates.

The optimal treatment for resectable pancreatic cancer is still controversial.

This study aimed to identify the most effective approach for resectable pancreatic cancer using network meta-analysis.

We recommend surgery with adjuvant CT as the optimal care for resectable pancreatic cancer. Later research should be focused on the best agents for adjuvant CT.