Autoimmune pancreatitis (AIP) is defined as pancreatitis caused by irregular narrowing of the pancreatic duct accompanied by pancreatic swelling, fibrosis and lymphocyte infiltration, events that are related to autoimmune mechanisms. The 2010 International Consensus Diagnostic Criteria for AIP defined pancreatitis as “type 1” when increased levels of serum IgG4 were present and other organs were involved; lymphoplasmacytic sclerosing pancreatitis was the main histological characteristic. Apart from surgery, endoscopic ultrasonography-guided fine needle aspiration (EUS-FNA) is the only method for the histological diagnosis of AIP; however, this method is difficult. The use of larger-diameter FNA needles and trucut biopsy did not improve the diagnostic performance of EUS-FNA, but it has improved gradually. In this review, we look back at past efforts to improve the diagnostic performance of EUS-FNA and reveal the present state of EUS-FNA for the histological diagnosis of AIP type 1.

Core tip: Apart from surgery, endoscopic ultrasonography-guided fine needle aspiration (EUS-FNA) is the only method for the histological diagnosis of autoimmune pancreatitis (AIP). However, this method is difficult. Several attempts to improve the diagnostic performance of EUS-FNA have been undertaken, with gradual success. In this review, we examine past efforts and discuss the present state of EUS-FNA for the histological diagnosis of AIP type 1.

In 1993, a case accompanied by lymphadenopathy and IgG4 hypergamma-globulinemia was reported by Suzuki et al[1]. Thereafter, the concept of IgG4-related disease (IgG4-RD) was established as follows: IgG4-RD is characterized by elevated serum IgG4 accompanied by the swelling of multiple organs or tumoral lesions infiltrated by lymphocytes, with IgG4-positive plasma cells and fibrosis observed throughout the body[2,3]. In gastroenterology, autoimmune pancreatitis (AIP) type 1[4,5] and IgG4-related sclerosing cholangitis (IgG4-SC)[6-8] are the primary presentations.

AIP was defined by Yoshida et al[9] as pancreatitis caused by irregular narrowing of the pancreatic duct accompanied by pancreatic swelling, fibrosis and lymphocyte infiltration, events that are related to autoimmune mechanisms. Moreover, Hamano et al[4] reported elevated levels of serum IgG4 in AIP patients. The 2010 International Consensus Diagnostic Criteria (ICDC) for AIP defined pancreatitis as “type 1” when the levels of serum IgG4 are elevated and other organs are involved; lympho-plasmacytic sclerosing pancreatitis (LPSP) is considered the main histological characteristic[10]. Four characteristics have been identified as important for diagnosing LPSP, namely, periductal lymphoplasmacytic infiltrate without granulocytic infiltration, obliterative phlebitis, storiform fibrosis, and abundant (> 10 cells/HPF) IgG4-positive cells (Figure 1). The presence of three of these four characteristics is defined as level 1 histological findings. The presence of only two of these characteristics is defined as level 2 histological findings. 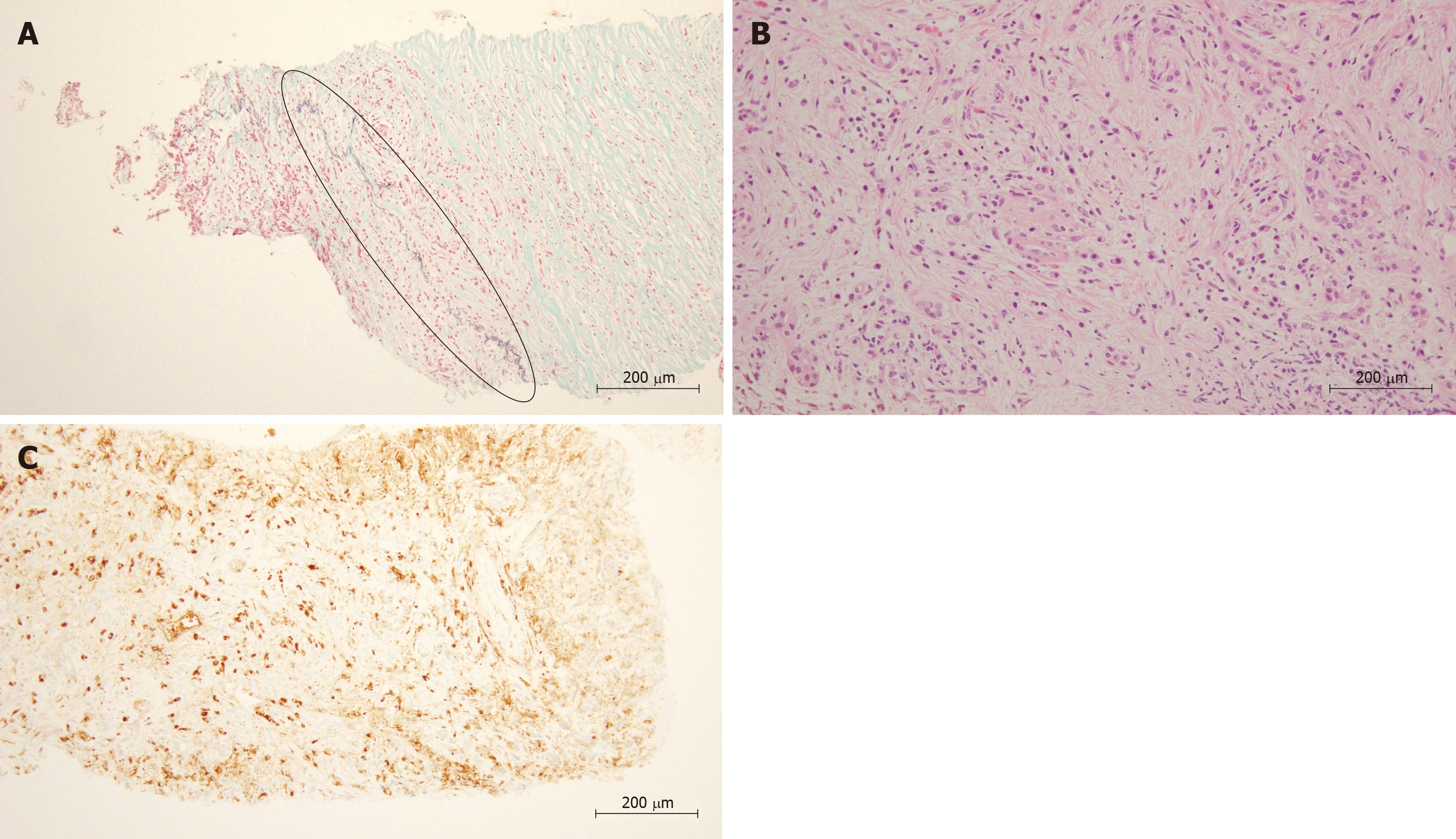 AIP can be diagnosed by imaging and increased serum IgG4 levels or by other methods[11]. However, a histological diagnosis of AIP requires level 1 pancreatic histological findings. Apart from surgery, endoscopic ultrasonography-guided fine needle aspiration (EUS-FNA) is the only method for the histological diagnosis of AIP. Furthermore, AIP cases associated with pancreatic cancer have been reported[12-16]. Therefore, EUS-FNA is important for the safe and noninvasive distinction of AIP from pancreatic cancer. In this report, we discuss the efficacy and present diagnostic performance of EUS-FNA for AIP type 1.

Reports were searched in PubMed and the Cochrane Library by using the following keywords: “autoimmune pancreatitis” and “endoscopic ultrasonography-guided fine needle aspiration”. Among the searched reports, only original articles were included in this review. Furthermore, we performed a manual search and added such articles to this review as necessary.

We introduce the achievements in the included reports in the following order: Before and after the ICDC, conventional EUS-FNA (22-gauge, 19-gauge), EUS-TCB, multicenter studies, and special needles.

REPORTS BEFORE THE ICDC

Before the ICDC, few reports described the use of EUS-FNA for the histological diagnosis of AIP type 1. In 2005, Deshpande et al[17] performed EUS-FNA in 16 AIP patients. Among these patients, three were found to have false-positive cytological diagnoses (one adenocarcinoma, one solid pseudopapillary neoplasm, and one mucinous neoplasm). The cellularity of the stromal fragments was significantly higher in the AIP samples than in the control samples (adenocarcinoma, chronic pancreatitis, etc.,). In the same year, researchers performed EUS-guided trucut biopsy (EUS-TCB) in three AIP patients. In two of the three patients, fibrosis and lymphoplasmacytic infiltration were observed. In 2009, Mizuno et al[18] performed EUS-TCB, and among nine AIP patients, four were diagnosed with probable LPSP. In 2011, Khalid et al[19] reported the diagnosis of two of 14 AIP patients with LPSP. In this period, the performance of EUS-FNA for the histological diagnosis of AIP was very poor.

REPORTS AFTER THE ICDC

After the ICDC were established, several reports described the use of EUS-FNA for the diagnosis of AIP. The results of these studies (excluding case reports) are shown in Table 1. In the following sections, we describe the details of these studies.

As mentioned above, EUS-TCB achieved somewhat modest results before the ICDC were announced. Before the ICDC, almost all of the reports on using EUS-FNA to identify AIP type 1 asserted that AIP could not be histologically diagnosed by EUS-FNA. However, Mizuno et al[18] reported the efficacy of EUS-TCB (referred to in the section REPORTS BEFORE THE ICDC).

Because AIP is a relatively rare disease, studies of EUS-FNA in AIP patients have had limited sample sizes. However, in 2016, two multicenter studies were performed, both of which used a 22-gauge needle for EUS-FNA.

Due to the difficulty of the histological diagnosis of AIP, EUS-FNA was performed using special needles. Kanno et al[26] used an automated spring-loaded Powershot needle (NA11J-KB; Olympus, Tokyo, Japan). In this report, 56% (14/25) of patients showed level 1 histological findings, and 80% (20/25) showed level 1 or level 2 histological findings. Obliterative phlebitis was observed in 40% (10/25) of patients. Although it is very difficult to prove obliterative phlebitis by EUS-FNA, this report showed promising results.

Recently, the use of SharkCore (Medtronic, Sunnydale, Calif) needles for EUS-guided fine needle biopsy (EUS-FNB) in AIP patients was reported. According to a report written by Detlefsen et al[27] in 2017, one AIP type 1 patient showed level 2 histological findings. However, obliterative phlebitis was observed in this patient. In the same year, Runge et al[28] reported EUS-FNB in two patients. Both patients showed a marked increase in IgG4-positive plasma cells. Although storiform fibrosis and obliterative phlebitis were not reported, these two patients likely showed level 2 or higher histological findings. In 2018, Bhattacharya et al[29] reported two patients who showed level 1 histological findings by EUS-FNB. Although the three reports on EUS-FNB using the SharkCore needle were case reports, all cases showed some histological findings as defined by the ICDC. The diagnostic performance of EUS-FNA for AIP could be improved by the further development of such needles.

Diagnosing AIP type 1 by EUS-FNA is currently difficult. However, the diagnostic performance of EUS-FNA for AIP is gradually improving over time and with the further development of special needles. In the future, further advancement of FNA needles and puncture methods will be warranted to improve the histological diagnosis of AIP.