METHODS: In this study, the PubMed, MEDLINE, Science Direct, Google Scholar and Scielo manuscripts were reviewed from 2009 to 2014.

CONCLUSION: The most sensitive drug is rifabutin and the lowest sensitive drug is metronidazole in the world. The worldwide H. pylori antibiotic resistance to clarithromycin and levofloxacin has increased during the last 6 years. The present systematic review show alarming results and a novel plan is needed for eradication therapy of H. pylori infections.

Core tip: Because of the rising frequency of antimicrobial resistance, management of Helicobacter pylori (H. pylori) infections is a challenge for physicians. We found global frequency rate of resistance is high in Africa. The most sensitive drug is rifabutin and the lowest sensitive drug is metronidazole in the world. The worldwide H. pylori antibiotic resistance to clarithromycin and levofloxacin has increased during the last 6 years. Resistances to antimicrobial agent’s reports describe dramatic decrease of antibiotics efficacy.

Helicobacter pylori (H. pylori) is a motile, curved and Gram negative bacillus[1]. H. pylori certainly is the most prevalent human infection, the frequency of infection due to H. pylori is nearly 50% in the world and in developing country is as high as 80%-90%[2]. This bacterium colonizes the stomach of human and its infection is correlated with gastritis, peptic ulcer disease and extra-digestive diseases[3,4]. H. pylori is also considered as a human carcinogen[5]. Since, H. pylori eradication therapy represents a key clinical essential. Unfortunately, therapy against H. pylori has turned out to be more difficult over the years, principally due to the great decrease of standard eradication therapies efficacy.

Although H. pylori is sensitive to many antibiotics in vitro, just a few antibiotics can be used in vivo to treat infected patients. Management of H. pylori infections are recommended in all suggestive individuals[6]. According to the latest Maastricht Guidelines, in regions of low clarithromycin resistance, clarithromycin-containing treatments are recommended for first-line empirical treatment[7]. In regions of high resistance to clarithromycin, the quadruple treatment including bismuth has been proposed as first-line treatment. In case of unavailability of this therapy, non-bismuth (three antibiotics plus Proton pump inhibitors) quadruple therapy and the so-called “sequential therapy” (that includes five days of PPIs plus amoxicillin followed by five more days of PPIs plus metronidazole and clarithromycin) have been recommended as an alternative[7]. Table 1 is shown mode of actions and resistance mechanisms of antibiotics used for treatment of H. pylori infection.

The objective of this paper was to review previous studies about the rates of antimicrobial resistance in H. pylori isolates obtained from worldwide during last 6 years in order to evaluate the trend of antibiotic resistance.

In the present study, different computer-assisted searches were achieved using PubMed, MEDLINE, Science Direct, Google Scholar and Scielo. Separately searches were carried out on all English language literatures published through 2009 to 2014, by the key words: Helicobacter pylori, H. pylori, resistance, metronidazole, levofloxacin, amoxicillin, clarithromycin, tetracycline, and rifabutin. Full articles related searches were saved, and articles written in foreign languages were translated when essential. When more than one publication from the same author was obtainable, only new version, counting the whole population was enrolled. Two investigators (Ebrahimzadeh Leylabadlo H and Mohammadzadeh Asl Y) independently and in a blinded manner assessed the articles using pre-designed data extraction.

The following information was collected: (1) sum of bacteria incorporated; (2) rate of antibiotic resistant; and (3) the geographic area involved. The data were summarized in extraction table and analyzed manually. Finally, Excel 2007 software was used to draw charts. 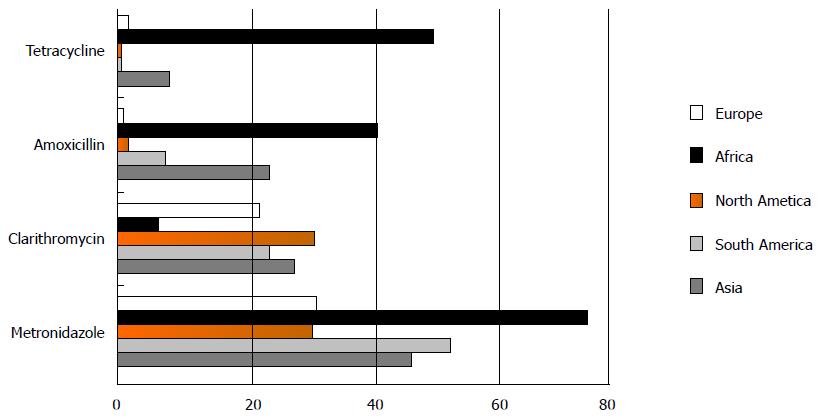 Monitoring of resistance to antimicrobial agents is important for H. pylori infections therapy in medical practice[17]. Resistance to antimicrobial agents creates at risk H. pylori eradication in the world[10,98]. The most recent recommendations on H. pylori therapy suggested that initially management had better be personalized based on clarithromycin and metronidazole resistance. In fact, fourteen days triple-therapy is recommended in area where resistance to clarithromycin is more than 15% to 20%, if resistance to metronidazole is more than 40%, the association with amoxicillin is preferred[17]. At the present, due to H. pylori antibiotics resistance, eradication therapy appears was not carried out as simple as and we are now founded many failures which make the use of standard therapy unacceptable in many parts of the world[107]. This article systematically studied the latest data on H. pylori resistance to antibiotic.

The prevalence of amoxicillin resistance in Europe countries and North American is low from zero in certain area as Finland, Germany, Norway and Poland, 1.4% in Spain to 2% in United States. It seems the government policy possibly to limit the use of antibiotic for infectious diseases in European and North American countries. The incidence of amoxicillin resistance in H. pylori seems to increase specially in Asia and South America, where these antibiotics can be obtained without prescription. H. pylori resistance rates of 97.5%, 72.5%, 66% and 20.5% for amoxicillin have recently been reported in South Africa, India, Nigeria and Colombia, respectively.

Tetracycline is a bacteriostatic and broad spectrum antimicrobial agent that is active against H. pylori and tetracycline is the most generally used antibiotic for treatment of H. pylori and other infectious diseases[109]. Tetracycline is extensively used in many countries, but resistance to this antibiotic has not become a great problem yet. Management failure owing to the tetracycline resistant has been reported[112,113], though there is not enough data obtainable until now to determine the impact of this resistance on management success.

Helicobacter pylori (H. pylori) is a most important human pathogen associated with significant disease and fatality.

Due to the rising frequency of antimicrobial resistance, management of H. pylori remains a challenge for physicians in most parts of the world.

Search was carried out about H. pylori antimicrobial resistance literatures published through 2009 to 2014.

This is a systematic review article on H. pylori resistance to antibiotics. The manuscript is well written and the topic of interest.