Although boron has been a chemical element of interest since the ancient times, only a few boron-containing compounds (BCCs) had been used for medicinal purposes before the 21st century. Among these, only boric acid has been explored in multiple therapeutic applications. Hence, it is common to extrapolate from boric acid to all BCCs, supposing a similar biological effect. However, boric acid is just one of dozens of BCCs in nature and thousands available from chemical synthesis. Nowadays, there is a boom in research on new BCCs as potential tools in the prevention, diagnosis and therapy of human disease. We herein discuss the new role of BCCs in drug development, with emphasis on the compounds for which a mechanism of action has been proposed or demonstrated. Because of data gathered in recent years, BCCs have expanded beyond the well-known fields of antimicrobial and antineoplastic agents, now being explored for their possible use as enzyme inhibitors, regulators of protein expression and modulators of the immune response, as well as in biomaterials. We suggest that translational medicine can accelerate the medicinal applications of BCCs, which is especially important for the human diseases that are generating a high global burden.

Core tip: Boron-containing compounds (BCCs) have growing relevance in the biomedical field. The former almost exclusive focus on boric acid has expanded to include a wide range of BCCs in chemical and biomedical studies. The reported findings suggest that research in this field will continue increasing exponentially in the near future. Through translational medicine, the boron atom is being introduced into new compounds to explore its use in the prevention, diagnosis and therapy of multiple pathologies.

Boron could have been involved in the origin of life as it is known today[1]. Although some evidence points to the ability of borates to react with and stabilize primordial substances related to nucleic acids, the participation of boron-containing compounds (BCCs) in this sense is not completely clear[2]. Several other effects of boron have been described[3,4], showing that it is of notable importance in biology[5]. However, most information about its relevance to life is linked to the effects of boric acid or borates on organisms[6].

As a result of artificial synthesis, the number of reported BCCs is currently undergoing a rapid increase, especially organoboron compounds (those with boron, carbon, hydrogen and nitrogen in their structure)[4]. There is no doubt about the expanding interest in generating new BCCs for testing in biological systems[3,6].

By far the greatest abundance of data on the biological activity of BCCs comes from the investigation of boric acid[5,6], which has been examined for centuries. Nevertheless, the advances in the last four decades have provided extensive knowledge about the advantages of other BCCs over their boron-free counterparts. Consequently, growing evidence exists about the action of BCCs on membrane, cytoplasmic and nuclear receptors, as well as on enzymes in many biological compartments[4].

In the last century, research on BCCs has gone far beyond the former limited use of boric acid (the most abundant BCC in nature) as an antiseptic agent. Today BCCs are employed in various therapies, including boron-neutron capture therapy, an antineoplastic drug (bortezomib), and anti-microbial agents (boromycin and tavaborole)[4].

In biology, some key genetic events can be modulated by BCCs (and potential tools are being generated with this aim)[7,8]. Indeed, the absence of boron in the environment or diet is able to disrupt some physiological processes in unicellular organisms, plants and animals[5]. In humans, BCCs participate in many physiological processes, such as the growth and maintenance of bones, wound healing, micronutrient absorption, electrical activity, cell proliferation, protection against some toxic agents (including traditional chemotherapy agents), and the modulation of hormones, antioxidant enzymes and inflammatory biomarkers[9,10]. The greater number of toxicological studies of BCCs has allowed for the identification of potential toxins as well as drugs with diminished risk[6].

Over the last several decades, some BCCs (found in nature or developed with chemical synthesis) have been attractive as enzyme inhibitors, antineoplastic drugs and anti-infectious agents (Table 1)[4]. In the last few years, BCCs have been designed to act on G-protein coupled receptors[11], ionic channels[12], membrane receptors with enzymatic domains[13] and all types of enzymes[14]. BCCs also are being examined as modulators of the flow of genetic information within biological systems[15], the cell-cycle[16], metabolism[17] and inflammatory processes[18]. This modulation frequently implies more than one molecular target.

Additionally, pharmacokinetic parameters are used to describe the properties of BCCs. The stability of these compounds in physiological conditions is documented for boron-containing acids, borinates, boronates, boranes and boron-clusters, among other compounds[19]. Some families of membrane transporters have been involved in the ability of BCCs to cross biological membranes, as well as in absorption and excretion[19,20]. The characterization of the partition/distribution coefficient for some BCCs has allowed for the selection of compounds aimed at a specific organ or tissue[19].

The determination of some parameters of the boron atom had led to its inclusion in theoretical assays related to biological effects and drug discovery[21]. Most recently, new breakthroughs in the biomedical field are concerned with boron clusters, boron-containing nanotubes and sheets for drug delivery systems, and biomaterials for covering or substituting tissues in multicellular organisms[22].

In conclusion, the role of boron in biology and medicine has developed far beyond the administration of boric acid to be a source of boron as a microelement in living organisms. BCCs are not only promising compounds for the development of drugs, but also of biomaterials and agents that can act in a preventive and diagnostic sense.

Shortly, a growing number of BCCs will be introduced as drugs due to the attractiveness of their increased potency and efficacy on all the known receptor types targeted for diseases with a high global burden (infectious diseases, cancer, immunological diseases, metabolic disturbances, neurodegeneration, etc.). The leaders in the pharmaceutical industry recognize this trend and are actively involved in the discovery and development of potential drugs; medicinal chemistry and translational medicine have accelerated the development of new drugs (Figure 1). 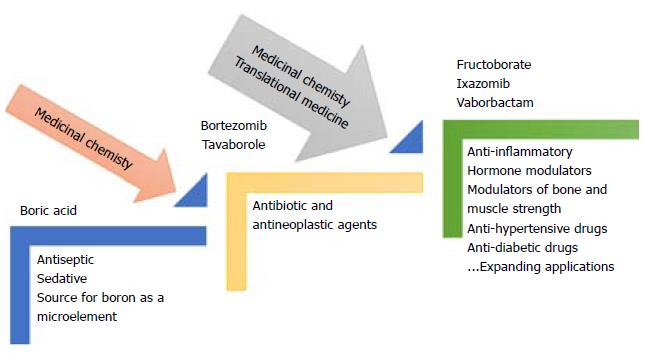 The role of boron atom in new chemical structures is beyond the development of new drugs as it occurred in the past century with chlorine or fluorine addition[23,24]. Moreover, the recent advances in boron chemistry may result in applications in biology and medicine that were very recently considered science fiction. For instance, BCCs could soon be generated to stabilize DNA or RNA structures, heal individuals with compromising mutations by substitution of boron-containing alpha amino acids[9,15,16,25], participate in smart drug delivery systems, and construct biomaterials with better features than fullerenes and structurally-related materials[22]. It is even feasible that BCCs will eventually be designed to change the appearance of a species[26].

The application of translational medicine is now accelerating the process of developing and testing such compounds for humans. There is no doubt about the relevance of boron in the biomedical field. Whereas some BCCs have the same or a similar mechanism of action as their boron-free counterparts, others show a different interaction with target receptors. The mechanism of action of BCCs is often revealed by pharmacokinetic parameters. In some cases, BCCs have exhibited greater stability due to the strength of the bonds between the boron atom(s) and the carbon, nitrogen or oxygen atoms in their structure. The current expanding diversity of BCCs requires efforts for their classification and the clear definition of their structure-activity relationships in biological systems.