Long-term exposure to bioincompatible peritoneal dialysis (PD) solutions frequently results in peritoneal fibrosis and ultrafiltration failure, which limits the life-long use of and leads to the cessation of PD therapy. Therefore, it is important to elucidate the pathogenesis of peritoneal fibrosis in order to design therapeutic strategies to prevent its occurrence. Peritoneal fibrosis is associated with a chronic inflammatory status as well as an elevated oxidative stress (OS) status. Beyond uremia per se, OS also results from chronic exposure to high glucose load, glucose degradation products, advanced glycation end products, and hypertonic stress. Therapy targeting the cannabinoid (CB) signaling pathway has been reported in several chronic inflammatory diseases with elevated OS. We recently reported that the intra-peritoneal administration of CB receptor ligands, including CB1 receptor antagonists and CB2 receptor agonists, ameliorated dialysis-related peritoneal fibrosis. As targeting the CB signaling pathway has been reported to be beneficial in attenuating the processes of several chronic inflammatory diseases, we reviewed the interaction among the cannabinoid system, inflammation, and OS, through which clinicians ultimately aim to prolong the peritoneal survival of PD patients.

Core tip: Long-term exposure to bioincompatible peritoneal dialysis (PD) solutions frequently results in peritoneal fibrosis and ultrafiltration failure, which limits the life-long use of PD therapy. Beyond uremia per se, oxidative stress (OS) also results from chronic exposure to high glucose load, glucose degradation products, advanced glycation end products, and hypertonic stress in PD patients. Therapy targeting the cannabinoid signaling pathway has been reported in several chronic inflammatory diseases with elevated OS. In this article, we review the interaction among the cannabinoid system, inflammation, and OS, through which the health-care professionals ultimately aim to prolong the peritoneal survival of PD patients.

As chronic kidney disease progresses to end-stage renal disease, uremia ensues requiring the use of long-term dialysis therapy. Both uremia and dialysis give rise to elevated oxidative stress (OS)[1-4], which is detrimental to the patients’ health. A recent survey indicated that approximately 11% of dialysis patients undergo peritoneal dialysis (PD) therapy worldwide, estimating to be more than 272000 patients with an 8% annual growth rate globally[5]. Beyond uremia per se, PD patients are at an increased risk of inflammation and OS, both systemically and locally, because of the chronic exposure to high glucose load[6-15], advanced glycosylated end products (AGEs)[16-18], glucose degradation products (GDPs)[18-21], and hypertonic stress[9,22-24]. After long-term exposure to various GDPs and AGEs, mesothelial cells of PD patients undergo a de-differentiation process, followed by peritoneal fibrosis and ultrafiltration failure[25-29]. In a large peritoneal biopsy study, peritoneal tissue samples from 212 subjects including healthy controls, hemodialysis and PD patients were examined. They found that peritoneal fibrosis was absent in normal individuals but was present in 28% of samples from hemodialysis patients and up to 56% of biopsies from PD patients[30]. Although whether a uremia-induced chronic inflammation status causes OS or OS leads to a proinflammatory process in uremic patients remains uncertain[1,4,31], therapeutic strategies for peritoneal damage targeting OS have been reported, such as antioxidants[12,18,32,33], scavenging agents for reactive oxygen species (ROS)[34-36], the trace element selenium[37], and gaseous mediators[38,39].

Cannabinoid (CB) signaling has also been reported to be effective in treating a variety of disease entities with elevated OS, including diabetic macrovascular and microvascular complications[40-50], cardiomyopathies[51-57], liver injury and fibrosis[58-64], cholangiopathies[65], colitis[66,67], drug nephrotoxicity[68,69], and autoimmune diseases[70] (Table 1). Since the peritoneum of long-term PD patients is under a chronic pro-inflammatory status, it is possible that the CB receptor (CBR) signaling system may be inappropriately modulated. In this article, we reviewed the sources and influence of OS in PD patients, and the therapeutic rationale and mechanisms of targeting the CB signaling system to reduce OS.

Uremia per se and dialysis therapy both lead to a pro-oxidant status, which can lead to increased OS in patients receiving hemodialysis or PD therapy[1-4]. In particular, PD patients are exposed to hypertonic glucose solution on a long-term basis, which is not only toxic to mesothelial cells[6,71] but also promotes immune cell apoptosis[72]. Moreover, the high-temperature sterilization process produces GDPs such as methylglyoxal (MGO), acetaldehyde, formaldehyde, and 3-deoxyglucosone in PD dialysate[73-76]. GDPs possess strong oxidative properties and toxicity, and can induce AGEs[77]. In addition, it has been demonstrated that MGO, a key GDP, in PD dialysates inhibits the insulin signaling pathway, resulting in increased endogenous ROS production and subsequent cell injury[78]. Furthermore, 2-33 μmol/L of MGO has been reported to be present in commercial glucose-based PD fluids[79,80].

After long-term exposure to various GDPs and AGEs, mesothelial cells undergo a de-differentiation process and peritoneal fibrosis ensues[25-29]. Furthermore, these sites of chronic inflammatory have been associated with progressive peritoneal angiogenesis[29,81-83], and finally a reduction in the efficacy of PD. However, therapeutic strategies for these pathogenic processes have not been fully developed[81], and so some PD patients still develop peritoneal fibrosis or even encapsulating peritoneal sclerosis, a disastrous and highly fatal condition.

Low GDP PD dialysates can prevent peritoneal injury by PD-induced OS. However, the relatively high cost limits their full implementation. Moreover, even though the concentration of GDPs in the new generation of PD dialysates is low, it still exists[84-86]. Meanwhile, as long as the PD dialysate is glucose-based, glucose load per se results in ROS production[6-15]. Fortunately, therapies reducing peritoneal OS are under investigation, and include antioxidants[12,18,32,33], ROS scavengers[34-36], selenium[37], and gaseous mediators[38,39] (Figure 1). 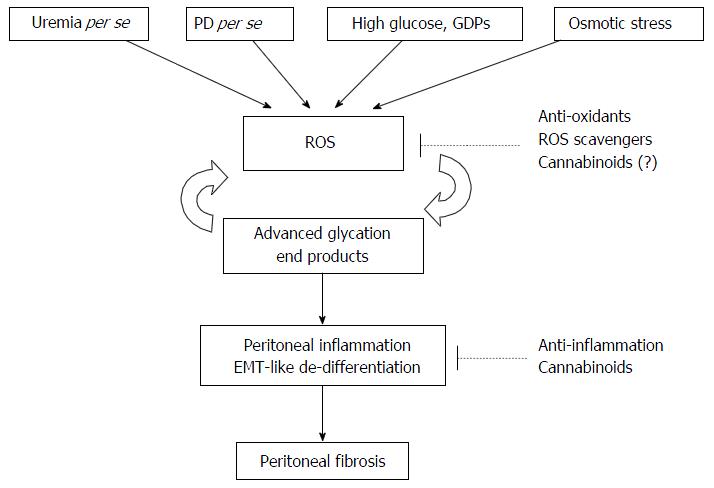 In addition to low GDP PD dialysates, non-glucose-based PD dialysates such as icodextrin are free of GDPs and have been shown to be beneficial in fluid control and small solute clearance[87]. It has also been reported that peritoneal OS is reduced when using icodextrin compared with conventional PD dialysates[88].

However, other studies have reported conflicting results in that the osmotic stress, a type of stress resulted from hypertonic PD dialysate exposure, leads to oxidative DNA damage of peritoneal mesothelial cells through lipid peroxidation. Such peritoneal oxidative injury may then lead to mesothelial cell death either through apoptosis or necrosis[9,22-24]. Therefore, persistent efforts are warranted to develop an optimal solution.

Our recent study suggested that using CBR ligands as an additive in PD dialysate may be a promising solution to treat dialysis-induced peritoneal inflammation[89]. There are two subtypes of CBRs, type 1 CB receptor (CB1R) and type 2 CB receptor (CB2R). The former mainly exists in the brain and regulates inhibitory neurotransmitters on neurons through the psychoactive drug cannabis or endocannabinoids such as anandamide. Nevertheless, it has recently been found that CB1R also exists in tissues other than that of the central nervous system, and that its function varies in different organs[73]. CB1R antagonists and CB2R agonists have been shown to decrease inflammation and OS[48], and previous studies have also shown that CBR plays an important role in liver fibrogenesis[90-94]. Moreover, hepatic fibrosis can be rescued by knockout of the CB1R gene or by administration of the CB1R antagonist[93,95,96]. In contrast, CB2R is located on immune cells and modulates cytokine release[97,98]. Recent studies have shown that the activation of CB2R ameliorates liver fibrogenesis through inhibiting myofibroblast cell proliferation[92,99]. Furthermore, CBR ligands such as cannabidiol have been proven to be well-tolerated without adverse effects when administered to humans on a long-term basis[48].

Only a few studies have been published on pharmacological modulation targeting peritoneal inflammation and fibrogenesis using CBR ligands[100]. Our recent study indicated that the pharmacological effects of CBR ligands against dialysate-induced peritoneal fibrosis may involve a diverse signaling system including the TGF-β1-PI3K pathway[89], and that this offers a promising therapeutic strategy for the prevention of peritoneal fibrosis in patients receiving long-term PD. Therefore, we suggest that CBR signaling might play an important role in the pathogenesis of dialysis-induced peritoneal inflammation and ROS production, which required further studies.

As aforementioned, it has been reported that CB2R is located on immune cells and modulates cytokine release[97,98]. The CB2R expression of human lymphocytes was downregulated by TGF-β stimulation[101], which was not seen in human mesothelial cells[89]. These findings suggest that TGF-β1 might have different physiological function in different cell types. Meanwhile, CB2R activation might exert its anti-fibrotic effects not directly to cells undergoing fibrotic change but indirectly through modulating the immune cells. Such interaction among different types of cells underlines the pathophysiological role of CBR signaling pathway in uremic and/or dialysis injuries, which is partly supported by a recent study showing that systemic administration of interleukin-10, an anti-inflammatory cytokines secreted by M2 macrophages, significantly reduced fibrous peritoneal thickening[102]. Therefore, current evidence indicates that beyond mesothelial cells, macrophages and vascular endothelial cells also contribute to ROS production during PD-induced peritoneal fibrosis.

THERAPEUTIC POTENTIAL OF CANNABINOID SIGNALING ON PD-INDUCED OS AND INFLAMMATION

It has been reported that modulating the CB signaling system is beneficial in treating various diseases resulting from increased OS including diabetic macrovascular and microvascular complications[41-43,48,57], cardiomyopathies[51,55-57], liver injury and fibrosis[58,60-64,103], cholangiopathies[65], colitis[66,67], drug nephrotoxicity[68,69], and autoimmune diseases[70]. At present, evidences of the therapeutic benefit of CBR ligands on peritoneal OS are lacking and deserve investigations.

Furthermore, recent studies have also shown significant anti-fibrogenic effects of CBR ligands in the liver[91-93,95,96,99]. However, the effects of CBR ligands on peritoneal tissue have rarely been studied, with only one recent study reporting that the CB2R agonist reduced the number of peritoneal macrophages in a murine peritonitis model induced by thioglycollate, an AGE derivative[104]. Furthermore, we recently demonstrated that both the selective CB1R antagonist (AM281) and the selective CB2R agonist (AM1241) were able to ameliorate MGO-induced peritoneal fibrosis in vivo, indicating that pharmacological modulation of CBR may be a feasible approach to optimize the biocompatibility of peritoneal dialysis fluid. However, ACEA, a CB1R agonist, has been shown to have an opposite effect to AM281 with regards type I collagen expression in cultured mesothelial cells, indicating specific anti-fibrogenic activity of the CB1R antagonist[89].

During peritoneal fibrosis, mesothelial cells undergo a process of myofibroblastic conversion. This is a complex process which has been reported to be associated with increased levels of TGF-β1, leptin, metalloproteinase-2, vascular endothelial growth factor, Snail, and the receptor for advanced glycosylated end products[79,105,106]. TGF-β1 has long been known to play crucial roles in the fibrogenic process of the peritoneum[107,108]. A previous study demonstrated that a high glucose load stimulates the production of TGF-β1 in peritoneal mesothelial cells[109]. Moreover, AGEs have been shown to increase the expression of TGF-β1, contribute to the development of sub-mesothelial fibrosis[110], and significantly contribute to increases in peritoneal OS. Meanwhile, our recent study showed that such EMT-like processes can be attenuated by the selective CB1R antagonist, AM281[89]. It is quite possible that OS is involved in the CBR-related pharmacological effects against peritoneal fibrosis. However, the exact pathogenic mechanisms between the CBR signaling pathway and uremic and/or dialysis injuries remain largely unknown.

Compared with hemodialysis patients, the chronic use of PD dialysate exposes PD patients to additional OS. The influence of such OS on the patients’ health can be both systemic and local, leading to cardiovascular diseases and peritoneal fibrosis, respectively. It has been shown that OS plays a critical role in the pathogenesis of chronic inflammatory diseases, and therefore targeting the CB signaling system may offer a potential therapeutic strategy to reduce dialysis-induced peritoneal fibrosis and eventually to prolong the peritoneal survival of PD patients.