We report the case of a 44-year-old male patient who presented with acute renal artery occlusion, 3 d after first injection of infliximab for steroid refractory attack of ulcerative colitis. Extensive work-up provided no evidence of predisposing factors for arterial thrombosis. Infliximab was thus suspected in the genesis of thrombosis, based on both intrinsic and extrinsic criteria. At month 3 after thrombosis with ongoing anticoagulation, angio-tomodensitometry showed complete revascularization of the left renal artery with renal atrophy. Renal function remained normal and the patient was still in steroid free remission on mercaptopurin monotherapy at maximal follow-up. Few thromboembolic events have been described with anti- tumor necrosis factor (TNF) agents, but it is the first case reported of renal artery thrombosis after infliximab infusion. In addition, we review thrombosis associated with anti-TNF agents.

Core tip: To the best of our knowledge, it is the first case reported of renal artery thrombosis after infliximab infusion. Evidence for drug induced toxicities are usually lacking and the diagnosis in our patient was based on both intrinsic and extrinsic criteria in favour of a direct consequence of infliximab administration. In the literature, only few reports have been published on arterial or venous thrombosis with these drugs. The arterial thrombosis are unusual and are mostly myocardial infarction or cerebrovascular accident. Renal arterial thrombosis in patient receiving infliximab is possible and clinician should be aware of this challenging unusual condition.

We report the case of a 44-year-old male patient who presented with acute renal artery occlusion, 3 d after first injection of infliximab for steroid refractory attack of ulcerative colitis.

A 44-year-old European male was diagnosed with ulcerative colitis (UC) in 2004. He presented with corticosteroid dependent pancolitis, with ongoing prednisolone treatment at 40 mg/d from the first flare. Azathioprine was introduced, at a daily dosage of 2.25 mg/kg but rapidly withdrawn due to intolerance. The patient was then administered mercaptopurin at a daily dosage of 50 mg, allowing steroid withdrawal. From 2005 to 2009, the patient remained asymptomatic with mercaptopurin at 50 mg/d and mesalazine at 2 g/d. Colonoscopy was then performed, revealing normal aspect, with no sign of disease activity and complete mucosal healing at that time. In February 2009, mercaptopurin was discontinued, and mesalazine was continued alone as maintenance therapy. The patient remained in remission until July 2011, when he was admitted to the glycemic index (GI)-intensive care care unit due to a severe attack of UC. He presented abdominal pain, bloody diarrhea with more than 10 daily bowel movements, weight loss of 4 kg and asthenia. Prior to admission he had been prescribed a short course of non-steroidal anti-inflammatory drugs for a dental abscess. Examination by rectosigmoidoscopy showed many superficial ulcerations and erythema without any healthy mucosa, corresponding to an endoscopic Mayo sub score of 3. Histology revealed inflammation suggesting a UC flare but no evidence of viral inclusion was found. He had a C-reactive protein level of 42 mg/L and hypoalbuminemia at 29 g/L. Stool cultures and Clostridium difficile toxin search were negative. Cytomegalovirus infection was ruled out based on negative blood polymerase chain reaction and absence of detectable virus on rectal biopsies. Treatment associating IV corticosteroid (1 mg/kg per day), corticosteroid enemas, bowel rest and antibiotics (ceftriaxone and metronidazole) was unsuccessful. At day 5 after admission, infliximab rescue treatment was decided and the patient received a 2-h infusion of infliximab at 5 mg/kg. The symptoms rapidly responded to treatment, with complete disappearance of abdominal pain, bleeding and diarrhea. The patient was then discharged 4 d later, mercaptopurin was reintroduced and a second infusion of infliximab was scheduled at week 2 after the first infusion. However, the day after discharge, he was readmitted to emergency room for acute pain in the left iliac fossa, radiating to the genital organs. He had neither fever, nor signs of UC flare. Microscopy urine analysis found microscopic hematuria without leukocytes or bacterial colony. Renal ultrasound found no urinary obstruction. Contrast-enhanced abdominal computer tomography (CT) showed multiple areas of acute renal infarction on the left side, secondary to thrombosis of the renal branch arteries (Figures 1 and 2). Intravenous anticoagulation was introduced first, using non-fractioned heparin then relayed, at day 3 by vitamin K antagonists aiming at an international normalized ratio between 2 and 3. No attempt at revascularization was made as recommended by the vascular surgeon. Extensive etiologic work-up in search of any predisposing condition was performed and remained negative. It included search for antithrombin III, protein S or C deficiency, test for JAK 2, factor II and factor V mutations and paroxysmal nocturnal hemoglobinuria as well as homocystein, anti-cardiolipin (ACL), anti-phospholipid, and anti-nuclear antibody dosage. Transthoracic echography and rhythmic holter recordings ruled out embolic disease. At month 3 after thrombosis with ongoing anticoagulation, angio-tomodensitometry showed complete revascularization of the left renal artery with renal atrophy. Renal function remained normal and the patient was still in steroid free remission on mercaptopurin monotherapy at maximal follow-up. We concluded that renal artery thrombosis was related to infliximab infusion in this UC patient. We then made a formal declaration to the local French pharmacovigilance and drug safety authorities. 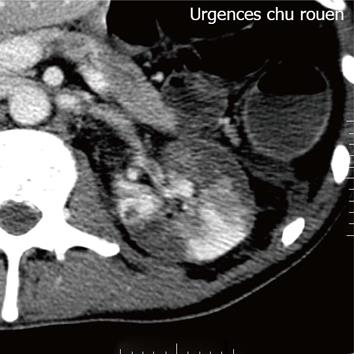 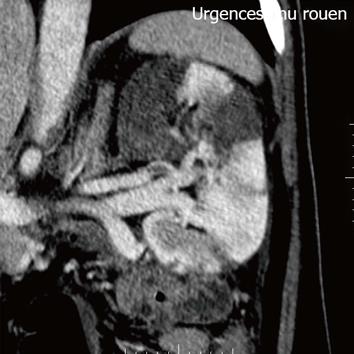 Figure 2 Axial section at the level of renal hila demonstrates a filling defect within the left renal artery due to a thrombus.
DISCUSSION

To the best of our knowledge, this is the first reported case of renal artery thrombosis after infliximab infusion. Evidence for drug-induced toxicity is usually scarce but in our patient diagnosis was suspected based on both intrinsic and extrinsic criteria in favor of a direct consequence of infliximab administration.

Infliximab is a chimeric monoclonal antibody against tumor necrosis factor-α (TNF-α). In the literature, only a few reports have been published on arterial or venous thrombosis with these drugs. Arterial thrombosis is unusual and presents mostly as myocardial infarction (MI) or cerebrovascular accident (CVA). In 2011, Korswagen reported 8 thromboembolic events (TEE) in a retrospective cohort of 272 patients treated by adalimumab, including 4 cases of deep vein thrombosis (2 pulmonary embolisms, 1 phlebitis, and 1 optical vein thrombosis) and 4 cases of arterial thrombosis (1 CVA, 1 MI, 1 CVA and MI, and a transient ischemic attack)[1]. Anti-adalimumab antibodies were detected in four of these eight patients. The incidence rate of TEE was respectively 26/1000 and 8.4/1000 persons per year for patients with and without anti-adalimumab antibodies, with an adjusted hazard ratio of 7.6 and a median period of occurrence of 78 and 156 wk respectively for patients with and without antiadalimumab antibodies[1]. Mehta et al[2] described a right common femoral artery thrombosis 3 d after a second dose of infliximab in a patient with Crohn’s disease. Thrombophilia screening and immunologic biology were negative in this report. The patient presented spontaneous arterial revascularization and underwent right hemicolectomy to treat severe disease flare. Petitpain et al[3] reported 85 TEE, which were declared in drug safety records between 2000 and 2006, in patients treated by TNF-α inhibitors for inflammatory bowel disease (IBD) or rheumatoid arthritis. Forty-two arterial TEE were observed in this series including 20 MI, 7 CVA, 6 lower limb arterial thromboses, 1 CVA with MI, 1 retinal thrombosis, and 7 other thromboses. Mean duration of TNF-α inhibitor therapy was 10.6 months and 79 out of 85 patients received concomitant systemic corticosteroids or methotrexate or COX (cyclo oxyge nase)-2 selective inhibitors. Sixteen of the 42 patients with arterial TEE had two or more additional risk factors for cardiovascular events, including tobacco addiction, arterial hypertension, or dyslipidemia. Anti-TNF agent was reintroduced in 18 patients without complication, after complete or partial patency. Regarding acute vascular events involving renal vascularization, only Tabibian et al[4] described combined inferior vena cava and bilateral renal vein thrombosis in a woman with UC, 4 wk after the third injection of infliximab.

IBD and TEE have been associated since 1936[5]. The relative risk of TEE is increased by around 3 in IBD[6] and exceeds 15 during flares[7]. Although the physiopathology remains unclear, previous studies have sought to explain this association. Immobilization of in-patients, surgery, indwelling catheters, and hyperhomocysteinemia associated with folate or vitamin B12 deficiencies or bleeding disorders may be part of the explanation in some patients. However, systemic inflammation is probably the main culprit through activation of the coagulation cascade with increased thrombin and platelet activation[8]. The formation of immune complex might also have contributed to the occurrence of TEE. Immune complex can activate platelets via the Fcγ-receptor and complement system, through induction of aggregation and procoagulant particle release. This factor induces more venous TEE[9].

Uncontrolled production of ACL, anti-phospholipid, and anti-nuclear auto antibodies, could be responsible for TEE. ACL antibodies are the most significant in terms of thrombogenicity and may contribute to a clinical “lupus-like’’ syndrome secondary to TNF-α-inhibitors[10]. The use of infliximab and adalimumab has been associated with an increasing number of autoimmune diseases[11]. This autoimmunity is thought to be due to a decrease in apoptosis of inflammation bodies, a predominant Th2 response, and lack of control of some B cell populations[12]. A statistically significant increase in frequency is seen for Immunoglobulin M and Immunoglobulin G aCL after 3 mo of treatment with infliximab[13]. However, there is no established link between the presence of antibodies and the degree of activation of systemic inflammation responsible for risk of embolism[1]. TNF-α inhibitors may also impact the vascular system through other mechanisms. These latter could drive production of manganese superoxide dismutase, promote arterial vasodilatation by inducing nitric oxide production, induce endothelial dysfunction, alter lipid profile and homocysteine rate, and be partially responsible for insulin resistance and subclinical atherosclerosis. All these effects might explain an increase in TEE[14].

Moreover, the role of glucocorticoids can not be excluded. Most of our patients who experienced thrombosis events were on concomitant corticosteroids at the time of thrombosis. Corticosteroids can induce changes in the coagulation and fibrinolytic pathways (elevated fibrinogen, and suppressed tPA activity)[15]. They limit the availability of arachidonic acid for prostocyclin synthesis, which may allow platelet thromboxanes to dominate on the endothelial surface, favoring vasoconstriction and thrombus formation. Theoretically, the ability of corticosteroids to reduce inflammation may offset these prothrombotic risks. The odds ratio reported for thrombosis event is 1.87 (95%CI: 1.37-2.53)[16].

TNF-α, a proinflammatory and potential procoagulant cytokine, is elevated in IBD. TNF-α increases leukocyte adhesion, endothelial transmigration, vascular leakage, and alteration in the coagulation system. It induces prothrombotic status. CD40/CD40 ligand links the inflammation and coagulation pathways. This couple is responsible for leukocyte recruitment and tissue damage in the endothelial cells. In IBD, overexpression of this couple has been evidenced in mucosal microvascularization[17]. TNF-α inhibitors decrease the CD40/CD40L pathway. TNF-α inhibitors have been shown to drive production of manganese superoxide dismutase, which is a free radical scavenger. They promote arterial vasodilatation by inducing mainly coronary nitric oxide production. They are also responsible for endothelial dysfunction, alteration of lipid profile, concentration of homocysteine, insulin resistance, and subclinical atherosclerosis, which could all explain the increase in TEE[18].

Our case observation also highlights the difficulties involved in managing renal arterial thrombosis. In usual circumstances, thrombosis is trauma-related, requiring simple anticoagulation treatment. Revascularization does not impact unfavorable outcomes, such as hypertension or renal failure. Therefore, it should probably be reserved for patients with solitary kidney or bilateral thrombosis[19]. When an embolic event occurs, endovascular thrombolysis should probably be indicated. The success of this procedure in preserving renal function is partially dependent on the duration of renal artery occlusion, varying from 3 to 72 h according to the literature[19]. In other conditions, especially if thrombosis occlusion occurs in previously damaged arteries the frequent presence of collateralization renders revascularization void[20].

In conclusion, renal arterial thrombosis is a possible risk of infliximab treatment. Clinicians should be aware of this unusual and challenging condition.

We are grateful to Nikki Sabourin-Gibbs, Rouen University Hospital, for her help in editing the manuscript.