An 86-year-old man, diagnosed as having mycosis fungoides in May 2008 and treated with repeated radiation therapy, was admitted to our hospital for initiation of hemodialysis due to end-stage renal disease (ESRD) in April 2012. On admission, his corrected serum calcium level was 9.3 mg/dL, and his intact parathyroid hormone level was 121.9 pg/mL (normal range 13.9-78.5 pg/mL), indicating secondary hyperparathyroidism due to ESRD. After starting hemodialysis, urinary volume diminished rapidly. The serum calcium level increased (12.7 mg/dL), and the intact parathyroid hormone level was suppressed (< 5 pg/mL), while the 1,25-dihydroxyvitamin D3 (calcitriol) level increased (114 pg/mL, normal range: 20.0-60.0 pg/mL) in June 2012. The possibilities of sarcoidosis and tuberculosis were ruled out. Skin biopsies from tumorous lesions revealed a diagnosis of granulomatous mycosis fungoides. The serum soluble interleukin-2 receptor levels and the degrees of skin lesions went in parallel with the increased serum calcium and calcitriol levels. Therefore, the patient was diagnosed as having calcitriol-induced hypercalcemia possibly associated with granulomatous mycosis fungoides. Granulomatous mycosis fungoides is rare, and its association with calcitriol-induced hypercalcemia has not been reported. Careful attention to calcium metabolism is needed in patients with granulomatous mycosis fungoides, especially in patients with ESRD.

An 86-year-old man was admitted to our hospital to start hemodialysis due to ESRD and treatment for cellulitis of the left forearm in April 2012. He was diagnosed as having stage II mycosis fungoides by dermatologists in our hospital in May 2008. Although there were typical histopathological features of mycosis fungoides, including an infiltrate of atypical medium-sized CD4+ T cells with epidermotropism, no histiocytic infiltrate or granuloma formation was found at that time. The skin lesions were repeatedly treated with topical corticosteroid therapy and narrow-band ultraviolet B irradiation. In November 2008, his serum creatinine (Cr) was 1.17 mg/dL, and his urinalysis showed positive urinary protein (3.3 g/d) with hematuria. A renal biopsy could not be performed, because abdominal computed tomography revealed that both kidneys were already atrophic. His renal function deteriorated gradually, and he complained of general fatigue and exertional dyspnea due to uremia in April 2012. Mycosis fungoides progressed to stage III, and he developed cutaneous tumors on his head, neck, and hip despite repeated irradiation.

Hemodialysis was started after admission, and his general condition improved to good in a few days. Although cellulitis recurred and developed to bacteremia, it was also cured by adequate intravenous antibiotic therapy. However, the skin lesions of mycosis fungoides deteriorated progressively. The patient’s clinical course is shown in Figure 1. His corrected serum calcium levels were 8.8-10.1 mg/dL up to May 2011 (data not shown). Hypercalcemia was found in July 2011 (corrected serum calcium: 11.5 mg/dL). However, serum calcium levels decreased with irradiation therapy in parallel with suppression of disease activity of mycosis fungoides. After hemodialysis was started, urinary volume decreased rapidly, and the serum calcium levels increased without administration of vitamin D3 or calcium products. On day 20, the serum calcitriol level was 114 pg/mL, the parathyroid hormone-related protein (PTHrP) level was less than 1.0 pmol/L, and the i-PTH level decreased to less than 5 pg/mL. Therefore, his hypercalcemia was considered to be due to overproduction of calcitriol. 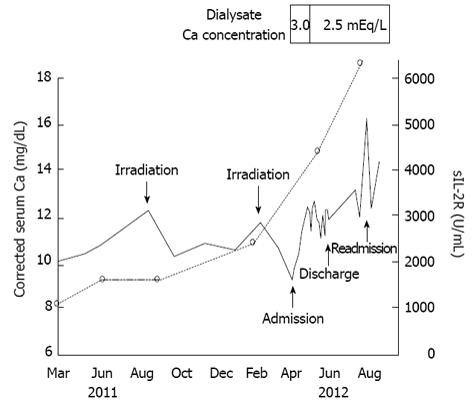 The cause of calcitriol overproduction was investigated. Interferon gamma release assays were negative, and angiotensin converting enzyme was 10.7 IU/L (normal range, 8.3-21.4 IU/L). Bilateral hilar lymphadenopathy was not seen on chest X-ray. Thoracoabdominal computed tomography did not show any lymphadenopathy or abnormal masses. Ophthalmological examination did not reveal uveitis. Taken together, tuberculosis and sarcoidosis were excluded. Gallium scintigraphy demonstrated mild accumulations in the head, neck, and buttocks, confined to the tumor regions of mycosis fungoides.

To address the possible mechanism underlying the granuloma formation related to hypercalcemia, skin biopsies were performed from tumor regions of mycosis fungoides on his neck, abdomen, and waist. Histological examination revealed clusters of atypical lymphocytes forming Pautrier microabscesses within the epidermis and diffuse and dense, small to medium-sized atypical lymphocytes with hyperchromatic and convoluted nuclei throughout the whole dermis. Epidermotropism of lymphocytes was found (Figure 2A). Granuloma formation with aggregation of histiocytes was found, and multinucleated histiocytic giant cells were present (Figure 2B). Immunohistochemistry showed that the majority of the atypical lymphocytes was positive for CD4 and negative for CD7. In addition to foreign body granuloma around invaded hair follicles, granulomatous infiltration consisting of CD68+ epithelioid histiocytes was observed in the deep dermis (Figure 2C). These features were compatible with granulomatous mycosis fungoides.

Figure 2 Microphotographs of skin biopsy specimens. A: There are clusters of atypical lymphocytes that form a Pautrier microabscess (arrow) within the epidermis and diffuse and dense small to medium-sized atypical lymphocytes with hyperchromatic and convoluted nuclei throughout the whole dermis. Epidermotropism of lymphocytes (arrow head) is seen. (Original magnification: × 400. Periodic acid-Schiff staining); B: Granuloma formation with aggregation of histiocytes is seen, and multinucleated histiocytic giant cells are present. (Original magnification: × 400. Periodic acid-Schiff staining); C: Granulomatous infiltration consisting of CD68+ epithelioid histiocytes is observed in the deep dermis. (Original magnification: × 400. Mouse monoclonal anti-human CD68 antibody (DAKO, Tokyo, Japan) was used for detection of CD68.)

The patient was not given oral corticosteroid therapy for the hypercalcemia, because he presented with repeated cellulitis and bacteremia during hospitalization, and he was considered a compromised host due to mycosis fungoides and ESRD. His serum calcium levels increased gradually and reached 12.7 mg/dL on day 30. However, change of the dialysate calcium concentration from 3.0 to 2.5 mEq/L decreased serum calcium levels to around 11 mg/dL (Figure 1). The patient was discharged from our hospital in June 2012 after being given guidance regarding avoidance of exposure to sunlight and excessive calcium intake. Continued irradiation therapy was determined by dermatologists in our hospital, because his clinical course showed that irradiation therapy was effective to control his serum calcium levels (Figure 1). Two months later, he was readmitted to our hospital for irradiation therapy. His serum calcium level (16.3 mg/dL) and calcitriol level (129 pg/mL) increased further. Unfortunately, he deteriorated to a vegetative state due to an acute subdural hematoma caused by a bruise to the head on day 3 after the second hospitalization. The patient was transferred to another hospital in September 2012.

Mycosis fungoides is a rare form of non-Hodgkin lymphoma, classified as cutaneous T-cell lymphoma[1,2]. The estimated annual incidence rates of mycosis fungoides are approximately 0.36 and 0.64 per 100000 in Europe and the United States, respectively[8,9]. Although it is rare, non-Hodgkin lymphoma causes hypercalcemia (approximately 1.0%)[3]. One-third of these cases is associated with overproduction of calcitriol[4], and the origin of the elevated serum calcitriol in these cases is uncontrolled endogenous production of calcitriol, through 1α-hydroxylase, by malignant lymphocytes[10] and macrophages[11], or both.

Several facts provide evidence for the association between hypercalcemia and mycosis fungoides in this case. First, it has been reported that the incidence of hypercalcemia in non-Hodgkin lymphoma correlates with histological grade, and the incidence of hypercalcemia is only 1%-2% in the low-grade group, whereas it is as high as 30% in the high- and intermediate-grade groups[14,15]. The elevation of serum calcium levels correlates with the histological grade and the degree of host macrophage infiltration into lymphomatous tissue[4]. Goteri et al[16] reviewed cases of biopsy-proven mycosis fungoides and classified their histological features into 4 grades based on the quantity and distribution of infiltrating cells. According to the classification, in the present case, the highest grade was present and may have been correlated with hypercalcemia. Next, after hemodialysis was started, hypercalcemia became marked with decreased urinary volume. Hypercalcemia is not evident as long as renal function is intact, because calcium can be excreted into the urine. In fact, it is reported that 17% of patients who presented with non-Hodgkin lymphoma had hypercalciuria, even though no patients showed overt hypercalcemia[17]. They indicate that it is possible that renal function deterioration to ESRD contributed to hypercalcemia in the present case.

The authors would like to thank all of the staff at the Department of Dermatology in Hamamatsu University School of Medicine for their cooperation in diagnosing the patient with granulomatous mycosis fungoides.