AIM: To determine survival parameters as well as characteristics of patients with this syndrome.

METHODS: The investigation was conducted over a period of eight years, as a prospective, non-randomized, clinical study which included 204 patients, treated by chronic hemodialysis. Most patients received hemodialysis 12 h per week. As vascular access for hemodialysis all subjects had an arteriovenous fistulae. Based on surveys the respondents were divided into groups of patients with and without digital hypoperfusion ischemic syndrome. Gender, demographic and anthropometric characteristics, together with comorbidity and certain habits, were recorded. During this period 34.8% patients died.

CONCLUSION: Survival was significantly longer in the patients without digital hypoperfusion ischemic syndrome.

Digital hypoperfusion ischemic syndrome (DHIS) refers to hand ischemia due to peripheral hypoperfusion, induced by an arteriovenous fistula (AVF) for hemodialysis (HD). Its older name, arterial steal syndrome, is less accurate, because most patients with vascular access, have clinically silent arterial steal due to retrograde flow. The etiology of DHIS is a combination of true steal from the distal arteries, arterial stenosis of the arm and distal arteriopathy. Patients commonly present with a cold hand, numbness and hand pain on and/or off dialysis. In advanced cases, there may be ischemic ulcers and dry gangrene[1-3].

Clinically significant distal extremity ischemia occurs in 1.6%-8% of all individuals with a functioning access[4,5]. Due to the increasing age of patients on HD, as well as the rising number of comorbidities, the incidence of hand ischemia is becoming more common. A prerequisite for the occurrence of hand ischemia is reduced blood flow through the arterial system, excessive blood flow through distended blood vessels, inadequate vascular adaptation and reduced collateral perfusion. It is assumed that the incidence of ischemia could rise in the future due to popularization of vascular access in the proximal region of the elbow and the growing number of elderly people on dialysis[6,7].

The goal of this study was to determine clinical characteristics and survival parameters in patients with DHIS.

The investigation was conducted at the Clinic of Urology and Nephrology, Clinical Center, Kragujevac, Serbia, over a period of eight years, as a prospective, non-randomized, clinical study. It included 204 patients, 71 (34.8%) women and 133 (65.2%) men, who had been treated by chronic HD for about 4.5 years. Most patients received HD for 12 h per week, using commercially available dialysers (Fresenius Medical Care, Bad Homburg, Germany, and Gambro AB, Lund, Sweden) providing bicarbonate HD and hemodiafiltration (HDF). The range of the blood pump during dialysis was 250-320 mL/min giving a dialysis fluid flow of 500 mL/min. As vascular access for HD all subjects had an AVF. During this period, 71 (34.8%) patients died.

All patients responded to the questionnaire, which revealed clinical symptoms for DHIS, namely, a positive response to the questions: Do you feel cold or numbness of the hand with the AVF and do you feel pain during or after dialysis treatment? This was defined as the existence of DHIS[7,8].

Age, sex, length of time spent on HD (mo), erythropoietin therapy, oxygen saturation determined for the arm with the AVF and the contralateral side, and the presence of various forms of cardiovascular disease and/or diabetes mellitus were recorded for all participants. Dialysis procedure is defined as bicarbonate and hemodiafiltration. Adequacy of HD was calculated by the urea kinetic model (Kt/V), according to the formula of Daugirdas[9]. Body mass index was calculated using the formula: the ratio between body weight in kg and the square of body height in square meters. Flow through the AVF (mL/L) was measured by Doppler ultrasound examination on a LOGIQ P5 apparatus with a camera (GE Healthcare, 9900 Innovation Drive, Wauwatosa, WI, United States 53226). We also examined the use of alcohol and smoking habits (former and current smokers).

The protocol was approved by the Ethics Committee of the Clinical Center, Kragujevac, Serbia and informed consent was obtained from all the patients, according to the Helsinki declaration.

Digital hypoperfusion ischemic syndrome was confirmed in the most part of our patients. Patients with symptoms of distal ischemia were significantly older, the average length of dialysis treatment is longer, have higher rates of cardiovascular disease and diabetic nephropathy, and blood flow through the arteriovenous fistula is higher compared to those without the syndrome. It was also found that there is a statistical difference in relation to oxygen saturation (Table 1). 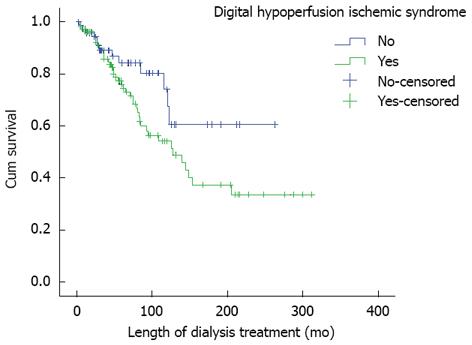 Predictive parameters for the survival of patients with DHIS are: Kt/V index, smokers, diabetes mellitus, erythropoietin therapy and HDF, as well as mode of dialysis (Table 2).

In order to prevent the occurrence of DHIS, identification of risk factors is very important. However, one problem is the absence of a simple and practical classification of this syndrome and objective indicators of distal ischemia, which is the main reason why such a large proportion of our patients showed clinical symptoms of this syndrome[8]. It is practically impossible to predict the occurrence of distal hypoperfusion in the preoperative period, but the likelihood of it developing has been related to a number of risk factors, which primarily include old age, female sex and conditions that lead to arterial occlusion[10]. Women, in the our research, have no higher risk for developing distal hypoperfusion, probably because they accounted for only one-third of our respondents. On the other hand, patients who had symptoms of distal ischemia were significantly older than those without this syndrome, which confirms old age as a factor that characterizes patients with DHIS[6,11]. Half of our respondents were smokers and this habit has been established as a significant feature in patients with pronounced symptoms of distal ischemia. We confirmed this trend for greater incidence of diabetes mellitus and more smokers among the patients with DHIS[2].

Hemodynamic impact on the development of distal ischemia

We have found that the patients differed significantly in relation to oxygen saturation on the hand with the AVF and the contralateral hand. On the other hand, atherosclerotic disease, caused by insufficient collateral perfusion, reduce the flow through the AVF in our patients with DHIS. Because, in the literature is known, that the low vascular resistance in fistulated veins, and arterial stenosis, in the proximal parts, encourages arm ischemia, and reduces blood flow in distal parts of the vascular bed[12-14]. An AVF can cause significant local and general changes in the bloodstream. In fact, retrograde flow in the radial artery occurs in more than 70% of patients with AVF, which, however, does not cause ischemia in subjects with normal blood circulation[15]. Ischemic syndrome in physiological conditions results from a fall in blood pressure in the periphery and failure of compensatory vasodilatation[16].

Heart failure in HD patients has a multifactorial character[14,17-19]. We found an important trend concerning the incidence of cardiovascular disease in the patients with DHIS, most likely due to expressed atherogenesis in the HD patients. Longer survival of the patients treated by HDF was probably due to increased clearance of small and medium-sized molecules, which improved hemodynamic stability[20-23]. Any improvement of the biocompatibility of dialysis systems will reduce their inflammatory character and eventually be reflected by a lower atherogenic profile in patients on HD.

In addition to arterial insufficiency, arm pain may be due to carpal tunnel syndrome and various forms of tendopathy and arthropathy, which can occur in patients on chronic HD. Moreover, pain in the hand after creation of vascular access may be described as so-called. Reflex sympathetic dystrophic syndrome, characterized by pain and swelling of the extremities. Patients with diabetes mellitus often feel neurogenic pain, which is symmetric and includes both extremities. This situation should be distinguished from so-called ischemic neuropathy as a complication of vascular access in diabetic patients, especially those who already have pronounced neuropathic changes characterized by acute pain, muscle weakness and paralysis of arms at rest, as a consequence of somatic-sensory disorders[2,24-27]. Such a differential-diagnostic dilemma for the subjective assessment of distal ischemia is a limiting factor in our study, making it difficult to place our respondents in research sub-categories. We were also unable to establish a time sequence between the outcome of the examined patients and the time of appearance of symptoms of distal ischemia.

In the our respondents with DHIS we have found significant number of the atherogenic factors risk. Consequently, in the every patient with DHIS needs a thorough evaluation of extremity anatomy and access hemodynamics, because one of the causes of DHIS is pathology within the arterial inflow to the arteriovenous fistula[1]. Due to a lack of adequate compensatory flow to the extremity to accommodate both the low-resistance outflow of the access and the high-resistance vascular bed of the distal party can predispose patients to DHIS. Access flow is determined by the interaction of the resistances associated with the access outflow, distal vascular bed, and collaterals[28,29]. Also, diabetic neuropathy may play a role in a predilection for significant ischemic symptoms, particularly with pain and motor that dysfunction that are often seen in patients with significant symptoms of the ischemia[1].

Digital hypoperfusion ischemic syndrome is ischemia due to peripheral hypoperfusion, induced by an arteriovenous fistula for hemodialysis. Manifested by a cold hand, numbness and hand pain on and/or off dialysis, and can contribute to the development dry gangrene of the hand.

In the research areas of this topic is very important serious complications, in the patients with distal ischemia, that may arise if not timely disclose.

The application of these findings will contribute to improving the quality of life in hemodialysis patients.

The absence of a simple and practical classification of this syndrome is the main reason for dilemma relating to the the clinical picture distal ischemia.

This is study in which analyzed complications as is distal ischemia, as one important cause, rare but very serious complication in the hemodialysis population. Progression of these symptoms can lead to gangrene. It is assumed that, in the future, the incidence of ischemia could rise due to popularization of vascular access in the proximal region of the elbow, and the growing number of elderly people on dialysis.