BA.2 is a novel omicron offshoot of severe acute respiratory syndrome coronavirus 2 (SARS-CoV-2) that has gone viral. There is limited knowledge regarding this variant of concern. Current evidence suggests that this variant is more contagious but less severe than previous SARS-CoV-2 variants. However, there is concern regarding the virus mutations that could influence pathogenicity, transmissibility, and immune evasion.

Core Tip: BA.2 is novel omicron offshoot that goes viral. There is limit knowledge regarding this variant of concern. Current evidence suggested this variant is more contagious but less severe than previous severe acute respiratory syndrome coronavirus 2 previous variants. However, there is concern regarding the virus mutations that could be influenced pathogenicity, transmissibility as well as immune evasion.

TO THE EDITOR
The proliferation of omicron (B.1.1.529) and its global dissemination

On November 25, 2021, 22 patients in Gauteng province, South Africa, were diagnosed with atypical pneumonia caused by severe acute respiratory syndrome coronavirus 2 (SARS-CoV-2). Afterward, the Technical Advisory Group of the World Health Organization (WHO) designated the novel SARS-CoV-2 variant as B.1.1.529[1]. Omicron has been identified as the fifth variant of concern (VOCs); the B.1.1.529 genome contains over 50 mutations that increase transmissibility, infectivity, immune system evasion, and vaccine inefficacy[2].

In late November 2021, the South African National Institute of Communicable Diseases reported a 22.4% increase in infections with this variant in a single day[1]. Based on a retrospective study conducted in South Africa, the VOC omicron significantly increased the risk of reinfection (× 2.39) compared to the beta and delta variants, indicating that this variant has a higher potential to evade the immune system[3]. Belgium, Hong Kong, Israel, Germany, the Netherlands, and the United Kingdom reported the detection of the omicron variant shortly after.

On November 27, 2021 due to the omicron variant’s spread to more than 50 countries, the United States and Australia banned all transportation to those countries. However, on November 29, 2021 the first omicron case in Australia was identified in a traveler who traveled to Johannesburg, South Africa (https://www.abc.net.au/news/2021-11-29/nt-covid-outbreakkatherine-traveller-positive-for-omicron/100657690). Subsequently, the VOC omicron was identified in populations that were unvaccinated, partially or fully vaccinated, and immune to previous natural infection.

According to the WHO classification, the omicron variant has three to four subvariants, namely BA.1, BA.1.1, BA.2, and BA.3; nucleotide sequencing analysis revealed that BA.1, BA.1.1, BA.2, and BA.3 subvariants possess 39, 40, 31, and 34 mutations, respectively. All three subvariants evolved simultaneously in South Africa[4] (Figure 1). According to the hypothesis of Gao et al[5], omicron subvariants have emerged in the unvaccinated African population with compromised immune systems. Immunocompromised individuals are unable to fight SARS-CoV-2 infection effectively, and they have the best opportunity for multiplication, mutagenesis, and the emergence of new surge variants. Furthermore, animals can act as reservoirs for the evolution of novel variants. Nonetheless, there has been an increase in cases of BA.2 in recent days, to the point where the BA.2 variant is now the most common SARS-CoV-2 variant in most European countries. 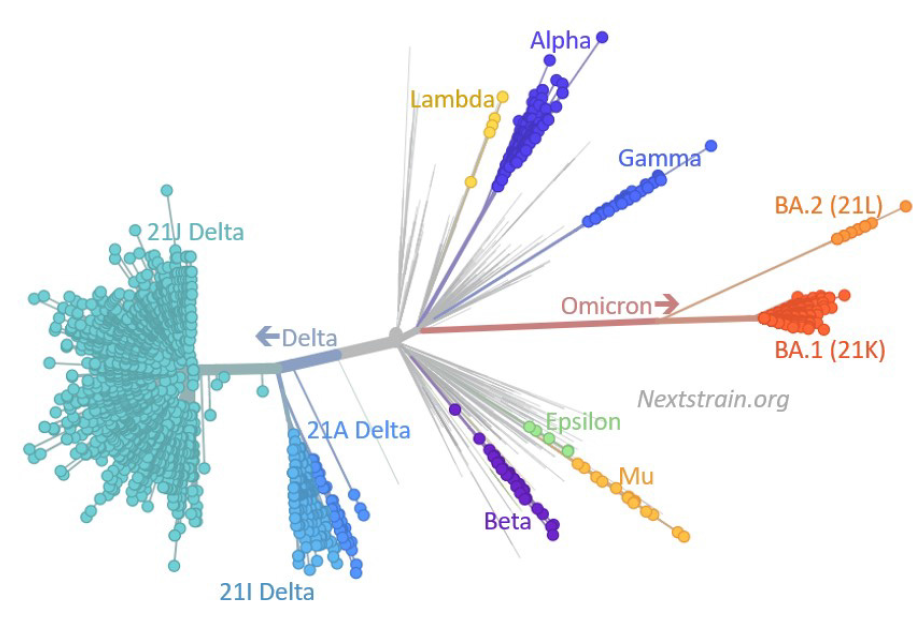 BA.2 is also known as the “stealth variant” because it lacks a deletion signature at positions 69-70 that was not detected by the spike (S) gene target failure assay; therefore, BA.2 was underestimated with the current reverse transcription polymerase chain reaction setup, and its detection is only possible via whole genome sequencing[6,7]. According to viral genome sequences uploaded to the global GISAID database, the United Kingdom, the United States, Denmark, Germany, and Canada are the five countries with the highest prevalence of BA.2 (https://www.gisaid.org/). By February 18, 2022, BA.2 was reported in 153 countries (https://www.gisaid.org).

The VOC BA.2 is a highly contagious subvariant

Figure 2 Global distribution of the BA.2 omicron subvariant in various countries/territories. Available from: https://gisaid.org/hcov19-variants/. A: According to GISAID databases, BA.2 is reported in more than 150 countries; B: The recent trend of BA.2 nucleotide sequence submission.

Lyngse et al[9] demonstrated that the BA.2 subvariant was able to infect unvaccinated individuals (odds ratio = 2.19; 95% confidence interval: 1.58-3.14) and individuals vaccinated with a third booster (odds ratio = 2.99; 95% confidence interval: 2.11-4.20). According to the Danish Staten’s Serum Institute, BA.2 is approximately 1.5 and 4.2 times more contagious than BA.1 and the delta variant[9,10]. Yu et al[11] observed that the neutralizing antibody titer against BA.1 and BA.2 is 23-fold and 27-fold lower than that of WA1/2020. According to their research, the mean neutralizing antibody titers after the third booster of the BNT162b2 mRNA vaccine were approximately 1.4-fold lower than BA.1, indicating the capacity of BA.2 to confer neutralizing antibodies and evade humoral immunity[11].

Chen and Wei[10] hypothesized that BA.2 mutations caused the ability of the immune evasion to be approximately 30% and 17-fold greater than that of BA.1 and the delta variants, respectively, and resistant to most monoclonal antibodies except for sotrovimab. Evidently, BA.2 will quickly become the next dominant global variant. In addition, the United Kingdom Health Security Agency (UKHSA) cautioned that contact tracing data from the United Kingdom estimates that BA.2 is more likely to infect household contacts than BA.1 (10.3%). UKHSA estimated that the increase in the number of BA.2 patients after a third booster dose vaccination was more significant than that of BA.1-infected population (63% for BA.1 vs 70% for BA.2)[12]. According to Covglobe data, the incidence of BA.2 infections has been on the rise since October 2021 and has recently supplanted the VOC B.1.1.529; according to existing databases, BA.2 typically affects younger age groups (Figure 3).

According to Nextstrain online server data, the omicron variant comprises three distinct branches: 21K (or Pangolin lineage12 BA.1), 21L (or BA.2), and BA.3 of the 21M omicron clade[4] (Figure 4). The BA.2 genome contains 20 shared and 6 unique mutations in the S protein compared to B.1.1.529 (archetypical) variant. BA.2 has significantly more mutations than BA1; most of these mutations are non-synonymous. By analyzing and comparing the genomes of BA.1 and BA.2, Wiegand et al[13] observed that BA.2 possesses the most genetic variation in the S protein (24-35 mutations, mean = 30.7) and that the effect of these mutations on virulence, viral transmission, and immune evasion has been identified in previous research. After the S protein, the nucleoprotein has the most genetic changes, but the majority of these changes are non-synonymous, affecting the sensitivity and specificity of diagnostic methods[13]. According to the CoronaTrend online server, the S, nsp6, and M proteins exhibited the most BA.2 mutations (Figure 5).

Figure 4 Comparison between the BA.1 and BA.2 omicron subvariant genomes. Available from: https://covdb.stanford.edu/page/mutation-viewer/#omicron. 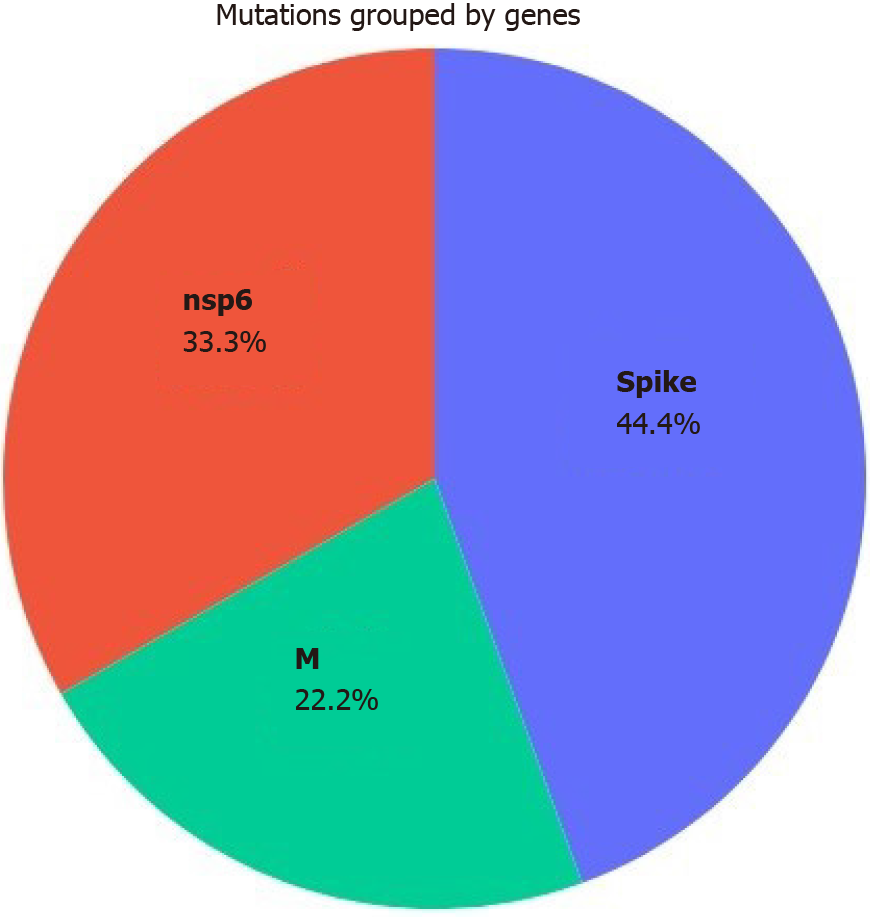 Desingu and Nagarajan[14] deduced that the BA.2 subvariant consisted of five distinct phylogenetically based original geographic regions, namely Sweden/Denmark, Philippines, Hong Kong, India, and China. They demonstrated that each of these clades exhibited unique mutations, such as the H78Y mutation in Denmark, the substitutions of ORF1a: A2909V and ORF3a: L140F in isolates from the Philippines and Hong Kong, and ORF1a: -3677L, ORF1b: S959P, and ORF7b: H42Y in the Indian subgroup. Each distinct mutation in the subpopulations modified the characteristics of BA.2 in terms of viral transmission, infectivity, disease severity, vaccine efficacy, and clinical outcomes in different geographic regions[14,15]. Recent studies suggest that mutations of P681H, H655Y, and N679K at the furin cleavage site increase the replication of omicron variants and as a result the transmissibility of omicron subvariants[4].

Vaccination against the BA.2 omicron subvariant

The 21L/BA.2 omicron variant has become predominant even after the third dose of the Pfizer-BioNTech vaccine, according to reports from Denmark (www.news-medical.net/news/20220214/First-survey-on-Omicron-BA2-in-France.aspx). Moreover, on January 26, 2022, Tyra Grove Krause stated, “There is some evidence that it is more contagious, particularly among the unvaccinated, but it can also infect vaccinated individuals to a greater extent” (https://www.gavi.org/vaccineswork/stealth-omicron-everything-you-need-know-about-new-ba2-subvariant-coronavirus).

Despite the recent increase in BA.2 cases, the WHO has not yet given BA.2 a special designation. However, on January 21, 2022 the UKHSA designated BA.2 as a “variant under investigation” (https://www.gavi.org/vaccineswork/stealth-omicron-everything-you-need-know-about-new-ba2-subvariant-coronavirus). The WHO official Dr. Maria Van Kerkhove stated that BA.2 is significantly more contagious than BA.1 (https://www.cnbc.com/2022/02/08/who-says-omicron-bapoint2-subvariant-will-rise-globally.html); nonetheless, preliminary studies indicate that there is no difference between BA.2 and BA.1 in terms of hospitalization risk.

The remarkable increase in BA.2 infection cases and the rapidity with which it has spread in a short period of time is perplexing. In addition, intensive care unit admissions and mortality rates are rising, causing worldwide concern in healthcare facilities. According to the Infectious Diseases Society of America, the most effective treatments for SARS-CoV-2 B1.1.529 are monoclonal antibodies such as sotrovimab, evusheld, convalescent sera, and Oxford-AstraZeneca and Pfizer-BioNTech vaccines (https://www.idsociety.org/covid-19-real-time-learning-network/emerging-variants/emerging-covid-19-variants/#). Hand hygiene, physical distance, mask use, and mass vaccination, particularly a third booster dose, are recommended countermeasures to control the global spread of the BA.2 variant, as is the consideration of nationwide lockdowns.