For transplant surgeons, end-stage liver disease with portal venous thrombosis and a previous splenorenal shunt (SRS) is a significant challenge during liver transplantation. Thrombosis of the portal vein can be corrected by surgical interventions, such as portal venous thrombectomy or surgical removal of the thrombosed portal vein. Even also placement of a graft between the mesenteric vein and the graft portal vein can be performed. If these maneuvers fail, a renoportal anastomosis (RPA) can be performed to achieve adequate graft inflow. A 51-year-old male patient who had a history of proximal SRS and splenectomy underwent living donor liver transplantation (LDLT) due to cryptogenic cirrhosis. LDLT was performed with RPA using a cadaveric iliac vein graft. The early postoperative course of the patient was completely uneventful and he was discharged 20 d after transplantation. To the best of our knowledge, this was the first patient to receive LDLT with RPA after surgical proximal SRS and splenectomy.

Core tip: Renoportal anastomosis is such a feasible option during liver transplantation especially for patients having portal vein thrombosis. This case has a history of surgical proximal splenorenal shunting and splenectomy before liver transplantation which is a rare condition that makes surgery more complex and difficult. We reported how we managed our patient.

End-stage liver disease with portal venous thrombosis (PVT) and previous splenorenal shunt (SRS) presents significant challenges during liver transplantation[1]. The incidence of PVT was reported as 10% to 25% in patients with cirrhotic end-stage liver disease[2]. At different centers, the native PVT rate was between 2.1% and 26%[3]. PVT was as an absolute contraindication at the beginning of the liver transplantation era; nevertheless, adequate portal inflow during liver transplantation could be achieved by innovations in surgical techniques. Portal vein thrombosis can be corrected by surgical interventions, such as portal venous thrombectomy or surgical removal of the thrombosed portal vein. Even though bridging the mesenteric vein and the graft portal vein by placement of a vascular graft can be performed in order to maintain graft inflow[4]. In such cases, renoportal anastomosis (RPA) can also be performed in order to achieve adequate graft inflow. Sheil and colleagues were the first to describe this technique, and Kato et al[5] modified it for patients receiving orthotopic liver transplantation who had distal SRS[6]. We describe a case of successful living donor liver transplantation with RPA for a patient who had undergone proximal SRS and splenectomy 20 years ago.

A 51-year-old male with decompensated liver disease was admitted for liver transplantation. His viral hepatitis markers, including hepatitis B and C, were negative. He was also investigated for immune-mediated hepatic disorders; there was no positive test result and he was diagnosed as cryptogenic cirrhosis. He had a history of bleeding esophageal varices that were treated by endoscopic band ligation and also he had a history of proximal SRS and splenectomy from 20 years before. His Child-Pugh score was 11 (Grade C) and model for end-stage liver disease score was 33. Thrombosed portal vein was visualized on abdominal computed tomography and also active SRS draining from the splenic vein into the left renal vein was identified (Figure 1). The portal thrombus continued down to the mesenterico-splenic confluence. We planned to perform a right lobe living donor liver transplantation for him, and his 39-year-old male relative was prepared as a donor with the approval of the ethics committee. In the evaluation of the donor, the remnant liver volume was calculated as 34%. The graft weight was calculated as 580 g. The ratio of graft volume to recipient weight was 0.75. 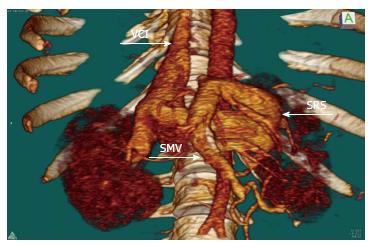 Recipient operation was started with a reverse L incision. There was no blood flow in the recipient’s main portal vein during hilar dissection and we did not observe any bowel congestion. After total hepatectomy, the anterior part of the infrahepatic vena cava was explored and dissected to expose the bifurcation of the left renal vein (Figure 2). The duodenum was mobilized with a minimal Kocher maneuver to minimize bleeding from retroperitoneal collateral veins. We started the implantation of the liver graft with hepatic vein anastomosis, and then performed an end-to-end RPA between the left renal vein and the graft portal vein with 6-0 polypropylene-interrupted sutures using a cadaveric iliac vein as an interposition graft with sufficient forward ﬂow (Figure 3). Finally, hepatic artery and biliary anastomosis were performed. Intraoperative Doppler ultrasound showed normal hepatic arterial, renoportal, and hepatic venous flow. The cold and warm ischemia times were 80 and 30 min. The total operation time and operative blood loss were 636 min and 2.4 L, respectively. The immediate postoperative course of the patient was uneventful. The amount of ascites drainage from abdominal drains decreased daily and we pulled out the drains ten days after liver transplantation. The INR, creatinine, and bilirubin levels of our patient reached normal ranges before they were discharged from the hospital. The computerized tomography scans confirmed the patency of the anastomosis at the 19th postoperative day (Figure 4). Unfortunately, we lost the patient due to biliary leakage and sepsis two months after transplantation. 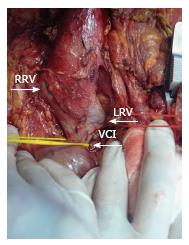 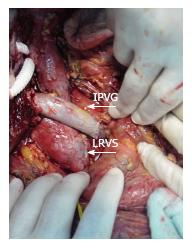 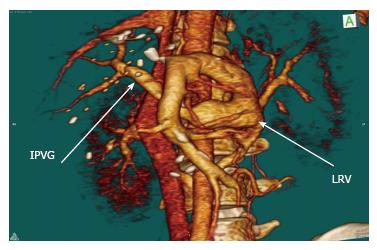 It is critical to ensure adequate portal vein inflow for patients receiving liver transplantation with PVT. Possible surgical portal vein reconstruction strategies can be chosen according to Yerdel’s classification, based on preoperative imaging data or intraoperative findings[7]. For partial (grade 1-2) PVT thrombectomy or thrombendvenectomy may be possible choices during LT[8,9]. On the other hand more complex surgical procedures such as using interposition grafts between the distal superior mesenteric vein and graft portal vein or portal vein arterialization can be performed for complete thrombosis of the portal vein (grade 3-4) in order to restore portal inflow[10-12]. However, patients with extensive PVT frequently have complex spontaneous porto-caval shunts[13]; the shunt vessels should be ligated to prevent this phenomenon. Unfortunately, ligation of these large, fragile shunt vessels is technically difficult and may cause significant bleeding. Two alternative surgical techniques can be used for patients with complete PVT: Cavoportal hemi transposition and RPA[14]. The graft’s portal vein and inferior vena cava is anastomosed in an end-to-end, end-to-side, or side-to-end fashion in cavoportal hemi transposition. Nevertheless, lower limb edema and impaired renal functions due to obstruction of the vena cava are the risks of this surgical procedure.

RPA can be performed between the left renal vein and the graft’s portal vein in an end-to-end or side-to-end fashion, with or without an interposition graft[15,16]. In RPA, adequate portal inflow without the steal phenomenon can be achieved easily in patients with major portosystemic shunts. There is no need for dissection or manipulation around large and fragile shunt vessels while performing RPA, so excessive bleeding can be avoided. We performed RPA in an end-to-end fashion with an interposition cadaveric iliac vein graft. Prosthetic grafts can also be used as interposition grafts, but using prosthetic grafts have some disadvantages because of their thickness and rigidity. Patients with prosthetic grafts must receive aspirin daily to prevent graft thrombosis. Moreover, they have the risk of graft infection due to immunosuppressive drugs.

Patients can develop small-for-size syndrome after RPA due to excessive portal inflow, which is characterized by the production of persistent ascites and prolonged hyperbilirubinemia[17]. Our patient’s postoperative course was uneventful, and we did not observe excessive amount of ascites drainage; our patient’s bilirubin level reached the normal range before they were discharged from the hospital. Congestion of the left kidney may be a problem because the manipulation of the left renal vein may affect the outflow of the left kidney. Lee et al[18] reported that temporary renal impairment can occur after the ligation of the proximal left renal vein in patients with large SRSs. We did not observe any renal impairment in our patient. To the best of our knowledge, our case is the first patient to receive LDLT with RPA after surgical proximal SRS.

PVT during liver transplantation is no longer a relative contraindication with today’s surgical innovations. RPA is a feasible and efficient way to provide adequate inflow for the liver graft, even also in patients with portal vein thrombosis who underwent proximal SRS and splenectomy before.

A 51-year-old male who has the history of proximal splenorenal shunt (SRS) and splenectomy, had intractable ascites due to portal vein thrombosis and end stage liver disease.

He had ascites and bleeding esophageal varices due to end stage liver disease.

His Child-Pugh score was 11 (Grade C) and model for end-stage liver disease score was 33.

Thrombosed portal vein and also active SRS draining from the splenic vein into the left renal vein was visualized on abdominal computed tomography.

The authors performed an end-to-end Renoportal anastomosis between the left renal vein and the graft portal vein with 6-0 polypropylene-interrupted sutures using a cadaveric iliac vein as an interposition graft with sufficient forward ﬂow.

Living-donor liver transplantation with renoportal anastomosis for the treatment of spontaneous splenorenal shunts in patients with end-stage liver disease is a life saving and a safe technique which was described before. The patient is the first case receiving living donor liver transplantation (LDLT) with renoportal anastomosis (RPA) after surgical proximal SRS and splenectomy.

RPA can be performed between the left renal vein and the graft’s portal vein in an end-to-end or side-to-end fashion, with or without an interposition graft.

RPA is a feasible and efficient way to provide adequate inflow for the liver graft, even also in patients with portal vein thrombosis who underwent proximal SRS and splenectomy before.

The case report is the first patient with end-stage liver disease to receive LDLT with RPA after surgical proximal SRS. The clinical experience is very important to treat the similar patients in the future.