To determine the relationship between serum 25 (OH) vitamin D level and biopsy-proven allograft rejection and CAN rate in renal transplant recipients.

Fifty-two recipients who underwent graft biopsy met the inclusion criteria. In all, 14 recipients had a vitamin D level > 15 ng/mL (group 1) vs ≤ 15 ng/mL (group 2) in 38. In total, 27 patients had biopsy-proven rejection, and 19 had CAN. There was only 1 recipient with biopsy-proven rejection in group 1, whereas there were 24 patients with rejection in group 2. The rejection rate was significantly higher in group 2 than in group 1 (P < 0.001). Four patients were diagnosed with CAN in group 1 vs fifteen in group 2. There was no significant difference in the CAN rate between the two groups. PTH was higher at the time of graft biopsy (P = 0.009, P = 0.022) in group 1 with a mean of 268 pg/mL. Donor-specific antibodies were detected in 14 (56.0%) of the recipients with rejection. Vitamin D level was 9.7 ± 3.4 ng/mL in the rejection group vs 14.7 ± 7.2 in the non-rejection group; this difference was statistically significant (P = 0.003). The albumin levels were significantly lower in patients with rejection than in those without rejection (P = 0.001). In univariate regression analysis of risk factors affecting rejection, sex, serum vitamin D, phosphorus and albumin were found to have an impact (P = 0.027, P = 0.007, P = 0.023, P = 0.008). In multivariate regression analysis, the same factors did not affect rejection.

Core Tip: This study analyzed the results of 130 kidney transplant recipients. Of the 52 recipients who underwent graft biopsy and met the study inclusion criteria, 14 had a vitamin D level > 15 ng/mL vs ≤ 15 ng/mL in 38. Although low serum vitamin D level emerged as a risk factor for rejection in univariate analysis, this finding was not confirmed by multivariate analysis. Nonetheless, diagnostic and predictive accuracy is limited when a single test is used, and larger-scale prospective clinical studies are needed to clearly discern the effects of serum vitamin D level on the renal allograft rejection rate.

Kidney transplantation is the best treatment option for patients with terminal kidney failure. Successful transplantation prolongs longevity and significantly improves quality of life. In addition, following kidney transplantation, 75% of recipients return to work, and approximately 1 in 50 females can get pregnant[1]. For recipients to experience these benefits, close follow-up and optimization of modifiable risk factors are crucial. One of the modifiable risk factors is the serum vitamin D level[2].

It is known that 25 (OH) vitamin D plays a significant role in calcium and phosphate balance. Furthermore, a low vitamin D level can have deleterious effects on renal allografts[3,4]. A large prospective clinical study on kidney transplant recipients reported that a low 25 (OH) vitamin D level was associated with a reduced glomerular filtration rate (GFR) at 9 mo post-transplantation[5]. Moreover, vitamin D has a wide range of effects on the immune, renal, and cardiovascular systems[6]. The vitamin D receptor (VDR) is found in almost every immune cell including macrophages, CD4+/CD8+ T lymphocytes, and dendritic cells. VDR induces allograft tolerance by directing naive T lymphocytes to transform into T helper type 2 cells phenotypically; this process is defined as vitamin D-influenced immunomodulation[7].

This single-center retrospective cohort study was performed at the Health Sciences University of Turkey, Diskapi Research and Training Hospital, Department of Nephrology and Transplantation, Ankara, Turkey. All adult renal transplant recipients followed at the transplant clinic between January 2013, and July 2018 were reviewed. Among these patients, recipients requiring allograft biopsy due to progressive graft function decline, new-onset hematuria, and proteinuria were included in the study.

Allograft biopsies were performed as per Kidney Disease Improving Global Outcomes (KDIGO) practice guidelines[11]. Banff 97 criteria were used to evaluate biopsy specimens[12]. Biopsy specimens were considered adequate if they had ≥ 10 glomeruli and two arteries; patients with inadequate biopsy specimens were excluded from the study. Additionally, patients with post-transplant follow-up < 1 year were excluded from the study to establish a homogeneous cohort. The serum vitamin D level was measured every 3 mo, as per the KDIGO clinical practice guideline for the diagnosis, evaluation, prevention, and treatment of chronic kidney disease-mineral and bone disorder. All recipients received vitamin D replacement therapy considering their serum vitamin D levels, as per KDIGO guidelines[13].

Demographic characteristics, medical history, prior type and duration of dialysis, donor type, human leukocyte antigen (HLA) mismatches, maintenance immunosuppression, biopsy results, and serum vitamin D level at the time of graft biopsy were obtained from hospital records by a research nurse. In addition, as this study determined the relationship between serum vitamin D level and allograft biopsy results, other biochemical parameters associated with rejection and CAN, such as the GFR, and serum creatinine, albumin, calcium, phosphate, and parathyroid hormone (PTH) levels at the time of graft biopsy, were also recorded. The study protocol was approved by the hospital’s ethical review committee (06.08.2018-no. 53/20) and was carried out in accordance with the Declaration of Helsinki and the Declaration of Istanbul. All patients provided written informed consent.

Data were analyzed using IBM SPSS Statistics for Windows v.22.0 (IBM Corp., Armonk, NY, United States). The distribution of data was analyzed using the Kolmogorov-Smirnov test. Mean ± SD was used for descriptive analysis of parametric quantitative data, whereas number and percentage were used to analyze the qualitative data. The student’s t-test was used for parametric data analysis, and the Mann-Whitney U test was used for non-parametric data analysis. Pearson’s chi-square test was used to analyze qualitative data. The level of statistical significance was set at P < 0.05. Binary logistic regression analysis was used to determine the independent factors related to rejection. After excluding multicollinear variables, clinically relevant variables and parameters presenting statistical significance were subject to the binary logistic regression analysis. The odds ratios (ORs) with corresponding 95% confidence intervals (CIs) were used to show the factors affecting the outcomes.

Maintenance immunosuppressive regimens at the time of graft biopsy were as follows: 38 (73.4%) patients were on a combination of MMF, tacrolimus, and prednisone, whereas 11 (20.9%) were receiving a combination of MMF, cyclosporine, and prednisone. Only 3 (5.7%) of the recipients used mechanistic target of rapamycin inhibitor-based regimens. At the time of allograft biopsy, the average serum trough calcineurin level was 4.8 ± 0.8, cyclosporine serum level ng/mL was 545 ± 89, and the mean daily intake of MMF was 1.7 ± 0.3 gr/d. Within the study cohort 20 patients were receiving vitamin D treatments according to the KDIGO guidelines. Among the 52 allograft biopsies, 25 (48%) showed rejection. Acute T cell-mediated rejection, acute antibody-mediated rejection (ABMR), and chronic active ABMR were observed in 6 (11.5%), 10 (19.2%), and 9 (17.3%) of the recipients, respectively. CAN was noted in 19 (36.5%) of the recipients. Calcineurin toxicity was observed in 3 (5.8%) patients, whereas BK virus nephropathy and recurrent nephritis were noted in 4 (7.7%) and 1 (1.9%), respectively.

The study population was divided into two groups based on the serum vitamin D level (Table 2). Patients with a vitamin D level > 15 ng/mL constituted group 1, and those with a level ≤ 15 ng/mL constituted group 2. The two groups were compared concerning graft function, HLA mismatches, biochemical parameters, GFR, and rejection status. Group 1 included 14 (27%) patients, and group 2 included 38 (73%). There were no significant differences concerning age, comorbidities, or HLA mismatches between the groups (P > 0.05). Males were predominant in group 2 (P = 0.035). Four (28.6%) recipients in group 1 and 15 (39.5%) recipients in group 2 were diagnosed with CAN. There was no significant difference in the CAN rate between the two groups (P > 0.05). Only 1 (7.1%) recipient was diagnosed with rejection in group 1 and 24 (63.2%) recipients in group 2. The biopsy-proven rejection rate was significantly higher in group 2 compared to group 1 (P < 0.001) (Figure 1). 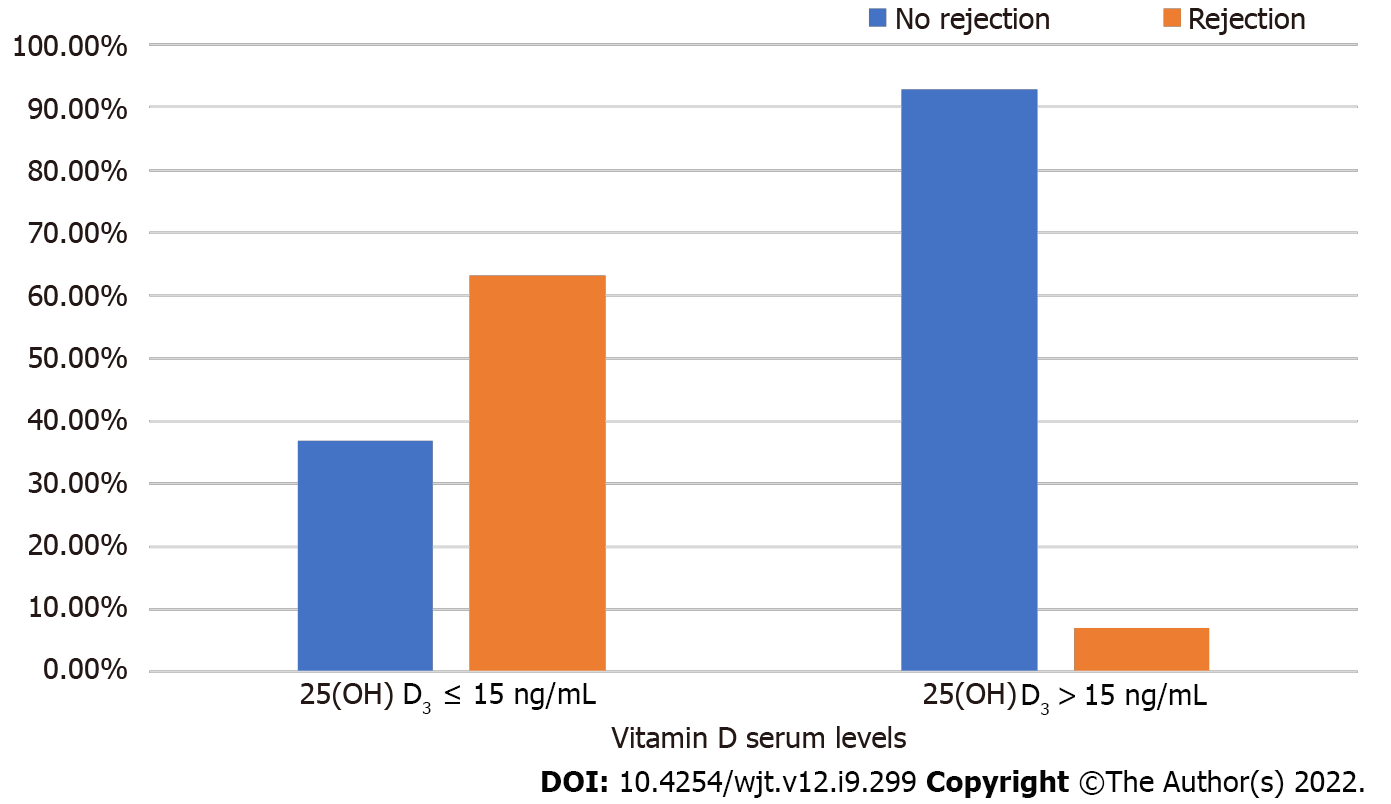 Vitamin D deficiency is associated with glomerular disease in native and transplanted kidneys, and this finding has been attributed to endothelial cell dysfunction. Therefore, it was proposed that a low serum vitamin D level and an elevated fibroblast growth factor-23 level hinder endothelial cell function and lead to endothelial injury[23-25]. Although normal endothelium expresses major histocompatibility complex (MHC) class I antigens only, in endothelial injury and inflammation cases, MHC class II antigens are also expressed on the cell surface. These MHC class II antigens increase the recruitment and adhesion of CD4+ T cells and initiate allorecognition. Alloantigen recognition subsequently triggers the production of inflammatory mediators and activates the complement cascade[26-28]. The present study could not evaluate endothelial dysfunction or MHC class II antigen expression due to its retrospective design; however, a correlation between a low serum vitamin D level and the kidney rejection rate was observed (P < 0.001).

On the other hand, as graft rejection and CAN share some immunological pathways, we suggest that the serum vitamin D level might play a role in CAN risk[29]. To the best of our knowledge, the present study is the first to examine the relationship between vitamin D deficiency and CAN. In the present study, the CAN rate did not differ according to the vitamin D level (P = 0.534).

The present findings indicate that the long-term graft survival rate remains moderate, even with meticulous management of risk factors, including vitamin D replacement. In this study, patients with rejection had higher phosphorus and PTH measurements at the time of graft biopsy (P = 0.009, P = 0.022), and vitamin D and albumin levels were significantly lower in this group (P = 0.003, P = 0.001). Univariate regression analysis elucidated that female sex, serum vitamin D, phosphorus, and albumin were significant risk factors affecting rejection. However, in the multivariate regression analysis, these risk factors did not affect the rejection status (P > 0.05).

The present study had some limitations, including a retrospective single-center design; the retrospective design might have led to selection and recall biases, and its single-center nature precludes generalization of the findings. In addition, the study population was small and might have been insufficient for establishing the existence of cause and effect relations.

In conclusion, the serum 25 (OH) vitamin D level of kidney transplant recipients remained low despite vitamin D replacement recommended by KDIGO guidelines. However, the multivariate regression analysis did not find the same variables effective on rejection. Nonetheless, diagnostic and predictive accuracy is limited when a single test is used, and larger-scale prospective clinical studies are needed to more clearly discern the effects of the serum vitamin D level on the renal allograft rejection rate.

Vitamin D has immunomodulatory effects and vitamin D receptors can be found in various types of cells including T cells and dendritic cells. Its deficiency may predispose transplant recipients to rejection and chronic allograft nephropathy (CAN).

This study determined the association between the serum 25 (OH) vitamin D, biopsy-proven allograft rejection, and CAN rates.

Kidney transplantation is the best treatment option for patients with terminal kidney failure. Successful transplantation prolongs longevity and significantly improves the quality of life. However, the long term success of kidney transplantation depends on preventing the chronic allograft dysfunction. Chronic allograft dysfunction is secondary to various immunological, infectious and drug related insults to the graft. Its prevention depends on close clinical follow-up and optimization of controllable variables, such as serum vitamin D levels.