Acute intermittent porphyria (AIP) is an inherited disorder of porphyrin metabolism with a worldwide distribution and a prevalence ranging from 1 to 9 per million population. AIP is caused by an autosomal dominant-inherited mutation of low penetrance resulting in a deficiency of porphobilinogen deaminase (PBGD) activity. Acute attacks are provoked by stressors such as certain medications, alcohol, and infection. We herein present the first case report of AIP detected in a post-renal transplant patient.

The patient was a 65-year-old man who underwent transplantation 2 years previously for suspected nephroangiosclerosis and chronic interstitial nephro-pathy. He subsequently developed diabetes mellitus which required insulin therapy. He had been treated in the recent past with local mesalamine for proctitis. He presented with classic but common symptoms of AIP including intense abdominal pain, hypertension, and anxiety. He had multiple visits to the emergency room over a 6-mo period for these same symptoms before the diagnosis of AIP was entertained. His urinary postprandial blood glucose level was 60 mg/24 h (normal, < 2 mg/24 h). He was placed on a high carbohydrate diet, and his symptoms slowly improved.

This case report describes a common presentation of an uncommon disease, in which post-transplant complications and medications may have contributed to precipitating the previously undiagnosed AIP. We hypothesize that the low-carbohydrate diet and insulin with which our patient was treated may have led to the attacks of AIP. Alternatively, our patient’s mesalamine treatment for proctitis may have led to an acute AIP crisis. A high index of suspicion is needed to consider the diagnosis of a heme synthesis disorder, which presents with the common symptoms of abdominal pain, high blood pressure, and anxiety.

Core Tip: This case report describes a common presentation of an uncommon disease, in which post-transplant complications and medications may have contributed to precipitating his previously undiagnosed acute intermittent porphyria. A high index of suspicion is needed to consider the diagnosis of a heme synthesis disorder, which presents with the common symptoms of abdominal pain, high blood pressure, and anxiety in a post-renal transplantation patient.

Acute intermittent porphyria (AIP) is an inherited disorder of porphyrin metabolism with a worldwide distribution and a prevalence ranging from 1 to 9 per million population with the highest prevalence found in northern Europe[1]. AIP is caused by an autosomal dominant inherited mutation of low penetrance resulting in a deficiency of porphobilinogen deaminase (PBGD) activity[1]. Acute attacks are provoked by stressors such as certain medications, alcohol, and infection. Symptoms include abdominal pain mimicking acute surgical abdomen, sometimes leading to unnecessary laparotomy, as well as neuromuscular and psychiatric disturbances. Late-stage associated conditions include renal insufficiency and hepatocellular cancer[2,3].

Recurrence of abdominal pain, nausea, and vomiting in a kidney transplant patient.

A 65-year-old man reported the appearance of rectal blood in March 2017 and visited a proctologist. He started local mesalamine therapy for proctitis, but the drug was discontinued a few days later due to abdominal pain and constipation. During the subsequent 6 mo, he presented several times to the emergency department complaining of severe abdominal pain, nausea, and vomiting. He related an anxious mood and low energy level in addition to tachycardia and an increase in blood pressure which was no longer well-controlled with his usual therapy. He presented to the emergency room eight times for various complaints (Figure 1): Epigastric pain without mention of mesalamine, agitation and anxiety, thoracic pain, abdominal pain, and precordial pain. 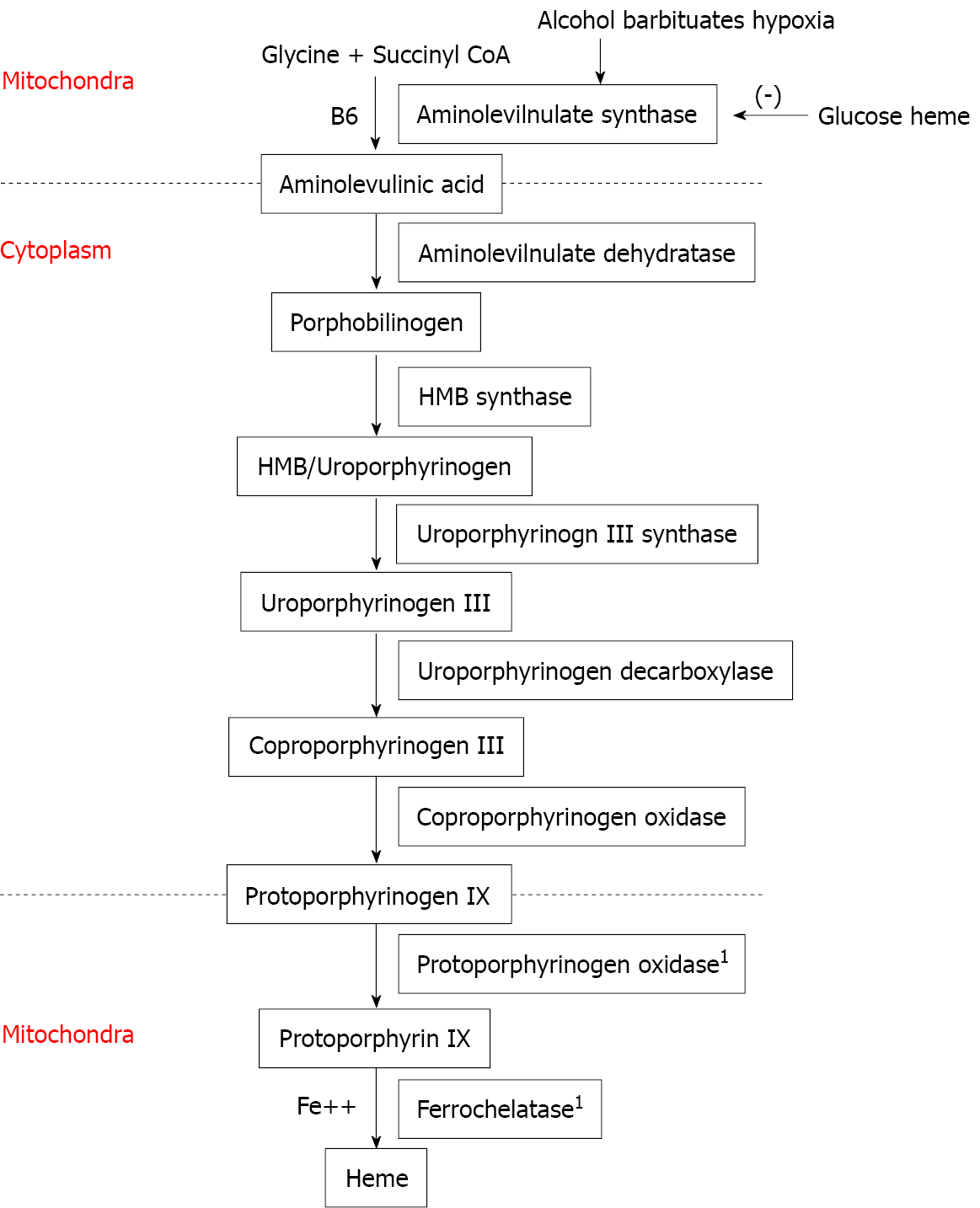 The patient had been treated for hypertension since 1994 and developed ischemic heart disease. His renal function gradually deteriorated over the years due to suspected nephroangiosclerosis and chronic interstitial nephropathy, as ultrasound examination demonstrated small echogenic kidneys. He started hemodialysis in 2008 and was evaluated for renal transplantation; a left nephrectomy was performed for a small incidental renal carcinoma. The histopathologic examination of the nephrectomy specimen revealed angiosclerosis and tubulointerstitial fibrosis. He underwent a deceased-donor kidney transplant in 2015, for which he was treated with tacrolimus, mycophenolate mofetil, and methylprednisolone. He developed diabetes mellitus post-transplant and insulin therapy was initiated (see Table 1).

The patient had no known family history of porphyria.

The patient was hemodynamically stable with a heart rate of 90 bpm and blood pressure of 160/90 mmHg, but appeared in mild distress. The physical examination revealed an intermittently tender, non-distended abdomen with normal bowel sounds and absent rigidity, rebound, and guarding. The remainder of the physical exami-nation was unremarkable.

Serum levels of hemoglobin, electrolytes, hepatic transaminases, amylase, thyroid function, protein electrophoresis, and C-reactive protein were normal, as was the urine analysis. Renal function was stable with a serum creatinine of 1.2 mg/dL; the urine culture was negative.

Plain X-rays of the abdomen showed distended colon and fecal impaction, and ultrasound revealed that the liver, spleen, pancreas, and transplanted kidney were of normal size and consistency and that the site of the left nephrectomy was occupied by intestinal loops.

Based on the clinical symptoms and the radiologic and laboratory findings, a diagnosis of porphyria was attained. The level of postprandial blood glucose (PBG) in a 24-h urine sample was determined utilizing spectrophotometric technique (ClinRep for the porphyrins and ClinEasy for PBG; RECIPE Chemicals and Instruments, Munich, Germany). The level of PBG was significantly elevated to - 60 mg/24 h in the first sample (normal value, < 2 mg/24 h), whereas the values for porphyrins and coproporphyrins were negative, supporting the hypothesis of AIP (Figure 2). 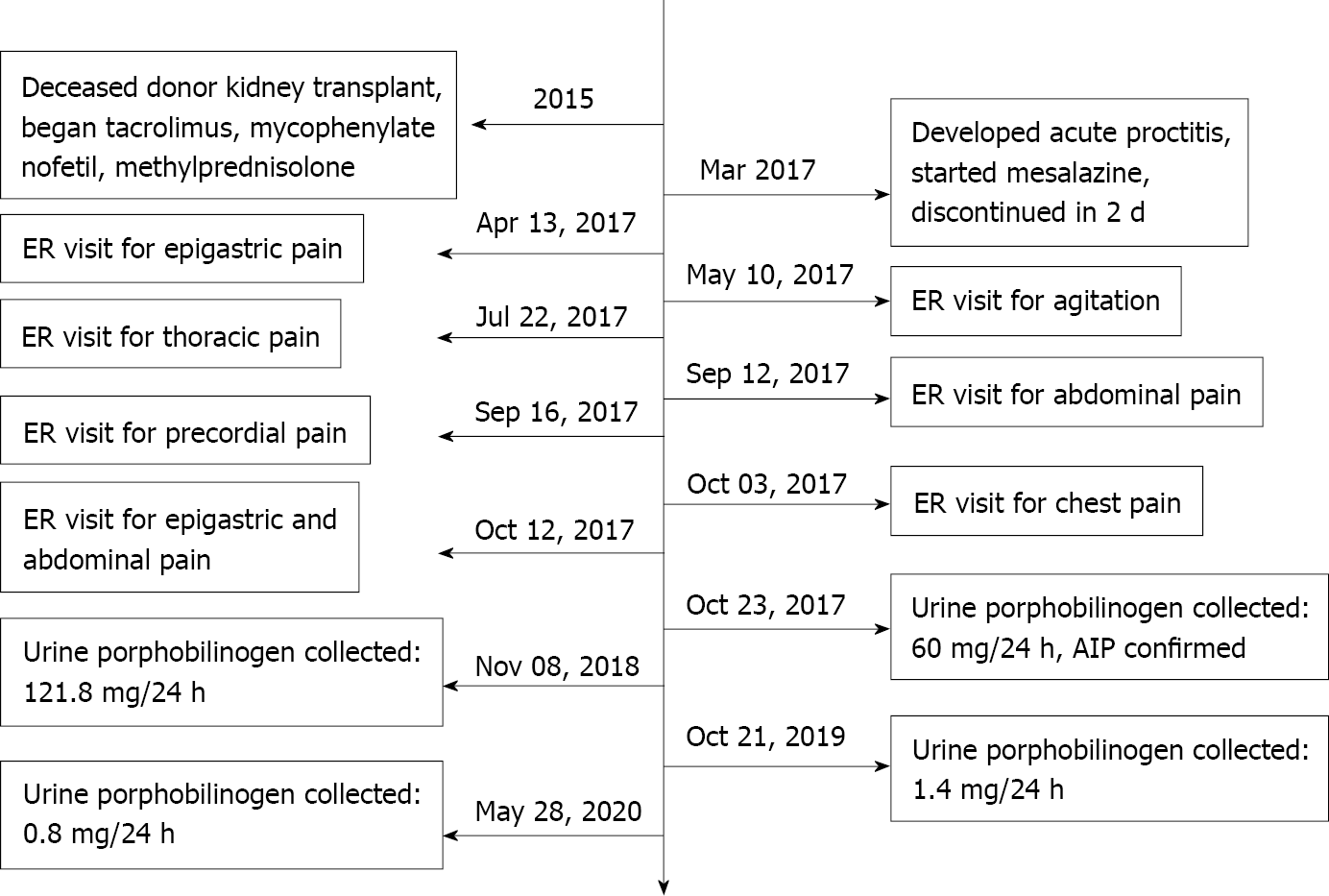 After AIP was confirmed, treatment was initiated with a carbohydrate-rich diet, and the patient's symptoms slowly improved. The timeline of events is listed in Figure 1.

The patient was referred to the genetics division for analysis of the PBGD (also known as the hydroxymethylbilane synthase) gene and also splicing variants using sequencing and polymerase chain reaction amplification, but tested negative for the most common available single nucleotide polymorphisms (SNPs). It is notable that the patient’s insulin requirements did not change after the high-carb diet was started; his insulin doses, glycated hemoglobin, and glucose levels did not change.

The patient's symptoms slowly improved with a carbohydrate-rich diet.

To our knowledge, this is the first report of new onset AIP symptomatology in a renal transplant patient. We hypothesize that our patient had pre-existing but undetected AIP, and that he may have a genetic predisposition due to his European ancestry. Although Lazareth et al[7] have reported improved AIP outcomes following renal transplantation, the hepatic origin of the disease may present a risk of acute attack in case of post-transplant complications, medications, infection, or reduced carbohydrate intake.

As mentioned in the History of Past Illness section, the nephrectomy specimen, in addition to the small renal carcinoma, revealed chronic tubulointerstitial lesions and nephroangiosclerosis. According to Pallet et al[8], in a large cohort of patients with porphyria-associated kidney disease, kidney biopsies revealed “diffuse glomerulosclerosis and chronic interstitial changes”, and thus it is conceivable that the AIP was responsible for the renal insufficiency in the native kidneys. On the other hand, these findings are very common and nonspecific in nephropathy patients, and may not accurately reflect the etiology of the renal disease.

Over 500 PBGD mutations have been described in AIP. Penetrance is incomplete, and less than 10 per cent of individuals with each genetic defect may have phenotypic expression of the disease[9]. The enzyme deficiency alone is not sufficient to trigger crises; environmental factors are required. Thus, 80%-90% of those with the enzyme deficiency never manifest symptoms[10]. Acute attacks are often precipitated by drugs such as barbiturates and other anticonvulsants, calcium channel blockers, sedatives, antibiotics, hormones, alcohol, tobacco, calorie-restricted or low carbohydrate diets, infection, surgery, psychological disorders, or other comorbid conditions. In some patients, no precipitating stressor is found[11].

The diagnosis of acute porphyria is challenging - symptoms are not specific and may mimic various digestive and neuropsychiatric diseases. Very intense, diffuse abdominal pain is often the earliest characteristic symptom. Nausea, vomiting, constipation, urinary retention, arrhythmias, labile blood pressure, and hyponatremia may coincide with the pain[11]. The AIP crisis may also have associated neurological complications such as respiratory arrest due to bulbar involvement, quadriplegia, neuropathic limb pain, depression, and suicide[12]. In the present case, the patient presented with the principal signs and symptoms of AIP: Very intense abdominal pain, hypertension, and anxiety/depression disorder.

The clinical criteria for AIP diagnosis include the paroxysmal nature of the symptoms, while the biochemical criteria include a more than fivefold increase in urinary porphobilinogen excretion, which is also elevated in 88% of AIP patients in remission. DNA analysis of the PBGD gene is the most reliable diagnostic method.

Current treatment options include heme preparations during an acute attack; intravenous glucose 10% alone (see discussion below) - at least 300 g daily - may resolve mild attacks or may be given while waiting for heme arginate to be available. During acute attacks, correction of dehydration and electrolyte imbalances as well as monitoring of vital capacity and expiratory flow rate is important. This patient responded to a high complex carbohydrate diet. No variation of the immunosuppressive protocol has been required.

A high prevalence of AIP among the Spanish population has been reported, and variations on the CYP2D6 enzyme, important for hepatic drug metabolism, in this population may impact the penetrance of this disorder in those with a PBGD enzyme mutation[13]. Additionally, G6PD deficiency is common among Mediterranean populations[14], and the levels of G6PD can affect AIP exacerbations[15]. Although our patient tested negative for the most common SNPs, with over 500 mutations identified affecting the PBGD gene[16]which can cause AIP, it is possible that our patient had a rarer or undescribed mutation.

It is possible that the patient’s diabetes combined with his low carbohydrate intake resulted in low uptake of glucose into the cells, mimicking the fasting state known to trigger AIP attacks[11]. Post-transplant diabetes is commonly induced by tacrolimus treatment through decreased insulin secretion, increased insulin resistance, and beta-islet cell toxicity[19]. A case report of a patient with hereditary coproporphyria showed that high levels of tacrolimus triggered an acute attack and that the patient’s symptoms resolved once tacrolimus levels were lowered into the therapeutic range, thereby suggesting a role for tacrolimus in precipitation of AIP attacks[20].On the other hand, hyperinsulinism may be associated with clinically stable AIP[21].

Mouse models of AIP show key differences in glucose metabolism between AIP and non-AIP mice. There are also differences in the level of enzymes in the pentose-phosphate pathway and glutathione metabolism, which can lead to decreased hepatic glucose and exacerbate AIP. AIP mice have been shown to rely more on gluconeogenesis and fatty acid metabolism for maintaining blood glucose levels as compared to control mice, which rely more on glycogen metabolism[22].

Although medications are a common trigger for AIP, the patient was not taking any medications commonly known to cause AIP. He was transiently treated with mesalamine, although the Norwegian Porphyria Center website[23],which serves as a clearinghouse for information on drug “porphyrinogenicity”, indicates that mesalamine has low porphyrinogenic potential. In addition, the patient’s symptoms continued several months after stopping the drug. The patient had not been exposed to other new drugs, had not undergone surgery, and had no recent infections during this time, rendering this etiology less likely.

We present an older subject with a common presentation of an uncommon disease, whose post-transplant complications and medications may have contributed to precipitating his previously undiagnosed AIP. A high index of suspicion is needed to consider the possibility of a heme synthesis disorder, which presents with the common symptoms of abdominal pain, high blood pressure, and anxiety, in renal transplant patients.