Post-transplant nephrotic syndrome (PTNS) in a renal allograft carries a 48% to 77% risk of graft failure at 5 years if proteinuria persists. PTNS can be due to either recurrence of native renal disease or de novo glomerular disease. Its prognosis depends upon the underlying pathophysiology. We describe a case of post-transplant membranous nephropathy (MN) that developed 3 mo after kidney transplant. The patient was properly evaluated for pathophysiology, which helped in the management of the case.

This 22-year-old patient had chronic pyelonephritis. He received a living donor kidney, and human leukocyte antigen-DR (HLA-DR) mismatching was zero. PTNS was discovered at the follow-up visit 3 mo after the transplant. Graft histopathology was suggestive of MN. In the past antibody-mediated rejection (ABMR) might have been misinterpreted as de novo MN due to the lack of technologies available to make an accurate diagnosis. Some researchers have observed that HLA-DR is present on podocytes causing an anti-DR antibody deposition and development of de novo MN. They also reported poor prognosis in their series. Here, we excluded the secondary causes of MN. Immunohistochemistry was suggestive of IgG1 deposits that favoured the diagnosis of de novo MN. The patient responded well to an increase in the dose of tacrolimus and angiotensin converting enzyme inhibitor.

Exposure of hidden antigens on the podocytes in allografts may have led to subepithelial antibody deposition causing de novo MN.

Core Tip: This is a case presentation of a patient who developed post-transplant nephrotic syndrome 3 mo after transplantation and was diagnosed with de novo membranous nephropathy (MN). He had received a well-matched living donor kidney. According to the literature, the most common causes of de novo MN include secondary causes and antibody mediated injury, which we ruled out. This patient was treated with increased dosage of tacrolimus and an angiotensin converting enzyme inhibitor, which resulted in a good recovery. We favoured a new concept of pathogenesis of de novo MN, which requires the identification of the causative antigens.

The development of proteinuria after kidney transplantation is not uncommon, with 3% to 14% of recipients presenting with post-transplant nephrotic syndrome (PTNS). The risk of allograft loss with persistent proteinuria at 5 years is around 48% to 77%[1]. This may be due to either a recurrence or new (de novo) development of glomerular disease. It is rather difficult to differentiate between these two possibilities because only 15% to 20% of native kidneys are subjected to biopsy before transplantation[2]. Factors, such as immunosuppression, donor specific anti-human leukocyte antigen (HLA) antibodies (DSA), acute rejection, hypertension and infection, might pose a diagnostic dilemma in regard to the clinical picture and histopathology of the graft. We hereby present a case of a kidney transplant patient who developed PTNS in the early period following transplantation.

There were no chief complaints. Abnormal signs were observed at the 3-mo follow-up after renal transplantation.

A 22-year-old male patient was diagnosed with end-stage kidney disease due to chronic pyelonephritis and received dialysis for 8 mo. He received a live donor kidney transplant from his 42-year-old mother in August 2020. HLA-A, B and DR mismatches were 1-1-0. He was not given induction therapy and was maintained on triple immunosuppression (tacrolimus, mycophenolate mofetil and prednisolone). He was discharged on day 7 with a serum creatinine of 0.9 mg/dL (normal: 0.7-1.2 mg/dL). His graft duplex scan was normal, and tacrolimus 12-h trough level was maintained at 10 ng/mL. At the time of discharge, his urine protein was normal. At the 3-mo follow-up, he had signs of mild pedal oedema.

The patient had a history of end-stage kidney disease due to chronic pyelonephritis treated with a renal transplantation 3 mo prior. A bilateral ureteric re-implantation for vesicoureteral reflux had been performed at the age of 6 years.

No significant personal and family history.

We observed mild pedal oedema, which was pitting in nature.

His urine showed + 4 proteinuria, and urine protein/creatinine ratio was 4.6 mg/mg (normal: < 0.2 mg/mg) with stable serum creatinine. We recorded a serum albumin level of 3 gm/dL and total cholesterol of 295 mg/dL, suggestive of PTNS.

Allograft biopsy was performed and subjected to light, immunofluorescence and electron microscopy to rule out secondary causes of PTNS. Light microscopy revealed a thickening of the basement membrane and spikes at high power magnification with periodic acid-Schiff silver methenamine stain (Figures 1A and 1B). Immunofluorescence microscopy showed IgG deposits along the glomerular basement membrane in a granular pattern (Figure 2), suggesting membranous nephropathy (MN). 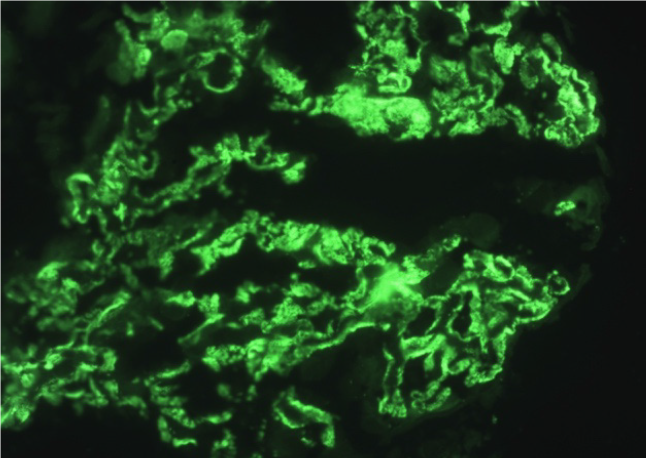 This was a case of PTNS that was histologically suggestive of MN. We conducted further investigations to identify secondary causes of MN, antibody-mediated rejection (ABMR), and differentiation of recurrence vs de novo MN.

This patient’s serology was negative for hepatitis B virus, hepatitis C virus and hepatitis E virus. Cytomegalovirus was also undetected by polymerase chain reaction. Antiphospholipase A2 receptor antibody testing was negative. There was no evidence of post-transplant malignancy upon clinical assessment and detailed investigations. Secondary causes of MN were ruled out.

In this recipient, the donor class II HLA was fully matched. When he developed proteinuria, DSA was negative. His biopsy did not show any changes of ABMR. Electron microscopy did not show duplication of peritubular capillaries or glomerular basement membrane (Figure 3). The C4d stain was also negative (Figure 4). These findings ruled out ABMR in our case. 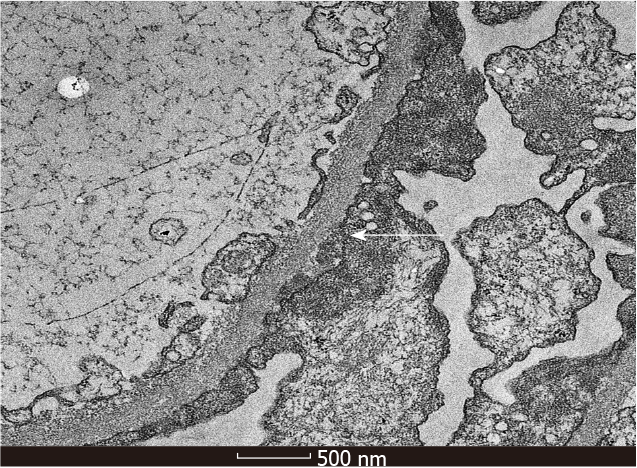 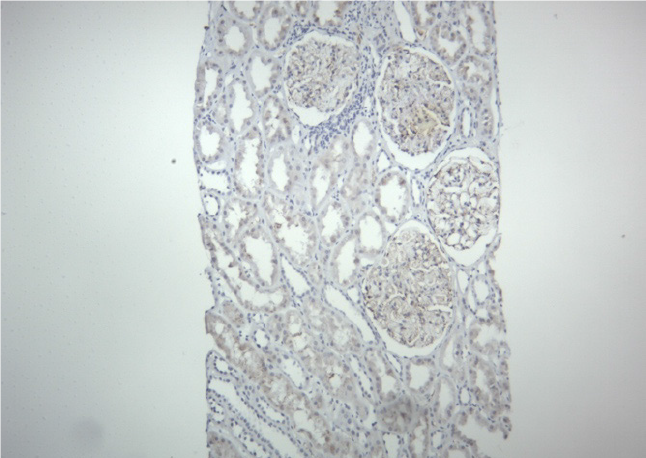 The biopsy revealed positive IgG1 deposits and scarcity of IgG4 after immunohistochemistry (Figures 5A and 5B).

The patient’s tacrolimus 12-h trough level at the time of development of PTNS was 5.9 ng/mL. The dose of tacrolimus was increased to achieve a level of 9-12 ng/mL. Ramipril was commenced and optimized to 5 mg twice a day. Serum creatinine and potassium were checked on day 10 and remained unchanged. The dose of ramipril was kept tolerable to avoid hypotension.

At 6 mo after the biopsy, his urine protein creatinine ratio decreased to 0.6 mg/mg. His graft function remained stable with a serum creatinine level of 0.94 mg/dL.

Recurrence of idiopathic MN after renal transplant is seen in 25%-40% of cases. A diagnosis of de novo MN is reported in 1%-2% of post-transplant adults and up to 9% in paediatric renal transplant recipients[3]. The exact incidence is difficult to ascertain due to variability in pretransplant biopsies to confirm diagnosis[2,4].

Sometimes, a recurrence of MN may be misdiagnosed as de novo MN due to undiagnosed native kidney disease[2,4]. Pathology findings of de novo MN are like those of idiopathic MN, except for mesangial proliferation, focal and segmental distribution of subepithelial deposits, and simultaneous presence of different stages of disease in de novo MN[3]. Anti-phospholipase A2 receptor antibodies have been identified in most cases of idiopathic MN, whereas anti-phospholipase A2 receptor antibodies are absent in de novo MN because of other causative antigens that remain unidentified[2,3,8-10]. Different IgG subtype depositions have been reported in cases of primary/recurrent MN and de novo MN. IgG4 was commonly deposited in recurrent MN, whereas IgG1 was observed in de novo MN. In our case, there was an absence of anti-phospholipase A2 receptor antibodies and IgG1 deposition in the kidney biopsy, which confirmed the diagnosis of de novo MN.

Schwarz et al[11] published a retrospective observational study of renal transplant subjects transplanted between 1970 and 1992 who developed de novo MN. They observed histopathological features of acute vascular rejection in 17 out of 21 recipients and interstitial rejection in 12 out of 21 recipients. During this period, the availability of DSA measurement techniques and knowledge of diagnosing ABMR may have been limited. Other investigators have reported a possible relationship of donor-specific alloantibodies in the development of de novo MN[12]. Wen et al[13] reported the presence of HLA-DR on podocytes of recipients who developed de novo MN; they also reported a higher incidence of peritubular capillaritis, intimal arteritis and C4d deposits in post-transplant MN in comparison to recurrence of idiopathic MN in the renal allograft. There are also reports of poor prognoses in patients who had de novo MN possibly related to ABMR[11,12]. Interestingly, Bansal et al[14] reported a case of de novo MN following a renal transplant between conjoined twins. Even in our case, the mother was the donor, with fully matching HLA-DR. The biopsy of our patient confirmed that there were no changes suggestive of acute or chronic ABMR.

There may be another pathophysiological mechanism precipitating in the development of de novo MN. It is likely that immunological, viral, mechanical or ischemic injury to the graft may expose the podocyte cryptic antigens to the recipient immune system. This may trigger an activation of innate immunity, resulting in production of auto- or alloantibodies against the antigens on the podocyte. This antigen-antibody complex develops at subepithelial sites and causes activation of complement and membrane injury[9].

There is lack of consensus in the published literature about the optimal management of de novo MN. Schwarz et al[11] reported no response to methylprednisolone bolus and a high graft loss. El Kossi et al[12] hypothesized that de novo MN was an atypical manifestation of ABMR. If a secondary cause, such as viral infection or malignancy, is identified, then the treatment of the underlying cause might treat MN. Cyclophosphamide or rituximab has been tried, as in the treatment of idiopathic MN[8]. In our case, we optimized the dose of tacrolimus and started an angiotensin converting enzyme inhibitor; the proteinuria was significantly reduced, and graft function was stable after 6 mo, suggesting a good prognosis.

De novo MN, a rare disease in renal allografts, may be due to exposure of a hidden antigen on the podocytes that is recognized by the immune system of the recipient. The causative antigens still need to be identified. The reported poor prognosis of de novo MN may be due to misdiagnosed ABMR, as it was in an era prior to routine availability of DSA by the Luminex platform (Bio-Rad Laboratories, Hercules, CA, United States) and recognition of C4d for an ABMR diagnosis. Proper evaluation and targeting of the pathophysiological processes may help in the management of these patients.