Hematopoietic stem cell transplantation (HSCT) is widely performed as a treatment for malignant blood disorders, such as leukemia. To achieve good clinical outcomes in HSCT, it is necessary to minimize the unfavorable effects of acute graft-vs-host disease (GVHD) and induce the more tolerable, chronic form of the disease. For better management of GVHD, sensitive and specific biomarkers that predict the severity and prognosis of the disease have been intensively investigated using proteomics, transcriptomics, genomics, cytomics, and tandem mass spectrometry methods. Here, I will briefly review the current understanding of GVHD biomarkers and future prospects.

Core Tip: Graft-vs-host disease (GVHD) is the most unfavorable complication of hematopoietic stem cell transplantation (HSCT). Minimizing acute GVHD and inducing its chronic form is necessary to achieve good clinical outcomes in HSCT. GVHD consists of inflammation induced by the conditioning regimen, the alloimmune response of the T lymphocytes, and organ damage due to the graft-vs-host reaction. Biological factors have been comprehensively analyzed to identify novel combinations of biomarkers that predict acute GVHD severity and prognosis more efficiently. Currently, there are no useful biomarkers that can predict the severity and prognosis of chronic GVHD or serve a practical clinical use.

Hematopoietic stem cell transplantation (HSCT) is widely performed as a treatment for malignant blood disorders, such as leukemia. Graft-vs-host disease (GVHD) is the most unfavorable complication of HSCT. Although the diagnostic process and management of GVHD are improving, GVHD remains a major clinical problem in transplantation medicine[1,2].

GVHD develops in the background of the immune response of the transplanted immune-competent cells against the alloantigens of the host, which is called the graft-vs-host (GVH) reaction. Such a reaction can cause allogeneic HSCT to induce GVHD. When the GVH reaction induces unfavorable symptoms, usually symptomatic organ damage, it is considered to be GVHD. When HSCT is performed as a treatment for malignant diseases in particular, the GVH reaction is therapeutically necessary, and it has been shown that a chronic GVH reaction (chronic GVHD) is correlated with the prevention of disease relapse and improved disease-free survival[3]. In acute GVHD, the relapse prevention effect is offset by its life-threatening complications, and a significant improvement in disease-free survival is difficult to prove in general[4]. Therefore, it is necessary to minimize the unfavorable effects of acute GVHD and induce tolerable chronic GVHD to achieve good clinical outcomes in HSCT for malignant diseases.

The severity of acute GVHD or the degree of organ damage is classically evaluated based on the clinical symptoms of three organs: the skin, liver, and intestine[5]. Therapeutic intervention for acute GVHD is usually considered in cases of grade 2 or above. It is difficult to predict responsiveness to treatment based on clinical severity and laboratory data before the intervention. It has been reported that the treatment response evaluated through clinical manifestations is rather important to predict prognosis. However, at least 4 wks of observation is necessary to determine the clinical improvement[6] and it is reported that 1 wk of clinical observation is not enough to predict the prognosis[7]. Therefore, a useful biomarker that can predict the responsiveness and prognosis of acute GVHD during a short interval has been intensively investigated. In addition, it must be considered that changes in the conditioning regimen, transplanted stem cells, and therapeutic immunosuppressive drugs may affect the utility of the rating system. Furthermore, we may have to re-consider the validity of conventional GVHD grading for the utility of novel biomarkers.

In this short review, acute GVHD-related biomarkers are discussed according to three divided phases: (1) An initiating proinflammatory period; (2) A GVH reaction induced by an immune response to alloantigens; and (3) The induction of organ damage as a result of GVHD (Figure 1). It is reasonable to expect that the biomarker of the GVH reaction is correlated with the intensity of GVHD. However, this is to be answered in terms of GVHD prognosis. Is the absolute value of the biomarker important? Is the duration of elevated biomarkers important? Otherwise, is responsiveness to the treatment important? Furthermore, the prognosis of GVHD is affected by host factors, which makes this problem more complicated. 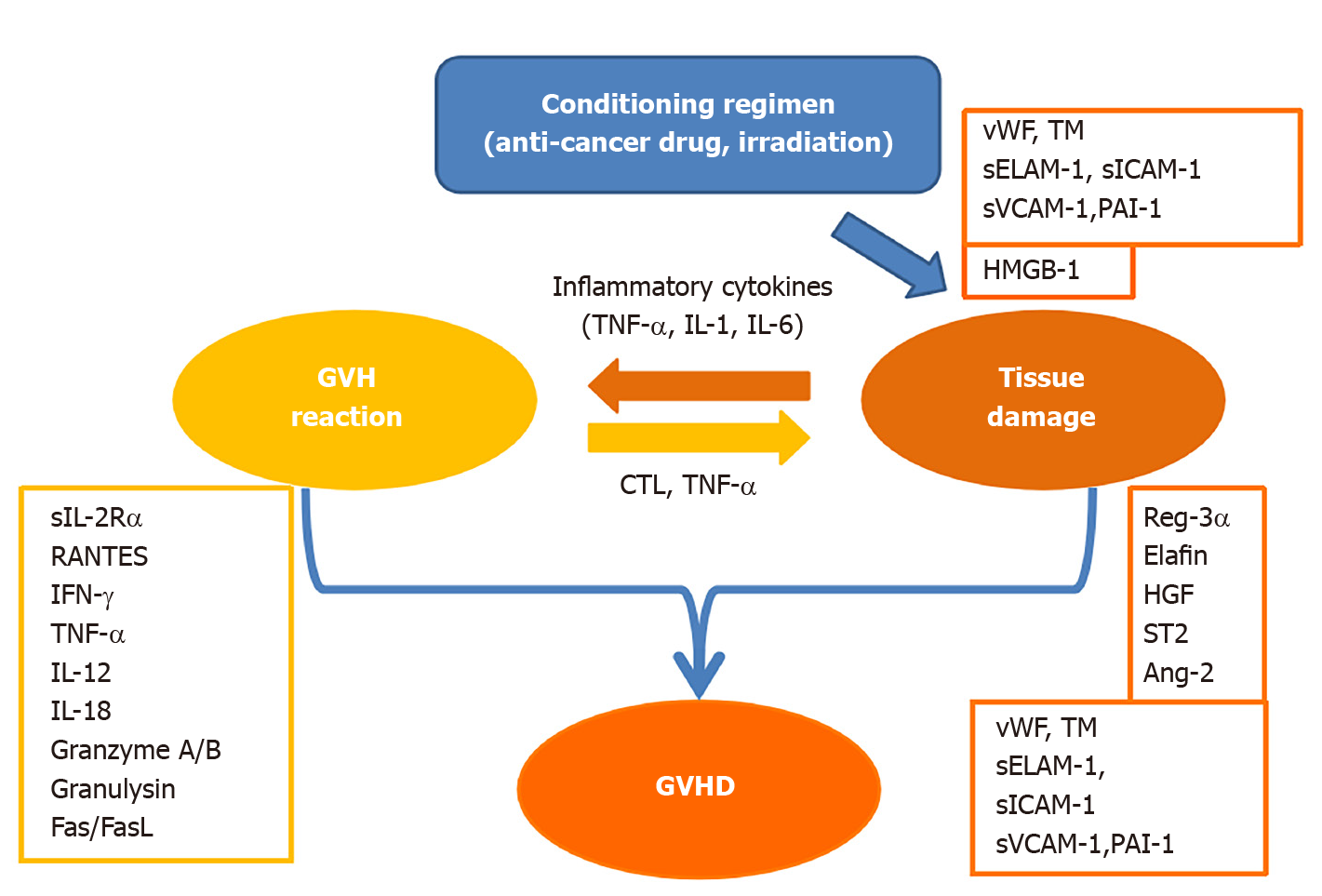 Inflammatory cytokines such as tumor necrosis factor-α (TNF-α), interleukin-1 (IL-1), and IL-6 are known to be released early in the transplant from the tissue or vascular endothelium damaged by the anticancer drugs or irradiation used in the conditioning regimens. These tissue-derived cytokines promote vascular endothelial damage and are thought to amplify the GVH reaction of transplanted lymphocytes through the activation of antigen-presenting cells[8]. When these cytokines are excessively produced, they are referred to as cytokine storms and are thought to be involved in hyperacute GVHD.

THE BIOMARKERS OF THE GVH REACTION

The most frequently used biomarker of T cell activation is a soluble IL-2 receptor (sIL-2R)[9]. regulated upon activation, normal T cell expressed and secreted (RANTES) is also used[10]. Recently, a sensitive assay system has been developed for several T cell derived extracellular vesicles (TDEVs), which are triggered for release by activation[11]. It was found that TDEVs accurately reflect the GVH reaction and acute GVHD specifically[12]. In addition, interferon-g (IFN-g) released by activated T lymphocytes activates macrophages to produce TNF-α, which promotes tissue injury[13] and is reported to be a useful biomarker of GVHD[14,15]. In contrast, ferritin and soluble CD163, which are also produced by activated macrophages in this phase, are reported to be associated with the prognosis of HSCT rather than GVHD[16]. It has been reported that type 1 T helper (Th1) immunity is the main component of acute GVHD, and that Th1 cytokines, IL-12, and IL-18 are biomarkers of GVHD[17].

THE BIOMARKERS THAT REFLECT ORGAN DAMAGE DUE TO GVHD
Gastrointestinal tract

Regenerating islet-derived 3α (Reg-3α) is a C-type lectin that was discovered in regenerating islet cells. Reg-3α has antibacterial activity against gram-positive bacteria and is thought to be produced during the destruction and repair of intestinal tissue. It has been reported that the level of Reg-3α on days 7 and 14 of HSCT predicts acute GVHD and non-relapse mortality (NRM) very well[24,25].

Elafin, also known as skin-derived antileukoprotease or peptidase inhibitor 3, correlates well with skin symptoms due to GVHD[26]. It is thought to be produced as part of the tissue repair process for skin lesions caused by GVHD.

Hepatocyte growth factor (HGF) regenerates hepatocytes, and serum HGF levels are high in acute GVHD[27]. It is considered to reflect the regeneration response of hepatocytes damaged by GVHD. Interestingly, HGF has the ability to relieve acute GVHD in mice[28].

At present, it is considered that GVHD is an exacerbating factor of vascular endothelial injury, and intractable vascular endothelial disorder and the elevated vascular injury biomarker are thought to be associated with refractory GVHD[35] and poor prognosis[36,37] rather than a predictor of GVHD.

Suppression of tumorigenicity 2 (ST2) belongs to the IL-1 receptor family, binds to IL-33, and induces a Th2 immune response. Soluble ST2 inhibits IL-33 as a decoy receptor, and it is said to act on a Th1 deviated response[38]. ST2 has been reported as a biomarker of cardiovascular diseases and is thought to reflect myocardial repair and remodeling. When ST2 is high, myocardial damage is considered severe, and the prognosis of cardiovascular diseases is poor[39].

ST2 is reported to reflect refractory GVHD in the examination of acute GVHD[40]. It has been reported that the ST2 value on day 28 post-transplantation is associated with grade 3–4 GVHD with a much better NRM rate than TNF-α, IL-8, Reg-3a, sIL-2Ra, elafin, and HGF in the cord blood transplantation cohort[41]. It is speculated that ST2 is elevated along with tissue damage in refractory GVHD, and then the increased ST2 may induce a Th1 response by inhibiting IL-33, thus further aggravating the acute GVHD.

High-mobility group box 1 (HMGB-1) is a ubiquitous nuclear protein that regulates chromatin function, similar to histones. HMGB-1 is released from activated macrophages or damaged tissues and induces inflammation via interactions with toll-like receptors (TLR2 or TLR4). Therefore, HMGB-1 is considered a damage-associated molecular pattern (DAMP). In a mouse model, HMGB-1 has been reported to be involved in the pathogenesis of GVHD[42,43]. In humans, increased HMGB-1 levels on day 0 are reported to be associated with vascular injury, but not necessarily with GVHD[44].

DO GVH REACTION BIOMARKERS BECOME A PREDICTOR OF GVHD?

It is reasonable that the GVH reaction biomarkers are related to GVHD because the latter is fundamentally based on the former. However, it is also true that it is quite difficult for one or a few biomarkers to predict GVHD prognosis precisely, because there are numerous and diverse pathological factors involved in the process of HSCT, in addition to the heterogeneity of the donor and recipient.

Recently, a comprehensive analysis of biological factors has been performed using proteomics, transcriptomics, genomics, cytomics, and tandem mass spectrometry methods to identify novel combinations of biomarkers that predict the severity and prognosis of GVHD more efficiently rather than searching useful biomarkers by disclosing the basic pathogenesis of GVHD[45].

IS IT BETTER TO MAKE PREDICTIONS BEFORE OR AFTER TREATMENT?

In the treatment of pediatric acute lymphocytic leukemia, a remarkable improvement in prognosis has been achieved under the two-step stratification of therapy by pre-treatment and steroid-sensitive factors, without the introduction of new anticancer drugs between 1960 and 1995[46].

Based on a similar concept, it will be necessary to stratify therapeutic strategies by considering both the severity of GVHD and responsiveness to treatment according to the proper combination of biomarkers to overcome refractory GVHD (Figure 2). There are several reports of biomarkers that predict responsiveness to GVHD therapy in a short observation period[47,48]. However, it must also be taken into consideration that the clinical outcomes of GVHD are affected by the progress of preventive and targeted therapy for GVHD. 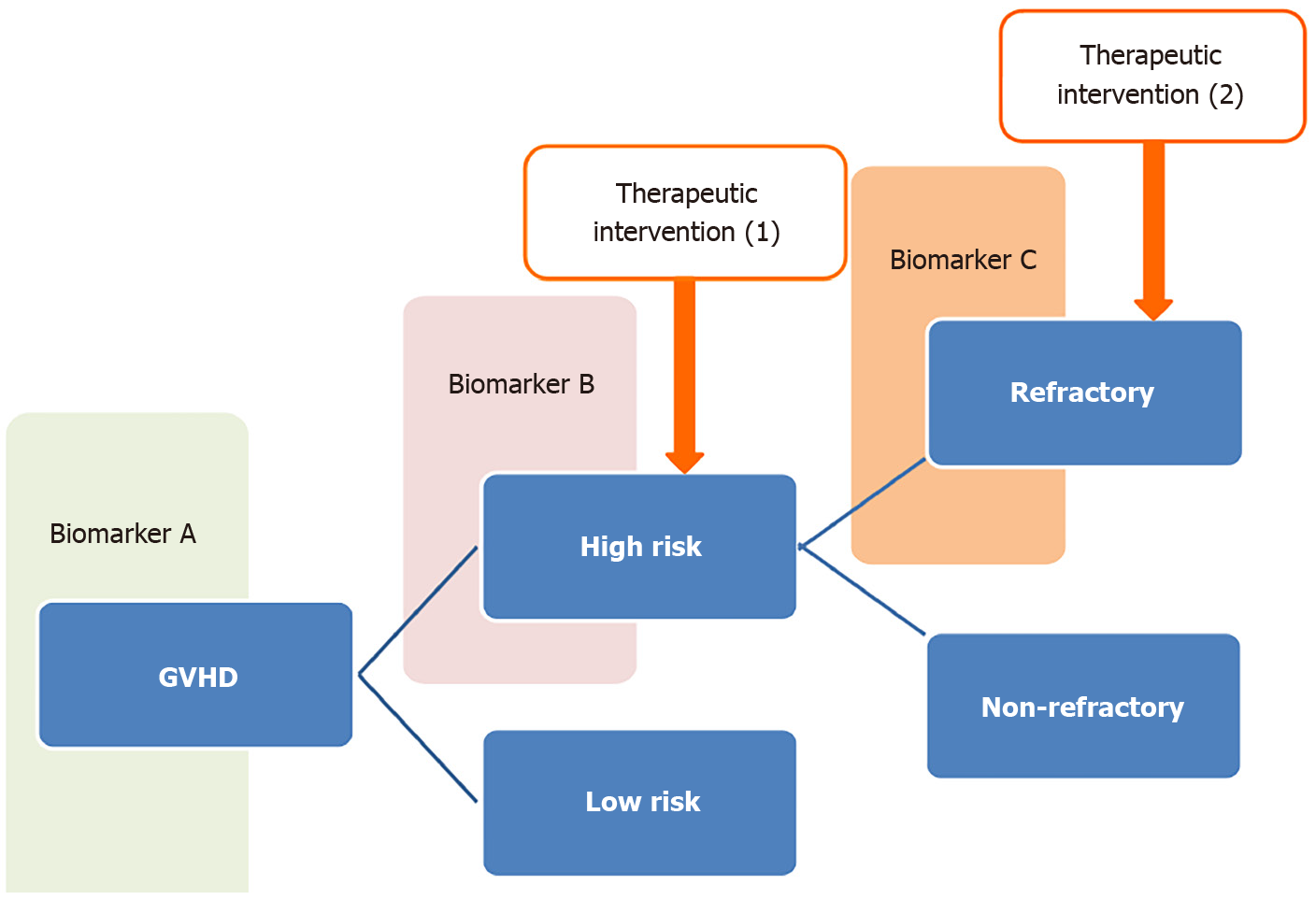 Chronic GVHD is similar to collagen disease in that its pathological essence is based on immune dysregulation[49]. In chronic GVHD, a high level of soluble B cell-activating factor, an abnormality of the B lymphocyte subset[50], and a decrease in regulatory T cells (CD4+CD25+FOXP+/CD4 ratio)[51] have been reported. matrix metalloproteinase-3 (MMP-3) has been reported to be associated with non-infectious obstructive bronchiolitis[52], which is one of the most intractable and lethal complications of chronic GVHD. Currently, there are no useful biomarkers that can predict the severity and prognosis of chronic GVHD or serve a practical clinical use.

Recently, there has been much progress in the understanding of acute and chronic inflammation based on basic immunology[53,54]. In these studies, it was reported that chromatin and DNA modifications in immune cells are significant in chronic inflammation. Based on a new approach towards and an understanding of chronic GVHD, it is expected that its essential pathology will be disclosed and the available biomarkers will be discovered in the near future.

The sensitive and specific biomarkers that predict the severity and prognosis of GVHD have been intensively investigated through using proteomics, transcriptomics, genomics, cytomics, and tandem mass spectrometry methods. Although the utility of available biomarkers have limitations for the clinical decisions, it is expected that its essential pathology will be disclosed and the more useful biomarkers will be discovered in the near future.

I appreciate all of the staff at the Tokyo Medical and Dental University Hospital who were involved in the medical care of patients with SCT.