Arsenic-contaminated drinking water is a public health problem in countries such as Taiwan, Bangladesh, United States, Mexico, Argentina, and Chile. The chronic ingestion of arsenic-contaminated drinking water increases the risk for ischemic heart disease, cerebrovascular disease, and prevalence of hypertension. Although toxic arsenic effects are controversial, there is evidence that a high concentration of arsenic may induce hypertension through increase in vascular tone and resistance. Vascular tone is regulated by the rhythmic contractions of the blood vessels, generated by calcium oscillations in the cytosol of vascular smooth muscle cells. To regulate the cytosolic calcium oscillations, the membrane oscillator model involves the participation of Ca2+ channels, calcium-activated K+ channels, Na+/Ca2+ exchange, plasma membrane Ca2+-ATPase, and the Na+/K+-ATPase. However, little is known about the role of K+ uptake by sodium transporters [Na+/K+-ATPase or Na+-K+-2Cl- (NKCC1)] on the rhythmic contractions. Vascular rhythmic contractions, or vasomotion are a local mechanism to regulate vascular resistance and blood flow. Since vascular rhythmic contractions of blood vessels are involved in modulating the vascular resistance, the blood flow, and the systemic pressure, we suggest a model explaining the participation of the sodium pump and NKCC1 co-transporter in low dose arsenic exposure effects on vasomotion and vascular dysfunction.

Core tip: Vascular tone is regulated in part by cytosolic calcium oscillations. Arsenic can induce an increase in vascular tone and resistance. We suggest a model explaining the participation of the sodium pump and Na+-K+-2Cl- co-transporter in low dose arsenic exposure effects on vasomotion and vascular dysfunction.

Arsenic toxicity is a global environmental health problem. The toxicity of this metalloid has been observed in various countries, including Taiwan[1], Bangladesh[2], Mexico[3], United States[4], Hungary[5], Argentina[6], and Chile[7]. Volcanic emission is one of the natural sources of arsenic, and individuals are majorly exposed through contaminated drinking water[8]. Smelting companies are also an important source of individual and population exposure to these kinds of heavy metals contamination. Contamination has been reported in Russia[9], United States[10], Mexico[11], Peru[12], and Chile[13]. There are few studies showing that Chinese workers in copper smelter, steel or iron have high levels of total arsenic in urine (50 g/g creatinine). These studies include those reported for Fushun city[14], Yunnan province[15], and Fuxin city[16].

There are epidemiologic studies that showed an association between chronic arsenic exposure and vascular diseases[17,18]. In fact, the ingestion of the arsenic-contaminated drinking water produced an increased risk for ischemic heart disease, cerebrovascular disease, and peripheral vascular resistance[19]. Other studies report positive associations between chronic arsenic exposure in drinking water, and the prevalence of hypertension[20-24].

Currently, arsenic effects on systemic blood pressure are controversial[25,26]. However, there is ample evidence that arsenic exposure mainly increases the vascular peripheral resistance[19,27], which defines the difficulty to blood flow through the blood vessels, particularly the small arteries.

Vascular rhythmic contractions may be considered as a compensatory mechanism to preserve the perfusion of tissues[31], especially in patients with hypertension[32,33] or ischemia[34]. The mechanisms of the vascular rhythmic contractions may account for 3 states of contraction in blood vessels with different levels of calcium. These include small, medium, and tonic contraction, but only the medium concentrations produce rhythmic contractions[35]. The changes of vascular tone are generated by calcium oscillations in the cytosol of vascular smooth muscle cells[36]. To regulate the cytosolic calcium oscillations, the membrane oscillator model considers that activity of Ca2+ channels, calcium-activated K+ channels, Na+/Ca2+ exchange, plasma membrane Ca2+-ATPase, and the Na+/K+-ATPase, voltage-dependent calcium channel, and transient receptor potential channel are essential for maintaining calcium oscillations[37].

Little is known about the role of K+ uptake through Na+/K+-ATPase and Na+-K+-2Cl- (NKCC1) on the rhythmic contractions. Na+/K+-ATPase and NKCC1 cotransporter are responsible for the major K+ uptake in vascular smooth muscle cells[38-40]. Recent reports demonstrates that rhythmic contractions were associated with tonic and phasic responses, the tonic dependent on [Ca2+]i and the phasic on potassium efflux (through K+ channels) and potassium uptake[41,42].

NKCC1 is an obligatory symport system with an apparent stoichiometry of 1:1:2 sodium, potassium and chloride ratios respectively. Although the co-transporter is bidirectional in resting vascular smooth muscle cells, the sum of the electrochemical gradients for the three transported ion species determines net influx[55].

Evidence for the role of NKCC1 co-transporter on vascular rhythmic contractions is scanty, but it is worthy of note that the inward current of Cl- decreases rhythmic contractions by increasing vasoconstriction[47]. NKCC1 is responsible in part to keep intracellular Cl- concentration above the electrochemical equilibrium[56] as such helping to maintain the electrochemical gradient and cellular reactivity. Phenylephrine-induced stimulation of NKCC1 increases intracellular Cl- concentration, depolarize vascular smooth muscle cells[57], open L-type calcium channels[58] and produce vasoconstriction. In the vascular oscillator model[59], the release of intracellular Ca2+ from the reticulum stimulates the inward current of Cl-via the calcium-activated Cl- channel[60] and cyclic guanosine monophosphate (cGMP)-activated Ca2+-dependent Cl- channels[61]. This leads to membrane depolarization, opening L-type calcium channels and reduction in the oscillations of vascular tone. Therefore these findings suggest that the cotransporter NKCC1 would be responsible, in part, for vasoconstriction by chloride.

It is well established that heavy metals such as arsenic induce increases in vascular resistance by inducing vascular endothelial dysfunction (VED)[62,63]. VED consists of a reduction in endothelium-dependent vasorelaxation caused by a decrease in the release of endothelial NO[64]. Arsenic-induced VED is caused in part by oxidative stress.

Oxidative stress from pollutants like arsenic causes an increase in the reactive oxygen species, this leads to a modification of amino acids of proteins, mainly sulfur-containing amino acids methionine and cysteine[65]. Arsenic causes oxidative stress through peroxynitrite generation in aortic endothelial cells, producing loss of biological activity in enzymes and proteins[66,67]. In this context we had shown that chronic arsenic exposure in drinking water reduced acetylcholine-induced relaxation in female rat aorta[68], impairment of the endothelial nitric oxide synthase activity and decreasing of endothelial NO production[69,70].

Since arsenic decreases the NO bioavailability[62], and the NO increases Na+/K+-ATPase function[71] which enhances the vascular rhythmic contractions, we may suggest that arsenic decreases the vascular rhythmic contractions by Na+/K+-ATPase function (Figure 1). Similar conclusions would be expected with the Kir channel, as Chen et al[75] (2010) demonstrated that arsenic trioxide produces down-regulation of Kir channel in cardiomyocytes of rats, and the Kir channel function increases Na+/K+-ATPase activity[49]. 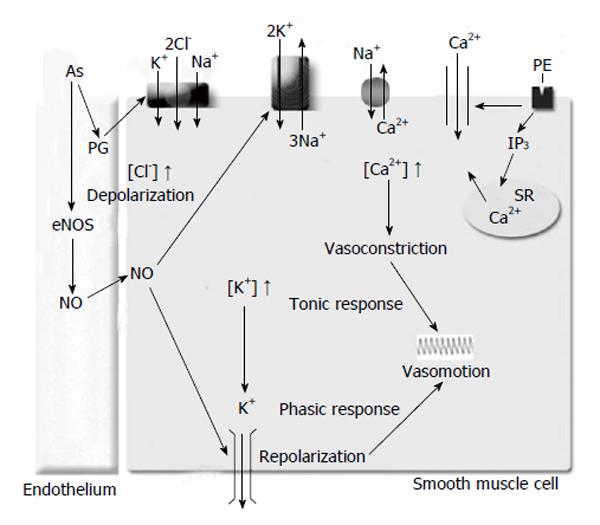 Figure 1 Putative model of arsenic effect on vasomotion phenomenon in blood vessels. The figure shows the stimulation of the Na+/K+-ATPase by endothelial nitric oxide (NO) and stimulation of the Na+-K+-2Cl- cotransporter by endothelial prostaglandins (PG). Arsenic would reduce NO bioavailability or would increase PG level, both of them would produce an increase in vasoconstriction or a decrease in the repolarization of the cell membrane, respectively, and then would reduce vasomotion. PE: Phenylephrine; As: Arsenic; eNOS: Endothelial nitric oxide synthase; SR: Sarcoplasmic reticulum.

Although the endothelial NO does not affect NKCC1 co-transporter function[76], the endothelial prostaglandins increase NKCC1 activity thereby enhancing the contractile response to agonist in rat aorta[77-80]. Moreover, the endothelial prostaglandins increase agonist-induced rhythmic contractions in rat aorta[81], rat mesenteric artery[82], and arterioles of the cheek pouch of male hamsters[42]. Furthermore, arsenic increases the cyclooxygenase-2 (COX-2) protein in aortic endothelial cells[67], COX-2 in HUVEC[83], and enhances COX-1 and COX-2 activities in hind paw muscle of male rats[84]. Therefore, as a result of the prostaglandins effect on the vascular contractility through NKCC1 described above, arsenic might increase the vascular rhythmic contractions by NKCC1 co-transporter function.

The major toxic species of arsenic used in several studies are arsenite (trivalent inorganic arsenic, i.e., arsenic trioxide) or arsenate (pentavalent inorganic arsenic). Although the concentration of arsenate in drinking water is higher than those of arsenite, toxic effects of arsenate have not been properly documented. Arsenate is mainly metabolized by organisms as monomethylarsonic acid and dimethylarsinic acid, which significantly are not toxic[85]. However, this theory of the methylation of inorganic arsenic as a detoxification process has been revised[86] as other trivalent methylated species with higher toxicity have been reported[87]. Possibly, the biological effect of arsenate is mainly by reduction to arsenite[88].