Filariasis is a common health problem in tropical and subtropical regions including India. It commonly presents with lymphatic involvement in form of nonpitting pedal edema, chylous ascites, chyluria, hydrocele and lymphocele. Detection of microfilaria in ascitic fluid is an extremely uncommon finding. We present a case of non chylous ascites where microfilaria were detected in the ascitic fluid.

Core tip: We report a rare case of postpartum ascites caused by filarial infection. There are only a few case reports where microfilaria were detected in ascitic fluid; among these, non chylous ascitis is even rarer.

Filarial infection is common in various Asian and African countries. It presents with various manifestations like ascites, pleural effusion and pedal edema; it may even be asymptomatic. We present an interesting and rare case of filariasis in ascitic fluid in postpartum female.

A 26 years old female residing in Uttar Pradesh, India, who was 2 mo postpartum, presented with chief complaints of abdominal pain and vomiting since 1 mo and abdominal distention since 15 d. The pain was in periumbilical, non radiating, dull, mild and continuous. It was associated with non-bilious vomiting, 2-3 episodes per day. She also complained of abdominal distention from the last 15 d, which was generalized and gradually increasing with increasing abdominal pain. She had undergone a Caesarean section 2 mo ago. The pregnancy had been uneventful. Her general physical, cardiovascular and respiratory systems examination did not reveal any abnormalities. Shifting dullness was present on abdominal examination without tenderness or hepatosplenomegaly. 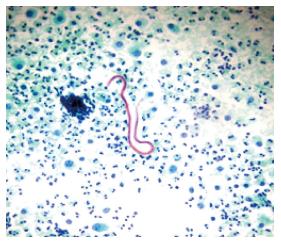 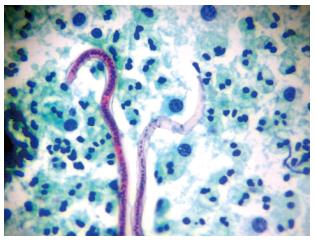 Figure 2 Microfilaria with nuclei. Note that the tail portion is devoid of the nuclei (pap 400 ×). 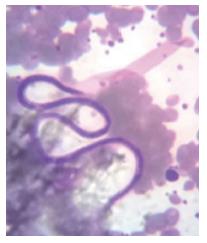 Figure 3 Microfilaria in peripheral smear. Sample collected at 2 am.
DISCUSSION

Filariasis is still endemic in many parts of world including India and a predominant cause of health morbidity. It is quite prevalent in many states of India like Jharkhand, Andhra Pradesh, Uttar Pradesh, Gujarat, Orissa, Tamil Nadu, Kerala and Bihar. Many infected patients remain asymptomatic.

The definitive host for filarial infection is man. The parasites have a predilection for lymphatics. The Culex mosquito is an intermediate vector. They ingest microfilariae from affected individuals and this larvae develop into active motile forms in 10-12 d for further transmission into a new host. In the definitive host, the larvae develop into adult worms in lymphatics and give rise up to 50000 worms/d.

The adult worm usually resides in lymphatics while microfilariae traverse in peripheral blood. Microfilaria are visible in specimens of tissue or fluids due to obstruction of lymphatics and vascular channels. Inflammatory conditions, major trauma, even stasis or tumours can precipitate obstruction. Due to this obstruction, there is lymphatic damage and extravasation of microfilariae. Based on the detection of microfilariae in blood samples and body fluids, we establish our diagnosis. On autopsy, adult filarial parasites can be demonstrated.

Moreover, pregnancy is associated with pelvic congestion due to effect of progesterone and other placental hormones. Hypothetically, caesarean section could be a cause of traumatic rupture of lymphatic vessel with subsequent spread of microfilariae into the peritoneal cavity[3].

Ascites and pleural effusion are uncommon findings. Commonly they are chylous in nature due to blockage of lymph from the occluded lymphatic channels. Such microfilarial ascites being non-chylous microfilarial ascites is extremely rare. Lymphangitis because of partial obstruction is a proposed mechanism for such exudative collection[4]. Ascitic fluid TG could also be low due to inadequate diet, but ascitic fluid TG content is low in our patient inspite of adequate food intake.

Many authors have reported microfilariae in breast lump as well as in lymph node aspirates[5,6]. Microfilariae have been detected in thyroid swelling and rarely in subcutaneous swellings[7,8]. Detection of microfilaria in body fluids like pleural effusion and ascites is rare and such ascites being non chylous is extremely rare.

Therefore clinical suspicion and careful cytological examination is extremely important to avoid misdiagnosis. Demonstration of parasite in cytology will be helpful not only in the right diagnosis but also in instituting specific treatment.

Vomiting since 1 mo and abdominal distention since 15 d.

Ascites on percussion of abdomen without organomegaly.

Patient was treated with diethylcarbamazine for 21 d and albendazole for 7 d.

Shah and colleagues present an interesting and very rare case of ascites due to filariasis in a young woman a few weeks after giving birth.