In consideration of the poor results obtained with conventional treatments, a review of alternative treatments for elderly patients with glioblastoma was researched in this study. The proposal considers the elimination of human cytomegalovirus, modifying the immune response, arresting growths, blocking some signaling pathways, and modulating the effects of oxygen reactive species.

Core tip: It is necessary to reconsider the treatment of elderly patients with glioma, focusing on their life quality when conventional treatment is used, such as, chemotherapy and radiotheraphy, in review of the fact that these treatments cause the patient further suffering. This is a review of othe therapeutic options, including some phase I vaccine trials.

Glioblastoma (GBM) is the most aggressive and frequent of all brain tumors. Glioblastoma usually appears between the ages of 45 and 70 years[1]. The goal of surgery is to confirm the diagnosis and reduce the effect of the tumor mass[2]. Survival of elderly patients of more than 71 years, with glioblastoma GBM, is poor. Temozolomide (TMZ) and radiotherapy (RT) improves the average patient survival rate by as much as 10 to 13 mo, in patients of more than 71 years[3].

Stereotactic radiosurgery, whole brain radiation therapy, and surgery, in isolation or in combination[4] with gamma knife, cyberknife, LINAC, stereotactic brachytherapy, boron neutron capture therapy and hadrontherapy, amongst other treatments, have been used as therapy[5,6]. Although all these methods have been reported to improve prognostic indices, when under constant observation, the statistical analyzes of survival are not effective. Radiation therapy has considerable limitations, mainly infiltrating glioma characteristics and neuronal damage.

Although the survival rate is greater when using chemotherapy than when not used[7], the difference in the number of months survived is very low, and the quality of life is much lower when radiation is used rather than with no chemotherapy.

Gliomas show tumor-associated antigens, which should be detectable by the immune system, however, there are shortcomings in the elimination of a tumor.

Gliomas lack clear-cut tumor-rejection antigens for immune targeting by CD8+ T-cells and indicate cancer/testis antigens as NY-ESO-1[8,9]. However, other antigens from human cytomegalovirus (HCMV) have been found.

The question is, how can tumor growth be limited without chemotherapy or radiotherapy? Here, some therapeutic options are reviewed, including some phase I vaccine trials, supporting treatment of elderly patients with glioma (Figure 1). 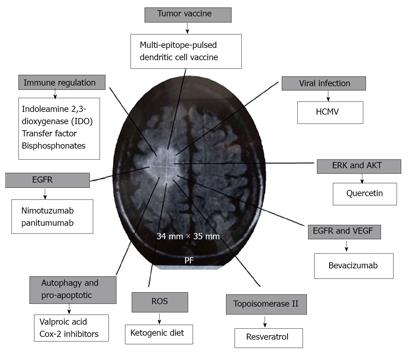 It has been suggested that glioma in elderly patients should be treated as a tumor associated with viral infection[10], this would mean treatment for the elimination of the infectious agent, arresting growths and apoptosis, modifying the immune response and blocking some signaling pathways, which involve metastasis and the modulation of reactive oxygen species (ROS).

Glioma tissues indicate the change in a cascade of a viral protein, typical of replicative HCMV[11], the virus is trophic in glial cells and the HCMV infection remains in between 50% to 90% of adults. The HCMV can be reactivated when there is inflammation and immunosuppression and plays an active role in the pathogenesis of a glioma[12].

In order to clarify the controversy surrounding glioma and HCMV, some researchers have shown the close relationship between HCMV and glioma in the context of mutations related to their existence[13].

In order to reduce the effects of HCMV on the glioma it is possible to use valganciclovir, which targets the DNA polymerase, or the Cox-2 inhibitor celecoxib, and averts HCMV replication by decreasing PGE2 levels[14]. Moreover, infiltrating gliomas in microglia, have been found to be an important source of PGE2, Cox-2 inhibitors and are an alternative, as opposed to glucocorticoids, in peritumoral edema of malignant gliomas[15]. In addition to its anti-inflammatory properties, celecoxib is able to exert a pro-apoptotic effect in vitro and in vivo in the absence of the action of Cox-2 in malignant glioma cells. In fact, it has developed a variant of this substance, 2,5-dimethyl-celecoxib, which is more potently cytotoxic against these cells[16]. The effect of celecoxib is dependent on the existence of p53[17].

One mechanism that could be used in the treatment of gliomas, is the induction of autophagy. Valproic acid is a potent histone deacetylase inhibitor which induces cell differentiation, growth arrest and apoptosis in gliomas and other cancers. Valproic acid induces autophagy in glioma cells, independently from apoptosis[18].

Chloroquine and quinacrine bind tightly to nucleic acids, in particular CG sequences, and reinforce its structural configuration and preventing mutagenesis[19]. Chloroquine also acts as an immunomodulator through the inhibition of phospholipase A2 and the tumor necrosis factor-α (TNF-α)[20]. Chloroquine improves survival in patients with GBM when added to conventional therapy[21,22].

Gliomas show a sequence of events that increase immunosuppressant cytokines, such as interleukin-10 (IL-10), transforming the growth factor-β (TGF-β), prostaglandin E2, inducing regulatory T cells (Treg), and decreasing costimulatory molecules, all results lose the function of effector T cells. Moreover, GBM cells show human leukocyte antigen (HLA) class I molecule mutation. Loss of HLA class I correlate with the grade of tumor and show little response to immunotherapy. NK cells do not have a histocompatibility complex (MHC) restriction. In patients with GBM, the NK cells are depressed, and it has been observed that when NK cells increase there is tumor regression in a recurrent glioma[23]. Glioblastoma stem cells suppress T cell responses in different ways: producing immunosuppressive cytokine that suppress T cell responses and inducing regulatory T cells, which act as a brake on the immune response and eliminate T cells through apoptosis. This is accomplished through the immunosuppressive protein B7-H1 from stem cells, or soluble galectin-3[24]. Gamma-delta T cells (γδ T-cells) are the primary effector cells in the immune response of a high grade glioma[25].

In order to modify the immune response in gliomas, the quantity of Tregs, a subclass of lymphocytes with immunosuppressive properties, is increased. It has been noted that indoleamine 2,3-dioxygenase (IDO), which converts tryptophan to kynurenine, increases the activity of Treg, and could be modified by aciclovir[27]. Also, in order to reduce Tregs and improved antitumoral immunity in other tumors, denileukin diftitox is used, which is a recombinant fusion protein of IL-2 and the diphtheria toxin targeting IL-2 receptors (CD25)[28].

Transfer factors are dialyzable products of low molecular weight extracted from the cells involved in the immune system. It has been reported that the transfer factor, in combination with carmustine in experimental malignant glioma, reduces the tumor and increases the CD2+ CD4+, CD8+, NK lymphocytes, and apoptotic tumor cells[33]. γδ T-cells recognize unprocessed nonpeptide compounds known as phospho-antigens and are involved through the mevalonate pathway or 1-deoxy-D-xylulose-5-phosphate, in activating the cytotoxic response and releasing cytokine and chemokines[34,35]. γδ T-cells activation can be induced in vivo by molecules such as zoledronic acid, which induce the accumulation of the T cell Vγ2. The zoledronic acid induces an effective antitumor response. Aminobisphosphonates play dual roles, apparently acting directly against GBM cells and enhancing antitumor activity from Vγ2 T-cells, which is present up to 75% in γδ T-cells[36]. Otherwise bisphosphonates, such as alendronate, increase γδ T-cell activation by interaction with monocytes circulating or macrophage associated tissues[37].

INHIBITION OF SIGNALING WITH ANTIBODIES AND KINASE INHIBITORS

Heterogeneity in glioblastoma suggests that no therapy can be generalized in different types of GBM. In neural/classical type GBM there are mutations in the epidermal growth factor receptor (EGFR) gene. In proneural type GBM frequent mutations occur in p53, in platelet-derived growth factor receptor A, and in isocitrate dehydrogenase 1. Mesenchymal type GBM causes frequent mutation, observed in neurofibromatosis type 1 gene (NF-1)[39].

In neural/classical type GBM, Nimotuzumab could be used, it is a humanized antibody that recognizes EGFR[40] or panitumumab, originally approved for treating colorectal cancer, and it has been used with good results in glioma[41]. In proneural types which have IDH1 mutation, bevacizumab[42] could be used. Bevacizumab is a humanized monoclonal IgG1 antibody that selectively binds with great affinity to human vascular endothelial growth factor. This antibody is being used in phase III randomized trials in combination with temozolomide and radiotherapy, and has also been reported to be of benefit in phase II studies in recurrent glioblastoma [43]. In mesenchymal type NF-1, therapeutic targets use Ras antagonists and ERK antagonists. Also, mTOR dysregulation and PI3K/PKB/mTOR are central regulators of cell proliferation, growth, differentiation, and survival[44], they could logically be used with resveratrol or quercetin[45]. Treatment with low doses of resveratrol inhibits mono-ubiquitination of histone H2B at K120 in senescent glioma cells[46]. Resveratrol reduces TNF-α induced NF-κB, and reduces the effect of urokinase plasminogen activator[47]. Resveratrol acts over topoisomerase II on one of the enzymes found in highly proliferating cells[48]. Quercetin causes a rapid reduction in phosphorylation regulated to kinase (ERK) and Akt signaling. With quercetin the death of human glioma cells is brought about with a mechanism that involves caspase-dependent down-regulation of ERK, Akt, and survivin[49].

Considering that there is a poor immune response to tumor associated antigens (TAAs) various strategies have been proposed to increase the immune response. Amongst them are new experimental options for treatment, for example, cytokine like IL-4, which facilitates an immune response against glioma[52] in a similar way to toll-like receptor (TLR) agonists. One example of this TLR agonist is Imiquimod, which could enhance T-cell responses to intracranial tumors, apart from reducing the number CD4(+)Foxp3(+) cells[53]. Costimulation of B7 molecule[54], blocks the B7-H1/PD-1 pathway with antagonistic antibodies to protect T cell responses[55].

Most immunotherapy attempts have had limited clinical success, with the exception of cellular immunotherapy using dendritic cell vaccines[56]. The multi-epitope-pulsed dendritic cell vaccine can be used for treatment. Dendritic cells are the most potent antigen-presenting cells for naive T cells, and can be obtained ex vivo from blood monocytes[57]. Monocytes are matured with the granulocyte-macrophage colony-stimulating factor (GM-CSF) and IL-4, or IL-6, prostaglandin E2 (PGE2), IL-1β and the TNF-α[58], to obtain denditric cells. Mature DC (mDC) induces antigen-specific T-cell responses when mDC is pulsed with tumor lysate, cancer stem cells, or peptides from TAAs, as reported by Phuphanich et al[59]. These pulsed dendritic cells increase the immune response against tumor cells[59]. Amongst the various TAAs used for pulsed cells are antigens from gliomas or cancer stem cells which are HER2/N, TRP-2, AIM-2 or peptides.

It is more effective if multiple epitopes are used to target and enhance cancer vaccines[60]. The peptides used in the autologous vaccine mDC, could be a combination of peptides, for example, six synthetic class I peptides AIM-2, MAGE1, TRP-2, gp100, HER2/neu, and IL-13Ra2. These were named ICT-107 and were selected from a glioma[58]. This combination of enhanced epitopes is clearly recognised by HLA class I-restricted T cells. This multi-epitope-pulsed dendritic cell vaccine can be administered intradermally at multiple sites.

In the treatment of patients with glioblastoma the use of many forms of therapeutic drugs could cause three main reactions, firstly increasing the brain edema which was a problem for the patient. Secondly, it is believed that brain tumor capillaries could limit the delivery of therapeutic drugs to the brain, and finally, the sum of many therapeutic drugs may easily lead an elderly patient into a delirious state.

There are many regulatory edema molecules in the brain. In the environment of the brain tumor, PGE2, aquaporins, aquaporin 1 (AQP1) and 4 (AQP4) exist. The glioma that infiltrate microglia are an important source of PGE2 and Cox-2, so Cox-2 inhibitors are proposed as an alternative to the use of glucocorticoids in peritumoral edema of malignant gliomas[15].

In short, in order to improve the quality of life in elderly patients with brain tumors, such as glioblastoma, many new treatment options should now be tested.