We report a case of virus-induced acute respiratory distress syndrome (ARDS) treated with parenteral vitamin C in a patient testing positive for enterovirus/rhinovirus on viral screening. This report outlines the first use of high dose intravenous vitamin C as an interventional therapy for ARDS, resulting from enterovirus/rhinovirus respiratory infection. From very significant preclinical research performed at Virginia Commonwealth University with vitamin C and with the very positive results of a previously performed phase I safety trial infusing high dose vitamin C intravenously into patients with severe sepsis, we reasoned that infusing identical dosing to a patient with ARDS from viral infection would be therapeutic. We report here the case of a 20-year-old, previously healthy, female who contracted respiratory enterovirus/rhinovirus infection that led to acute lung injury and rapidly to ARDS. She contracted the infection in central Italy while on an 8-d spring break from college. During a return flight to the United States, she developed increasing dyspnea and hypoxemia that rapidly developed into acute lung injury that led to ARDS. When support with mechanical ventilation failed, extracorporeal membrane oxygenation (ECMO) was initiated. Twelve hours following ECMO initiation, high dose intravenous vitamin C was begun. The patient’s recovery was rapid. ECMO and mechanical ventilation were discontinued by day-7 and the patient recovered with no long-term ARDS sequelae. Infusing high dose intravenous vitamin C into this patient with virus-induced ARDS was associated with rapid resolution of lung injury with no evidence of post-ARDS fibroproliferative sequelae. Intravenous vitamin C as a treatment for ARDS may open a new era of therapy for ARDS from many causes.

Core tip: Enterovirus/rhinovirus has been reported to cause devastating acute lung injury. We report here the first use of high dose intravenous vitamin C to attenuate the acute respiratory distress syndrome that was caused by this viral infection. We have previously reported that vitamin C used in this interventional fashion is a potent anti-inflammatory agent.

Viral diseases can produce the acute respiratory distress syndrome (ARDS)[1]. Pandemic viruses are the most common viruses that produce lung injury. Influenza viruses and coronaviruses (e.g., H5N1, H1N1 2009, severe acute respiratory syndrome coronavirus, and middle east respiratory syndrome coronavirus) are potentially lethal pathogens known to produce lung injury and death from ARDS[2-5]. At the tissue level, lung injury results from increased permeability of the alveolar-capillary membrane that leads to hypoxia, pulmonary edema, and intense cellular infiltration, particularly neutrophilic infiltration. The exact pathogenesis of virus-induced ARDS is slowly becoming understood. Unlike the “cytokine storm” occurring in bacterial sepsis that leads to up-regulation of pro-inflammatory cytokines [e.g., interleukin-1β (IL-1β), IL-8, IL-6] and generation of reactive nitrogen and oxygen species in the vascular space, viruses such as the influenza virus target alveolar epithelium, disabling sodium pump activity, damaging tight junctions, and inducing cell death in infected cells. Cytokines produced by virally infected alveolar epithelial cells activate adjacent lung capillary endothelial cells which then leads to neutrophil infiltration. Subsequent production of reactive oxygen and nitrogen species by infiltrating neutrophils further damages lung barrier function[1]. Apart from pandemic viruses other viruses, are increasingly reported to produce severe ARDS. While most of the approximately 100 strains of enterovirus primarily infect the gastrointestinal tract, enterovirus-D68 (EV-D68) has tropism for the respiratory tract. EV-D68 produces acute respiratory disease ranging from mild upper respiratory tract symptoms to severe pneumonia and lung injury as in the case we describe here. In an outpatient setting, EV-D68 disease has manifested most commonly among persons younger than 20 years and adults aged 50-59 years[6]. In August 2014, EV-D68 emerged as a cause of severe respiratory infections with hospitals in Illinois and Missouri reporting an increased incidence of rhinovirus and enterovirus infection[7]. In this report, 30 of 36 isolates from the nasopharyngeal secretions of patients with severe respiratory illness were identified as EV-D68. Following these reports, an unusually high number of patients with severe respiratory illness were admitted to these facilities, presumably with EV-D68 infection. Enterovirus-D68 leading to ARDS has been reported in China, Japan, and in the United States[8-11]. The report by Farrell et al[11], describes a previously healthy 26-year-old woman who developed severe ARDS following an enterovirus-D68 infection. Despite all critical care support measures, the patient required protracted mechanical ventilation for 32-d, necessitating tracheostomy and endoscopic gastrostomy tube placement. She was discharged alive 55 d following admission. Enterovirus and rhinovirus were recovered from the respiratory secretions of the patient we report here. Extracorporeal membrane oxygenation was rapidly required in our patient’s care following failure of conventional mechanical ventilation. The patient reported by Farrell et al[11] is the full extent of support required for patients with ARDS who ultimately develop a fibroproliferative course as described by Burnham et al[12]. Karhu et al[13] and Choi et al[14] recently reported finding rhinovirus as the etiology of severe community acquired pneumonia and respiratory failure in mechanically ventilated adults who had a proven viral etiology of respiratory failure.

A 20-year-old white female presented to urgent care with 24 h of increasing dyspnea after returning from a 7-d trip to Italy. While in Italy she was exposed to several members of the family with whom she was visiting who had symptoms of upper tract respiratory infection. One family member had recently traveled to Morocco. While in Italy, the patient had visited a buffalo farm and ate unpasteurized cheese. There were no other unusual exposures. She noted cough and yellow sputum for 3 d with intermittent fever and night sweats. 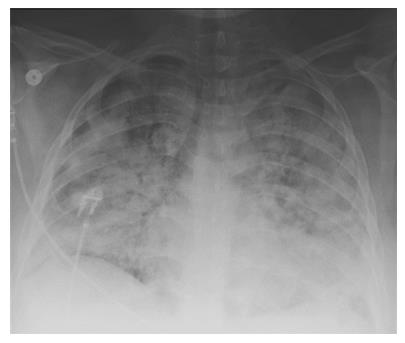 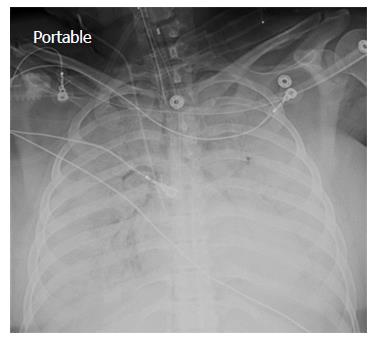 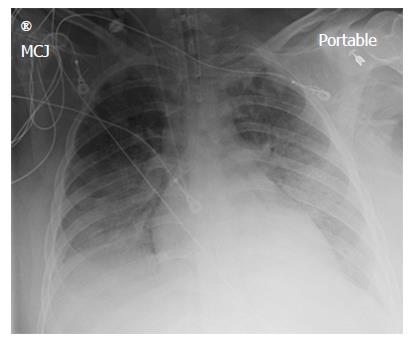 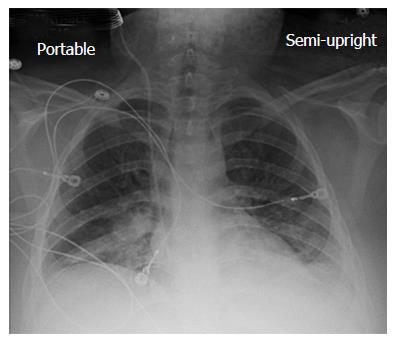 In conclusion, we report here the first use of vitamin C as an interventional drug to attenuate lung injury produced by viral infection. The patient described here was discharged home 12 d following hospitalization, requiring no oxygen therapy. Follow-up exam at 1 mo following the patient’s initial hospitalization revealed her to have completely recovered. Figure 5 displays her follow-up chest X-ray film. Importantly, it should be noted that this is a single case report. The role of Vitamin C in this patient’s recovery is not certain, and clearly additional investigation will be required before this can be recommended as a therapy for ARDS. 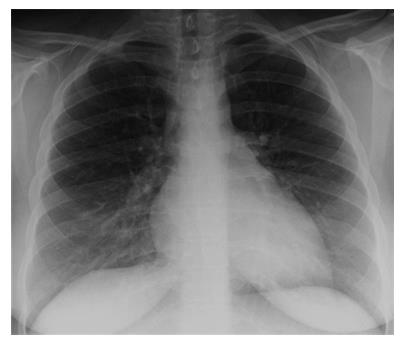 The authors are grateful to Virginia Commonwealth University Medical Center in Richmond, Virginia, the Divisions of Medical, Surgical, and Anesthesia Critical Care Medicine, Richmond, Virginia, United States. The pre-clinical work that led up to the use of vitamin C as an interventional agent in humans was supported by the Aubrey Sage McFarlane acute lung injury fund, the VCU Johnson Center for Critical Care and Pulmonary Research.

A 20-year-old female with no significant medical history presented with acute respiratory failure following a spring break in central Italy. While in Italy she was exposed to a sick contact who was a member of the family she was staying with.

The clinical diagnosis of severe acute respiratory distress syndrome (ARDS) in this case was established by the extent of respiratory failure present, the radiographic findings, and the need for extracorporeal membrane oxygenator support required. The patient’s exposure to the sick contact in Italy suggested the diagnosis of a viral etiology.

The diagnosis of the etiology of the patient’s respiratory failure was obtained by a panel that uses real-time polymerase chain reaction technology to identify respiratory viral pathogens. FilmArray Respiratory panel is manufactured by BioFire Diagnostics, LLC, Salt Lake City, Utah.

No lung tissue was obtained from the patient. The diagnosis of ARDS was established by the extent of respiratory failure and the imaging required during the patients hospital stay.

In this case report, the authors describe the first use of high dosage intravenous vitamin C as adjunctive therapy for viral induced ARDS.

At this point in time, there are no other case reports specifically referencing vitamin C as a treatment for ARDS. The authors have previously reported (ref. [18]) the use of high dose vitamin C as an adjunctive therapy for severe sepsis. Many patients in that trial likely could be considered to have had ARDS.

For many years multiple investigators have conducted clinical treatment trials, searching for effective therapies to assist in the treatment for ARDS. In this case report, the authors may have shed new light on a treatment which may ultimately be effective. The successful outcome described in this case report would suggest that larger trials must be conducted with high dosage intravenous vitamin C.

This is an interesting report of use of high dose intravenous vitamin C in ARDS.