Core tip: Patients with pneumothorax related to mechanical ventilation (PRMV) have a high mortality rate. PRMV often occurs in the early stage of mechanical ventilation and it may recur on the other side of lung in a short period of time. Low compliance is associated with a high incidence of PRMV, with PRMV being more related to the underlying process than the ventilatory setting. PRMV patients with tension pneumothorax, higher acute physiology and chronic health evaluation score or PaO2/FiO2 < 200 mmHg have a higher mortality.

Pneumothorax, defined as the presence of air in the pleural space, is a serious complication of mechanical ventilation and is associated with increased morbidity and mortality[1,2]. Pneumothorax can be categorized as primary, secondary, iatrogenic or traumatic according to etiology. Mechanical ventilation was found to be the common cause of iatrogenic pneumothorax in an intensive care unit (ICU)[3]. Pneumothorax is rare in intubated patients with normal lungs and most patients with pneumothorax related to mechanical ventilation (PRMV) have underlying lung diseases that range from primary obstructive lung disease to secondary pneumonia and acute respiratory distress syndrome (ARDS)[4-6]. In critical illness, pneumothoraces may be difficult to diagnose when they have different clinical presentations and their locations are atypical and complicated by other disease processes in unconscious patients[7,8]. Prompt recognition and treatment of pneumothorax is important to minimize morbidity and mortality[9] because if pneumothorax is not diagnosed quickly, once tension pneumothorax ensues, it usually has a malignant course leading to death if untreated[10]. Sudden fall in oxygen saturation followed by hypotension are often observed clinically in these patients[11,12]. Tension pneumothorax is more common in ventilated patients, occurring in 30%-97% percent of all pneumothoraces[13-17].

Patients who received mechanical ventilation have an approximate incidence of barotrauma of 4%-15%[4,13,19,25]. It has been reported that a 14%-87% incidence of pneumothorax occurs depending on severity and duration of ARDS and mode of ventilator for management[1,21,26]. A prior study found that the incidence rate of pneumothorax decreased after the implementation of protective lung strategies in pediatric patients with severe ARDS[27]. The incidence of barotrauma has been reported to be as low as 0.5% in postoperative patients[23].

Chronic obstructive pulmonary disease and asthma are also common underlying diseases associated with pneumothorax. High airway pressures are required to overcome severe bronchial obstruction. However, because of a variability of obstruction in the different airways, there is a mal-distribution of mechanical tidal volume, which promotes gas trapping and non-uniform alveolar distension. That is why these patients are at risk of pneumothorax[30].

PRMV is most closely correlated with ARDS[31], a heterogeneous disease in which the lung is physiologically small and with low compliance[32]. The dependent lung regions tend to be collapsed and the lung regions subject to high pressure overinflation and alveolar rupture are nondependent regions when positive end-expiratory pressure (PEEP) inflates and recruits some of collapsed regions during mechanical ventilation[33,34]. Subpleural and intrapulmonary air cysts occur in ARDS patients and the rupture of these air cysts may be a cause of pneumothorax[14]. Whether the pneumothorax in ARDS arises from overinflation of normal lung regions or from cyst rupture has not yet been conclusively established[21].

PATHOPHYSIOLOGY AND RISK FACTORS FOR PRMV

An early investigation reported that peak airway pressure over 50 cm H2O is associated with increased risk of alveolar rupture during mechanical ventilation[4]. There have also been correlations made between high peak airway pressure and the development of pneumothorax[15,36]. High PEEP had been reported to be associated with pneumothorax[1] but several studies have found no such relationship[15,17,23,28,37]. Increased pressure is not enough by itself to produce alveolar rupture, with some studies demonstrating that pneumothorax is related to high tidal volume[37]. In animal studies, there is evidence to conclude that lung overdistension rather than high airway pressure is the primary cause of alveolar and interstitial injury[38,39].

A clinical study showed that when plateau pressure was maintained lower than 35 cm H2O, pneumothorax was unavoidable[40]. Although one study showed that the incidence of pneumothorax decreased after implementation of protective lung strategies[27], several recent studies comparing low tidal volume with conventional ventilation in ARDS failed to demonstrate any reduction in barotrauma when low tidal volumes were used[41-43]. Previous literature showed the incidence of barotrauma did not relate to the ventilatory settings[22,31,41,44] but a low compliance was associated with a high incidence of barotrauma, which suggested that barotrauma has been more related to the underlying process than the ventilatory setting[40].

Pneumothorax is secondary to ruptured alveoli and dissection of air along the vascular sheaths passing to the mediastinum, subcutaneous tissue and retroperitoneum. Therefore, it may manifest as pulmonary interstitial emphysema, pneumomediastinum, pneumoperitoneum or subcutaneous emphysema[32]. Patients may present with tachycardia, chest pain, tachypnea, agitation, hypotension, cyanosis or consciousness change. Tachycardia is the most common finding.

The diagnosis of pneumothorax in critical illness is established from patients’ history, physical examination and radiological investigation. The factors related to the underlying lung disease are important in the history. Examination of the respiratory and cardiovascular systems may help establish the diagnosis of pneumothorax. However, examination findings may vary according to the size of pneumothorax and presence of limited cardiorespiratory reserve[47], with patients with a small pneumothorax (one involving < 15% of the hemithorax) possibly having a normal physical examination. Careful inspection and repeated auscultation of the chest is therefore crucial. Contralateral tracheal deviation, hyperresonant percussion over the chest and decreased breathing sounds might be noted. Reduction in tidal volume during pressure controlled ventilation and increased airway pressure with volume controlled ventilation might be found from ventilators. A pulsus paradoxus on the arterial trace and increased central venous pressure from central venous catheterization may be observed[8,9,46,47].

It should be noted that many of the above findings are nonspecific and have not been a reliable indicator of pneumothorax given that dyspnea severity can be out of proportion to the size of the pneumothorax. The radiographic data thus remains the gold standard for the diagnosis of pneumothorax[8]. The chest radiograph may show radiolucent hemithorax with apparent lung edge and absent lung marking. Mediastinal emphysema was the initial manifestation of extra-alveolar air[1]. Although an erect posteroanterior chest radiograph may help to estimate the pneumothorax size[48], it is not practical in critical illness. However, the supine anteroposterior chest radiographs are available in the ICU, although the appearances of a pneumothorax on a supine radiograph may be different from the classic appearances on an erect radiograph. Air may lie in the costophrenic angle extending more inferiorly than usual (Figure 1A), which has been called deep sulcus sign[49]. Concurrent lung disease may lead to different distributions of free air in the pleural space than in relatively normal lungs[50] or it may lead to loculated gas collections if there is associated pleural disease[51]. Some radiographic findings that may be confused with pneumothorax are skin folds, visceral gas within the gas and emphysema bullae. A chest computed tomography (CT) examination, in contrast, can differentiate these diagnoses and is the gold standard test for both the diagnosis and sizing of pneumothorax (Figure 1B)[52]. CT is an excellent tool to differentiate bullous lung disease and prevent unnecessary drainage attempts that may result in the creation of a parenchymal-pleural fistula[53]. Chest radiographs may not distinguish between emphysematous bullae and pneumothorax, thus possibly resulting in potentially catastrophic insertion of intercostal chest drain into emphysematous bullae in mechanically ventilated patients. Unfortunately, it is not always practical or safe to transport critically ill patients for a CT scan to exclude pneumothorax, particularly when the patient is hemodynamically unstable.

Figure 1 A chest radiograph demonstrates (A) and computed tomography (B) right pneumothorax (arrows). Air may lie in the costophrenic angle extending more inferiorly than usual (A, arrow).

Transthoracic sonography is a diagnostic tool for pneumothorax[54-56]. There are several advantages of ultrasonography over standard chest radiography and CT scanning, including the lower radiation, portability, real-time imaging and the ability to easily perform dynamic and repeat evaluation. The main use of ultrasonography for assessment of pneumothorax lies in its capacity to rule out a pneumothorax. Respiration-dependent movement of the visceral pleura and lung surface with respect to the parietal pleura and chest wall can be easily visualized with real-time transthoracic sonography. This characteristic is known as lung sliding or gliding sign[56-58]. At the boundary between the pleura and the ventilated lung, intensive band-like reverberation echoes (comet-tail artifacts) are evoked during breathing movement[54,57]. M-mode images of patients without pneumothorax show breath-dependent movements as a single, thin comet-tail artifact. The presence of air in the pleural space prevents sonographic visualization of visceral pleura movements and the gliding sign and comet-tail artifacts disappear[57,58]. M-mode images of patients with pneumothorax show the immobility of these artifacts known as frozen echoes under breathing movement.

Most mechanically ventilated patients with a pneumothorax require tube thoracostomy placement because of the high risk of tension pneumothorax[61]. The strategy of managing pneumothorax is shown in Figure 2. It is not advisable to wait for a radiograph if there are clinical signs of a tension pneumothorax. Emergency needle decompression followed by tube thoracostomy is widely advocated[46]. In critically ill patients with minimal pulmonary reserve, even a small pneumothorax can have adverse cardiopulmonary effects[62]. Positive pressure ventilation can exacerbate air leaks and prevent pleural healing, potentially causing a rapid increase in the size and severity of existing pneumothorax. 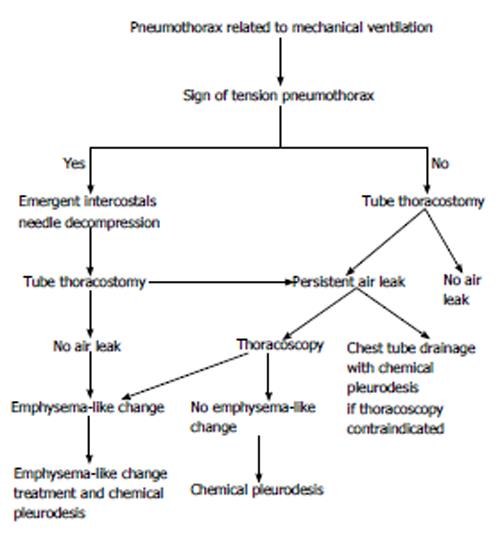 Figure 2 An algorithmic approach to treatment of pneumothorax related to mechanical ventilation.

The traditional treatment for pneumothorax in mechanically ventilated patients has been chest tube thoracostomy[61], an image-guided small catheter whose size ranges from 7 to 10 Fr, to become an effective therapeutic option for pneumothorax[63]. A retrospective review of 62 ventilated patients who underwent small-bore chest tube drainage as the primary management of pneumothorax found a 68.6% success rate, defined as no residual air seen in the follow-up chest radiograph, and with no major complications[64]. These results compare favorably with previous data showing a success rate of 55% with the same definition for success as in the previous study with a large bore tube[20].

In patients with a persistent air leak or failure of the lung to expand, early thoracic surgical consultation is generally requested within 3-5 d[65]. Although surgical intervention is considered very effective and safe with a low recurrence rate, the studies reaching this conclusion do not include critically ill patients[66,67].

Muscle relaxants might be effective to decrease the incidence of pneumothorax for patients with ARDS. A recent study by Papazian et al[68] reported a significant reduction in pneumothoraces in patients with severe ARDS who received 48 h of paralysis.

Pneumothorax is a medical emergency and a disease with a high mortality rate; it requires a careful awareness, prompt recognition and intervention to reduce morbidity and mortality. Most patients with PRMV have underlying pulmonary diseases, the most common of which are pneumonia, ARDS and obstructive lung disease. Pneumothorax presentation and radiographic findings may be subtle or atypical. Whereas a CT scan is the gold standard for diagnosis, the use of ultrasonography has benefits in both diagnosis and management of pneumothorax. Most of the ventilated patients with a pneumothorax require immediate treatment with tube thoracostomy because of the high risk of progression to a tension pneumothorax. Small-bore catheters are now preferred in the majority of ventilated patients.