Article-Type of This Article
Therapeutics Advances

Oncoplastic breast conserving surgery is the gold standard approach for the surgical treatment of early breast cancer. There is a well defined technique named “therapeutic mammoplasty” which is characterized for using a reduction mammaplasty technique to treat breast cancer conservatively. In our current practice, “therapeutic mammoplasty” or therapeutic reduction mammaplasty is our favorite oncoplastic breast conserving approach which it used in almost half of our patients. This technique is very versatile allows us the resection of tumors located in all breast quadrants of patients with moderate-to large-sized breasts. We describe a series of 57 patients who were treated using a therapeutic reduction mammaplasty. All surgical procedures were carried out by one comprehensive breast surgeon who planned and designed the surgery performing both oncologic and reconstructive procedures. Surgical margins were insufficient in eight patients (14%). Nine patients (15.8%) had a complication in early postoperative period and in one of them adjuvant radiotherapy was delayed four months due to a wound dehiscence. The rate of synchronous contralateral symmetrization was 31.6%. Our conclusion is that reduction mammaplasty is a useful and safe skill to treat breast cancer conservatively playing a very important role therefore it must be situated in the priority of learning objectives.

Core tip: Reduction mammaplasty techniques are a really useful and safe skills to treat breast cancer conservatively allowing breast surgeons manage tumors located in all breast quadrants with low morbidity in moderate to large breasted patients, thanks their versatility they play a very important role in oncoplastic conservative surgery therefore they must be situated in the priority of learning objectives.

Currently, oncoplastic breast conserving surgery (OBCS) should be the gold standard approach for the surgical treatment of early breast cancer[1-3]. Oncoplastic techniques (OT) offer clear advantages on nearly forty percent of patients in who common breast conserving treatment (BCT) (surgery plus radiotherapy) are followed by cosmetic sequelaes[4] besides the rest of the patients who also could be benefited from many surgical tricks which can improve aesthetic outcomes[5]. Since 1998, when Audretsch et al[6] described the use of plastic surgery techniques to reshape the breast at the time of lumpectomy or quadrantectomy introducing the term “oncoplastic”, it has passed enough time to be able to evaluate long-term oncologic outcomes, therefore a meta-analysis gathering 3165 patients treated by OBCS vs 5494 treated BCT have demonstrated that OBCS obtain similar results to standard breast conserving surgery improving cosmetic outcome and patients’ satisfaction[7].

There is a large amount of OT but these can be classified in two main groups: Volume replacement or displacement techniques. Nowadays, the last ones, which are more frequently used[8], have a broad technical variety with different patters incisions, pedicles used for nipple areola complex (NAC) movement, ways to fill tumor removal defect and their multiple combinations. Several authors[9-13] have created different algorithms attempting to optimize OT and offering us a method to select the most appropriate OT in each patient. These algorithms for immediate conservative surgery reconstruction are based on some aspects such as type and size of the breast, extent of tumor removal defect, ptosis degree, breast tissue density and location of the tumor in the breast. Other aspects very important in the process of decision are patient preferences and surgeon expertise.

In OT displacement volume group there is well defined technique a “therapeutic mammoplasty” term coined by McCulley et al[14,15] which is characterized for using a reduction mammaplasty technique and radiotherapy to treat breast cancer. These authors described two different scenarios depending if the tumor lies or not within the routine pattern incision and excision dividing the breast in nine areas with theirs corresponding approaches. Therapeutic mammaplasty is especially useful in large breasted patients in who a bilateral reduction mammaplasty offers clear advantages which are both oncological and functional which cause better radiation therapy and beside relieving the symptoms related to breast hypertrophy thus improves quality of life[16], even more, this approach is a better option than skin-sparing total mastectomy and immediate reconstruction having lower morbidity and more favorable cosmesis[17].

Munhoz et al[18], wrote that the main advantages of the therapeutic reduction mammaplasty (TRM) should include reproducibility, low interference with oncological treatment and long-term results. We agree completely with him and it is more, based on our experience, we would like to add that this technique is versatile because it could be used to treat tumors located in all breast quadrants with the condition that the patient having a moderate to large-sized breast.

The aim of this work was to communicate our experience with TRM showing the distribution of tumors into the breast, rate of affected margins, early surgical complications, and synchronous contralateral breast symmetrization.

Between 2005 and 2013, 57 patients suffering from breast cancer suitable for BCT underwent TRM at our Oncoplastic Breast Unit, Hospital Valdecilla (Santander, Spain). All surgical procedures were carried out by one comprehensive breast surgeon (FH) who planned and designed the surgery performing both oncologic and reconstructive procedures. Data from patient and tumor characteristics, surgical procedures, early complications and pathological study were prospectively collected and stored in IBM SPSS statistics program.

Characteristic of patients and tumours are described in Tables 1 and 2. Seven patients were treated before surgery with neoadjuvant chemotherapy. Most of tumor excisions were guided by needle-wires (84.2%) according to our method previously published[19]; wires were inserted 1 cm distant to radiologic tumors limits as markers of optimal limit resection, sufficiently of resection margins was per-operatively tested by X-ray analysis of surgical specimen. Biopsy of sentinel lymph node (49) and axillary linfadenectomy (10) was performed in mostly patients by the T inverted pattern incision. Opposite breast surgery by reduction mammaplasty was carried out in eighteen patients (31.6%).

Nine patients (15.8%) had a complication in early postoperative period (five a hematoma, four a minor wound dehiscence) and three of them had to be re-operated for evacuating a hematoma. There were no major complications such necrosis of NAC or severe breast infections and only one adjuvant radiotherapy was delayed four months in one patient due to a wound dehiscence.

Although some OT are specifically useful to manage some determined tumor locations such as a lateral or tennis racket mammaplasty[20] for tumors located at upper outer quadrant or LIQ-V mammaplasties[21] for these located at lower inner quadrants, reduction mammaplasty with T inverted pattern incision appropriately adapted is be able to treat tumors situated at all breast quadrants. In a very large series of 540 consecutive cases published by Fitoussi et al[22] in which a variety of OT were used, T inverted pattern incision was the most frequently utilized in 40% of patients. Our current BCT entails 77.2% of breast cancer surgery and in oncoplatic breast conserving experience using volume displacement technique this pattern incision is the most common (Figure 1) used in 52% of cases, and our favorite approach (unpublished data). 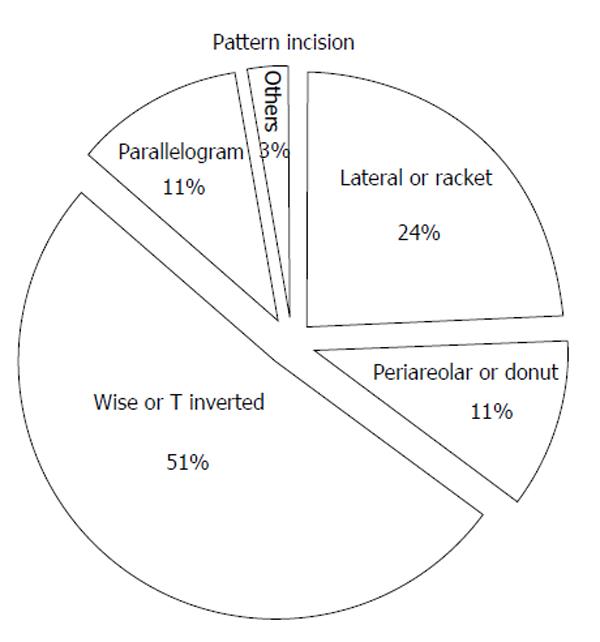 As inner quadrants were the less frequent tumor localizations with 10.6% and the outer ones were the most frequent our first choice to move NAC was a superomedial pedicle but in this series we also used inferior and bipedicled ones. In those patients with central tumors in who NAC had to be removed we reconstructed NAC using different techniques, for example, contralateral areola (Figure 2) or skin graft plus arrow flap for nipple reconstruction. The variation of localizations shows the versatility of TRM in breast with moderate or large size. 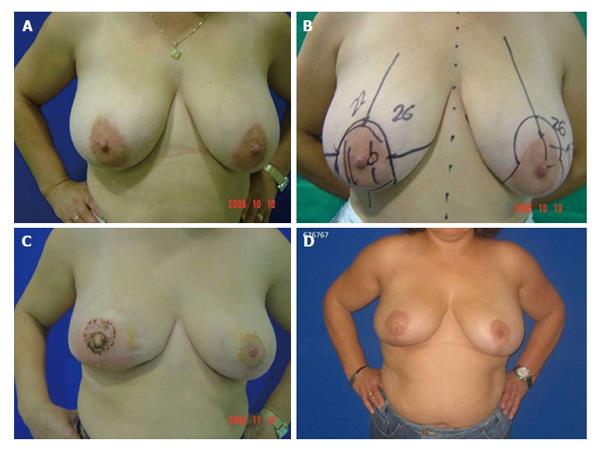 Early complications rate was 15.8%, these were minor; our experience is similar to others authors such as Gulcelik et al[23] who reported a rate of minor early complications of 16.3% and major ones of 1.9% without differences between reduction mammaplasy used for macromastia treatment and breast cancer. A wide range of complications rate of therapeutic reduction mammaplasty has been reported[24] likely due to differences in criteria and collecting data but, one conclusion is uniform that they usually are minor not impacting seriously on delivery of adjuvant therapies unless they were severe, McIntosh et al[25] in a systematic review found that delayed adjuvant treatment in only 6% of cases.

The rate of synchronous contralateral symmetrization was 31.6% but most of these patients were operated in the first half of the series before 2011; like as Fitoussi et al[22] our current preference is delayed contralateral symmetrization. The reasons for that have been clearly exposed by Kaviani et al[26] who categorized the patients in three groups: Patients unwilling any contralateral procedures, patients preferring an all-in-one operation willing immediate symmetrization and patients desiring optimal aesthetic results; only patients belonging to the second group are candidates to immediate contralateral symmetization. In our experience, our average patient is in the first group. Figure 3 shows the appearance of a patient belonging to third group with breast asymmetry which she wants it to be corrected; we will carry out symmetrization of the right breast when she stabilized her weight because she put on weight during chemotherapy treatment.

Figure 3 Appearance of a 49-year-old woman after underwent oncoplastic breast conserving surgery and posterior adjuvant chemotherapy and radiotherapy. She had a bifocal invasive lobulillar carcinoma situated at intersection of upper quadrants with positive estrogenic and progesterone receptors and T2N0M0 pathological staging. She presents breast asymmetry which she wants it to be corrected. 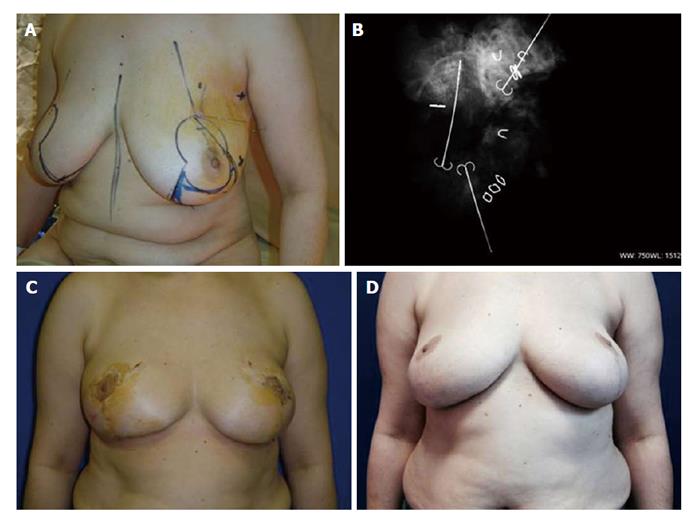 Figure 4 A 44-year-old premenopausal female with an invasive ductal carcinoma at upper outer quadrant of the left breast which sized 35 mm on mammograms who was treated with neoadjuvant chemotherapy before surgery. A therapeutic bilateral reduction mammaplasty with T inverted pattern incision and superomedial pedicle used for shifting nipple areola complex and an infero-lateral one to fill the breast defect caused by extirpation of a surgical specimen weighted 223 g was carried out. Pathological study showed a tumor size 12 mm, one negative sentinel lymph node and free surgical margins. A: Design of pattern incision with three wires inserted to guide tumor excision; B: X-ray of surgical specimen showed complete radiological removal of tumor; C: Appearance on early postoperative period; D: Long-term aesthetic outcome three years after breast conserving treatment shows both breasts with pseudotosis.

Finally, all OT and more specifically those of level II are based on the knowledge of reduction mammaplasty techniques; independently, which model for oncoplastic approach can be chosen “comprehensive breast surgeon” or “oncologic and plastic team”, skill sharing between breast unit members is eagerly desirable and, in our opinion, about reduction mammaplasty techniques the former statement is essential. Accepting the lack of oncoplastic training[27] and the fact that expertise requires long time[28], we proposed a management policy[29] to mitigate this situation incorporating the surgical treatment of symptomatic macromastia into Breast Cancer Unit[30]. One step in this direction is the inclusion of gynaecomastia and congenital asymmetry surgical treatment into several Oncoplastic Breast Surgery Units in United Kingdom.

Reduction mammaplasty technique is a useful and safe skill to treat breast cancer located in all breast quadrants with low morbidity playing a very important role in oncoplastic conservative surgery in moderate to large breasted patients therefore it must be situated in the priority of learning objectives.