AIM: To assess the use of a simple split skin graft harvesting technique, requiring only a scalpel and a swab.

METHODS: During the last 8 mo, we operated on a consecutive series of 52 patients (30 males, 22 females) with a mean age of 60 years (33-80). We used the technique we present in order to cover small skin defects. All procedures were performed under local anesthesia. Thirty-seven patients underwent bedside surgery, 8 patients were operated on in the outpatient department and the remaining 7 had their graft harvested in the operating room. After antiseptic preparation of the donor site, the margins of the graft were drawn by the use of a surgical marker. A No 15 scalpel was used for the graft elevation, under constant traction with a moist swab.

RESULTS: All procedures were completed successfully without immediate complications. The patients tolerated the procedure well. The mean operative time was 15 min. Twenty-four donor sites were left to heal by secondary intention, whereas 28 were sutured with interrupted 3/0 silk sutures in order to heal by primary intention. All 24 sites that were left to heal by secondary intention healed completely in approximately 14 d. For the sites that were sutured, the sutures were removed on the 10th postoperative day. Out of the 52 operated cases, 6 patients (11%) developed complications. In 4 patients, the split thickness skin grafts were partially lost, whereas in 2 patients the grafts were completely lost. Wound dehiscence was observed in 2 patients, which were treated with local antiseptic and antibiotic therapy.

CONCLUSION: The skin graft technique described is simple, costless and effective and can be performed even on an outpatient basis, without the need for special equipment.

The reconstruction of skin defects with the use of split thickness skin grafts (STSG) is a mainstay technique in dermatological plastic surgery[1]. We present a new simple method of harvesting split thickness skin grafts using only a surgical blade and a swab/gauze. In contrast to other techniques, the advantages of this technique include no requirement for special surgical equipment (such as a dermatome) and the simplicity of the procedure[2]. Moreover, cost is minimized as there is no need for sterilization of the dermatome or its blades.

In the last 8 mo (from February 2012 to October 2012), we used our technique in a consecutive series of 52 patients (30 males, 22 females) who required split thickness skin grafts for the covering of small defects. All procedures were performed under local anesthesia. Thirty-seven patients underwent bedside surgery, 8 patients were operated on in the outpatient department and the remaining 7 had their graft harvested in the operating room.

According to our technique, we first mark and inject local anesthetic at the donor area. Following that, the skin graft edges are elevated with a No 15 scalpel. The elevation is performed in a “shave excision” manner (Figure 1A, B). A moist swab/gauze exerts gentle traction on the raw area produced by the graft’s elevation, while the scalpel is being moved on a horizontal plane, in an oscillating fashion, in order to separate the skin from the underlining soft tissue at the level of the dermis (Figure 1C). Frequent repositioning of the moist swab is mandatory following the harvest of the skin graft (Figure 1D). The donor site can be sutured directly, as is the case following the traditional method of full thickness graft harvesting, or it can be left to heal by secondary intention. The graft is placed on the recipient site immediately after harvesting. Meshing of the graft is possible if necessary. 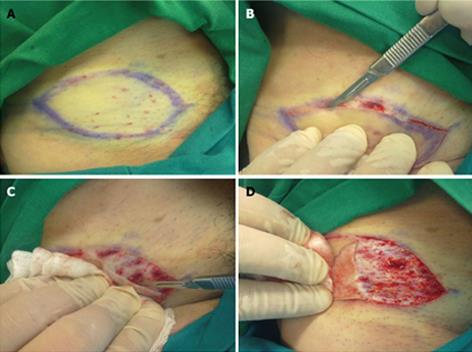 All procedures were completed successfully without immediate complications. The patients tolerated the procedure well. The mean operative time was 15 min. Twenty four donor sites were left to heal by secondary intention, whereas 28 were sutured to heal by primary intention. Forty-eight (96%) skin grafts were successfully taken on the acceptor site, whereas 4 were partially lost. The patients (4) whose grafts were partially lost were re-operated on 14 d after the initial operation following the same technique successfully. The donor sites that were left to heal by secondary intention healed in approximately two weeks. The remaining patients whose donor sites were sutured directly after the graft was harvested (primary intention donor sites) had their sutures removed on the 10th postoperative day.

Out of the 52 operated cases, 6 patients (11%) developed complications. In 4 patients, the split thickness skin grafts were partially lost, whereas in 2 patients the grafts were completely lost. Two partial wound dehiscences were treated with local antiseptic and antibiotic therapy.

All patients were followed up at the outpatient clinics of our department on the 1st, 3rd and 6th month postoperatively. All grafts were already integrated in the donor site successfully after the 1st month.

The take of a skin graft depends on the graft nutrition, which is achieved through a process of revascularization[7-10]. Two time periods of skin graft or skin substitute adherence on the recipient area have been described[11,12]. The first starts immediately after the placement of the skin graft on the skin defect and is based on serum imbibitions[13-15]. Graft adhesion is based on fibrin formation. The second period starts 24 to 48 h after the graft placement and is based on vessel formation into the graft[16,17].

During the last two decades, many different skin flap and graft transfer techniques have been developed[18,19]. Modern skin grafting research incorporates the cost parameter, as the latter represents an important factor influencing surgical planning[20,21]. The cost of surgical equipment used for split skin grafting can be minimized, especially when small defects can be treated on an outpatient basis or when the grafts can be harvested at a bedside[22,23]. Treatment of skin defects can become very expensive, especially in patients suffering with multiple burns[24-27].

We believe that the technique of split skin harvesting we describe is inexpensive, easy to perform and suitable for small skin defects. It can certainly be performed on an outpatient basis. The possible disadvantages of this technique are the fact that the skin graft thickness cannot be estimated accurately and that it is operator dependent. Moreover, we would not recommend this method for larger skin defects because the operative time would be significantly prolonged.

Split thickness skin grafts can be successfully harvested using the scalpel – gauge technique described. However, the exact thickness of the skin graft cannot be predicted, as is the case when an electrical dermatome is used. Moreover, this technique can be quite time consuming when used to cover larger skin defects which need to be operated on in an operating theater compared to the standard dermatome technique. In this study, the authors demonstrate a method which can be used to treat small and moderate defects.

Recent reports have highlighted the importance of the cost factor when planning the covering of skin defects. This study suggests a new surgical technique based on simplicity and low cost parameters with proven good results on small and moderate skin defects.

Given the fact that this new surgical technique presupposes a short learning curve, it may represent a useful and reliable tool which can be incorporated in everyday practice.

In this study, the authors presented a new surgical technique for covering skin defects, based on ease and simplicity. Theater operation time was significantly reduced since the patient can be operated on as an outpatient or “bedside” basis. The results are interesting and this technique may take its position among standard skin harvesting techniques.