In liver transplant patients, solid tumors and post-transplant lymphoproliferative disorders have emerged as significant long-term mortality causes. In addition, it is assumed that de novo malignancy after liver transplantation (LT) is the second-leading cause of death after cardiovascular complications. Well-established risk factors for post-transplant lymphoproliferative disorders and solid tumors are calcineurin inhibitors, tacrolimus, and cyclosporine, the cornerstones of all immunosuppressive therapies used after LT. The loss of immunocompetence facilitated by the host immune system due to prolonged immunosuppressive therapy leads to cancer development, including LT patients. Furthermore, various mechanisms such as bacterial dysbiosis, activation through microbe-associated molecular patterns, leaky gut, and bacterial metabolites can drive cancer-promoting liver inflammation, fibrosis, and genotoxicity. Therefore, changes in human microbiota composition may contribute further to de novo carcinogenesis associated with the severe immunosuppression after LT.

Liver transplantation (LT) is the definitive curable treatment method for patients with decompensated liver disease, cirrhosis, acute hepatic dysfunction, and hepatocellular cancer[1]. The mortality rate following LT, on the other hand, remains high. Infections and surgical complications continue to be the leading causes of death in the early post-transplantation period[2]. Furthermore, solid tumors and post-transplant lymphoproliferative disorders have arisen as a major long-term cause of death in liver transplant patients[3], where microbiota could significantly contribute. It is of great importance to underline the subtle difference between the two terms microbiome and microbiota. Microbiome is characterized as a collection of all microorganism with their belonging genetic materials in environment. On the other hand, the term microbiota is defined as an aggregation of microorganisms (bacteria, viruses, fungi) found within a specific environment. For example, gut microbiota differs from bronchial and skin microbiota, thus the origin of the microbiota is essential[4].

Dysbiosis is a condition of alterations in microbiota due to exposure to various environment factors, such as drugs, pathogens, toxins, and diet. It is well established that gut microbiota is one of the most important factors for vital functions, thus the dysbiosis may contribute to many different pathogenic disorders in the human body[5].

In transplantation settings, there is an extremely complex relationship between the immune system and the microbiome. The early post-LT period carries a risk of infectious complications due to surgical or ischemia-reperfusion injury as well as those relate to immunosuppressive (IS) treatment[6]. Furthermore, LT patients are projected to have a greater chance of contracting de novo malignancy than the general public, with standardized incidence rates ranging from 2.3 to 4.3[7,8]. Furthermore, it is thought that de novo malignancy after LT is the second-leading cause of death after cardiovascular complications, especially for smoking-induced cancers (e.g., head and neck, lung, and esophageal) and virus-induced cancers (e.g., cervical and Kaposi’s sarcoma)[9].

The aim of this paper is to provide an outline of the interaction between the immune system and microbiome after LT and the loss of immunocompetence mediated by the host immune system as a result of extended IS therapy. Although gut microbiota is essential for the host, especially in terms of metabolism and immunity, the role of the gut microbiota in disease processes, including cancer, is also increasingly unclear[10].

IS therapy and microbiota after liver transplant

In terms of the microbiota and the underlying disease (e.g., the indications of LT), the avoidance of reoccurring chronic liver diseases after LT depends primarily on the IS treatment. However, it can occur in combination with microbial dysbiosis. Additional complications that may influence the microbiome include the progression of newly occurring diabetes mellitus and other complications post-transplant by changes in host metabolic homeostasis connected to immunosuppression and related to gut microbiota. This once again indicates the incredibly complex interaction between the immune system and microbiome in transplantation settings and raises the possible strategies to induce immunotolerance and reduce the complications and mortality rate[11].

Recently, we reviewed the antibiotic changes of gut microbiota and their impact on the failure of checkpoint inhibitor treatment of colorectal carcinoma[12].

One can assume that changes in human microbiota composition may contribute further to de novo carcinogenesis associated with the severe immunosuppression after LT[13]. Indeed, the microbiome composition and function can be altered directly or indirectly by IS drugs, including chemotherapeutics, corticosteroids, biologics, etc.[14]. The research area of immunosuppression agents and gut microbiome interactions is a highly evolving topic of interest[15]. For example, dysbiosis associated with tacrolimus (TAC) is characterized by reducing the total diversity of the gut microbiota and a lack of butyrate-producing species. Furthermore, patients on TAC and mycophenolate mofetil have a distinct bacterial metagenome compared with everolimus and mycophenolate mofetil, indicating that functional variations in gut microbiota are based on the IS regimen regardless of the shift in taxonomy[16,17].

Jiang et al[18] conducted a study on liver transplanted mice in order to assess the influence of TAC dosing on the gut microbiota. They established that 30 d after LT, rats that received a dose of 0.5 mg/kg had an overabundance of Faecalibacterium prausnitzii and Bifidobacterium spp and low amount of Bacteroides-Prevotella and Enterobacteriaceae. The authors pointed out that pathogenic endotoxin-producing bacteria could be altered by administration of probiotics in the post-LT period. Therefore, the optimal IS dosages for recipients following LT is of paramount importance for maintaining microbiota balance[18].

We have to mention that this interaction is reciprocal: Microbiota can impact drug absorption and metabolism. This was observed with Lactobacillus and TAC-induced hypertension, for example[19]. Several longitudinal trials of patients after LT showed different levels of gut dysbiosis. The metabolic consequences of dysbiosis were related to the risk of disease recurrence and metabolic-associated immunosuppressants side effects. Thus, microbial therapies may be considered to reduce many of the anticipated complications[20].

An interesting study by Parrilli et al[21] explained the effect of chronic usage of cyclosporin A after LT on gastroduodenal and intestinal permeability and blood endotoxin levels in patients 2 to 3 years after LT. Their study revealed that cyclosporin A is well tolerated, and it did not carry a risk of potential substantial injury in the gut for LT patients. However, this study is limited because only 32 patients were included, thus more studies with similar designs have to be conducted[21].

Recent data showed that the microbiota could greatly affect the survival and acceptance of transplanted allographs. This supposed relationship has also become a field of increasing interest, catalyzed by advancements in methodology (e.g., -omics and depth sequencing techniques). Furthermore, microbiota and the immune system reciprocally influence each other. This is especially valid, considering that the allografts themselves harbor immune cells and/or perform immunobiological activities[14]. We present the possible mechanisms in Figure 1. Furthermore, rat models suggested that a microbiota profile or changes might predict acute rejection after transplantation[22]. As ischemia-reperfusion injury is associated with the influence of the gut microbiota on early innate immune activation, it can predict early allograft failure and long-term graft survival and is of particular significance to research[22]. Some animal studies have shown the impact of intestinal microbiota on early rejection after LT[23,24]. 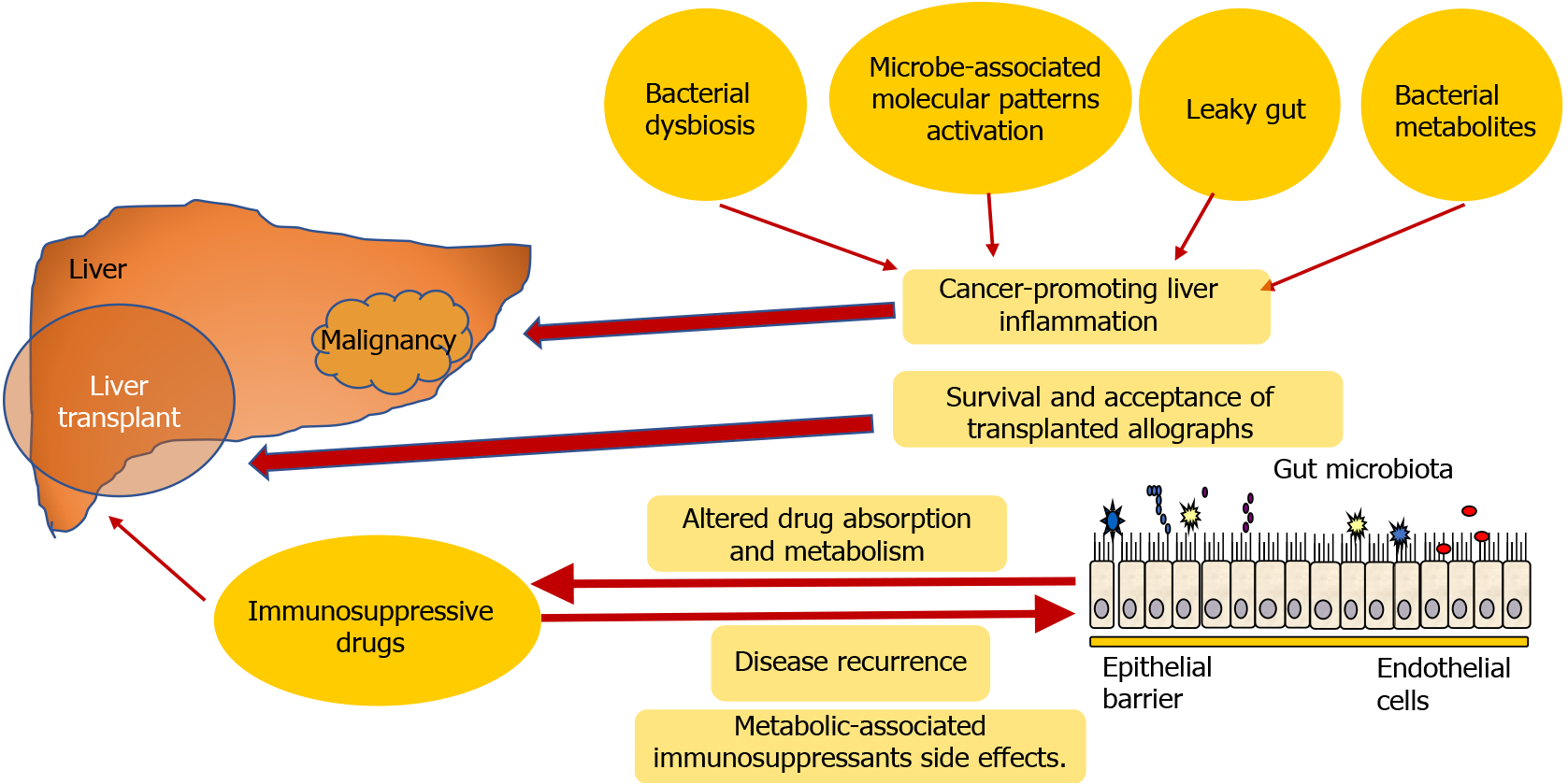 Figure 1 Alterations in intestinal microbiota were observed at various stages of liver diseases, including cirrhosis, alcoholic fatty liver disease, hepatocellular carcinoma, etc. All of the shown mechanisms can drive cancer-promoting liver inflammation, fibrosis, and genotoxicity. For example, microbe-associated molecular pattern activation (such as toll-like receptor 4 by lipopolysaccharide) contributes to the epithelial-mesenchymal transition observed in hepatocellular carcinoma. On the other hand, immunosuppressive drugs used after liver transplantation may be associated with dysbiosis, where the functional variations in gut microbiota are based on the immunosuppressive regimen regardless of the shift in taxonomy. This may further contribute to the disease recurrence and metabolic-associated immunosuppressants side effects. However, this interaction is reciprocal: Microbiota can also alter drug absorption and metabolism.

A correlation was established between acute rejection and overabundance of Bacteroides and Ruminococcus after LT[23]. Another important data from a study by Ren et al[24] demonstrated that acute cellular rejection in rats after LT is associated with increased levels of Clostridium bolteae and decreased levels of Faecalibacterum prausnitzii and Lactobacillus spp. The possible mechanism of acute rejection and changes in the human microbiome after LT remains unclear. However, a significant increase in intestinal permeability was found in rats after LT with acute rejection. Thus, further human studies need to be conducted in order to evaluate the possible interaction between the microbiome and acute rejection[6].

Furthermore, activation of the toll-like receptor 4 signaling pathways by lipopolysaccharide in Kupffer cells has been shown to contribute to compensatory hepatocyte proliferation in tumor necrosis factor- and interleukin-6-dependent cells as well as to oxidative stress and apoptosis reduction. In addition, toll-like receptor 4 activation in HCC cell lines with lipopolysaccharide causes epithelial-mesenchymal transition[27].

Sivan et al[28] published an interesting study about the potential anti-HCC tumor role of Bifidobacterium in patients after LT. In their study, they proved that administration of probiotics containing Bifidobacterium strains reduces tumor progression in a rat HCC model[28]. Taken together, these findings suggest that Bifidobacterium-based therapy can play a role in reducing the risk of recurrent HCC after transplantation.

The gut microbiome plays a critical role in controlling hepatic metabolism and immunity, and our knowledge of its effect on post-LT physiology is rapidly expanding. Therapeutic goals for microbial-based treatments will continue to develop as evidence from longitudinal studies of post-LT patients is collected, in order to enhance allograft function and reduce the risk of post-LT complications. In order to increase clinical results in post-LT patients, we hope to use microbial-based therapies in conjunction with our existing standard of care.