Buccal mucosal graft urethroplasty is the gold standard treatment for urethral stricture disease. Toowoomba has obtained a fellowship trained urethroplasty surgeon who has been performing urethroplasties for the last two years. Patient reported outcome measure (PROM) questionnaires allow for a detailed and standardized analysis of success and morbidity post urethroplasty and can be used as a reference point against which urethral surgeons can benchmark their performance.

To assess whether patient compliance rates improved with the use of an abridged PROM questionnaire.

Our database of urethroplasty patients was searched to identify patients who had completed the original PROM. This is routinely requested to be completed at the 3-, 6- and 12-mo mark. All patients are asked to complete the questionnaire and to bring it back to their next appointment. Our original PROM consists of the international prostate symptom score, the sexual health index measure and the Global Response Assessment. An abridged version of the questionnaire was derived focusing on urinary flow, sexual function and overall quality of life and consisted of three questions.

Sixty-six patients were included in our study. Fifty-four patients had been invited to complete the original PROM with an overall compliance rate of 30%. Compliance rates improved to 91% with the introduction of the modified PROM. No correlation between non-compliance and patient factors were found. There was also no significant difference in patient reported quality of life when comparing urinary flow and sexual function.

We recommend the use of PROMs pre- and post-operatively to accurately determine the level of patient satisfaction. We acknowledge the aversion of patients in completing PROMs due to the length of these questionnaires. We propose a simplistic version aimed at the “Trifecta” of urethroplasty comprising of three questions focusing each on urinary flow, sexual function and quality of life. Our modified PROM demonstrated markedly improved compliance rates and can be used as a screening tool to identify patients who might have had a poor outcome and who require a more in-depth assessment.

Core Tip: This study demonstrates the use of a modified abridged patient reported outcome measure in patients undergoing buccal mucosal graft urethroplasty for urethral strictures. A significant improvement in compliance rate was observed indicating that this modified version may be a useful screening tool to accurately evaluate patient satisfaction post-operatively.

Buccal mucosal graft urethroplasty has become the gold standard treatment for management of urethral strictures[1]. In evaluating patient outcomes from urethroplasty, patient reported outcome measures (PROMs) are utilized to fully evaluate surgical success and benchmark urethral surgeons’ performance[2]. Several stricture PROM questionnaires have been developed by combining pre-existing surveys, such as the Sexual Health Inventory for Men or the International Prostate Symptom Score (IPSS), which were not targeted at patients with urethral stricture disease[3]. These PROMs are notoriously lengthy, confusing and as such, confer poor patient compliance. Our centre observed a 20% compliance rate with the original PROM, comprising 4 validated questionnaires. This led to our development of a modified, abridged PROM focusing on the three main domains of urethroplasty surgery: Urinary flow, sexual function and quality of life. The aim of this study is to evaluate the abridged PROM for compliance.

With support from a fellowship-trained urethroplasty surgeon who has been continually employed by Toowoomba Hospital over the last 3 years (2017-2020), a prospective database was established. Firstly, a lengthy PROM questionnaire was utilized, with a retrospective analysis of this database performed to identify patients who had complied with its completion. Secondly, a modified PROM questionnaire was developed comprising of three questions. These questions were: Following your procedure, “(1) are you happy with your urinary flow; (2) are you happy with your sexual function; and (3) are you happy with your overall quality of life”? (See Figure 1). The same patients were re-contacted over the phone and asked these three questions and their results were recorded, with compliance rates compared with the original data set. 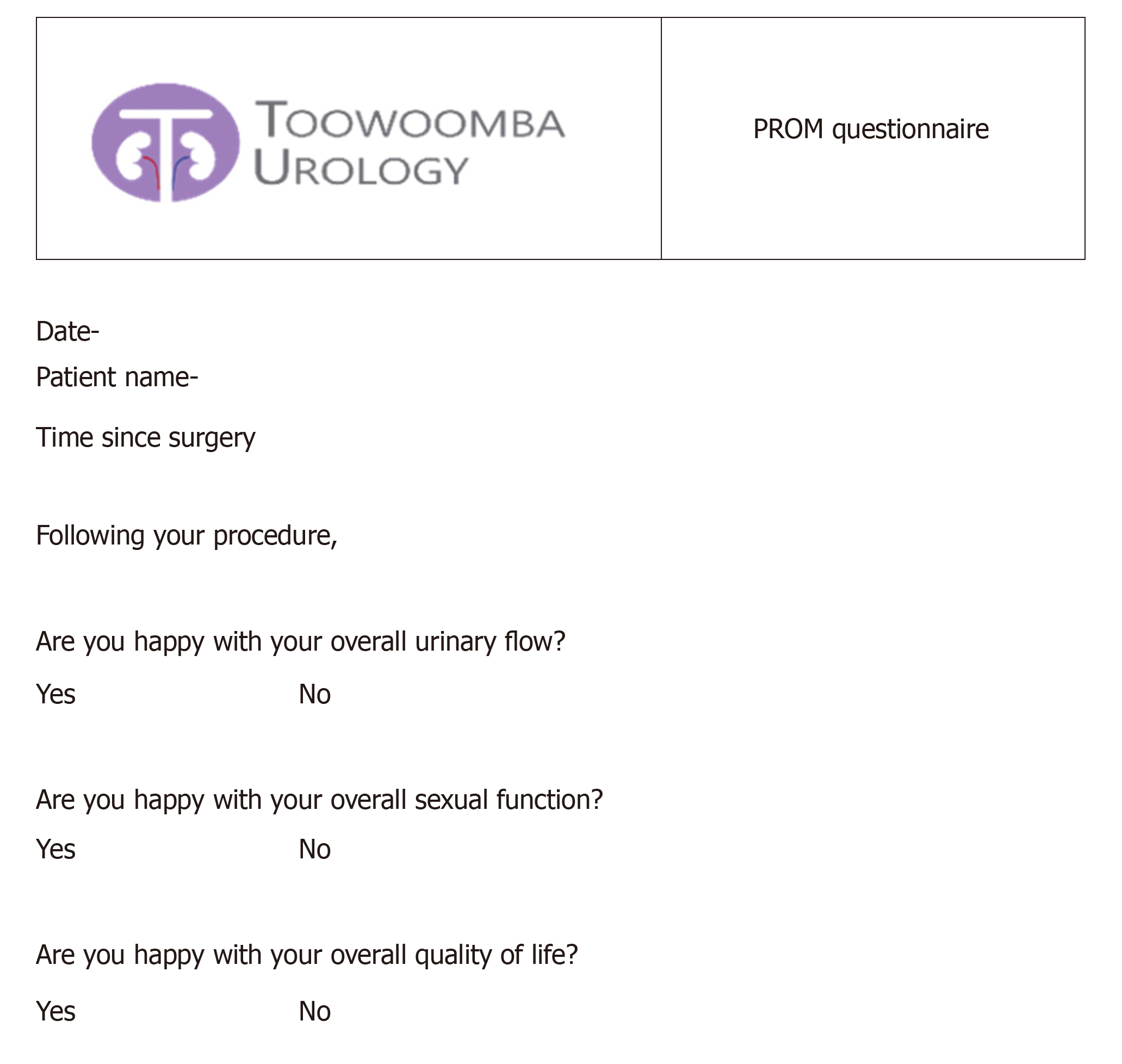 Fifty-four patients were invited to participate with the original PROM. Of these, only 16 (30%) patients fully complied with the questionnaire. For the modified PROM, improved compliance rates were observed with 60 patients (out of 66) completing the questionnaire (91%) (Figure 2). 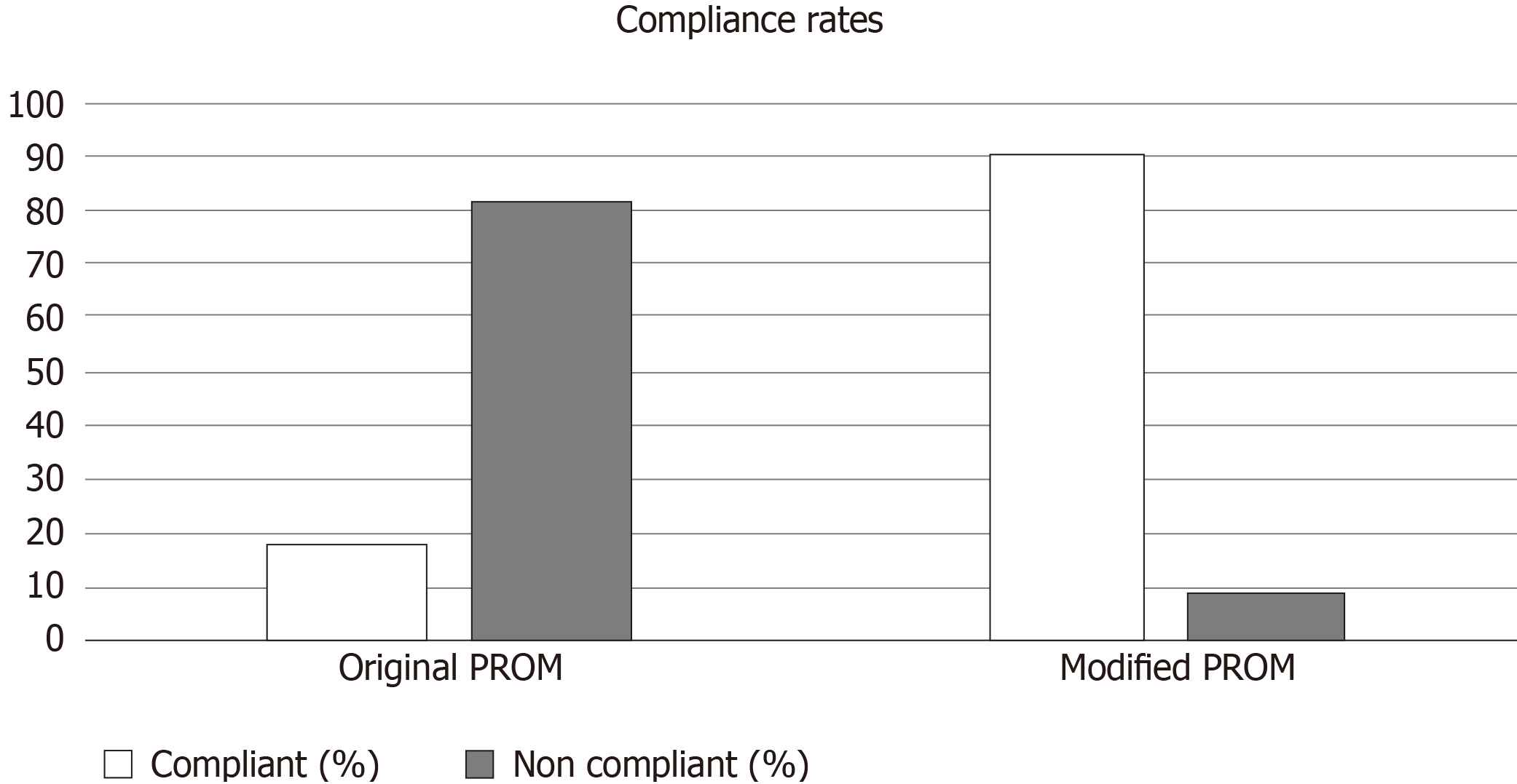 Buccal mucosal graft urethroplasty (BMGU) is a lifestyle operation and therefore patient reported questionnaires are widely used in the evaluation of urethroplasty success[4]. We advocate that PROMs should be utilized as an integral part of the pre- and post- operative process to determine the level of patient satisfaction. Soave et al[4] found that urethroplasty offered excellent outcomes in their patient cohort but found that the success rate of 78% was lower than the stricture recurrence-free survival. They emphasised the importance of a more patient-oriented evaluation to define the success of the surgery[4]. They also found that whilst the PROM does not provide evidence of surgical complications, it does provide crucial information about patient’s subjective morbidity and quality of life following BMGU[4].

Spencer et al[5] utilized patient-reported urinary and sexual outcome measures across four institutions over a minimum of 12 mo follow up however found that the main limitation of the study was the poor patient compliance which was observed in completing the questionnaires. Chung et al[6] advocated for the development of a PROM with relevant questions aimed at directly assessing the effects from the disease as well as limiting questionnaire fatigue.

A lot of the criticism against the use of PROMs post urethroplasty surgery is that the existing questionnaires are not aimed specifically at urethral stricture disease, but are mainly intended for measuring outflow obstruction secondary to prostatomegaly (i.e., IPSS)[7]. Jackson et al[8] measured the effects of the Urethral Stricture Surgery PROM: A questionnaire aimed at standardising patient-centred evaluations for urethral stricture in particular. However, poor compliance rates were again noticed with approximately 50% of patients declining to complete the PROM or were lost to follow up[8].

Our modified PROM has been aimed at highlighting capturing simple measures of the subjective morbidity “Trifecta” of urethroplasty surgery: Urinary flow, sexual function and quality of life. Whilst not in-depth questions, we advocate that it can act as a simple screening tool, easily used in the outpatient setting pre- and post-operatively in order to quickly gauge patient satisfaction in these three areas.

Our centre observed an 18% compliance rate with our original PROM comprising four validated questionnaires, which improved to 91% with our abridged version. We feel that this is because the modified PROM limits questionnaire fatigue, and identifies the key issues in relation to urethroplasty. With improved compliance rates, we may be able to obtain crucial information about patients’ perceived surgical success and quality of life.

As demonstrated by our results, patient “happiness” does not always align with perceived surgical success. Bertrand et al[9] also found that a proportion of men were dissatisfied with their procedure independent of cystoscopic appearance, as such emphasising the use of the PROM as a useful tool in measuring success after urethral reconstruction.

Our study also found that there was minimal difference in the impact of sexual function vs urinary flow on quality of life. This is likely because, as seen in previous studies on patients with benign prostatic hypertrophy, sexual dysfunction is often related to a higher symptom severity score, and with improvement in lower urinary tract symptoms, comes improvement in overall sexual satisfaction[10].

The limitations of this study include: A small patient cohort, and the inability to compare true compliance rates between the original and modified PROM, given that the modified PROM was collected at a different time point. More work needs to be done to validate our modified questionnaire and a prospective study should be performed to fully ascertain its usefulness in clinical practice. We also recognise that a briefer, abridged PROM may not necessarily be efficacious in reflecting detailed patient experiences, however we feel that this could be used as more of a screening tool to highlight patients who will require a more in-depth assessment, especially patients who have not had a good outcome. By using a screening tool with good compliance, we ensure that patient satisfaction is addressed.

In conclusion, urethroplasty is a lifestyle procedure focused on patient satisfaction with symptoms rather than objective measures of surgical success. Only by widespread implementation of such PROMs, can we objectively compare different surgical outcomes and ultimately refine techniques towards improved patient outcomes[11]. Our study demonstrated that an abridged PROM conferred a higher compliance rate and increased patient participation. Our three question PROM allows for a quick and easy screening process to identify patients who may require further investigation on the basis of their perceived dissatisfaction of urinary flow, sexual function and quality of life. We propose that this “Trifecta of Urethroplasty” can help pinpoint patient concerns easily in the outpatient setting.

Patient reported outcome measures (PROMs) are an important measure of patient satisfaction pre- and post-urethroplasty There are very few urethroplasty-specific PROMs and those that exist are usually very length and tedious to complete. It has also been shown that patients’ perceived outcomes often do not align with the conventional measures by which urethroplasty surgeons determine success and as such, lack of surgical complications does not necessarily indicate patient satisfaction.

PROMs are notoriously lengthy and tedious to complete. This results in poor patient compliance with PROMs. Given urethroplasty is predominantly a lifestyle procedure, it is important to gain an accurate sense of patient’s perceived outcomes from surgery as this will determine patient satisfaction with their quality of life. This sparked our motivation to develop an abridged PROM which focused on the Trifecta of Urethroplasty (flow, sexual function and quality of life), so as to improve patient compliance rates and thus, increase the accuracy of our PROMs.

Our aim was to apply our abridged PROM to our patient cohort and compare compliance rates with the conventional PROM which was previously used.

We performed a retrospective analysis on patients who had previously completed a conventional PROM. We then invited all patients to participate in the abridged PROM. We recorded their responses and compared compliance rates.

We found an improved patient compliance rate with the use of our abridged PROM.

We advocate the use of this abridged PROM as a screening tool to easily identify patients who may not have perceived satisfaction with their urethroplasty surgery and can therefore, be investigated further.

Abridged PROMs can be utilized pre- and post- urethroplasty to help obtain a more accurate sense of patient satisfaction and to also easily identify patients who may require further investigation, counselling or revision based on their level of satisfaction with their surgery. Future research should be performed to validate abridged, urethroplasty-specific PROMs which can also be widely used.