To report our initial experience with lens-sparing vitrectomy for stage 4 retinopathy of prematurity using the 27-gauge (G) system.

At one-year follow-up, anatomical outcome was favourable in all nine (100%) eyes. High-speed cutting and smaller sclerotomies were helpful in reducing the intra and post-operative complications.

Core tip: This is a retrospective study of nine eyes of five children with active stage 4 retinopathy of prematurity, who underwent 27-gauge microincision vitrectomy surgeries with excellent outcomes.

Pars plana vitrectomy was first described by Machemer et al[1] in 1971 when he used the 17-gauge (G) system, where the incisions were > 1 mm in size. Later, O’Malley and Heintz[2] introduced the 20-G system where the incisions became 0.9 mm in size. Although this remained the standard of care for almost three decades, the disadvantage was that apart from relatively bulky instruments, it needed conjunctival dissection followed by applications of sutures. A big change was seen when small-gauge (23 and 25 G) instrumentation was introduced[3,4]. With thinner instrumentation, the incision became smaller to 0.5 mm and transconjunctival entry with sutureless closure became a possibility. This is extremely beneficial in the small eyes of premature neonates[5]. The advent of 27-G vitrectomy with only 0.4 mm incisions has led to a new beginning of transconjuctival microincision vitrectomy surgery (MIVS) in retinopathy of prematurity (ROP). Oshima et al[6] in 2010 were the first to describe the safety and feasibility of the 27-gauge MIVS system with excellent visual and anatomical outcomes in adults. However, its use in ROP is still not established, although Yonekawa et al[7] have reported 25 and 27-G hybrid vitrectomy in complex surgeries including ROP.

The purpose of this study was to describe our initial experience in using the 27-G trocar and cannula system in pediatric eyes with stage 4 ROP.

This is a retrospective non-comparative case series of nine eyes of five babies. All eyes had stage 4 ROP. Four babies had bilateral disease and both eyes were operated sequentially under same general anesthesia[8]. Care was taken to rescrub and re-prepare the surgical field of the second eye as done for any new case. The entire team rescrubbed and a new set of surgical instruments were used for each eye. Written informed consent was obtained from their parents for the procedure. Ethics committee approval was obtained for this study. The study was conducted from January 2015 to December 2015. Patient records were reviewed and the data collected were date of birth, gestational age, birth weight, postconceptional age, postnatal age, and intra and post-operative status of each eye.

All surgeries were performed under general anesthesia by a single surgeon, using the Constellation Vision System with Vitrectomy 27-G Total Plus Vitrectomy Pak system (Alcon Laboratories, Texas, United States). Valved 27-G cannulas were used. The intraocular portions of the 27-G cannula, which are designed for adult eyes were shortened for these small pediatric eyes, similar to what has been described by Babu et al[9]. We took a 42 silicon band, which has a width of 4 mm and a thickness of 1.25 mm. The band was divided at 2 mm and again cut in the center to get two small pieces of 2 mm x 2 mm each. The trocar and cannula were passed through these pieces till the hub with the help of a toothed forceps. Cannulas were inserted at inferotemporal, superotemporal, and superonasal quadrants, 1.5 mm away from the limbus (Figure 1). The conjunctiva and Tenon’s capsule were displaced over the sclera to avoid communication between conjunctival and scleral entry sites. 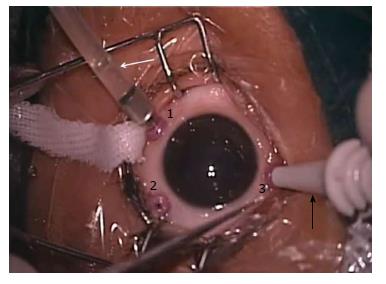 Figure 1 Intraoperative picture of a left eye. The three sclerotomies 1.5 mm from the limbus are labeled as 1 (inferotemporal port), 2 (superotemporal port) and 3 (superonasal port) of the 27-gauge vitrectomy system (silicon band pieces are not shown in this representative photograph). The white arrow shows the infusion tube through which balanced salt solution flows and maintains intraocular pressure. The black arrow shows the trocar handle inserting the last superonasal port.

Trocar cannulas were inserted via a “straight in” (perpendicular to the sclera) or angled (less than 90 degrees to the sclera) approach in a 1-step procedure. First, a core vitrectomy was performed using a cutting speed of 5000 cuts per minute and a suction of 150 mmHg in core mode. Peripheral vitrectomy was done using 7500 cuts per minute with the same suction in shave mode of the machine. After the vitrectomy, partial fluid air exchange was done, the cannulas were removed, and sclerotomies were left sutureless after thorough examination for any leakage. Babies were examined on postoperative days 1, 14, and after one month.

Nine eyes of five babies were operated during the study period. Mean gestational age of these babies was 29.2 wk (range, 28-31 wk). Mean birth weight was 1177 g (range, 950-1850 g). Mean postconceptional age at the time of surgery was 39 wk (range, 36-43 wk), and mean postnatal age was 9.6 wk (range, 6-12 wk). Out of nine eyes, seven had stage 4a and two had 4b disease. Two eyes of case 1 had ROP in zone 1, while the rest of the eyes had ROP in zone 2. Eight eyes of four cases had undergone laser therapy prior to vitrectomy (Table 1). Two eyes of case 1 underwent vitrectomy along with intravitreal injection of ranibizumab as this case had excessive vascularity. At 4-mo follow-up, anatomical success was seen in all ten (100%) eyes (Figure 2). We did not encounter any postoperative hypotony in any of our cases. No other complications were noted in the follow-up period. At an average follow-up of 12 mo, all eyes showed stable regressed ROP.

Figure 2 Anatomical success was achieved in all ten eyes at 4-mo follow-up. A: Preoperative picture of left eyes showing stage 4A ROP with partial retinal detachment (black arrows), and the optic disc is shown by the thin white arrow; B: Postoperative picture of the same eye showing settled retinal detachment with residual fibrous tissue (black arrows). The optic disc and fovea are shown by the white arrows, respectively.
DISCUSSION

The introduction of 27-G vitrectomy had major concerns like reduced endoillumination, instrument fragility, and reduced flow rate during surgery[10]. Oshima et al[6] in their study describe the various steps taken to improve the MIVS. This study done in 2010 with 31 adult eyes undergoing vitreoretinal surgeries for epiretinal membrane, macular hole, vitreous hemorrhage, focal tractional retinal detachment, and vitreomacular traction also analyzed the duty cycles of cutter, infusion and aspiration rates, and clinical outcome of 27-G MIVS. Brighter light sources such as xenon and mercury vapour bulb were used to increase the endoillumination. The smaller gauge did increase the fragility of the cutter during vitrectomy and to avoid this, the shaft of the cutter was reduced from 32 mm to 25 mm, which gives a good rigidity similar to that of a conventional 25-G vitrectomy.

High cutting rates of 27-G vitrectomy was proved to be a major advantage as it reduced the risk of iatrogenic damage to the retinal surface and intraoperative retinal tears by preventing uncut vitreous fibers entering the cutter port. Clinically and experimentally it has been proved that high cutting rates reduce retinal traction and thereby retinal breaks[11,12].

Postoperative complications seen with 23 and 25-gauge surgery like poor wound sealing causing leakage, hypotony, and endophthalmitis[13-15] were serious concerns, but one-step insertion technique in 27-G vitrectomy surgeries avoided these problems. Opening and closing procedures are simplified with the one-step insertion technique, consequently shortening the total operative time. Similarly, Rizzo and colleagues[16] in 2012 described 27-G vitrectomy in 16 patients and achieved a good clinical outcome. Additional surgical indications included were rhegmatogenous retinal detachment and tractional retinal detachment. No intraoperative and postoperative complications were encountered and no cases were converted to the 23 or 25-G system.

A retrospective case series of 95 adult eyes by Khan et al[17] has been extremely valuable as it includes a large sample size of 27-G MIVS operated till date. This study evaluated the change in visual acuity, postoperative intraocular pressure (IOP), and the mean operative time by diagnosis. They reported an initial fall in IOP over the first week, which started to increase after day 30. A recently published study of cases with 20, 23, and 25-G surgeries showed a decrease in baseline IOP over a period of 3 mo and then gradual regain[18]. Thus, they concluded that IOP regains faster to the baseline value in MIVS.

In our study, 27-G MIVS performed in pediatric eyes is the first of its kind and has not been reported till date. The problem of bending of the shaft is minimal as the plus system has a small cuff of metal supporting the base and ROP vitrectomy just needs a good core vitrectomy with keeping the instruments more perpendicular compared to adults in whom base shaving may be required. None of our case had hypotony in the postoperative period as compared to 5% in a study by Khan et al[17]. However, our sample size is much smaller compared to their study. Singh et al[19] showed that the different gauge vitrectomy systems are equally effective and safe. All of our cases were sutureless and at the end of the surgery none developed any wound leak, which was seen in about 0%-7.1% of cases of 23 and 25-G vitrectomy[20-22]. No sclerotomy-related retinal tears were noted while with 23 and 25-gauge vitrectomy 0%-3.1% have been reported[22-25].

In one case during vitrectomy, the cannula came out along with the vitrectomy cutter, and this could have been avoided by carefully removing the cutter. This could be more common in the 27-G system compared to the 25-G system, as Alcon 27-G cannulas are valved and hence get snuggly attached to the instruments. In four babies, bilateral simultaneous vitrectomy was performed as all these babies had bilateral acute disease. The anatomical outcome was 100% in our study, which is better than previously reported ROP vitrectomies with larger gauges[8,26-28].

Limitation of our study is small sample size. Thus to summarize, the 27-G system could be favourable for pediatric cases, since this technique has a favorable wound sealing structure with fewer postoperative complications and better surgical outcomes. However, studies with a larger sample size are needed to substantiate this.

Retinopathy of prematurity (ROP) vitrectomy is challenging due to the altered and more compact structures in a pediatric eye. Hence, there is a need to invent smaller vitrectomy instruments to make the outcome of this surgery better. 27-gauge vitrectomy being the smallest gauge available commercially could have the most benefit in the pediatric age group.

27-gauge instruments are smaller in size and have capability of high speed cutting, which is ideal for pediatric eyes. Hence, this study was conducted to examine the feasibility of this instrument in ROP surgery.

The main research objective was to assess the feasibility of 27-gauge vitrectomy for ROP and to examine if the ease of surgery and surgical outcomes could be bettered.

The results of this study show that sutureless transconjuctival 27-gauge vitrectomy has good anatomical outcome in stage 4 ROP.

27-gauge vitrectomy is beneficial for pediatric eyes. It is safe and effective. This study shows that smaller gauge instruments are most suitable for lens-sparing vitrectomy in ROP where the surgical space is very limited with the ever looming danger of damaging the lens anteriorly and the retinal posteriorly. Even with the limited surgical space, it become easier to maneuver with 27-gauge instruments without damaging the critical structures.

In the future, 27-gauge vitrectomy has the potential to become the standard of care for all ROP-related lens-sparing vitrectomies.