Lysinuric protein intolerance (LPI) is an inborn error of metabolism consequential to recessive mutations in the SLC7A7 gene. The metabolic imbalance in absorption and excretion of dibasic amino acids is considered the basis of LPI. The disease results from protein intolerance with signs and symptoms oscillating from cerebral impairment, respiratory involvement, renal failure and autoimmune complications.

To determine biochemical and clinical presentation of cases with biochemical picture suggestive of LPI in Pakistani children.

The study was conducted at the Biochemical Genetic Lab, Department of Pathology and Laboratory Medicine, AKU Plasma, and urine amino acid quantification data from January 2013 to October 2018 was included in this study. The amino acids were analyzed by high performance liquid chromatography. Prestructured requisition forms were used to obtain the clinicopathological data. Statistical analysis was done by Microsoft Excel 2017.

A total of 6 patients were recognized. All the patients were male (100%). The mean age was 24 mo ± 10 d. All the patients had low plasma concentration of lysine, ornithine and arginine, whereas increased levels of lysine, ornithine and arginine in urine were observed in 2 patients. History of consanguineous marriage was present in all patients (100%). The most observed clinical symptom was feeding difficulty followed by failure to thrive (83.3%) and developmental delay (66.6%). Hepatomegaly was present in all patients (100%). No mutation analysis was done.

This study portrays the biochemical and clinical spectrum of LPI in Pakistan. Although clinical manifestations appeared in the first 2 years of life, most of them suffered a delay in undergoing diagnostic workup.

Core Tip: Lysinuric protein intolerance is an inherited biochemical disorder with just over 140 individuals worldwide. In this disorder, there is defective absorption and excretion of dibasic amino acids, such as lysine, arginine and ornithine. This is the first study from Pakistan, which has a high prevalence of inherited metabolic disorders. Only 4 previously reported cases were identified from South Asia. This study shows the biochemical pattern and clinical characteristics in patients with a suggestive diagnosis of lysinuric protein intolerance on biochemical workup.

Lysinuric protein intolerance (LPI) is a multi-organ congenital metabolic disorder. The recessive mutations of the SLC7A7 gene located at chromosome 14q11.2 causes faulty transport of cationic amino acids of the epithelial cells, mainly at the basolateral membrane of the kidney and intestine[1]. This leads to an imbalance in absorption and excretion of cationic amino acids like lysine, ornithine and arginine. Hence their plasma levels are decreased, but urine levels are raised. The presence of the transport defect in the hepatocytes distinguishes LPI from other hyper-dibasic aminoacidurias[2]. There is co-occurrence of increased neutral amino acids (alanine, citrulline, glycine, proline and glutamine) on plasma amino acid testing[3,4].

The conventional presentation of LPI is after weaning from breast milk. It can present with upper and lower gastrointestinal symptoms, such as nausea, vomiting and diarrhea. Due to protein intolerance, most patients ultimately develop micronutrient and macronutrient deficiencies. Neurological manifestations such as hypotonia, lethargy, abnormal behavior, seizures and coma can result from episodic postprandial hyperammonemia[5,6]. This hyperammonemia is due to decreased levels of arginine and ornithine. The epitome of most of the symptoms is a secondary urea cycle defect. This combination of vague symptoms often causes a diagnostic delay[7], progressive disease and apprehension among caregivers. Clinical history and quantitative measurement of plasma and urine amino acids is required to reach the diagnosis. However, if a patient is on total parenteral nutrition, plasma amino acid profile may be falsely normal. The actual incidence of LPI in Pakistani population is unidentified. Therefore, this study was initiated to determine the clinicopathological spectrum of patients with a biochemical picture suggestive of LPI.

The study was conducted at the Biochemical Genetic Lab, Department of Pathology and Laboratory Medicine, Aga Khan University Hospital, Karachi. Plasma amino acid (PAA) and urine amino acid (UAA) quantification data from January 2013 to October 2018 was included in the study.

The study was conducted in two phases. In the initial phase, a chemical pathologist reviewed PAA and UAA reports, and reports suggestive of LPI were outlined. In the subsequent phase, clinical details were retrieved from the history forms received with test requisition.

First, 3-4 mL blood was taken in a lithium heparin tube for PAA quantification. Samples were centrifuged then delivered in dry ice to the Biochemical Genetic Lab. The samples were kept at -20 °C until analysis.

The amino acid level was measured by cation-exchange high performance liquid chromatography. To deproteinize the standard, the control and the samples, 10% sulfosalicylic acid was used. Norleucine was used as an internal standard. EZ chrome 3.31 was used to determine the results. Quality control and proficiency testing validation for amino acids were completed per the Clinical and Laboratory Standards Institution guidelines[8]. High and low levels of quality control samples were analyzed with each batch of 10 samples. The study commenced after receiving approval from the ethical review committee.

Statistical analysis was performed by Microsoft Excel 2017. Frequencies and percentages were generated for gender, consanguinity, clinical presentations and biochemical features of LPI.

Over a span of 6 years, PAA estimation of 3057 patients was performed. Six patients were recruited in the study having PAA concentrations suggestive of LPI. All of them were males (100%). The mean age was 24 mo ± 10 d. Parental consanguinity was observed in all 6 (100%) patients (Figure 1). 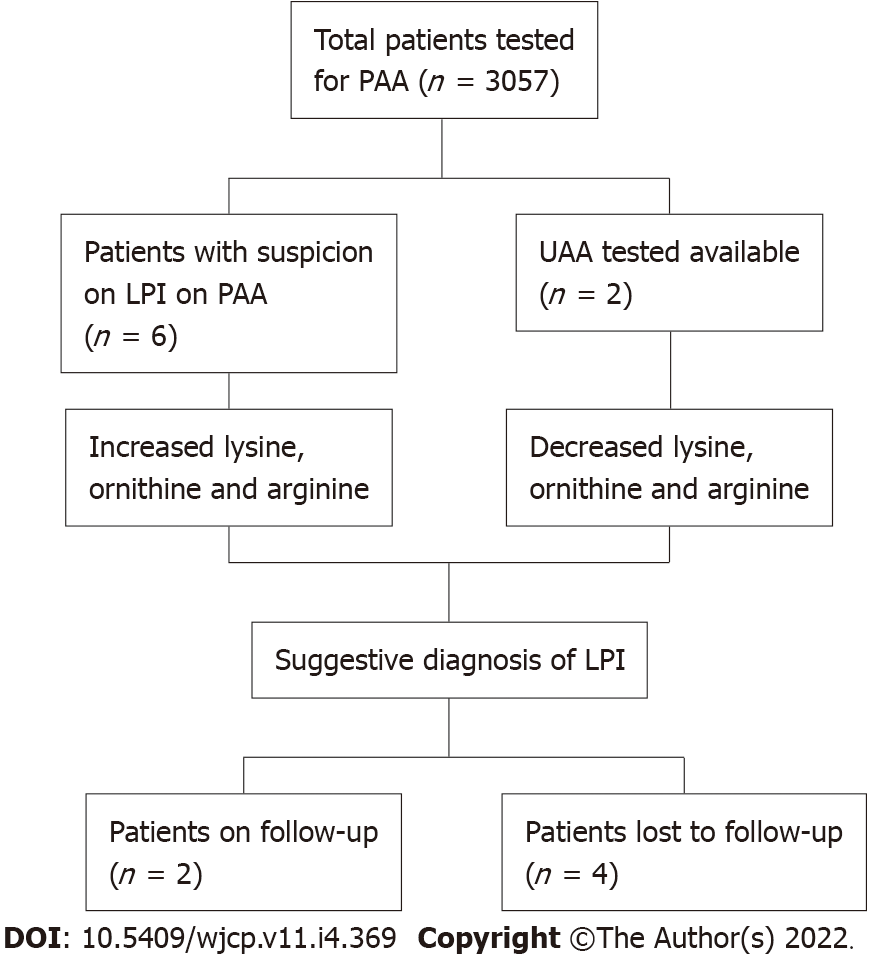 The most common clinical features recorded were feeding difficulty (6; 100%), failure to thrive (5; 83.3%) and developmental delay (4; 66.6%) as shown in Figure 2. Also, hepatosplenomegaly was observed in all patients (100%) and respiratory distress in 2 patients (33.3%). All the patients had decreased blood concentrations of lysine, ornithine and arginine (100%). The urinary concentrations of lysine, ornithine and arginine were increased in 2 patients (33.3%), while UAA was not undertaken for the remaining cases. 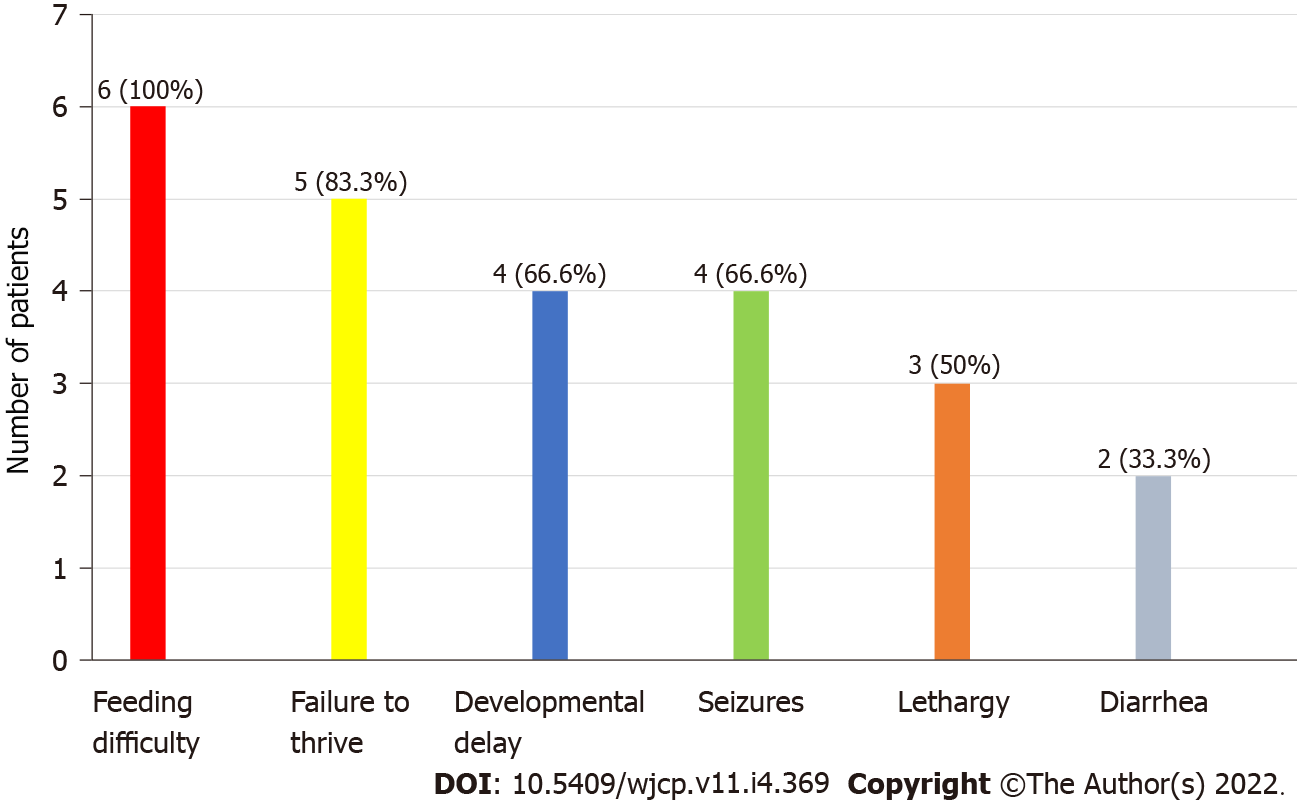 Out of 6 patients, only 2 patients were followed up. They were put on a protein restricted natural diet along with L-citrulline and L-carnitine supplementation. The remaining patients refused any further diagnostic testing and treatment due to economic reasons.

LPI is a rare disorder, and just over 140 individuals with LPI have been reported in the world, of which one-third are of Finnish origin[9]. There are no reported cases in Pakistan. An LPI patient usually presents with hepatosplenomegaly, impaired growth, protein intolerance and poor feeding. Long-term protein restriction and citrulline and nitrogen scavenging drugs are the drugs of choice. The prevention and treatment of the complications such as lung, renal and musculoskeletal system are also an important part of managing LPI. Being an autosomal recessive disorder, genetic counseling can form an important part of the management.

The cases reported in the current study presented after weaning with gastrointestinal disturbance, poor feeding, growth retardation and enlargement of the liver and spleen. Increased levels of lysine and arginine in the urine are diagnostic of LPI as was seen in our patients. Another method of making a definitive diagnosis of LPI is confirming the presence of the mutated SLC7A7 gene by methods such as targeted mutation analysis and sequence analysis[1], which could not be done in this study.

A suspicion of LPI is aroused when a child shows an inability to digest proteins, whereas clinical findings include growth retardation, developmental delay and pulmonary and cerebral impairment. However, LPI may often be confused with other disorders such as hyperammonemia, lysosomal storage diseases, malabsorptive diseases and autoimmune disorders, such as systemic lupus erythematosus[10], which show similar clinical findings. Therefore, a confirmed diagnosis of LPI requires the combination of the above-mentioned signs along with positive laboratory findings.

In addition to the small sample size from a single center, there are a few notable limitations of this study including the lack of gene sequencing for the confirmation of diagnosis and study population based on symptomatic cases following a high-risk screening. Gene sequencing for the disorder is not available in Pakistan, and additional cost of outsourcing the samples to laboratories abroad further leads to constraints for the confirmatory diagnosis.

Treatment of LPI includes protein restriction; compensation for the loss of lysine and arginine involves carnitine supplementation, as it has been found to be effective by having a lysine-sparing effect. Citrulline has also been found effective as a treatment option in LPI as it is converted to arginine in the body. In cases of an acute hyperammonemic crisis, pharmacologic treatment with arginine chloride, which blocks the production of ammonia, and a blend of medicines like sodium benzoate and sodium phenylacetate has been suggested[10]. LPI is often associated with pulmonary and renal complications, and treatment of such complications with corticosteroids is found to be effective in some patients[1]. Therapy with bisphosphonates is currently under investigation as osteopenia leading to osteoporosis is a major feature[11].

Short stature, growth retardation and failure to thrive is usually observed in LPI patients due to protein malnutrition. Many studies have concluded that various amino acids and hormones influence the growth of these children. Awrich et al[12] reported that amino acids in combination such as citrulline with lysine and arginine with lysine had potent effects on growth and development of these children. A study also showed that an ample supply of arginine also helped in improving growth retardation in LPI[13]. The quality of life of these patients is dependent on lifelong monitoring and management of complications. The prognosis of a child with LPI varies on the involvement of lung and the successful resolution of its complications, with pulmonary involvement representing an increased fatal outcome[11]. Being an autosomal recessive disorder, an antenatal diagnosis of LPI can be made by the DNA analysis of fetal cells extracted by amniocentesis usually performed at 15-18 wk of gestation[10]. Table 1 shows the summary of studies from South Asia.

This study portrays the biochemical and clinical spectrum of LPI in Pakistani children. LPI is an inherited metabolic disorder. The treatment of which involves a protein-restricted diet and supplement of lysine, ornithine and citrulline. The clinical diagnosis of LPI can be delayed due to a combination of non-specific symptoms. In patients with hyperammonemia, LPI should be kept for differential diagnosis. There is need for wide spread local availability of PAA and UAA measurement to aid clinicians.

Lysinuric protein intolerance (LPI) is an inherited metabolic disorder caused by alterations in the SLC7A7 gene.

To create awareness among the clinical community and describe the spectrum of this rare disorder in Pakistan.

To present the biochemical and clinical presentation of cases with suggestive LPI in Pakistan.

Six cases with a suggestive diagnosis of LPI based on amino acid profiling were reported.

Although clinical manifestations appeared in the first 2 years of life, a delay in diagnosis was evident.

A high rate of inherited metabolic disorders in Pakistan is known.