Just like children are not small adults, pediatric studies are not just subgroup-adult studies. Clinical pharmacology aims to predict these effects based on drug, population and/or patient-specific pharmacokinetics (concentration-time profiles) and -dynamics (concentration-effect profile). The most essential characteristics of childhood are growth and maturation. Both phenomena are most prominent during infancy making the claim that “an infant is not just a small child” as relevant compared to the paradigm that “a child is not just a small adult”. From a clinical pharmacology perspective, the consequence of such a dynamic setting is extensive variability throughout childhood in both the pharmacokinetics and pharmacodynamics. Trial design probably has impact on recruitment to an even greater extent compared to adult studies. In general, if a study is designed well, with a clear clinical question with which parents and children can identify, they are likely to consider participation. Open communication with all stakeholders involved will most likely result in ethically correct, practically feasible, scientifically sound, and economical reasonable studies to provide children with the appropriate treatment. From an academic perspective, feasibility, relevance, applicability and costs of clinical pharmacological studies in children can be significantly improved by new sampling concepts (e.g., saliva, urine, dried spot blood) and the systematic introduction of already known information into the trial design through model based pediatric drug development, that mainly affect feasibility of pharmacokinetic studies. In contrast, for the pharmacodynamic part of pediatric studies, development and validation of population specific biomarkers or robust outcome variables is urgently needed.

WHY PEDIATRIC STUDIES ARE NEEDED

By virtue of their developmental and cognitive abilities, children are a vulnerable population, depending on adults for protection. This is also true when participation in a clinical trial is considered. In addition to adaptations of the clinical protocol design (e.g., drug formulation, dosing, sampling strategy, and clinical indication), recruitment and retention strategies, incentives and the process to obtain informed consent must be modified. The current limited experience with pediatric recruitment is the result of a historical swing. In the 18th and 19th century, children were often viewed as “property” of their parents or legal representatives, and frequently recruited for research, with subsequent protection since the mid 20th century, formalized in e.g., the Helsinki declaration. Unfortunately, protecting children, got translated to excluding these populations from clinical trials, resulting in “therapeutic orphans”[1,2]. The danger of extrapolation of findings collected in adults to children has been recognized and some of the anecdotal errors (chloramphenicol in neonates, formulation errors, human immune deficiency virus related drugs in children, inappropriate questionnaires) are well known to the pediatric community. Differences in physiological responses to disease, in disease characteristics, in treatment modalities and in drug disposition necessitate collection of age-specific observations at various stages of pediatric maturation[1-3]. At present, unlicensed or off-label administration of drugs is frequent and in part depends on disease severity. Ironically, unlicensed or off-label administration is most frequent (60%-80%) the most critically ill patients (neonatal and pediatric intensive care), still 40%-60% in a pediatric hospital setting and 20%-40% in ambulatory care[1,2]. This is not without risk: unknown adverse events, poorly established efficacy, hazardous dose calculation and inappropriate formulation.

Since the late 90ies in the United States (Food and Drug Administration) and more recently (2006) in Europe (European Pediatric Regulation, 1901/2006) and in line with World Health Organization initiatives (Better medicines for children initiative/list of essential medicines), (legal) frameworks have been developed to re-launch clinical research on drugs in children. In the European Union (EU), this pediatric regulation governing the development and authorization of medicines of pediatric use (children and adolescents aged 0 to 17 years) has been introduced in December 2006 and entered into force in 2007. This regulation makes pediatric development an obligation in the EU for all new medicinal products unless a waiver has been granted. By making pediatric development mandatory, this regulation will lead to profound changes in pediatric (drug) development and will increase the number of studies performed in the pediatric population[3-5].

Effective implementation of such a launch necessitates collaboration of all stakeholders involved in search for a “good clinical practice” approach: i.e., ethically correct, practically feasible, scientifically sound, and economical reasonable. Open communication between the stakeholders (patients and their parents, academia, industry and government) will be crucial to achieve the common goal, i.e., to reduce off-label use of medicines in children so that their medical treatment is based on evidence and on understanding developmental physiology. From an industrial or clinical research organization point of view, this will necessitate networking and collaboration with health care professionals, initially and mainly trained for clinical care and parents/patients. For health care professionals, this necessitates readiness to develop clinical research networks and specific research skills in addition to the clinical care.

Besides regulatory requirements for receiving approval and final marketing authorization, the clinical trial design of pediatric studies probably effects recruitment to a greater extent than in adult studies (Figure 1). In general, the more complex and the more invasive, the harder to recruit. To enhance recruitment, the study should aim to use patients as close to the clinical situation as possible. Potential risks and inconveniences perceived to be of relevance in children include discomfort, inconvenience, pain, fear, separation from parents and family, effects on growing and developing organs, and size or volume of biological samples[1-3]. A feasible trial design, which do not impose a burden markedly beyond routine clinical care should be aimed for. Use of placebo in children is more restricted, because children cannot consent. Placebo should not be used when it means withholding effective treatment[2,5]. As the level of evidence in favour of an effective treatment increases, the ethical justification for placebo decreased. Placebo use in not equivalent to absence of treatment, but could be used on top of standard care. As many medicines used in children have not been fully assessed and authorized, medicinal products without marketing authorisation may be considered suitable as controls if they represent standard of care. The inclusion of an active control product not authorised in a clinical trial to be entered in a marketing authorisation file, should always be discussed with a scientific body of a (national) competent authority. In this editorial, we would like to focus on the contributions that can be made by academic research centers to further improve the study design, both for aspects of pharmacokinetics as well as -dynamics[6-13]. 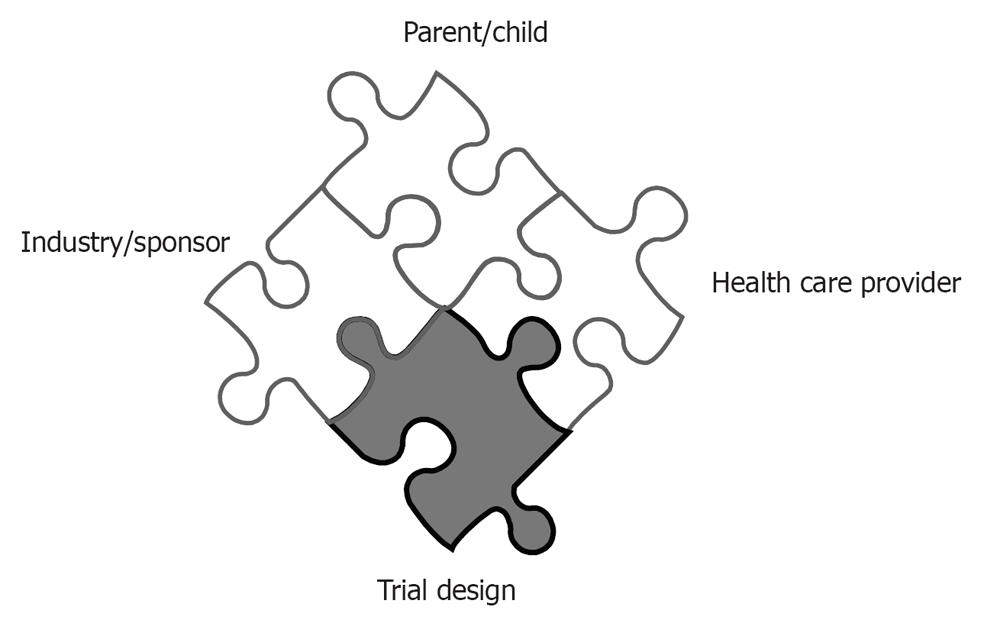 When a drug is prescribed, it is with the intention to attain a proportional therapeutic effect, preferably without side-effects. Clinical pharmacology aims to predict these effects based on drug, population and/or patient-specific pharmacokinetics (concentration-time profiles) and -dynamics (concentration-effect profile) (Figure 2). The most essential characteristics of childhood are growth and maturation. Both phenomena are most prominent during infancy making the claim that “an infant is not just a small child” as relevant compared to the more commonly used paradigm that “a child is not just a small adult”. From a clinical pharmacology perspective, the consequence of such a dynamic setting is extensive variability throughout childhood in both the pharmacokinetics and pharmacodynamics[1]. 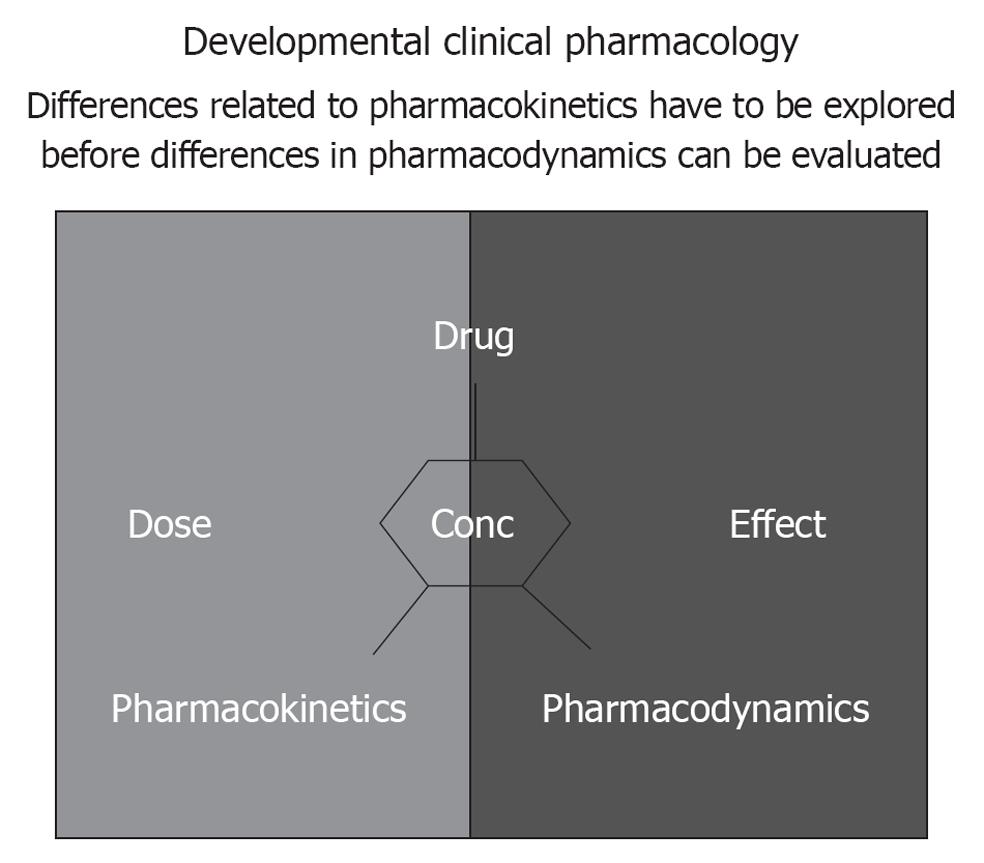 Differences related to pharmacokinetics have to be explored before differences in pharmacodynamics can be evaluated (Figure 2). The feasibility to perform studies in children relates in part to the introduction of adapted sampling techniques (e.g., saliva samples, dried spots blood) and more accurate quantification of metabolites in low volume samples. In addition, the burden for each individual infant can be further minimized by modeling and simulation approaches using non-linear mixed effect modeling to develop effective and safe dosing regimens since these population pharmacokinetic approaches result in the capability to analyze sparse, unbalanced datasets[7-11]. The variability can - to a certain extent - be anticipated. We would like to raise awareness in the pediatric clinical research community for the relevance of “rich data sets” that contain clinical characteristics and concentration-time (pharmacokinetics) or concentration-effect (pharmacodynamics) profiles: the description of a compound specific pattern is beyond compound specific relevance since it reflects maturational changes[7-11].

The maturational patterns described and the extent of the impact of covariates can be used to predict in vivo time-concentration profiles for compounds that undergo similar routes of elimination. However, following initial development, the clinical research community still fails to a certain extent to validate such models in the clinical setting. Besides internal and external validation, prospective clinical trials, which allow for the evaluation of the model-based dosing regimens are needed, not only to adjust the proposed dosing regimen, but also to convince pediatricians to use the information that has been generated using these modeling exercises [7-11]. This general concept has been illustrated in Figure 3. The development and validation of analytic methods adapted for pediatric applications and the modeling and simulation concept should be further developed within the academic research groups active in the field of pediatrics. 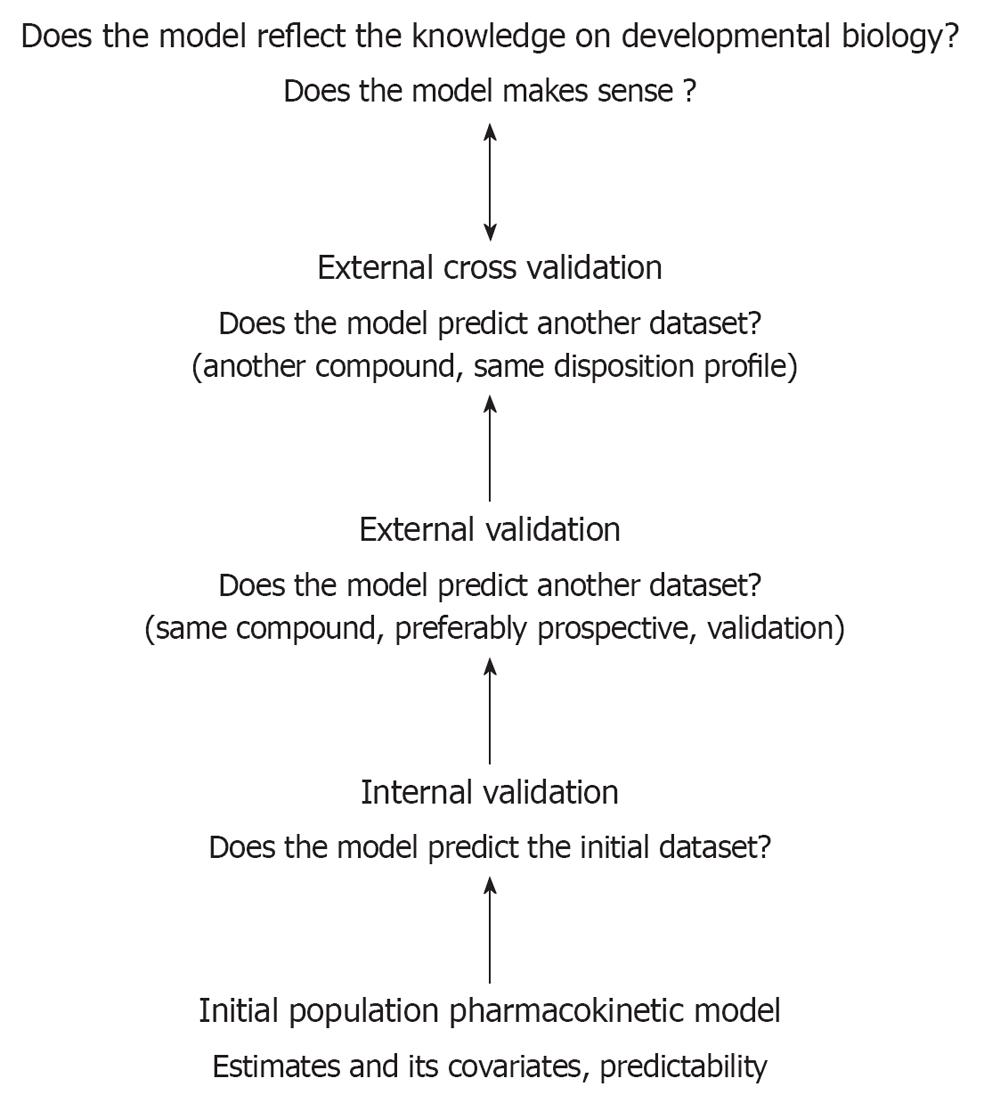 Improved knowledge on developmental pharmacokinetics is in the majority of drugs only a first, but essential step to describe the impact of maturation on the concentration/effect relation (Figure 2). Similar to the expansion of biomarker research in adult medicine, there is an active search for valid biomarkers to evaluate effects and side effects of interventions in children[12,13]. In essence, a biomarker is a characteristic or quantitative indicator that reflects either normal biologic processes, or pathological processes or pharmacological responses[13-16].

Since the research field of clinical pediatrics is broad, we would like to use an illustrative, anecdotal approach to make this point obvious for the readers.

Pulmonary hypertension: How to adapt the 6 min walking test routinely used in adults to quantify the impact of therapeutic interventions (e.g., endarterectomy, pharmacological, physiotherapy) for children, infants or even neonates[17-19]

Depression in children: To quantify the severity of a depression, questionnaires are used. However, these questionnaires (e.g., sleeping disorders, vital signs, sexual dysfunction) need validation in adolescence or childhood[20-22].

Gastro-oesophageal reflux disease in infants: While outcome in adults is based on subjective comfort and on findings during gastroscopy, the symptoms (crying, apnoea, milk intake) are different in infants[23-25].

Renal failure: Creatinine reference values in neonates depend on birth weight, postnatal age but also on the measurement technique (either Jaffe or enzymatic quantification) applied[30-36].

Progressive neuromuscular diseases, type Duchenne: How to quantify the impact of a given intervention on muscular strength and to what extent is such a biomarker also of clinical relevance in children[37,38]

Biomarkers for patent ductus arteriosus: How sensitive and specific are clinical symptoms, specific flow measurements by echocardiography or should we consider the N-terminal pro-brain-type natriuretic peptide measurement[15,16,39]

Developmental pharmacology as a driver of clinical research in children

Since the implementation of the pediatric regulation in the United States and the subsequent initiatives throughout the world including Europe, there is an increase in ongoing research in the field of pediatric product development[40]. The results obtained during such a pediatric product development however are beyond the compound specific observations[40-45]. Research groups are made to collaborate and to agree on assessment tools, definitions and treatment strategies, and results obtained can be extrapolated to other compounds or other subpopulation within the pediatric age range[46-50]. The advantage of such an extrapolation is that the clinical research can shift from exploratory approach to confirmation, hypothesis-driven methods[7-13]. Collaborative efforts to improve research tools on pharmacokinetics (e.g., model-based pediatric medicinal development) and -dynamics (e.g., biomarkers) likely will result not only in improved pediatric drug therapy in near future, but are also a potent drivers to learn more of the intriguing world of developmental life[7-13].