The aim of this study is to report the diagnostic features, prevalence, mineral content, clinical significance and treatment options of molar incisor hypomineralization (MIH) and pre-eruptive intracoronal lesions (PEIR), in order to minimize miss-treatment of primary and permanent teeth in young children. MIH was defined as the occurrence of hypomineralization of one up to four permanent first molars from a systemic origin and frequently associated with affected incisors. PEIR are lesions that are located in the occlusal portion of the crown of unerupted permanent or primary teeth. The prevalence of MIH was reported between 2.5%-40% in the permanent first molars and 0%-21.8% in primary second molars. PEIR was observed in 2%-8% of children, mainly in mandibular second premolars and second and third permanent molars. A number of possible causes for MIH were mentioned, including environmental changes, diet and genetics in prenatal and postnatal periods, but all are questionable. In PEIR, the resorption of the intracoronal dentine begins only after crown development is complete and is caused by giant cells resembling osteoclast observed histologically on the dentine surface close to the pulp. The mineral content in MIH is reduced in comparison to normal enamel and dependent on the severity of the lesion. In PEIR the resorbed surface of enamel showed less mineral content. The hypomineralized enamel in MIH is not suitable for restorations with amalgam or composite materials, and the best material should be based on remineralization material like glass-ionomers. Similar, the resorbed dentin surface in PEIR should be covered by the biocompatible and re-mineralizing glass-ionomer cement.

Core tip: Molar incisor hypomineralization and pre-eruptive intracoronal lesions are an increasing concern in pediatric dentistry. Since both conditions are developmental and not caused by carious attack, correct diagnosis of the conditions is significant in order to successfully treat the teeth. Early diagnosis can improve the survival rate of these teeth, because breakdown of the enamel can occur in both lesions and subsequent carious attack may lead to pulpal involvement and extraction of teeth at a very young age. The optional restorative material should be based on the re-mineralizing properties of glass-ionomer cements.

The cause of MIH in permanent molars or primary molars (HSPM) is a disturbance during the initial calcification and/or maturation of enamel of the affected teeth[1,2]. The term hypomineralized second primary molars (HSPM)[3-6] is currently used to describe the condition previously known as deciduous molar hypomineralisation (DMH), although the condition can be observed also in primary first molars or canines. The characteristic features of hypomineralized permanent or primary molars are: (1) Opaque stains that vary between white, yellow and brown; (2) post-eruptive enamel breakdown, (3) atypical restorations and/or extensive caries with opacities at the margins; and (4) early extracted permanent molars. Variety can be noted not only in severity between patients but also varying degrees within the mouth of a single patient[6]. The affected permanent molars are very sensitive and difficult to treat due to some degree of inflammation in the pulp[2]. A wide variation in the reported global prevalence of MIH 2.9%-44% and HSPM 0-21.8% was published[7]. In a recent published study of 1001 Egyptian children aged 8-12 years old the prevalence of MIH was very low, 2.3%[8], and the most prevalent clinical defect was demarcated opacity. In a nearby country, Israel, the prevalence of MIH was 17.1% in the Jewish population and 17.95% in the Arab population (2671 Jewish children and 2844 Arab children were examined). The most important finding was that the percentage of MIH was higher in the younger age group (6-10 year) in comparison with the older age group (11-16 year)[9], implicating that more children with MIH will be treated by dentists in the future. A number of possible causes for MIH were mentioned, including environmental changes, diet and genetics in prenatal and postnatal periods[10-14]. The most significant etiological finding was that the ENAM rs3796704 marker may be associated with MIH[15]. Mineral density of MIH molars showed on average about 19% reduction compared to sound enamel, and mineral content was in average only 58% vol% mineral[16,17]. In contrast protein content was 15-21-folds higher in brown enamel and 8-folds in yellow and chalky enamel compared to normal enamel[18].

Pre-eruptive intracoronal lesions (PEIR) are lesions that are located in the occlusal portion of the crown of unerupted permanent or primary teeth[19-21]. The lesions may be detected incidentally on radiographs before their eruption into the oral cavity. PEIR manifest on roentgenographs as radiolucent lesions, which resemble caries. The lesions are located just beneath the dentine-enamel junction of unerupted teeth and may affect all the crown dentine[22]. It has been suggested that most of the cases previously defined as hidden or occult caries were in fact due to PEIR, but observed only after eruption of the involved tooth, and breakdown of the occlusal enamel[23]. The published prevalence of PEIR is 1.63%-8% by subject and 0.32%-2% by tooth[24-26], but two studies from Turkey reported a very high prevalence, 15.1% and 27.3%[27,28]. The highest prevalence was found in mandibular first premolars, followed by second or third molars, with no significant gender differences. The resorption of the intracoronal dentine begins only after crown development is complete[29] and results from resorption of dentin by osteoclast like giant cells observed histologically on the dentine on the pulpal surface[30] that may originate from undifferentiated cells of the developing dental follicle[31]. No systemic factors are currently known to predispose to PEIR, but in a recent publication it was correlated with delayed dental development of at least six months[32]. The aim of the study was to examine the mineral content of teeth affected by MIH and PEIR and to describe treatment options.

One normally exfoliated first primary molar affected by hypomineralization (FPMH) and one permanent molar extracted due to MH were analyzed (Figures 1 and 2).

Figure 2 Clinical image of the first permanent molar affected by MH and the SEM image of the analyzed enamel. A: Clinical picture. 1: Normal enamel; 2: Hypomineralized enamel border; B: SEM picture.

The primary molar showed two distinct areas of hypomineralization on the buccal surface: a yellow-brownish area (Figure 1, area 2) and an area with breakdown of enamel (Figure 1 area 3). The permanent molar showed breakdown of enamel on two-thirds of the crown height. The enamel close to the CEJ was the control area since MIH and HSPM affects only two-thirds of crown height. We used an energy-dispersive X-ray spectroscopy (EDAX EDS System) SEM (FEI Quanta 200 microscope operating at 25 keV) to compare the ion content of the surface enamel at the discolored area and the border of enamel breakdown lesion to normal enamel in the first primary molar and the border of the hypomineralized enamel breakdown in the first permanent molar to normal enamel at the cervical region. The results are summarized in Tables 1 and 2.

In the first primary molar the reduction of phosphate and calcium was related to the degree of hypomineralization- at the brown discolored area the calcium was reduced by almost 50% and at the border of breakdown enamel the reduction was by 70%. The phosphate was minimally reduced at the discolored area but significantly (by 65%) reduced at the border of breakdown of enamel. The carbon and oxygen content were increased. In the first permanent molar the reduction of calcium was by 35% and of phosphate by 60%. The oxygen and carbon content was increased by more than 300%. PEIR: The mineral content of an archeological specimen diagnosed with PEIR was analyzed[33]. The internal surface of the enamel of second permanent molar affected by PEIR was compared to intact enamel surface of first permanent molar. The calcium content was reduced by 10% but the phosphate was resorbed by 90%.

MIH is quite a new developmental entity that affects enamel formation in primary and permanent dentition. Its prevalence is low in the Africa countries and very high in the north European, Australia and South America countries. Recent publications tried to show that MIH can be found among past populations, as early as 12th century[34-37] . The main problem in the report is that the discoloration of the teeth attributed to hypomineralisation (Figures 1-3 in Garot et al[34] 2017, Figures 1 and 2 in Ogden et al[36] 2008, Figure 2B in Curzon et al[35] 2015) showed similar affected areas on both sides of the jaw and with similar hypoplastic areas. As Dr Manton, one of the authors of Garot et al[34] manuscript, described the clinical condition of MIH in a webinar, there is a great variability of severity of hypomineralisation in the same mouth between teeth developing during the same period. So, the similarity of discoloration and hypoplasia in teeth from the same jaw cannot be attributed to MIH. Pitted enamel (Figure 1 in Ogden et al[36] 2008, and in Kuhnisch et al[37] 2016) cannot be attributed to MIH, but to hypoplastic enamel. A well-known phenomenon is that taphonomic stains (Figure 1A and B in Kuhnisch et al[37] 2016, Figure 1B in Curzon et al[35] 2015) in archeological material may have a similar appearance to MIH as described by Garot et al[38]. The PEIR lesion can be easily diagnosed in archeological material in individuals with a caries free dentition and one tooth with an extensive resorption of the dentine with or without enamel breakdown[33]. 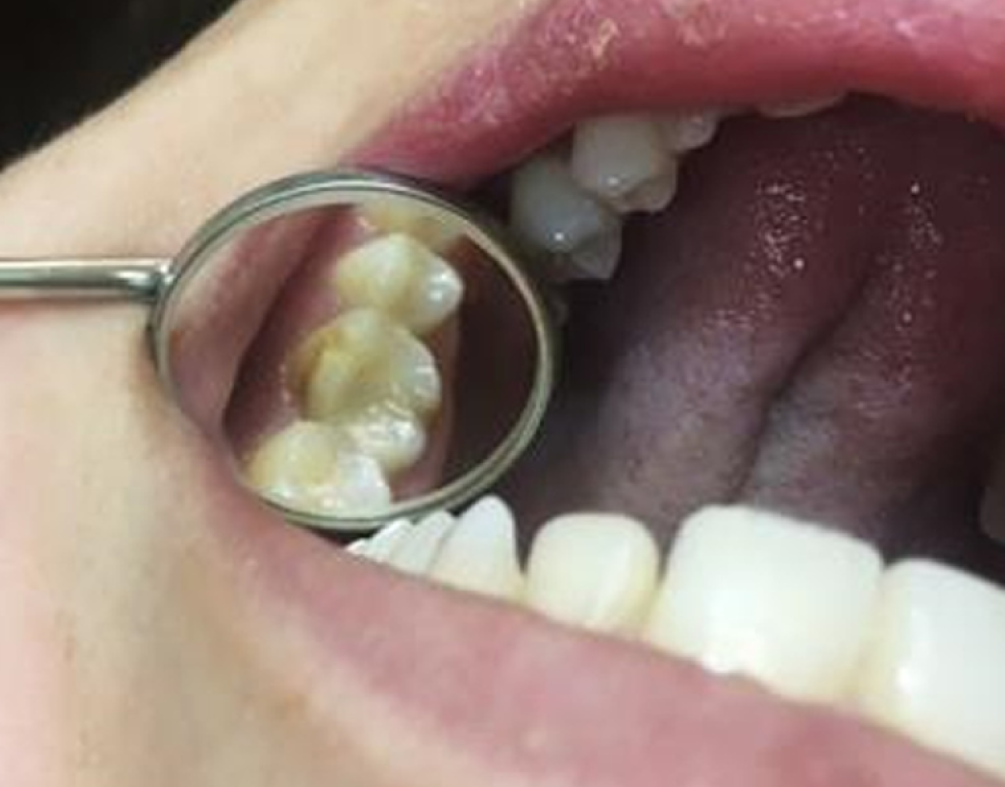 The clinical significance of MIH can be attributed to the high prevalence of the lesion in some Western countries and the early age of the patients. The permanent teeth affected by MIH are very sensitive and hard to anesthetize due to some degree of chronic pulpitis, since the dentinal tubuli are very wide and the inflammatory factors can reach the pulp very easy. The borders of MIH lesions, even if they appear clinically fully mineralized, showed some degree of hypomineralization[39]. Amalgam restorations require sound enamel on the borders in order to prevent ditching and discoloration[40]. Hypomineralized enamel is not suitable for composite restorations since the bonding strength is reduced[41,42]. In our clinic glass-ionomer restorative materials are used in cases of MIH, HSPM or HFPM with very high success rate (Figures 3-5). 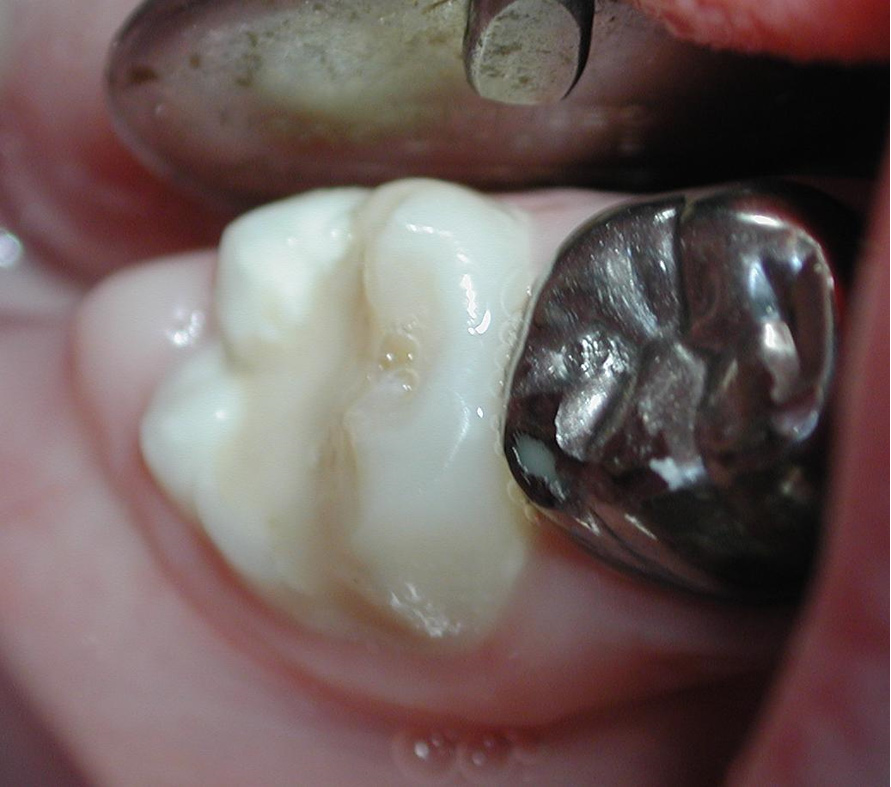 The PEIR lesions have to be treated early after eruption of the tooth or even before tooth eruption if the lesion is very large. Since the borders of the lesion are hypomineralized due to the resorption process Glass ionomer cements should be used for final restoration and remineralization of enamel and dentine[43](Figure 6).

Figure 6 Pre-eruptive intracoronal lesions of unerrupted second permanent molar (A) and restoration of the lesion with Glass-ionomer cement (EQUIA forte by GC Japan). A: SEM picture; B: Clinical picture.

Recent meta-analysis showed that ART single surface restorations using high-viscosity glass-ionomer cements like EQUIA Forte presented high survival percentages in both primary and permanent posterior teeth[44]. More efforts should be made in order to describe the clinical features of MIH and PEIR to GPs in order to minimize the atypical restorations with amalgam or composite and to minimize the need of extractions of permanent molars in young children.