We report the case of a 17-year-old boy with a soft tissue aneurysmal bone cyst (STABC) located in the posterior aspect of the right mandible. Conventional radiography revealed no positive findings. On the computed tomography scan, the lesion appeared to have a non-uniform intralesional density. Magnetic resonance imaging revealed an abnormal soft tissue masses with cystic component in the superficial part of right mandibular body and angle with intact cortex. Following histopathological examination, fibro-histiocytic proliferation, blood-filled spaces and multinucleated giant cells were seen and the lesion was diagnosed as a STABC. The mass together with underlying bone and periosteum on its periphery was surgically resected under general anesthesia. Thirty-six months after surgery the patient was assessed at outpatient clinic and found no sign of recurrence This may be only the first reported case of the mandible in the English literature of this extremely rare benign tumor occurring in soft tissue.

Core tip: A case of soft tissue aneurysmal bone cyst (STABC) of the mandible is presented in a male teenager. STABC is a rare entity with histological and radiological features that are identical to those of aneurysmal bone cyst, except for that STABC is of extra osseous location. The differential diagnosis of STABC in this location, includes giant cell tumor of soft tissue and extra skeletal osteosarcoma making it quite a challenge in the process of diagnosis.

Aneurysmal bone cyst (ABC) is a benign cystic lesion of bone, composed of blood filled spaces separated by connective tissue septa containing fibroblasts, osteoclast-type giant cells and reactive woven bone[1]. Previously, ABC was believed to occur exclusively in bone[1,2], but in recent years a few cases of soft tissue ABC (STABC) have been reported[3,4]. The first cases of soft tissue ABC were reported by Salm et al[5]. These cases were categorized as “vascular cystic tumors of soft tissues’’. Recent literature review of well-documented cases shows that STABC is a recognized lesion and extremely rare[6]. To the best of our knowledge the reported cases of STABC have been located in thigh, cervical spine, shoulder and upper extremities[7,8] and STABCs in the jaws have not been reported in the English language literature.

To increase our understanding of ABC arising in soft tissue, we report here a very rare case of soft tissue aneurysmal bone cyst of mandible. This case report was conducted in accordance with the principles of the Declaration of Helsinki.

In August 2009, a 17-year-old man was referred to a dentist complaining of a small swelling in his lower right angle of mandible beginning 4 mo ago. The patient was otherwise healthy, with no significant past medical history. He also did not have any previous history of trauma to head and neck region. The dentist suspected an inflammatory lesion and prescribed antibiotics. The patient continued the antibiotic use for one month but the size of the lesion did not change and began to increase. The patient was referred to Oral and Maxillofacial Surgery, Department of Buali Hospital in Tehran. On physical extra oral examination, facial asymmetry was apparent with, a firm, non fluctuant and non tender mass covered by normal skin on the right mandibular angle (Figure 1). On intra oral examination a firm swelling was found on the right mandibular angle without any fistula or suppuration. There were no positive findings in panoramic radiography. On magnetic resonance imaging (MRI), an abnormal soft tissue mass with cystic component in the superficial part of right mandibular body and angle with intact cortex (Figure 2A-C). In fine-needle aspiration, blood was detected and angiography was requested to rule out vascular lesions. The angiography report showed a lesion with only mild to moderate vascularity and ruled out arteriovenous malformation and hemangioma (Figure 2D). An incisional biopsy through an intraoral approach was performed under general anesthesia. The specimen consisted of 5 pieces of brownish-creamy fragmented tissues with rubbery consistency and solid on cut surface totally mesurring 3.0 cm × 2.0 cm × 0.4 cm, sent for histopathological examination. The microscopic evaluation showed spindle cell proliferation, many multi-nucleated giant cells, osteoid formation and pools of blood without any epithelium linings. Three weeks after the incisional biopsy, the patient was hospitalized and decortication of the lesion was surgically carried out under general anesthesia (Figure 3A and B). During the operation, frozen sections were requested and revealed no malignancy. Grossly, the mass was totally measured 6.5 cm × 4.2 cm × 1.2 cm and showed a soft tissue lesion with hemorrhagic cystic spaces (Figure 3C). 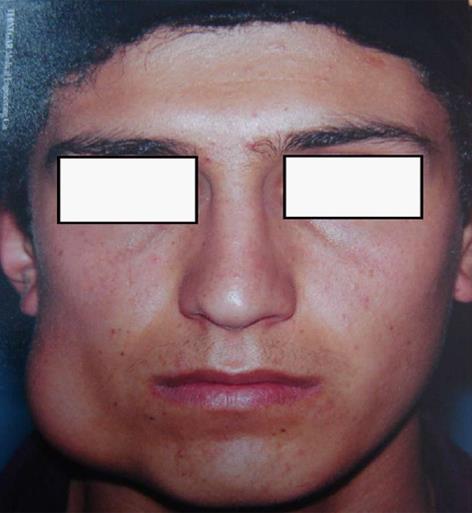 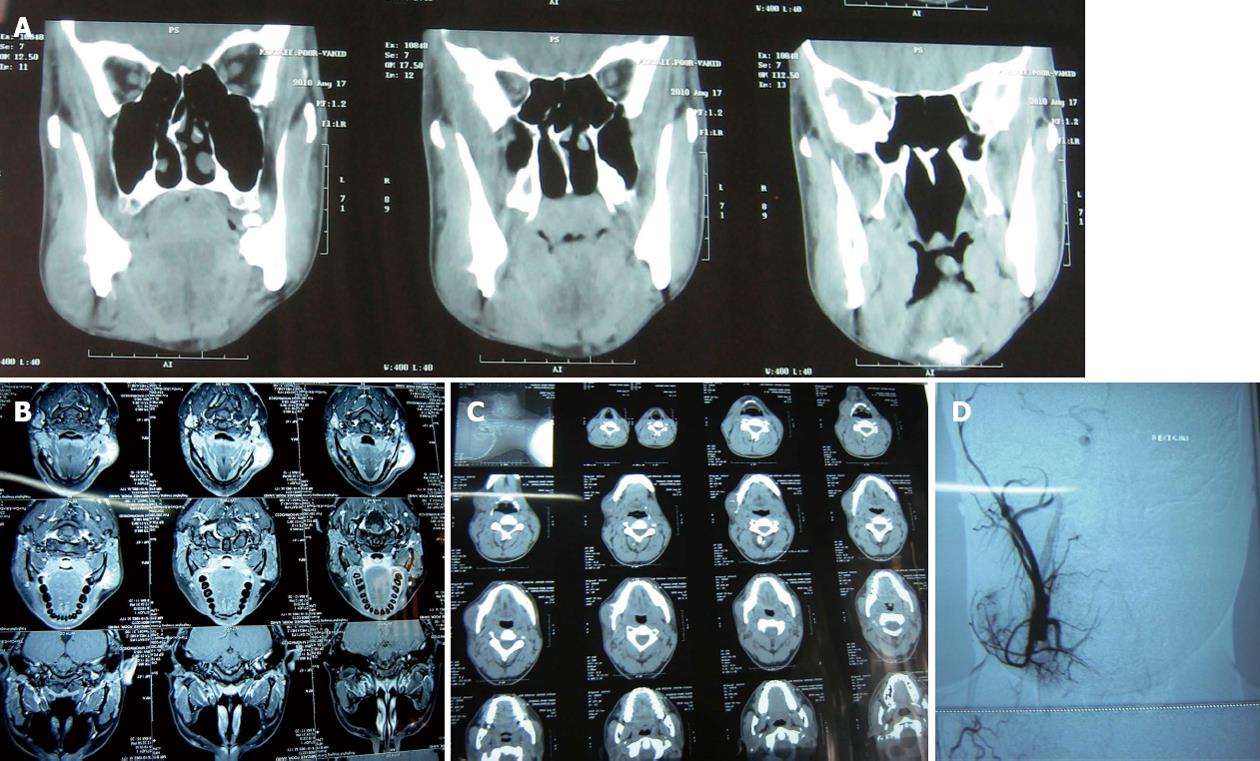 Figure 3 Clinical features at the surgery time. A: The mass was seen without involving adjacent bones; B: Periosteal reaction was seen in underlying bone; C: Gross view of excised lesion showed a solid lesion with eggshell-like rim of bone on its periphery and hemorrhagic cystic space.

Histopathological examination of the main lesion and the underlying bone and periosteum revealed fibro-histiocytic proliferation, blood-filled spaces and multinucleated giant cells (Figure 4). On reviewing all histopathological sections and paraclinical tests, the definitive diagnosis of STABC was confirmed. After 36 mo of follow up examination, the patient is well and free of any lesion (Figure 5). 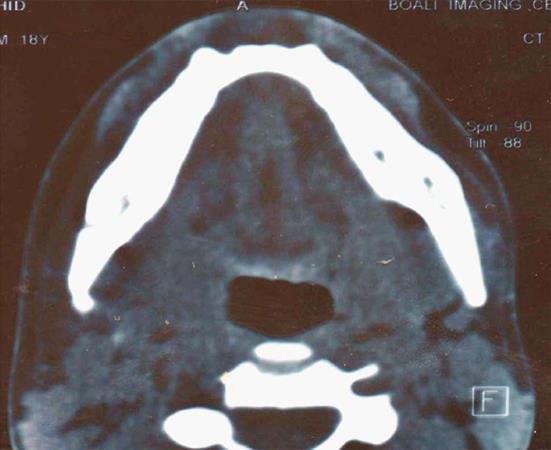 STABC is a rare entity with histological and radiological features that are identical to those of ABC, except for that STABC is of extra osseous location[4,5,7,8].

To the best of our knowledge the reported cases of STABC have been located in thigh, cervical spine, shoulder and upper extremities[3,8] and STABCs in the jaws have not been reported in the English language literature.

Our reported patient was male and a teenager, the age of the patient is in agreement with Nielsen et al[3] reporting five cases of soft tissue aneurysmal bone cyst in three females and two males who ranged from 8 to 37 years (median 28 years). Their reported cases arose in the soft tissues of upper extremities, tight and groin region as a rapidly growing mass. Clinical evaluation of our patient revealed rapidly growing non fluctuant and non tender mass on the right angle of mandible. Rapidly growing feature of ABC is a result of pathogenesis of this lesion and abnormal hemodynamics that leads to enlarging and hemorrhagic extravasation[3,6]. The maximal diameter of the lesion was 6 cm and macroscopically, the soft tissue mass was consisted of blood-filled cavities separated by septa of various thickness which is similar to the findings in other reported STABC[3,6,7].

Radiographically, the lesion had no positive findings in panoramic radiography. On the computed tomography scan, the lesion appeared to have a non-uniform intra lesional density.

MRI revealed an abnormal soft tissue mass with cystic component in the superficial part of right mandibular body and angle with intact cortex which is similar to the findings in other soft tissue ABC reports[7,8].

The changes seen in MRI appearance of aneurysmal cyst of soft tissue depends on its stage ranging from a primarily solid tumor to a predominantly multicystic lesion [9].

Histologically our reported case revealed fibro-histiocytic proliferation, blood-filled spaces and multinucleated giant cells, which is similar to other reports[3,4,6].

The differential diagnosis of STABC in this location, includes giant cell tumor of soft tissue and extra skeletal osteosarcoma[10].

Soft tissue giant cell tumor can be confused with STABC because of the presence of osteoclast- type giant cells in both lesions, but cystic change is the prominent view of STABC in histopathological evaluation[11,12].

The etiology of STABC is unclear. Several investigators have proposed trauma and vascular malformation as etiological factors[1,2]. However recent cytogenetic studies have provided evidence that STABC may be neoplastic in origin[13,14].

Follow-up showed that the patient has been free of any lesion 36 mo after the surgery, a good point to indicate that this lesion can be treated by simple excision and this treatment modality was in agreement with the report of Nielsen et al[3].

In conclusion, based on our experience STABC is an extremely rare type of benign soft tissue tumor especially in the head and neck area. Morphologically, it may be confused with a variety of soft tissue tumors. STABC infrequently recurs and complete excision is an appropriate treatment.

The authors wish to thank Dr. Seyed Mohammad Tavangar for his useful comments on histopathology evaluation of the case.