Multiple primary cancers are becoming an increasingly frequent situation and are often the source of many diagnostic and therapeutic difficulties. We report the case of two patients diagnosed with head and neck synchronous carcinomas. The first case is a 33-year-old man with a history of a keratinizing squamous cell carcinoma of the eye lid and who was operated 4 mo later from a mucoepidermoid carcinoma of the submandibular salivary gland. The second case is a 71-year-old woman who underwent a total parotidectomy for a mucoepidermoïd carcinoma of the left parotid gland and who consulted 2 mo later for epistaxis. The explorations concluded to a squamous cell carcinoma of the nasopharynx. The patient had a complementary radiotherapy. No local neither distant recurrence of the two tumors has been detected after a follow-up of 36 mo in the first case and 24 mo in the second one.

Core tip: Patients with head and neck cancer have a high risk of developing a simultaneous locoregional tumor. At the time of cancer diagnosis and during the follow-up, the clinician must search carefully for a second neoplasm which may reduce significantly the survival expectancy and have to be managed accurately. This paper describes and discusses, over two observations, the clinical and therapeutic features of these multiple primary cancers.

Nowadays multiple primary cancers (MPC) are becoming an increasingly frequent situation, especially with the increased recovery rate of the first cancer and with the progress in diagnosis and therapeutic techniques in oncology, but also given an aging population worldwide[1]. Billroth was the first to announce, in 1869, the upcoming of MPC. Then, it was Warren and Gates[2] in 1932, who established the criteria defining MPC. Thereby, the coexistence of multiple primary cancers in a single patient has been described in oncology literature with a frequency varying from 5.5% to 8.5% for all cancers combined[1]. We report in this article, the case of two patients diagnosed each with 2 different head and neck carcinomas.

A 33-year-old man was operated 4 mo ago for a keratinizing squamous cell carcinoma of the left lower eye lid T2aN0M0 (Figure 1). He presented to our ENT department with a one month history of a painless left submandibular swelling without salivary colic. Clinical examination found a 3 centimeter left submandibular firm mass, with no signs of inflammation and with no lymphadenopathy. Nasal endoscopy and the examination of the oral cavity didn’t revealed abnormalities. The magnetic resonance imaging (MRI) showed an oval mass of the left submandibular gland, well defined, presenting with a heterogeneous signal in T1, hyper signal in T2 with both solid and liquid components and a raising signal after injection (Figure 2). The patient underwent a left submandibulectomy and a triangular lymphadenectomy of the same side. Histopathology concluded to a mucoepidermoid carcinoma of the submandibular salivary gland. The lymph nodes were not invaded. The staging of the tumor was completed by a CT-scan of the cervicofacial and thoracoabdominal region. The classification of the tumor was T2N0M0. After a follow-up of 3 years, no recurrence of the two tumors has been noted. 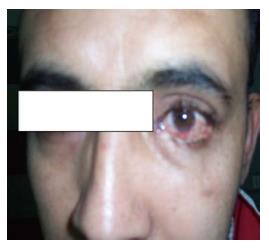 Figure 2 Magnetic resonance imaging showing a tumoral mass of the left submandibular gland with a heterogeneous signal in T1 and hyper signal in T2.
Observation 2

A 71-year-old woman, with a medical history of asthma and hypertension, underwent a total parotidectomy for a tumoral mass of the left parotid gland (Figure 3). The histopathological exam concluded to a mucoepidermoïd carcinoma (T2N0M0). She consulted 2 mo later for epistaxis, head ache and bilateral tinnitus. The endoscopic examination showed a burgeoning formation of the nasopharynx. The CT-scan showed a tumoral mass at the level of the right side of the posterior wall of the nasopharynx extending to the parapharyngeal fat (Figure 4). A biopsy of the mass was made under local anesthesia. The histological exam confirmed a moderately differentiated squamous cell carcinoma of the nasopharynx. The staging of the tumor was made after clinical examination: (cervical lymph node palpation, nasal endoscopy and examination of the oral cavity), CT-scan of the thoracoabdominal region and endoscopy of the upper digestive and respiratory tracts under general anesthesia. The tumor was classified as T2bN0M0. The patient was then treated by complementary radiotherapy (65 Gy). No local neither distant recurrence of the two tumors has been detected after a follow-up of 24 mo. 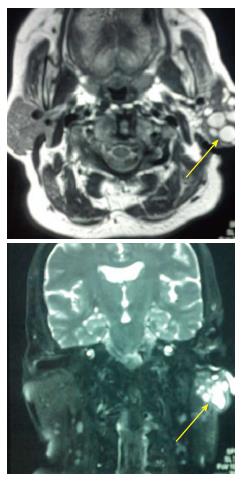 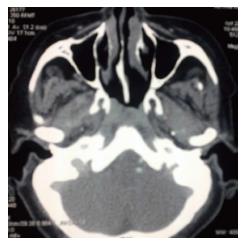 Figure 4 Computed tomography-scan in axial plane showing a tumoral mass of the right side of the posterior wall of the nasopharynx.
DISCUSSION

Multiple primary cancers (MPCs) represent 5.5% to 8.5% of all cancers described in english literature[3], whereas it only represents 7.5% of cancers in the head and neck[4]. According to the International Agency for Research on Cancer (IARC), MPCs are defined as two or more primitive cancers occurring within the same individual[2]. They can occur within the same organ or tissue, as they can affect different tissues or organs. They can correspond neither to an extension, nor to a relapse nor to a metastasis of the same primitive cancer[1].

In this light, it is important to establish a complete initial assessment of each apparently isolated cancer in order not to miss out on a second metachronous or synchronous cancer. It is also important to conserve certain therapeutic methods such as radiotherapy to second primitive cancers[6,7]. For our second patient, a complementary radiotherapy was administrated after the diagnosis of the nasopharyngeal carcinoma. This therapy couldn’t be used if the patient had been irradiated initially.

A meticulous clinical examination must be conducted to search for a second tumor near or far from the first tumor. In the case of head and neck cancers, cervical palpation, nasal endoscopy and accurate examination of the oral cavity must be undergone. Radiological exams and a biopsy must be done for each doubtful lesion[8].

A panendoscopy of oral cavity, pharynx, larynx, esophagus and bronchi must be performed to analyze and search for other lesions of the upper aerodigestive tract as well as to detect possible second malignancies[9].

Many cancers of the oral cavity, pharynx and larynx are related to tobacco intoxication. That’s another argument justifying the investigations looking for a second localization of each primary tumor diagnosed in these sites.

The continued use of tobacco and alcohol gives rise to the risk of metachronous MPC. It may be critical for patients to limit their alcohol and tobacco use after the first head and neck cancer treatment to expect better prognosis by preventing additional metachronous MPC[6]. Mucoepidermoïd carcinoma is by far the most common type of second salivary gland tumour. The vast majority occurred in the parotid gland; only exceptionally have such tumours been reported in the submandibular gland or minor salivary glands[5].

According to many studies, the prognosis of patients with MPC is significantly poorer than those without MPC. This may reflect that these patients with multiple malignant tumors had restricted therapeutic options and in some cases the second tumor is much more aggressive than the first one[1,4].

After a diagnosis of a primary carcinoma of the cervicofacial region, a careful long-term surveillance is mandatory to detect, not only the complications of therapy or a local recurrence of the primary cancer, but also the appearance of a synchronous or metachronous locoregional carcinoma[5,8].

Multiple primitive cancers are an increasingly frequent clinical situation, thanks to the rise of the recovery rate of the first cancer, to the progress in the fields of diagnostic and therapeutic medicine and to the reinforcement of the long term surveillance of cancer patients. The clinician should always keep in mind the possibility of being confronted to multiple primitive cancers. A rigorous assessment of the disease and a regular follow-up of the patient are mandatory in order to detect in time a second localization.

Case 1: He presented with a one month history of a painless left submandibular swelling without salivary colic. Case 2: She consulted for epistaxis, head ache and bilateral tinnitus.

Case 1: He has a 3 centimeter left submandibular firm mass, with no signs of inflammation and with no lymphadenopathy. Case 2: The endoscopic examination showed a burgeoning formation of the nasopharynx.

Case 1: The magnetic resonance imaging showed an oval mass of the left submandibular gland, with a heterogeneous signal in T1, hyper signal in T2 with both solid and liquid components and a raising signal after injection. Case 2: The CT-scan showed a tumoral mass at the level of the right side of the posterior wall of the nasopharynx extending to the parapharyngeal fat.

Case 1: The patient underwent a left submandibulectomy and a triangular lymphadenectomy of the same side. Case 2: The patient was treated by complementary radiotherapy.

A second simultaneous tumor may be associated to a primary cancer of head and neck and may be searched initially and during the follow-up.

Through this case report, we retain that in front of cervicofacial cancers, we must not be focused only on the primary tumor but we must do an accurate clinical examination to search for simultaneous lesions which may change the therapeutic protocol and the life expectancy of these patients.

This study is clearly presented.