METHODS: All the patients treated for a nasopharyngeal carcinoma between 2000 and 2013 in the Ear-Nose-Throat Department of the Military Hospital of Tunis, Tunisia were collected in this study. Eighty-three patients signed a written consent prior to study enrollment. The gender ratio (M/W) was 6.5 with a median age of 49 years (range 16-85). The median follow up time was 37 mo (18 to 108 mo). The evolution, during and after the end of therapy, was assessed on clinical biological and radiological exams. Different parameters were analyzed and compared to other series: complications of chemo and radiotherapy, recurrence of the disease, metastasis and overall survival rate.

RESULTS: Of the 83 patients of our study, 15% had T1 tumors, 20% had T2, 23% had T3 and 41% had T4 disease. At the time of diagnosis, 14% of the patients had a cranial nerve deficit. Only 12 patients had exclusive radiotherapy and the remaining of our patients had concomitant radio chemotherapy. Iatrogenic complications were diagnosed in 53% of the cases: radioepithelitis (28%), radiodermatitis (9%), xerostomia (17%), osteoradionecrosis (3%), cerebral radionecrosis (1%) and a pancytopenia (17%). The follow-up period varied from 18 to 108 mo (average: 37 mo). During the first six months after treatment, a persistence of the disease was found in 11% of patients, while a recurrence of the cancer was diagnosed in 6% and distant metastasis developed in 14% of the patients. Fifteen patients needed remedial chemotherapy for a relapse or metastasis and five had palliative chemotherapy for very advanced cases. We report 3 cases of death during the follow-up.

CONCLUSION: Despite its excellent radio-chemotherapy response, and general good prognosis, a careful follow-up of patients with NPC is necessary to detect and manage any iatrogenic complication, locoregional recurrence or metastasis of the disease.

Core tip: The carcinoma of the nasopharynx (NPC) is a particular form of cervico-facial cancers by its anatomic location, distinct pathologic features, ethnic pathogenesis and specific clinical outcome. This tumor is thought to have a good prognosis especially in undifferentiated and locally noninvasive forms. In this paper, we report our experience in the management of NPC and we report our results and complications during and after the end of therapy.

Nasopharyngeal carcinoma (NPC) has unique epidemiological, clinical and evolutive features that differentiate it from other cervico-facial cancers[1]. It’s known to be a multifactorial disease, most probably involving viral (EBV), genetic, dietary and environmental factors[1]. NPC can vary also histologically and the most frequent type remains the UCNT (undifferentiated carcinoma of the nasopharyngeal type). Every entity has similar endemic features with different incidences throughout the world[1]. Different studies found that this type of carcinoma is rare in Europe where the annual incidence doesn’t exceed 1/100000. North African countries (Tunisia, Algeria, Morocco) have a higher incidence than Northern Europe (8 to 12 per 100000). The highest incidence is noted in South East Asia and in China with an annual incidence of 40 to 120 per 100000[2]. NPC differentiate itself from other head and neck carcinomas by its particular anatomic limits, viral carcinogenesis, remarkable radio and chemo sensitivity[3] and clinical outcome[4].

We retrospectively reviewed the medical records of 83 patients with NPC diagnosed and treated at the Ear-Nose-Throat department of the Military Hospital of Tunis Tunisia between 2000 and 2013. The patients who weren’t followed in our department and those who didn’t sign the written consent were excluded from the study. The median follow up time was 37 mo (range: 18-108 mo). Parameters recorded were the clinical, paraclinical, therapeutical and evolutive features of the disease. The follow-up started by the detection of the complications of radio-chemotherapy and was prolonged during many months after the end of treatment.

In this retrospective and descriptive study, 83 patients have been reported. For quantitative data, the mean and the standard deviation have been obtained. For qualitative data, the percentage of each sub-group has been calculated. The statistical method is adequate because there was no comparison between the variables. P-value was not calculated since no hypotheses are tested in the study.

The main presenting symptom was epistaxis (50%), followed by a neck mass (43%), serous otitis media (38%) and headache (14%). Fourteen per cent of the patients had a cranial nerve deficit at the time of diagnosis: cranial nerve VI (40%), III (38%), IX (4%), XI (4%) and VII (4%). Clinical cervical adenopathies were diagnosed in 36 patients (43%). A bilateral neck adenopathy was seen in 23% of the cases and 17% had neck nodes > 6 cm (N3). The diagnosis was made in all the cases through a nasal endoscopy with a histopathological exam that confirmed the type of the tumor. The histological type was an undifferentiated carcinoma (UCNT) in all the cases. All the patients benefited from a radiological exam to explore the tumor location and its extensions (Figure 1). A CT-scan was done in all the cases associated to MRI for 2 patients. Bony scintigraphy was indicated only in locally advanced tumors and in case of bone pain. Our patients were staged conforming to the American joint committee on cancer staging system 1997. Thus, 15% had T1 tumors, 20% had T2, 23% had T3 and 41% had T4 disease (Table 1).

The therapeutical approach was decided upon a multidisciplinary committee. Only 12 patients had exclusive radiotherapy (50-70 Gy delivered to the nasopharygeal region and the cervical node areas). The remaining of our patients had concomitant radio-chemotherapy consisting of 3 cycles of cisplatin and 5-Fluorouracil (5-FU) along with a total radiation dose of 70 Gy over 7 wk.

Figure 2 Cerebral osteonecrosis of the nasopharynx 3 mo after the end of radiotherapy.

During chemotherapy, a pancytopenia associated with fever was noted in 17% of the cases however, a toxic renal failure was diagnosed in one patient (Table 2).

The median follow-up period was 37 mo (18-108 mo). During this period, 10 patients were lost. The follow-up let us to seek in time the occurrence of a relapse of the disease or the appearance of distant metastasis.

Distant metastasis developed in 14% of the patients (Figure 3). The sites of these second localizations are resumed in Table 3. A concomitant radio-chemotherapy was indicated in all the cases. One patient had loco regional failure at the time of distant metastasis. The average time for the occurrence of metastasis was 27 mo (24 to 36 mo). 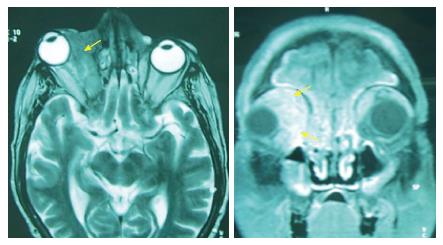 Two of the patients treated with remedial chemotherapy received a course of Capecitabine (Xeloda) used as rescue treatment. One patient died after a severe pancytopenia and one is still alive at the time of the study. During the period of follow-up, two other patients died after massive and multifocal metastasis.

NPC is a rare neoplasm that affects countries with different incidences. Its distribution on the world shows a high incidence in China[5] and a low incidence in Western Europe and in the United States[6]. Concerning our country and in North Africa in general, the incidence of the tumor is nearly 4/100000[1].

In our study, the average age of the patients was 49 years with a sex-ratio of 6.5. These findings are not usually found in other countries since age distribution of NPC is different from one geographic region to another[7,8]. In Asian series, it is observed that cases occur mostly in the fifth and sixth decade of life[9]. However, a bimodal distribution is observed in North African series: a first peak around 20 years and a second one at 50 years of age[10,11].

Most times, the diagnosis of NPC is based on nasal symptoms: epistaxis and/or unilateral nasal obstruction. The disease is clinically obvious by the association to cervical lymph nodes, serous otitis, tinnitus, or signs of cranial nerve involvement[12]. However, these symptoms are not specific to NPC and atypical clinical manifestations are noted in aggressive or extensive forms of the tumor[1]. Therefore, it is imperative to have an accurate initial clinical exam of the cervical lymph node groups and the cranial nerve functions.

The staging and the accurate evaluation of NPC extension are based mainly on magnetic resonance imaging (MRI) and cervico-facial CT-scan[13]. Both imaging methods complement each other. In fact, CT detects better the lytic bone lesions, while MRI provides an accurate visualization of the tumor limits and the soft tissue extension[14].

NPC is considered as a radiosensitive tumor and, therefore, radiotherapy is the main treatment in almost all the cases. The local control rates in patients treated by radiotherapy remains generally acceptable with good results (80%-90%) in T1 and T2 stages, whereas worse outcomes are observed in locally advanced diseases with a higher risk of local recurrence and metastasis[15]. At a 5 year follow up, the authors reported various results with regard to the rate of relapse noted especially in locally extensive tumors[15-17]. In our study, the average period for the occurrence of recurrence was 24 mo and for distant metastasis was 27 mo.

When it comes to acute radiotoxicity, oral mucositis is the most frequent complication, followed by dermatitis and alterations in taste. The most frequent late toxicities are hyposialosis, xerostomia and dental complications which may be prevented by oral hygiene measures and fluoride use[18].

Regional recurrences and distant metastasis are not uncommon with NPC, even after completing the therapeutic approach[19]. Thus, a long term follow-up is mandatory for many years after treatment.

While comparing our results with the southern Asian NPC series, we noted that we had in our group better results in term of overall survival rate. The rates of metastasis were quite similar to those reported by Wang et al[20] and Goto et al[21] but lower than the results of Kawashima et al[22] (Table 4).

In case of recurrent and metastatic NPC, different protocols of chemotherapy have been used[23]. The most active chemotherapeutic agents include Cisplatin, Bleomycin, Doxorubicin and 5-Fu[24]. Chemotherapy can be neoadjuvant, adjuvant or concomitant to radiotherapy[1]. In our study, most of our patients were treated by concomitant chemo radiotherapy. This approach mainly aims to provide a much better control of the disease[25].

Bone and pulmonary metastases from nasopharyngeal carcinoma are the most common type of distant metastasis and represent the main etiology of fatal outcome in these patients[26].

A second radiation therapy is often indicated in case of local relapse[1]. However, second-line chemotherapy with Cisplatin seems to be the most effective protocol to treat the NPC metastatic lesions even if this therapy doesn’t improve significantly the long-term mortality[27].

New drugs are actually in trial stage for treating recurring and metastatic nasopharyngeal carcinoma: gemcitabine, capecitabine and paclitaxel[23,28]. A chinese study has shown that a monotherapy with capecitabine (Xeloda) has shown a significantly better survival rate[29].

NPC is a particular type of head and neck cancer characterized by a specific therapeutic approach and outcome. The most important issue with this tumor remains the high risk of relapse and/or distant metastasis especially in advanced stages of NPC. A long term follow-up is mandatory to detect early these complications.

Nasopharyngeal carcinoma is distinct from other head and neck carcinomas because of its particular anatomic location, distinct pathologic features, ethnic pathogenesis and specific clinical outcome.

The study describes the results of the follow-up of patients treated for a nasopharyngeal carcinoma (NPC) in term of iatrogenic complications and long-term recurrence or metastasis of the disease.

The follow-up, during and after the end of treatment for NPC, must be careful and prolonged since locoregional recurrences or metastasis may occur after many years.

The authors must retain that despite its excellent radiochemotherapy response and general good prognosis, a careful follow-up of patients with NPC is necessary to detect and manage any iatrogenic complications, locoregional recurrence or metastasis of the disease.