The tympanic (Jacobson’s) nerve is a useful anatomical structure in the middle ear with both practical and physiological functions extending beyond its origin. The paper reviews its clinical anatomy in adults and its surgical significance. English language articles from 5 major databases and Google scholar search engine were used to identify papers outlining the anatomy of the tympanic nerve, associated pathology and surgical relevance. In the majority of cases the tympanic nerve arises from the inferior ganglion of the glossopharyngeal nerve traversing through the tympanic canaliculus into the middle ear. On the promontory it coalesces with sympathetic fibres from the carotid chain forming the tympanic plexus which has individual variability. Functionally, as well as giving off parasympathetic fibres to the parotid gland via the lesser petrosal nerve, it is a useful anatomical landmark for cochlear implantation. The surgical importance of the tympanic nerve is not only restricted to middle ear surgery; it also extends to salivary gland disorders. The tympanic nerve remains clinically relevant to the modern otolaryngologist and as such a detailed understanding of its anatomy is crucial.

Core tip: The tympanic nerve is the first branch arising from the inferior ganglion of the glossopharyngeal nerve. Despite its modest size it has a multitude of functions which are not only limited to the middle ear. In this review we detail the clinical anatomy of the tympanic nerve and its surgical applications in Otolaryngology as they have evolved over the years. We also provide a brief summary of the life and achievements of the indefatigable Ludwig Levin Jacobson, an anatomist and military surgeon, who is credited with the discovery of the tympanic nerve.

This review describes the present evidence outlining the anatomy, function and surgical significance of the tympanic nerve.

We have summarised the anatomy from its origin and traced its course through the relevant anatomical segments namely extra tympanic; hypotympanic; and intratympanic. We also elucidate its role in middle ear innervation and secretomotor supply to the parotid. The surgical relevance of the tympanic nerve and the relevant pathological processes are also covered in detail. Further, we have detailed, a historical perspective on the intriguing life of Ludwig Levin Jacobson who is credited with the discovery of the tympanic nerve. For clarity we will use the term tympanic nerve throughout the article although the term “Jacobson’s nerve” is used synonymously throughout the literature.

We conducted a systematic review using Pubmed, Medline, Embase, Google Scholar, Web of Science and the Cochrane library in January 2014. Databases were searched using the term “Jacobson’s/tympanic nerve” before exploring the relevant subheadings. Results were limited to articles published in English. The abstracts were reviewed and most relevant selected for inclusion. Citation links were hand searched to identify further articles of relevance.

DISCOVERY OF THE TYMPANIC NERVE: ROLE OF LUDWIG LEVIN JACOBSON

Ludwig Levin Jacobson was born in Copenhagen on 10th January 1783 to a family of jewellers[1]. After attending a German school in Stockholm he returned to surgical training in Copenhagen[1,2]. His interests included human anatomy, zoology, chemistry and teaching. He is credited with various anatomical discoveries in animals and most importantly in humans[1,2]. As early as 1809 he discovered a previously undetected vomeronasal organ found in the nasal cavities of mammals only fully understood over a hundred years after his death[2]. In 1813 he would first describe the tympanic nerve outlining its anatomical relations and physiological function[1,2]. Later he also detailed the anatomy and function of Jacobson’s canaliculus (tympanic canaliculus) and “Jacobson anastomosis” plexus (tympanic plexus)[1]. By the time of his death in 1843 he had become a Professor and the King’s personal physician[1].

The tympanic nerve is the first branch arising from the inferior ganglion (petrous ganglion) of the glossopharyngeal nerve as it exits the jugular foramen[3-5] (Figure 1). Anatomical variations of its origin are rarely reported. Historically Arnold, cited by Donaldson, noted that the tympanic nerve may occasionally arise at a higher point than the inferior ganglion of the glossopharyngeal nerve and Cuvellier, also cited by Donaldson, suggested that it could arise from contributions from both cranial nerves IX and X[6]. These findings have not been supported by more recent studies. 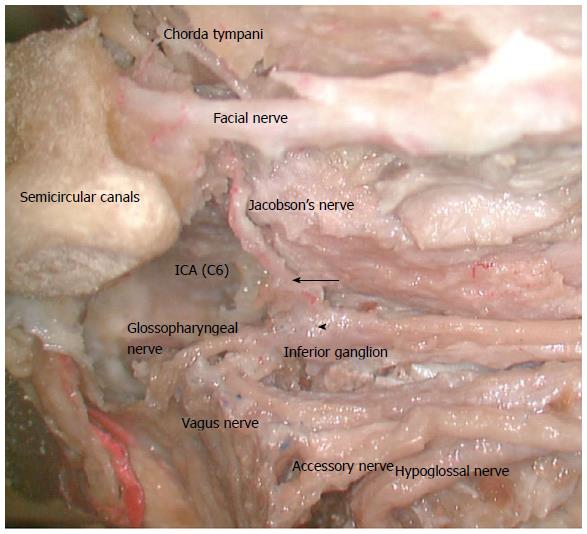 The anatomical study of the tympanic nerve by Tekdemir et al[7] using ninety-six cadaveric temporal bones states that it arises from the inferior ganglion which is located at a mean distance of 11.3 mm from the genu (knee like bend). It invariably angulates at 90 degrees inferior to the genu en route to the tympanic canaliculus[7]. 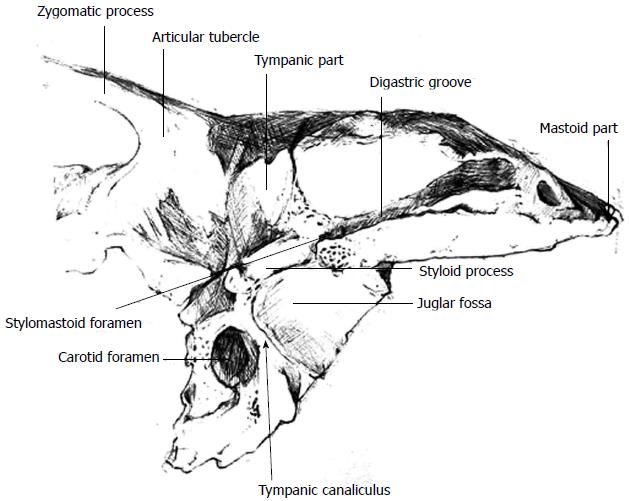 Figure 2 Illustration of the temporal bone demonstrating the relationship between the tympanic canaliculus, the carotid foramen and the jugular fossa.

Porto et al[3] (20 specimens) and Tekdemir et al[7] (96 specimens) both reported findings of the tympanic nerve being covered in bone in its entire course in 5% and 20% of their specimens respectively. Donaldson, in a study of 50 temporal bones, observed that in 6% of the specimens the tympanic nerve ran part or its entire middle ear course deep to the bone of the middle ear and that in these cases there was no hypotympanic branch[6].

An aberrant course of the tympanic nerve where it coursed anteromedially within the bony septum before entering the middle ear anteriorly accompanied by the sympathetic branch from the internal carotid sympathetic plexus was reported in one of the specimens in the same study[6]. Another unusual finding was a unilateral duplication of the tympanic nerve[6]. 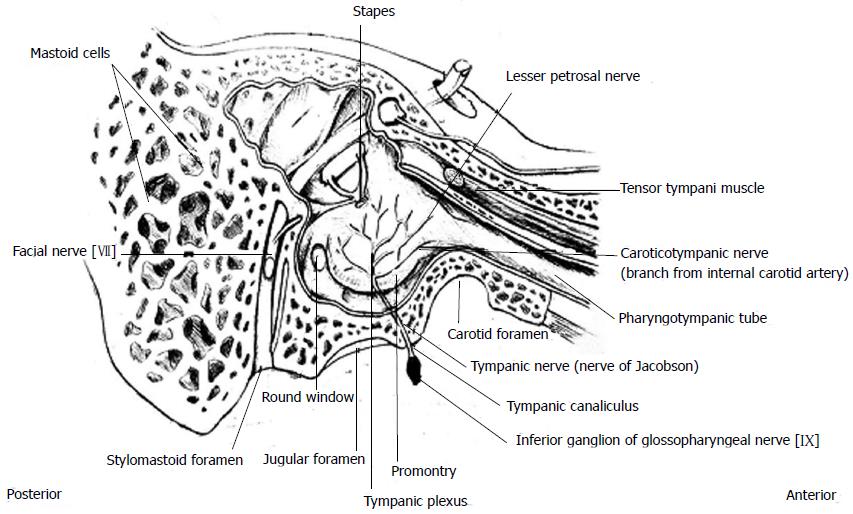 Figure 3 Schematic illustration of demonstrating the tympanic nerve from its origin (shaded in black), its course and its anatomical relations within the right middle ear.

Even though the tympanic nerve and plexus can be found in open grooves (submucosally) on the promontory, in approximately 20% of cases its branches are hidden in bony canals of varying depth making it difficult to locate[18]. Additionally, the nerve and plexus exhibit a multitude of variations as to course, branching and anastomoses. In fact there is no bilateral symmetry; each plexus is unique[18].

The tympanic nerve has a close anatomical relationship with the cochlea; it extends superiorly directly underneath the cochleariform process[19]. Furthermore, it acts as a useful marker in identifying the anterior and posterior parts of the basal segment of the scala tympani of particular relevance in cochlear implantation[8,14,20]. Both segments are in close relation to the hypotympanic cells, infralabyrinthine cell tracts and the jugular bulb[8,14]. The preganglionic parasympathetic fibres reconstitute posteriorly to the cochleariform process, eventually lying medial to it coursing superiorly across the promontory towards the geniculate ganglion of the facial nerve[8].

The tympanic nerve exits the middle ear through its own canal below the tensor tympani muscle or through the canal for the tensor tympani muscle as the lesser superficial petrosal nerve[20]. From the anterior surface of the temporal bone the lesser superficial petrosal nerve exits the middle cranial fossa via foramen ovale or the emissary sphenoidal foramen (canal of Vesalius) en route to the otic ganglion conveying presynaptic parasympathetic fibres[21]. The post ganglionic fibres travel with the auriculotemporal nerve, a sensory branch of the mandibular division of the trigeminal nerve to provide the parasympathetic innervation of the parotid gland[11] (Figure 4). 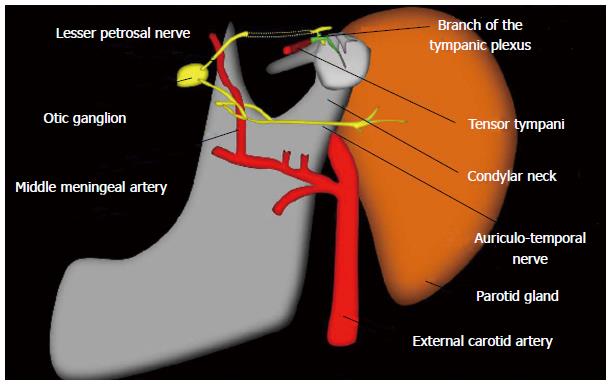 Figure 4 Illustration depicting the link between the tympanic plexus (formed by the tympanic nerve) and the parasympathetic supply to the parotid via the lesser petrosal nerve and the otic ganglion. (Used with permission from Dr. José M. García Santos, MD, PhD, Head of the Radiology Department, University Hospital Morales Meseguer, Murcia, Spain).
FUNCTION

The tympanic nerve is covered in bone for most of its course and is unlikely to be damaged in trauma; injury would indicate severe force[26]. The nerve can be involved in non-traumatic pathological processes along its course, particularly within the foramen[9]. Glomus jugulare tumours, which tend to be slow growing in nature, are the commonest tumour found in the jugular foramen[9]. They have a preponderance to form along the tympanic and Arnold’s nerves as well as in the adventitia of the internal jugular vein[9,27]. In advanced stages they tend to be multidirectional in growth and owing to the narrowness of the jugular foramen may expand and erode to into cranial nerves IX to XII[9].

Post-surgical traumatic neuromas of Jacobson’s nerve have been reported, usually occurring in the context of previous middle ear surgery where the tympanic nerve is damaged or severed (intentionally or otherwise) leading to formation of neuromas from nerve growth around the amputated stump, leading to recurrent otalgia[28].

Lempert first described tympanic plexus ablation for the relief of tinnitus in 1946, referring to it as tympanosympathectomy[29]. Clinical use of the procedure faltered owing to unsatisfactory results. Hemenway later suggested interruption of the efferent neuronal pathway at the level of the middle ear by sectioning the tympanic nerve as a theoretical approach to the management of Frey’s syndrome[30]. However, the procedure was later popularised by Golding-Wood who used it for the successful treatment of Frey’s syndrome coining the term tympanic neurectomy to describe it[31]. In addition to the management of Frey’s syndrome, Golding-Wood postulated other indications for the procedure notably, paradoxical gustatory lacrimal reflex “crocodile tearing” and chronic secretory otitis media although these have no indication in modern clinical practise[21]. Tympanic neurectomy has been considered useful in the management of otalgia with the proviso that other important causes of otalgia have been excluded[22].

Owing to the potential serious complications of parotidectomy, duct ligation or radiotherapy as alternative forms of treatment for these conditions, tympanic neurectomy can be undertaken with little morbidity or operative discomfort[17]. A case series of ten patients for parotid sialectasis managed with tympanic neurectomy in the United Kingdom by Daud et al[17] demonstrated symptom alleviation in seven patients and as such is advocated by the authors as a first-line surgical procedure for such symptoms with parotidectomy in reserve.

To perform the procedure a tympanomeatal flap is raised to expose the promontory and hypotympanum[32]. Success of tympanic neurectomy lies in complete division of the tympanic nerve below its lowest intratympanic branch with the corollary that promontory branches are less significant to the success of the procedure[33]. As such adequate exposure may require drilling of the bony annulus inferiorly until the floor is flush with the hypotympanium[33]. Drilling is required medially below the basal turn of the cochlea to sever all nerve filaments[19]. A comprehensive understanding of the different anatomical segments, variations and most importantly the potential of the tympanic nerve being partially covered in bone as highlighted above is therefore crucial in the success of this procedure.

In more recent years the tympanic nerve has gained favour as a useful anatomical landmark in cochlear implantation where the classical approach to the scala tympani through the round window niche by way of facial recess is impossible[8,14]. Successful intubation of the scala tympani in such instances utilises the anatomical proximity of the tympanic nerve to the round window and the cochlea as has already been highlighted[8,14].

The tympanic nerve remains an anatomical area of complexity that is easy to overlook yet functionally its relevance to the modern clinician is ever more pertinent. It is increasingly regarded as an important operative marker in cochlear implantation due to its anatomical relations and continues to retain an important role in the management of salivary disorders. In appreciating its anatomical path, we gain an improved understanding of the arrangement of the middle ear and its dual relevance to both anatomists and surgeons.