Core tip: The current report describes the indications, design and technique of the extended pectoralis major flap in reconstructing challenging defects in the head and neck region. The flap has been shown to be safe and robust, and offers an important reconstructive option.

The pectoralis major flap was first described in 1968[1] and later popularized for head and neck reconstruction by Ariyan[2] in 1979. Due to its ready availability, ease of harvest and reliability, it soon became the choice of reconstruction for post-ablative defects in the head and neck region. Currently however, free tissue transfers, which offer superior pliability and ability to be contoured to the defect, have largely superseded the pectoralis major flap. Nevertheless, the latter retains an important place in contemporary head and neck reconstruction, particularly in resource constrained settings, high risk patients and as salvage after free flap failure.

The principal blood supply to the flap is from the thoracoacromial artery, a branch of the axillary artery that enters the deep muscle surface from beneath the middle third of the clavicle. In most large series, the skin paddle has been limited to within the surface area of the pectoralis major muscle, i.e., territory supplied by the thoracoacromial artery, as extension beyond this border is thought to compromise blood supply[2,3]. In this report, we describe our experience with the extended pectoralis major flap, wherein the skin paddle was extended beyond the inferior border of the pectoralis major to include rectus sheath. 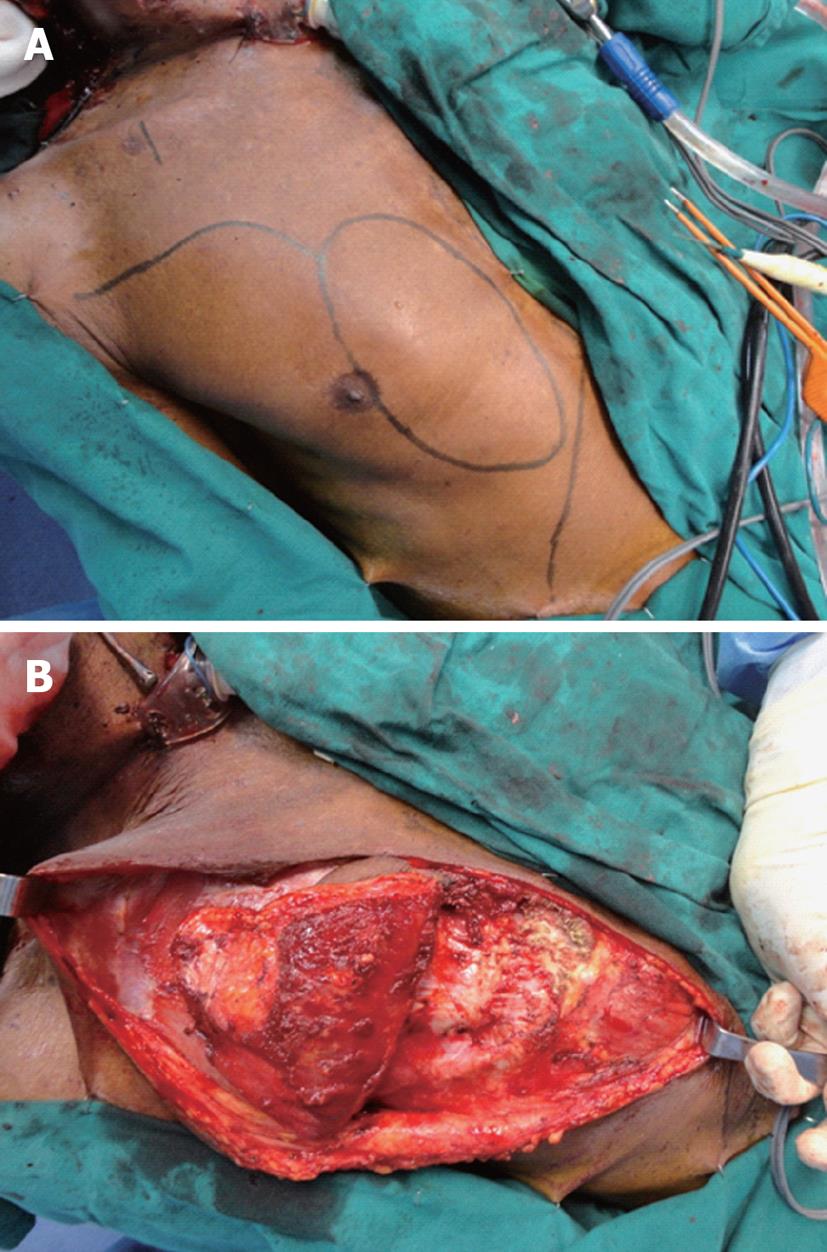 In the postoperative period, normal saline was infused at the rate of 100-120 cc/h for the first 24 h. Urinary output was monitored with the Foley catheter in-situ to ensure it remained above 50 cc/h. Packed red blood cell was transfused to maintain blood hemoglobin concentration at or above 9 g/dL. Oral or nasogastric tube feeding was commenced 24-48 h following surgery and gradually increased to approximately 3 L/d at which point intravenous fluids was completely stopped. The patient’s head was kept elevated by 45 degrees and maintained in a neutral position as far as possible. On the first postoperative day, the patient was made to sit in a chair and daily chest physiotherapy was commenced. Ambulation was started on the second postoperative day, and the Foley catheter was typically removed on the third day. In cases that required mucosal repair, nasogastric feeding and nil by mouth orders were continued until at least the 14th postoperative day and full healing of mucosal incision lines. Flap viability was checked on the first postoperative day by needle prick and then by visual inspection of skin color and turgor on a daily basis until discharge from hospital. Any loss of viability, such as skin necrosis, was recorded.

A total of 7 cases of extended pectoralis major myocutaneous flap repairs were done. Patient demographics are given in Table 1. No patient had received preoperative radiotherapy. The distal tip of the skin paddle extended beyond the lower border of pectoralis major by 2-5 cm. In all cases, this cut distal margin was confirmed to exhibit brisk bleeding during harvest. The indications for the extended flap were large defects of mucosal and/or skin surface, high defects involving soft palate or extending up to and beyond the temporal line, and complex, multi-dimensional intraoral defects requiring tension-free circumferential closure. Patients 3 and 7 had full thickness defects of the cheek with loss of skin, buccal soft tissue and mucosa. In the former patient, the surface area of the cutaneous defect was near-identical to that of the buccal defect (5 cm × 4 cm), while the cutaneous defect was much smaller (2 cm × 1 cm) in the latter. The skin paddle of the flap was used to resurface the cutaneous defect in the former and the buccal defect in the latter. The corresponding large buccal and small external cutaneous defects were reconstructed with split skin grafts. The donor site was closed primarily in 6 cases and a local rotation flap was required in 1 case. No patient required a second simultaneous flap for reconstruction (Figures 2-5). 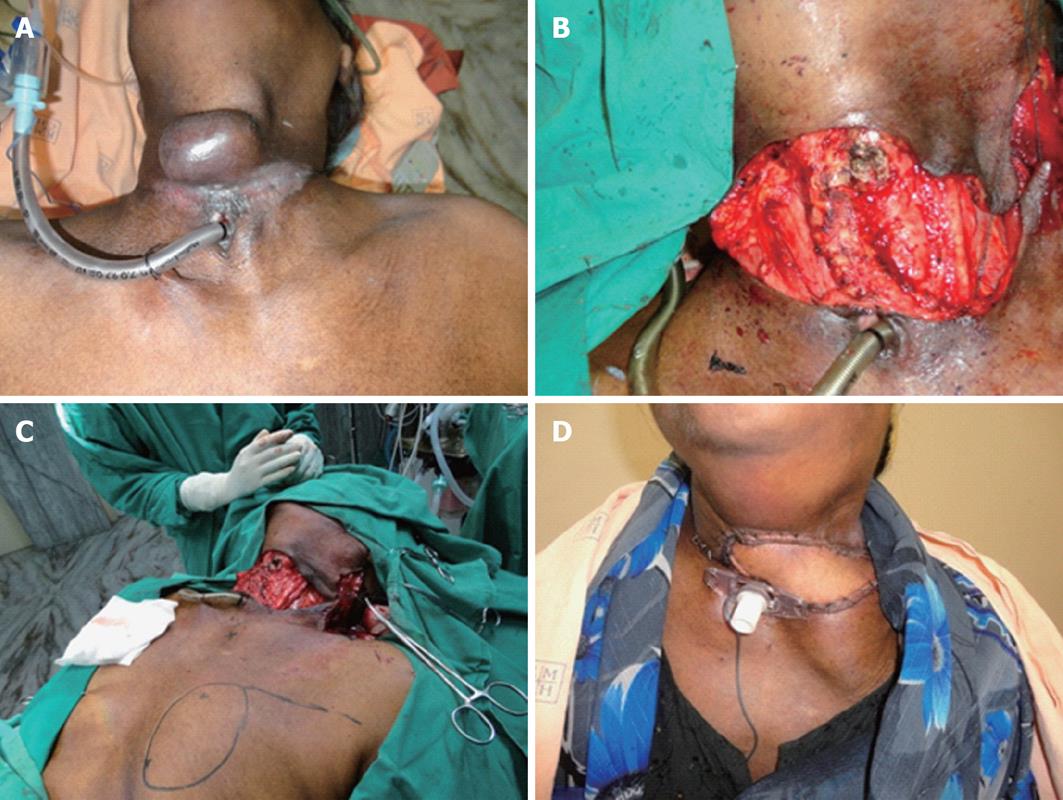 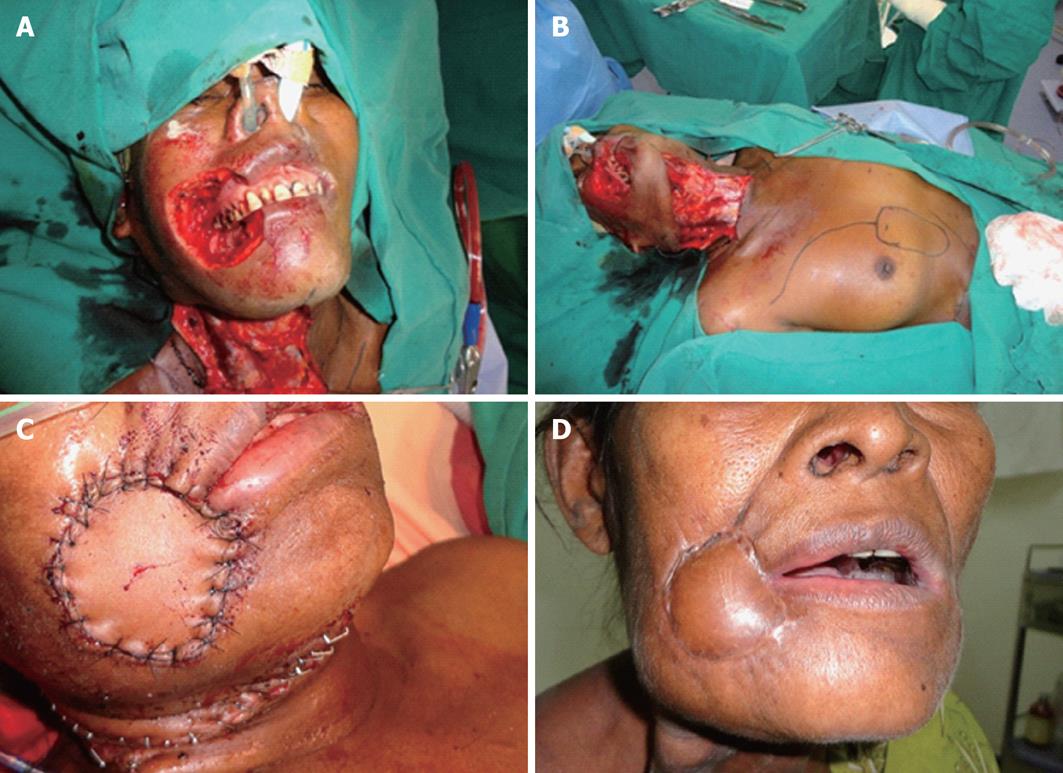 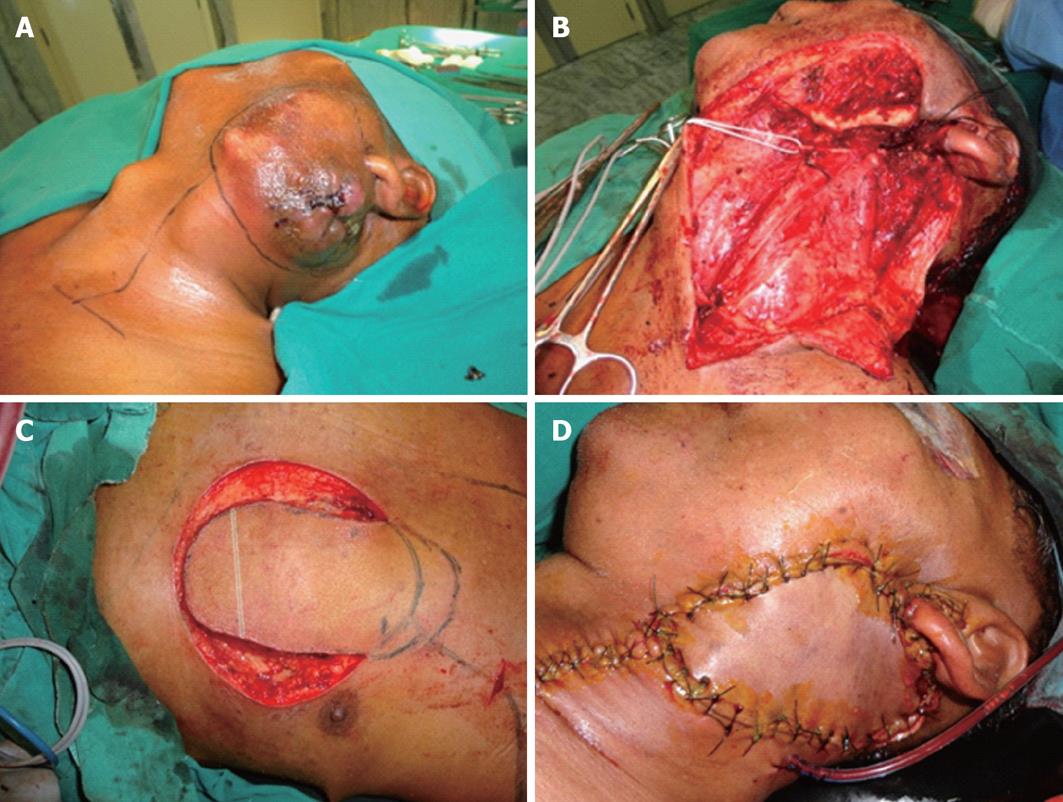 One patient developed a seroma in the neck anterior to the flap muscle that settled on repeated aspiration. Two other patients developed orocutaneous fistula that healed by daily dressing. All flaps survived fully with no loss of skin viability or necrosis over a minimum follow-up of 60 d. Similarly, there was no major donor site complication.

The main blood supply to the pectoralis major is the thoracoacromial artery. There are two other vessels supplying the muscle: internal mammary artery with its perforating branches and lateral thoracic artery. The internal mammary vessels continue into the rectus sheath as the superior epigastric artery and vein with large perforators in the periumbilical region of the abdomen. The cutaneous vascular territories of these three vascular systems overlap to supply the skin of the anterior chest and upper abdomen[4]. Cadaveric dye injection studies have confirmed overlap of the skin territories of perforators from the internal mammary, superior epigastric and thoracoacromial systems over the sternum and upper abdominal wall[4,5]. It has been shown that in some cases, the skin paddle of the traditional pectoralis major flap can have a limited supply by the thoracoacromial artery, with the remaining area borne by the perforating branches of the internal mammary artery[6,7]. Extending the skin paddle inferiorly to include the rectus sheath as done in this report can capture the rich fascial vascular plexus of the lower chest and anterior abdominal wall. The distal skin must be designed in a curvilinear fashion to avoid a sharp tip and include the fascia covering the anterior abdominal wall to maintain the fascial vascular plexus. Proximally, the skin island must be designed to overlie the pectoralis muscle to allow the thoracoacromial perforating vessels access into the distal fascial plexus. The edges of the rectus sheath and superficial layers of pectoralis muscle must be sutured to the corresponding subcutaneous layer of the skin paddle to prevent shearing and loss of blood supply. Further harvest must be done gently, avoiding tension or torsion of the pedicle. Similarly, when muscle around the pedicle needs to be thinned, care must be taken to avoid thermal or crush injury to the pedicle. Provided these principles are strictly adhered to, we believe an inferiorly extended skin paddle can be safely harvested, avoiding previously reported complications with the pectoralis major flap[8-10]. Further, the distance between the lower skin margin and the inferior border of the pectoralis major muscle has been limited to 5 cm or less in this report. Future studies may assess whether further extension of the skin paddle inferiorly is feasible.

The indications for the extended flap in this report were large defects of mucosal and/or skin surface, high defects involving soft palate or extending up to and beyond the temporal line, and complex, multi-dimensional intraoral defects requiring tension-free circumferential closure. In our assessment, the traditional pectoralis major flap would have been insufficient for tension-free resurfacing of these defects. Even though a few flaps in this series had a relatively smaller skin paddle size, the extended flap conferred the advantage of superior reach, rotation and contouring for high and complex defects. We believe the extended flap overcomes several of the limitations imposed by the traditional pectoralis major flap by conferring a larger skin paddle for big defects and superior reach for high defects, thereby minimizing tension and overall compromise of blood supply to the flap. It is plausible that some of the complications reported previously with the pectoralis major flap[8,9] might have been avoided by utilizing the extended flap. Done in an appropriate manner as outlined here, the extended flap increases the versatility of pectoralis major myocutaneous flap in head and neck reconstruction.

Post-ablative head and neck defects that involve large surface areas of the skin and/or mucosa, or extend high to involve the soft palate or up to and beyond the temporal line, are challenging to reconstruct. In this report, the extended pectoralis major myocutaneous flap has been shown to be ideal for repairing these large and complex defects. Further larger studies are required to confirm and expand our findings.