Aimed to test the hypothesis that endolymphatic hydrops in Meniere’s disease (MD) may be secondary to otitis media, history of a patient who developed MD as a complication of otitis media was reviewed. The inner ear was imaged using a 3.0 Tesla MR system post-intravenous injection of gadolinium-tetraazacyclododecane-tetraacetic acid (Gd-DOTA) in a standard single dosage (0.1 mmol/kg). Both t2-spc-rst-tra-iso (T2-weighted) and heavily T2-weighted 3-dimensional fluid-attenuated inversion recovery magnetic resonance imaging [hT(2)W-3D-FLAIR] sequences were applied. As a result, in the T2-weighted images, the perilymph and endolymph, cerebrospinal fluid surrounding the eighth nerve (N8), and middle ear granulation tissue showed intense signals. In the hT(2)W-3D-FLAIR images, evident enhancement by Gd-DOTA was observed in the middle ear cavity and the perilymphatic compartments of the cochlea. Cochlear endolymphatic hydrops was implicated by the enlarged scala media in the basal turn. In general, the Gd-DOTA uptake in the vestibule was weak, and signs of vestibular endolymphatic hydrops were obvious. The N8 on the diseased side was also significantly enhanced. To conclude, endolymphatic hydrops in MD may be induced by otitis media. Cochlear endolymphatic hydrops in MD secondary to otitis media may not follow the classical pattern.

In 2008, a 45-year-old man in the outpatient otolaryngology department presented with vertigo, tinnitus, and hearing loss in the right ear. The patient had diabetes, obstructive sleep apnea, unilateral hydronephrosis, and hypertension. In 2000, the patient awoke with vertigo that was provoked by positional changes. In a detailed examination, spontaneous left-beating nystagmus was noted. After performing Epley’s maneuver, the vertigo was resolved. The patient did not complain of hearing loss or tinnitus. In 2007, the patient experienced rotary vertigo and vomiting without any noticeable hearing loss after strenuous carpentry work. In a clinical evaluation, the patient showed spontaneous left-beating nystagmus and was diagnosed with right-sided vestibular neuritis. The vertigo faded slowly over the course of several weeks. At the beginning of 2008, the patient experienced tinnitus and hearing loss in the right ear. A closer evaluation detected glue ear on the diseased side. An audiogram showed conductive high frequency hearing loss of 40 dB (Figure 1A). After paracentesis, a tympanostomy tube was inserted and the patient was followed more closely. The hearing loss prevailed (Figure 1B and C), and the spiral CT showed a fluid-filled cellular system in the middle ear. A mastoidectomy was performed, but the middle ear problems did not subside, and the middle ear ventilation did not improve. In an endoscopy of the Eustachian tube, the posterior cushion and the torus tubarius was swollen in a cherry-like manner. The vertigo symptoms worsened, and the patient experienced several weekly vertigo attacks. In February 2011, an inner ear MRI was performed using a 3 Tesla MR System with a 32-channel head coil and an additional ear coil (Siemens Trio-Tim, Erlangen, Germany) with 4 h post-intravenous injections of gadolinium-tetraazacyclododecane-tetraacetic acid (Gd-DOTA). The vertigo attacks continued at the same level of severity. In September 2011, laser Eustachian tuboplasty and exploratory tympanostomy with installment of tympanostomy tube were performed. After the surgery, the patient was nearly asymptomatic except for one mild vertigo attack. Subjectively, the patient’s hearing also improved (Figure 1D). At present (June 2012), the patient has no vertigo symptoms. 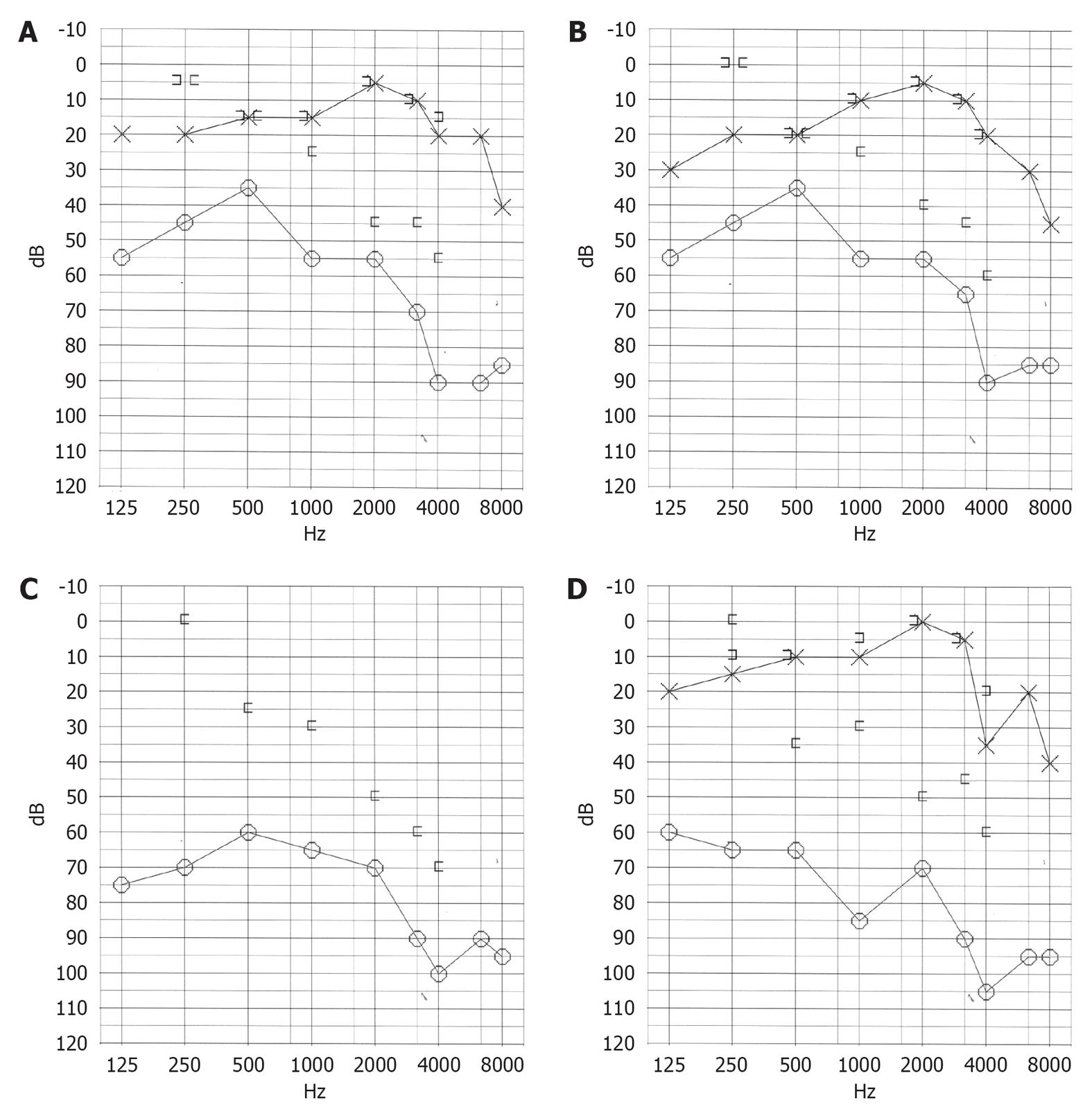 In the T2-weighted images, the perilymph and endolymph of the inner ear, cerebrospinal fluid (CSF) surrounding the eighth nerve (N8), and middle ear granulation tissue showed intense signals (Figure 2A-E). There were slightly signal intensity differences between the left [224.5 arbitrary unit (AU)] and right cochlear basal turn (216.5 AU) and the left (239.3 AU) and right vestibulum (236.5 AU). In the hT(2)W-3D-FLAIR images, evident enhancement by Gd-DOTA was observed in the middle ear cavity and the perilymphatic compartments of the cochlea. Cochlear endolymphatic hydrops was implicated by the enlarged scala media in the basal turn (Figure 2B). In general, the Gd-DOTA uptake in the vestibule was weak, and signs of vestibular endolymphatic hydrops were obvious (Figure 2B). The N8 on the diseased side was also significantly enhanced (Figure 2F).

Figure 2 Magnetic resonance imaging of the inner ear acquired with a 3 Tesla machine. In the T2-weighted images (A, C, E), intense signals in the perilymph and endolymph of the inner ear and cerebrospinal fluid (CSF) surrounding the eighth nerve (N8) and the middle ear cavity (ME) were demonstrated. In the heavily T2-weighted 3-dimensional fluid-attenuated inversion recovery magnetic resonance images, evident enhancement by gadolinium-tetraazacyclododecane-tetraacetic acid (Gd-DOTA) was detected in the middle ear cavity and the perilymphatic compartments of the cochlea. Suspected endolymphatic hydrops was indicated by the enlarged scala media at the basal turn [arrowhead in the enlarged window of (B)]. In general, the Gd-DOTA uptake in the vestibule was weak, and endolymphatic hydrops became obvious in the vestibulum (V) and ampulla of the semicircular canal (Am) [enlarged window of (B)]. Gd-DOTA uptake in the perilymph of superficial semicircular canal was detected in the diseased ear (D). No uptake of Gd-DOTA was demonstrated neither in the lateral semicircular canal nor in the posterior semicircular canal. The N8 (in F) on the diseased side showed significant enhancement. LSCC: Lateral semicircular canal; PSCC: Posterior semicircular canal; SSCC: Superior semicircular canal.
DISCUSSION

This is the first case to show endolymphatic hydrops in vivo in a patient with MD secondary to otitis media. In the literature, vestibular pathology secondary to otitis media has been shown by objective measurement of the vestibular function[6,7]. A potential pathway for inflammatory cytokines and even pathogens to enter the vestibular system through the annular ligament across the stapediovestibular joint has been hypothesized by Zou et al[8] in an in vivo MRI study. In the present case, the severity of endolymphatic hydrops was greater in the vestibulum than in the cochlea, which supports the Zou et al[8] hypothesis.

One ultrastructural study has shown that the middle ear side of the footplate of the stapes had histopathological changes in patients with otitis media, although the vestibular side remained essentially unchanged[9]. Although involvement of the stapes in otitis media is likely common, the possibility that infection agents or products of inflammation may cross the porous annular ligament into the vestibule must be considered.

Cochlear endolymphatic hydrops located at the basal turn suggested that the round window membrane may also be involved in the passage of pathogens or inflammatory agents into the cochlea. Papp et al[10] have reported that chronic suppurative otitis media induced sensorineural hearing loss related to high frequencies. Sensorineural hearing loss at 4 kHz gradually increased according to the duration of the chronic suppurative otitis media and was greater than that of speech frequencies. This result was explained by the closer location of the hair cells that are responsible for high frequency hearing at the base of the cochlea and the round window. According to the present case study and a previous animal study, we further hypothesize that cochlear endolymphatic hydrops in MD secondary to otitis media may not follow the classical pattern and spread from the apex to the basal turn and vestibulum[4].

The observed enhancement of the N8 indicates a local injury of the blood-brain barrier. It has been reported that activated neuritogenic T-cells alter the blood-nerve barrier when entering into the peripheral nerves, which provides circulating demyelinating antibodies access to the endoneurium[11]. Similarly, this process may occur in the N8 if immune reactions overreact.