The retrospective review of I-ring pupil expansion ring use is designed to examine the patient characteristics and associated surgical challenges in a clinical practice. The hypothesis is that I-ring provides a necessary additive tool in dealing with challenging cataract surgeries with small pupils.

To document the safety profile and use of I-ring pupil expansion ring in a clinical practice.

8 of 12 cases were planned I-ring cases. 1 case was decided intraoperatively when femtosecond laser caused the pupil to shrink. The other 3 cases were also decided upon intraoperatively when pupil was deemed to be small. 7 patients had IFIS from Flomax use. 2 patients had pseudoexfoliation syndrome as the cause of small pupil. 2 patients had narrow angles with brunescent cataracts. 2 patients had pre-op partial zonular dehiscence. 1 patient had 360o of posterior synechiae. 2 cases had ruptured posterior capsule that required anterior vitrectomy. No complications were attributed to the pupil expansion ring. A total of 296 cataract surgeries were performed that year by the surgeon, making the rate of pupil ring use 4.1%.

Small pupil requiring pupil expansion ring during cataract surgery is often associated with other challenges, such as brunescent cataract, zonular weakness, and posterior synechiae in this series. I-ring helped to reduce at least one challenge in these difficult cases.

Core tip: Pupil expansion rings are not new devices, however, to date, there are no clinical series that examines the nuanced factors that go into the decision and use of I-ring. This study provides a front-line peek at the use of I-ring.

Pupil expansion devices have made an impact on cataract surgery for many years now[1,2]. Small pupils obstruct the view during surgery and make for more challenging cases. Pupil expansion devices provide a safe, temporary method for expanding the pupil during surgery without permanently distorting the pupil, which can occur with manual stretching[3] or sphincterotomies[4]. The term, “surgical pupil” often came from these scenarios. These devices have become widely adapted into cataract practices worldwide.

The Malyugin Ring (MicroSurgical Technology, Redmond, WA) was the the most widely used pupil expansion device[5]. It simplified the insertion and removal by packaging it into an insertion device similar to IOL injectors. It provided a stable 4 point (later 8 points with 2.0 version) fixation that allowed for improved visualization and manipulation of cataract. The I-ring improved upon the design by employing a softer, more flexible polyurethane instead of the Malyugin Ring’s more rigid polypropylene material. The I-ring also engages 360o circumference of the pupil, distributing the expansion force throughout the pupillary margin instead of on select few points, which can result in distortion of pupil post-operatively. A pictorial depiction of a patient with use of these two different devices in each eye was published previously[6], showing a less traumatic pupil expansion by the I-ring.

There have been relatively few case series on pupil expansion devices[7,8], with most focusing on the complication rate or time of surgery involved. None have truly examined the pathologies and the decisions involved in a clinical practice. We undertook a more comprehensive examination of a single surgeon practice in one calendar year of 2016 to determine the underlying pathology, the decision, as well as the outcome of cases involving I-ring. The surgeon uses I-ring exclusively due to the above rationale.

A retrospective chart review of all I-ring cases were performed, recording demographic, pre-operative, intra-operative and post-operative data. Whether I-ring use was planned or decided upon intra-operatively was also recorded. Total number of cataract cases was determined by using the 66984 and 66982 CPT codes. All I-ring cases were documented as complex cataract cases. The cases were all performed by a single surgeon at the same ambulatory surgery center, Specialty Surgical Center of Arcadia, California. IRB approval was obtained from University of California, Los Angeles prior to initiation of this project. Funding was provided by Beaver-Visitec, International.

Twelve patients (6 male and 6 female) underwent 12 cataract surgeries with I-ring Pupil Expansion device. Average age was 77. 8 of 12 cases were planned I-ring cases. 1 case was decided intraoperatively when femtosecond laser caused the pupil to shrink. The other 3 cases were also decided upon intraoperatively when pupil was deemed to be small. 7 patients had IFIS from Flomax use. 2 patients had pseudoexfoliation syndrome as the cause of small pupil. 2 patients had narrow angles with brunescent cataracts. 2 patients had pre-op partial zonular dehiscence. 1 patient had 360o of posterior synechiae (Table 1).

A total of 296 cataract surgeries were performed that year by the surgeon, making the rate of pupil expansion ring use 4.1%. The rate of ruptured capsule in all surgeries was 1.0%. Of the small pupil cataract cases that required use of the I-ring, there were 2 ruptured posterior capsule that required anterior vitrectomy (16.6%). One was in a case of near 5 clock hours of pre-op zonular dehiscence and the other was in a case of dense, brunescent cataract without view to the retina. No complications were attributed to the pupil expansion ring. Excluding these more challenging cases, the rate of rupture posterior capsule would have been 0.4%. There was only one other anterior vitrectomy performed the whole year.

None of the cases were noted to have experienced difficulty inserting or removing the I-ring, including the case with 360o of posterior synechiae. Synechiolysis was performed with blunt-tip viscoelastic cannula, and the I-ring was easily deployed onto pupillary margin for intra-operative expansion. Insertion involved placement of one to three engagement points onto pupillary margin with the injector, followed by manual engagement of the remaining segments. Removal of all cases was carried out in one motion by grasping the distal ring segment at the notch and retracted into the injector sleeve.

The two partial zonular dehiscence cases were not fully recognized until the I-ring was engaged. The 5’clock hour dehiscence patient had pseudoexfoliation and it was immediately apparent upon I-ring deployment. The other case involved one to two clock hours and was recognized once phacoemulsification was initiated. The small amount of capsular bag instability did not create significant problems, and surgery was successfully completed without complication in that case.

It is apparent from this series that small pupils often accompany other pathologies that can make surgery more challenging[9,10]. These include IFIS[11], pseudoexfoliation, zonular dehiscence, and dense cataracts[12]. A small pupil adds an additional challenge to these already difficult cases, as is illustrated by the dramatic difference in the rates of ruptured posterior capsule[13,14]. However, with the availability of pupil expansion rings, these challenges can be overcome[15]. Pre-operative planning as well as having the device available in the OR provides solutions intraoperatively. For instance, with the cases of zonular dehiscence, pupil expansion allows for identification of zonular problem, and further interventions such as capsule tension rings[16] may be used to help avoid complications. Additionally, with the advent of femtosecond laser assisted cataract surgeries, another cause for intraoperative miosis is identified. Several previous papers have discussed use of pupil expansion rings either pre-femoto laser, or post to assist in miosis issue[17-20].

The choice of pupil expansion ring rests upon the ease of use and atraumatic insertion and removal. We have previously published a study demonstrating that the I-ring is less traumatic than the Malyugin Ring due to its softer material and 360o engagement design[6] (Figure 1). Because it is softer, it is slightly more difficult than the Malyugin Ring to engage 3 points of fixation upon injection. A Sinsky Hook with a longer tip, or a chopper can be used to manipulate the last fixation point into position. Once engaged, the expansion force is evenly distributed throughout the pupillary margin instead of concentrated at the fixation points. This leads to less distortion of the pupillary margin after surgery. 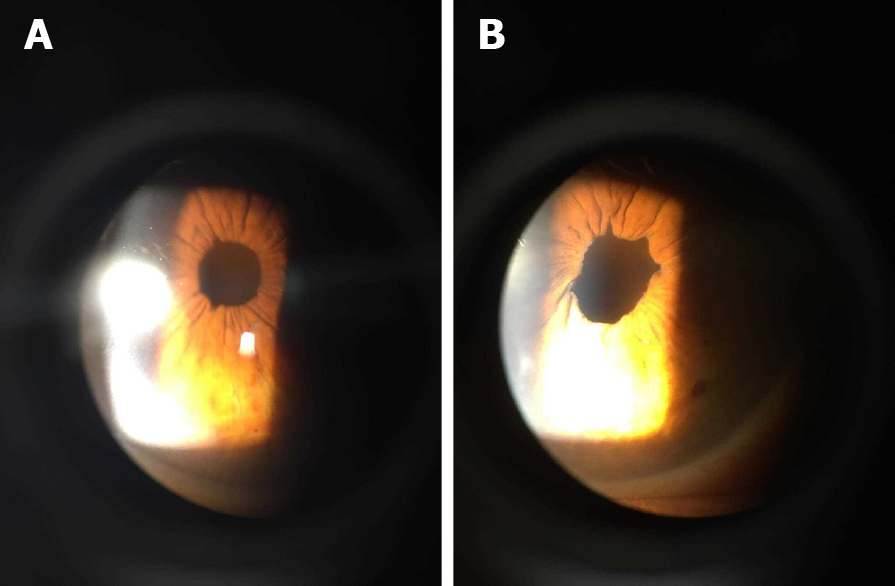 Figure 1 Post-op photos after cataract extraction with different pupil expansion rings in the same patient. A: with I-ring; B: with Malyugin Ring. I-ring eye showed significantly less distortion of the pupil after surgery. Previously published by the same authors.

During surgery, the I-ring does have a thicker, or higher anteroposterior profile, but due to its softer material, it gives way instead of obstruct phaco probe motion. The Malyugin Ring[21] has a thinner profile, but because it is stiffer, this can be felt with movement of the phaco probe. This however is usually a minor nuisance of no consequence. In cases with very shallow anterior chambers this may become a bigger issue. Removal of the I-ring, by contrast, is slightly easier, as it can be grasped and retracted into injector device in one smooth motion instead of having to manually disengage the ring first then retract into injector, as with the Malyugin Ring.

Pupil expansion ring is a valuable tool to have in the OR[23] for those challenging cases with small pupils that may accompany other difficulties[24,25]. To have one problem solved makes the others easier to deal with. The choice of expansion ring depends on surgeon preference[26]. The advantages and disadvantages of two leading rings were discussed. It is the opinion of the authors that the I-ring is less traumatic to the pupillary margin due to its softer material and 360o engagement design.

Pupil expansion rings are widely accepted as a useful tool in cataract surgery. However, there are no studies that compare different devices or examine in detail the decision to goes into the decision and clinical settings to use the device.

This study examines a new member of this class of device, providing advantages in design over previous devices. It also examines the co-morbidities associated with small pupil in the cataract milieu of 2019.

To document the safety profile and use of I-ring pupil expansion ring in a clinical practice. The study showed a better understanding of the challenges associated with small pupil cataract surgery and hopefully will assist cataract surgeons in dealing with these challenges.

A surprisingly high rate of complication and co-morbidities were found in this case series. Further innovations in dealing with zonular dehiscence, posterior capsule rupture, and dense cataracts need to be continually sought after.

I-ring is a useful tool in the armamentarium of cataract surgery. It is less traumatic to the pupil than its predecessors due to its softer material in 360o engagement of the pupil. It helps to maintain pupil dilation in small pupil cases relating to pseudoexfoliation, IFIS and femtosecond laser induced myosis.

This study illustrates that there are still challenges to be met in cataract surgery. Despite the technical advances with phaco fluidics, femtosecond laser, pupil expansion rings, dense cataracts with zonular problems and small pupils are still a challenge for cataract surgeons. Further research and innovations are still needed to address these problems.